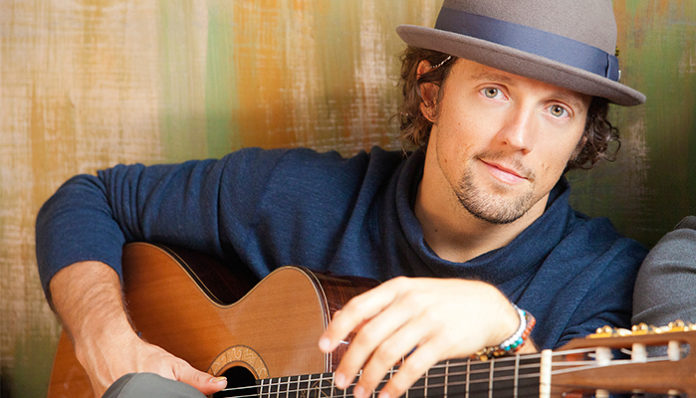 American singer-songwriter Jason Mraz first came to the attention of the public with his debut album, Waiting For My Rocket to Come (2002). A former student at New York City’s American Musical and Dramatic Academy, he moved to San Diego at the age of twenty two, following a road trip. Soon afterward, he joined a band called Elgin Park; it was then that he met Toca Rivera, his future bandmate. A regular performer at a local coffee house, Mraz quickly built a following both in-store and online. In 2001, he released Live at Java Joe’sーa live acoustic album which also featured Ian Sheridan on bass and Rivera on drums. The following year, the aspiring artist managed to secure a recording deal with Elektra Records, after which he began working on his debut album. Eventually that October, Mraz released his studio album, Waiting for My Rocket to Come, which successfully charted on the Billboard 200; it also spawned a top 10 hit, The Remedy (I Won’t Worry).

After the success of his initial effortーwhich later went on to attain Platinum certificationーthe singer-songwriter released his second studio album, Mr. A-Z in the summer of 2005 under Atlantic Records. While it didn’t rival the success of his debut, it still managed to sell over 500,000 copies domestically. Since then, Mraz has come out with a total of five full-length albums, fifteen music videos, fourteen extended-plays and seventeen singles. To date, his best-selling album is that of We Sing. We Dance. We Steal Things. from 2008; a major success, it became the singer’s first and only multi-platinum certified album. In terms of his singles, Mraz is probably most well known for his 4x Platinum-certified hit, I Won’t Give Up. Over the years, he has also collaborated with several other music artists such as JJ Lin, Travie McCoy, Hunter Hayes, Christina Perri, and Two Spot Gobi.

Like many musicians, Mraz has also delved into the realm of actingーalbeit occasionally. Back in 2004, he made his small screen debut in an episode of the music drama, American Dream. From there, it wasn’t until 2009, that he appeared as a minor recurring character in the musical series, The Fresh Beat Band. After a voice-over stint that saw him as “some guy with a hat” in Family Guy (2010), he made an appearance in the TV short, The Live Room (2014). Just last year, Mraz made a cameo in the comedy, Rockstar Parents (2016) and appeared in a made-for-television film called, Clinton Global Citizens Award (2016).

What has the two-time Grammy Award-winning musician been up to lately? Has he come out with any new music material as of late? Or has he been focusing on something else? What happened to Jason Mraz? Where is he now in 2018? 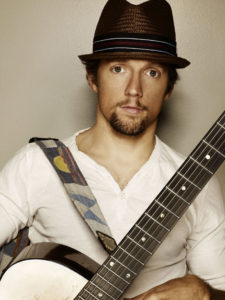 Born on June 23, 1977 in Mechanicsville, Virginia, Jason Thomas Mraz is the son of Tom and June Mraz; he is of Slovak and Czech descent. When he was five years old, his parents divorced; despite their split however, he had a fairly happy childhood. Growing up in Hanover Countyーa place which he’s described to have had “low crime, no drug use and a church on every street corner”ーhe spent most of his days playing outdoors.

As a teen, Mraz went to the local Lee-Davis High School, where he was a part of the school cheerleading team. Soon after, he went to New York City where he studied at the American Musical and Dramatic Academy; he later returned to Mechanicsville after a year. After taking on a series of odd jobs, he enrolled himself in Virginia’s Longwood University University. However instead of going to his classes, he embarked on a road trip which brought him to the western part of the country. Before long, he had arrived in San Diegoーa city which he later ultimately decided to stay in.

Shortly afterward, Mraz found himself joining a band called Elgin Park; it was then that he met future bandmate, Toca Rivera at a local coffee house called Java Joe’s, which was located in the Ocean Beach area of the city. Quickly becoming a regular, he performed weekly at the bistro for close to three yearsーconsequently, he had built up a loyal following both online and in San Diego. At the age of twenty four, he released a live acoustic album entitled, Live at Java Joe’s which also featured Ian Sheridan and Rivera on bass and drums respectively. Eventually in 2002, Mraz landed a recording deal with Elektra Records; with that, he started to focus his attention toward working on his debut album. 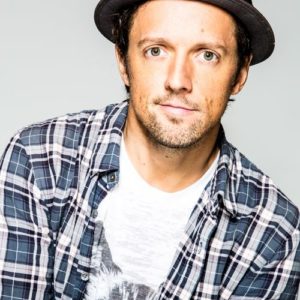 On October 15, 2002ーthe same year that he signed his recording contractーMraz released his debut album, Waiting For My Rocket to Come under Elektra Records. Produced by Grammy-Award nominated record producer John Alagia, it would be his first and only album release with the label. Boasting pop rock sounds, the album consisted of twelve tracks; some of the titles included: Who Needs Shelter, Sleep All Day, Absolutely Zero, Too Much Food, and The Boy’s Gone.

Considering Mraz’s songwriting abilities, it’s not surprising to know that he had written most of the songs presented in the album. A good debut effort, Waiting For My Rocket to Come peaked at number two on the US Heatseekers Chart and eventually made it to number fifty-five on the Billboard 200. Reviews on the album however, were generally mixed; for instance, Robert Christgau gave it two stars while critics at Allmusic gave it a modest three star rating. Nevertheless, it produced three singles: Curbside Prophet, You and I Both, and The Remedy (I Won’t Worry)ーthe last of which became a number one hit.

Following a switch of recording labelsーfrom Elektra to Atlantic RecordsーMraz released his second studio album, Mr. A-Z on July 26, 2005. Produced by Kevin Kadish, Josh Deutsch, and Steve Lillywhite, it featured twelve pop and alternative rock tracks including Did You Get My Message? (feat. Rachael Yamagata), Mr. Curiosity, O. Lover, Please Don’t Tell Her, and Song For a Friend. Once again, most of the album’s songs were written by the singer himself. A moderate success, it opened at number five on the Billboard 200ーwhich was a considerable improvement compared to that of his debut work. Noted for incorporating a blend of different music genres, it was later nominated for “Best Engineered Album” by the Recording Academy. Although opinions on the album were generally divided, it went on to produce two singles: Geek in the Pink, and Wordplay. As of July 2016ーover a decade after its initial release, Mr. A-Z has been certified Gold in the United States for exceeding over 500,000 copies in sales. 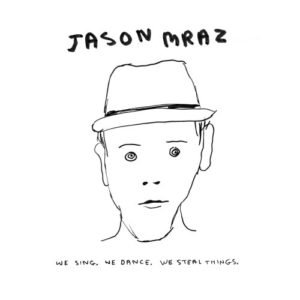 Three years later, Mraz dropped his third full-length album, We Sing. We Dance. We Steal Things. on May 12, 2008. Recorded in three separate studios in California, Tennessee, and England, videos on its process was documented and made available via an online Youtube series.

Produced by Martin Terefe, the pop rock album consisted of twelve songs, a few of which included: Love for a Child, Only Human, The Dynamo of Volition, If It Kills Me, and Butterfly. Mraz’s highest peaking album at the time, it settled in at number three on the US Billboard 200; it was also his first album to chart in other countries such as Argentina, Belgium, Australia, Spain and France.

Compared to his earlier efforts, We Sing. We Dance. We Steal Things was met with generally more favourable reviews. Lauded for its great-sounding tunes, it received a B+ rating from Entertainment weekly and a three and a half star rating from Allmusic; the general consensus from other publications such as The Boston Globe and Billboard was also positive. Eventually spawning three singles, the album had sold close to 1.5 million copies as of 2010, which garnered it Platinum accreditation from the RIAA. In 2008, We Sing. We Dance. We Steal Things. was re-released as a limited edition. 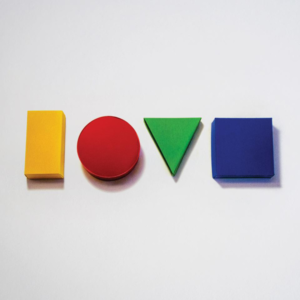 In the spring of 2012, Mraz released Love is a Four Letter Wordー his first studio album in four years. Featuring the production of Rick Nowels and Joe Chiccarelli, the artist himself described it to be a personal and melodic project with “different textures and tones”.

Containing mostly medium-tempo jams, with a few up-tempo beats, its thirteen-song track list consisted of the titles Everything is Sound, Living in the Moment, Who’s Thinking About You Now?, In Your Hands, and I’m Coming Over. In the United States, Love is a Four Letter Word debuted on the Billboard 200 at number twoーmaking it Mraz’s highest-charing album to date; during its first week, it sold a little over 102,000 copies.

Proving itself to be a chart-topper, the album later reached number one on both the US Digital Albums and the Top Rock Albums Charts; it also charted in several other countries across the globe such as Canada, Italy, Ireland, Germany and Belgium. Solidly put together, Love is a Four Letter Word garnered high praises from critics such as Sandy Cohen from The Boston Globe, and Caroline Sullivan from The Guardian. Since then, it has sold more than one million copies domestically, making it the singer’s second Platinum-certified album in the United States.

Two years later, his fifth studio album, Yes! was released in stores. Mraz’s fourth release with Atlantic Records, it ultimately served as a collaboration between the artist and members of the band, Raining Jane. Boasting fourteen tracks including Everywhere, Best Friend, Out of My Hands, and You Can Rely On Me, it opened at number two on the US Billboard 200 and sold approximately 102,000 copies within the first week. While some critics such as those from Billboard and Allmusic praised the album, some less-than-positive reviews came from sources such as the Los Angeles Times and the Rolling Stone. Nonetheless, it also saw success in Canada, Hungary, New Zealand, Norway, and many other countries. To date, Yes! has sold more than 400,000 units within the United States. 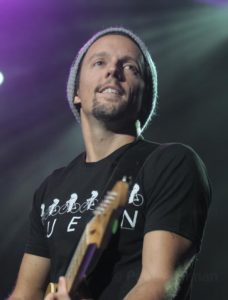 This year, the 39-year-old singer-songwriter will be making an appearance in a documentary called, Dreadtown (2017). Directed by Yonathan Gal, it will depict the story of Steel Pulseーa British reggae group that emerged from racial turbulence in the 70’s. Aside from Mraz, a number of other artists will also be guest-starring in the biopic including Snoop Dog, Leon, Matt Groening, Chad Smith, and Bill Idol. Filmed in Port-au-Prince, Haiti, the project is currently in post-production.

Aside from that, Mraz will also be co-starring in another documentary called Enormous: The Gorge Story (2017) which will revolve around the magnificent George Amphitheatreーone of the world’s most iconic venues for music. According to IMDb, it will also be starring Dave Matthews, Pat Monahan, Pat Coates and Steve Miller Band. Much like the other documentary, it is also in the post-production stages.

If you’d like to stay up-to-date and connected with the music star, you can do so by following Jason Mraz on social mediaーyou can find him on Twitter at @jason_mraz. As an alternative, you can also visit his official Facebook page over at @JasonMraz.