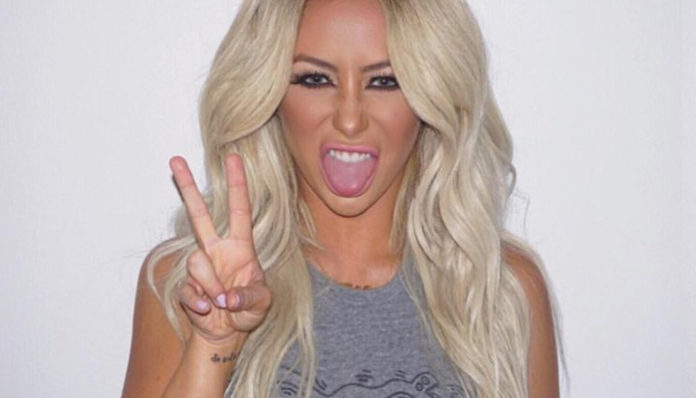 American singer Aubrey O’Day is best known as a member of the popular girl group, Danity Kaneーand more recently, as a part of the music duo, dumblonde. Having realized her love for the stage when she was five years old, the blonde spent most of her youth performing. As a young girl, she participated in many musical productions such as Fame, Grease, The Sound of Music, and The Wizard of Oz. Citing Sean Combs and The Notorious B.I.G. to be her primary influences growing up, she focused most of her attention on acting and auditions. After graduating from the University of California, her talents were discovered on the reality show, Making the Band 3 where she ultimately emerged as the breakout star. With that, she soon joined the resulting bandーnamed Danity Kaneーwhich also consisted of Aundrea Fimbres, Dawn Richard, Wanita Woodgett and Shannon Bex. Together, the girls released their eponymous debut album in the summer of 2006. A popular hit on store shelves, it quickly made its way to the top of the US Charts.

Two years later, the dance trio dropped their second full-length album, Welcome to the Dollhouse in 2008. While it didn’t rival the success of their initial effort per se, it did manage to rise to the top of the Billboard 200. Shortly afterwards, O’Day and her bandmates went their separate ways; it wasn’t until after they got back together in 2013 that they released their third and final album, DK3 in 2014. All in all, the girls had put forth seven singles, five music videos during their time together. One of the most popular girl groups of the 2000’s, Danity Kane won a handful of award including an Urban Music Award and three Online Hip Hop Music Awardsーthey even hold the Guinness World Record for being the first female band in Billboard history to have their first two albums debut at number one! Since then, the blonde beauty has formed an alternative dance duo called Dumblonde with Shannon Bexーalso a former member of Danity Kaneーwith whom she’s released a studio album with in 2015.

So what has the blonde beauty been up to in the recent months? What has she been occupying herself with lately? Does she have anything in store for fans this upcoming year? What happened to Aubrey O’Day? Where is she now in 2018? 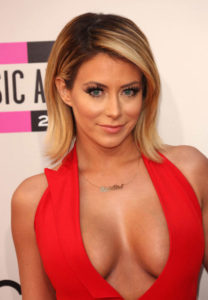 Born on February 11, 1984 in San Francisco, California, Aubrey Morgan O’Day began performing at the tender age of five. According to her mother, the blonde first realized her desire to perform at the age of four when she cried after watching The Nutcrackerーnot having been able to join the actors up on stage.

Thus, she began taking part in numerous musical productions during her grade school years such as Grease, The Wizard of Oz, The Sound of Music and Fame. As a child, she focused most if not all of her attention toward acting and auditions. In her teens, she went to La Quinta High Schoolーrenowned for their arts programーwhere she was a member of the dance team, the cheerleading squad and also the drama club.

Following her high school graduation, O’Day attended the University of California where she majored in drama and political science; during her time there, she was also a part of the Alpha Chi Omega sorority.  From there, she honed her skills briefly at Palm Desert’s McCallum Theater prior to taking part in MTV’s reality show, Making The Band 3. Originally premiered in the spring of 2000, the seriesーthe brainchild of Lou Pearlman, Jonathan Murray, Mary-Ellis Bunim and Andrew Marekーwas primarily a talent search; one in which the winners are offered a position in a band.

A contestant on Making The Band 3, O’Day was joined by twenty other celebrity hopefulsーfor their season, P. Diddy was on the lookout for members of a new female supergroup. With each episode, a handful of girls were eliminated; by the end of episode ten of the second season, O’Dayーalong with Wanita Woodgett, Dawn Richard, Aundrea Fimbres and Shannon Bex had emerged as the show’s winners, consequently earning themselves a spot in the band, which they later called Danity Kane. 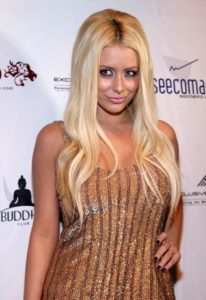 Following a few months of recording at Miami’s The Hit Factory Studio, O’Day and the rest of the girl group released their eponymous debut album, Danity Kane on August 22, 2006. Released under the Bad Boy Records label in the United States, it featured production from Sean Combs, and Harve Pierreーthe latter of whom served as Bad Boy’s vice president. Later made available in Switzerland and Germany in November 2006, the album boasted fifteen hip hop tracks including Heartbreakers, Hold Me Down, Press Pause, Touching My Body, Stay with Me, and Sleep On It; it also contained the title Show Stopper, which was a collaboration with American rapper, Yung Joc.

A major hit, Danity Kane debuted at number one on the Billboard 200 and sold more than 109,000 copies on the first day of release; it eventually went on to sell more than 234,000 units in its initial week. Soon afterward, it also climbed to the top of the US Billboard Top R&B. Outside of the United States, the album also made its way to the Swiss and German Album Charts where it settled at number eighty-three and number fifty respectively. Given a modest three star rating from critics at Rolling Stone Magazine, Danity Kane later saw the release of two singlesーShow Stopper and Ride For You. To date, the album has sold over one million copies domestically, earning it Platinum certification from the RIAA; it remains to be the band’s best-selling album.

Two years later, on March 18, 2008, the group released their second full-length album, Welcome to the Dollhouse. Recorded entirely in under five weeks, it was also the last to feature fellow member, D. Woods. Unique to the release, the girls had each helped to write a song for the album, one which they had thought to be suitable. For O’Day, she helped co-write the titles Strip Tease, Secret Place, and Picture This. Containing sixteen tracks, Welcome to the Dollhouse also included Pretty Boy, Sucka for Love, 2 of You, Key to My Heart, and Ain’t Going. 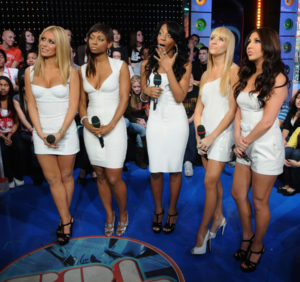 Another big hit for the girl group, the album once again debuted at the top of the Billboard 200ーselling approximately 236,000 units during its first week. With this feat, Danity Kane became the first female band in US Billboard history to have their two initial albums enter at number one. Similar to their previous album, Welcome to the Dollhouse later also peaked at number one on the US Top R&B.

Despite its charting success however, reactions on it were generally mixed; for instance, while Billboard gave the album a positive rating, other publications such as The Boston Globe and USA Today were less favourable in their reviews. Nonetheless, it went on to make two singles including Damaged and Bad Girlーthe first of which would go on to become their first and only Platinum certified single. As of April 2008, the album has received Gold certification from the RIAA for exceeding 500,000 units in sales.

Despite the fact that the group had planned on working on their next studio album, Danity Kane ultimately went their separate ways in 2009. Allegedly, only two of the five members had returned for the next season of Making the Band although all the women were invited. From there, it wasn’t until 2013ーfour years after this disbandmentーthat they began talking about the possibilities of a reunion. Finally at the Video Music Awards that year, it was announced that Danity Kane, with the exception of D. Woods, would be returning to the music scene once again. Unfortunately for fans however, a fight between O’Day and Richard led the group to once again go their separate ways in the summer of 2014. Still, it was announced that they would still be releasing their third album as a thank you to their loyal fans.

Under Stereotypes Music and Mass Appeal, they released their final studio album, DK3 on October 27, 2014. The first effort in six years, it featured the production of Dem Jointz and The Sterotypes. Similar to their earlier albums, it contained many hip hop tracks including All in a Day’s Work, Rhythm of Love, Secret Lover, Two Sides, and Bye Baby; it also featured a collaboration with American rapper, Tyga in Lemonade. Met with critical acclaim upon its release, DK3 received applause from both critics and fans alike. Lauded for its high production values and pulsing beats, it received near perfect scores from numerous critics including those from the LA Times, FDRMX, and SoSoGay. Hailed as a superb album, it made its way onto a handful of chartsーfor instance, it ranked number one on the Top Current Albums Chart, at number three on the UK R&B Albums Chart, at number six on the Independent Album sChart and at number seven on the Top R&B.

In 2015, the blonde formed an alternative dance pop duo with Shannon Bex called Dumblonde. Signing with the Double Platinum label, they released their self-titled debut album, Dumblonde on September 25, 2015. Produced by Dem Jointz and R8DIO, it featured eleven tracks, most of which were cowritten by O’Day; a few standouts include White Lightning, Carry On, Tender Green Life, You Got Me, and Dreamsicleーall of which were eventually released as singles. A modest success, it debuted on the Billboard 200 at number 129 and sold a little over 5000 copies in the first week. 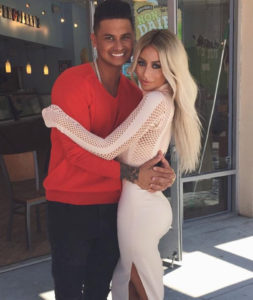 Just recently, it was announced that the 32-year-old blonde is currently filming a new reality show with none other than her fiancee, Pauly Dーwhom she met on the set of Famously Single. According to reports, the series will be one in which “the end game is marriage”. Currently in the pilot stages, the show will be produced by Bunim/Murray Productionsーthe same people who created Keeping Up with The Kardashians. When will the two tie the knot? We’ll just have to tune in and see…

If you’d like to stay up-to-date with the singer and reality star, you can easily do so by following Aubrey O’Day on social mediaー luckily for us fans, you can find her both on Twitter and Instagram under the handle @aubreyoday.