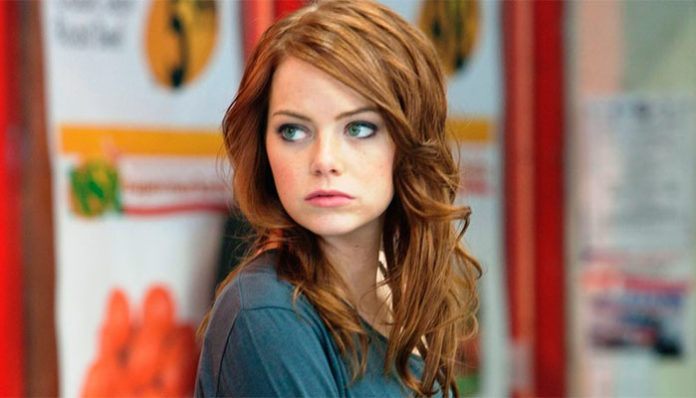 One of the highest-paid female actresses in the world, Emma Stone first received international recognition in the teen comedy, Easy A (2010). Drawn to acting ever since she was a young girl, she made her debut in a production of The Wind in the Willows when she was eleven years old. Several roles on-stage later, she relocated to the country’s entertainment capital, Los Angeles. Around that time, her parents also enrolled her in private acting lessons, in hopes of honing her skills. In 2004, the aspiring actress received a break when she came out as the winner of a reality show called, In Search of the New Partridge Family. As the winning contestant, she received a role in a modern remake of a 70’s sitcom. As it happened however, the series never made it past the pilot; nonetheless, it marked the starting point for her career. Following that, she appeared in a television series for the first time in Medium (2005), and The Suite Life of Zack and Cody (2006), in which she played a couple of minor characters.

At the age of nineteen, Stone was cast as a series regular in the adventure crime series, Drive (2007); however it ultimate proved to be short-lived. Later that same year, she also made her motion picture debut in the film, Superbad (2007), alongside Jonah Hill and Michael Cera. Not long afterward, she received her first starring role in the music comedy, The Rocker (2008)ーone which required her to learn how to play the guitar. From there, Stone appeared in a string of movies including The House Bunny (2008), Ghosts of Girlfriends Past (2009), Paper Man (2009), and Zombieland (2009). In 2010, the actress received the big break that she’d been waiting for when she was cast as the main lead in the teen comedy flick, Easy A. A major success at the box office, it received numerous praisesーmany of which were directed toward Stone’s breakthrough performance.

Since then, Stone has co-starred in a number of films such as Friends with Benefits (2011), The Help (2011), The Amazing Spider-Man (2012), Gangster Squad (2013), The Amazing Spider-Man 2 (2014), Birdman or (The Unexpected Virtue of Ignorance), to name a few. Off the big screen, she has also made a handful of appearances on television; for instance, she has guest starred in Robot Chicken (2011), 30 Rock (2012), iCarly (2012), Saturday Night Live (2015), and Maya & Marty (2016). To date, the Oscar-nominated star has accumulated over forty credits to her name in the industry; her work in the show business has also led her to amass more than forty-five different awards.

So what has the decorated actress of Easy A fame been up to lately? What are some of the new roles that she’s been offered recently? What happened to Emma Stone? Where is she now in 2018? 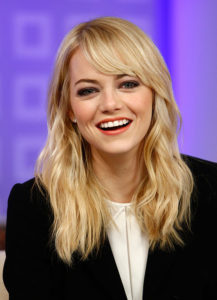 Born on November 6, 1988 in Scottsdale, Arizona, Emily Jean Stone is the daughter of Jeffrey Charles and Krista Jean Stone, the CEO of a contracting company and a homemaker; she has a younger brother named Spencer and is of Irish, Scottish, German and English descent.

A colicky infant, she cried frequently and as a result, developed calluses and noodles on her vocal chords. Self-described as a “bossy” and “loud” child growing up, she went to Sequoya Elementary School and later attended Cocopah Middle School, where she was an all A’s student. Despite the panic attacks that she often received as a young girl, Stone had always been drawn to the art of acting. Although she was interested in sketch comedy initially, she later turned her attention toward musical theatre. After many years of voice lessons, the aspiring performer played a lead role in a production of The Wind in the Willows.

Later home-schooled, she went on to appear in over a dozen different stage productions including Joseph and the Amazing Technicolor Dreamcoat, The Princess and the Pea, and Alice’s Adventures in Wonderland. Eventually wanting to relocate herself in the country’s entertainment capital, she relocated to Los Angeles with her mother. Shortly after moving to the new city, she began taking private acting lessons with a local coach. While she attended auditions, she also worked park-time at a pet store and took online high school classes. Finally at the age of sixteen, Stone received a big break when she participated in a VH1 reality series, In Search of the New Partridge Family (2004) and came out as the winner. Despite having won a role in the resulting TV show, The New Partridge Family (2004), the series ultimately proved to be short-lived as it never went past the pilot.

After a couple of unsuccessful auditions, Stone landed a small role in the crime drama, Medium (2006). She later also appeared in The Suite of Zack and Cody (2006), Malcolm in the Middle (2006), and Lucky Louie (2006). In 2007, the young actress was selected to be a series regular in the adventure series, Drive; due to low ratings however, it was ultimately cancelled after just seven episodes. From there, she made an appearance in the film Superbad (2007) prior to securing a starring role in the music comedy, The Rocker (2008) where she played alongside Josh Gad and Rainn Wilson. Throughout the rest of the 2000’s, she appeared in a strong of movies including The House Bunny (2008), Ghosts of Girlfriends Past (2009), Paper Man (2009), and Zombieland (2009). 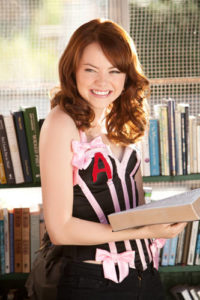 In 2010, Stone received a huge breakthrough with the teen comedy Easy A, in which she was cast as the lead character. Inspired by The Scarlet Letter written by author Nathaniel Hawthorne, it revolved around a 17-year-old teen named Olive Penderghast who uses her school’s rumour mill in order to advance her social standing after word about one of her lies gets out. Filmed in Ojai, California, the movie starred Stone has Olive; joining her in the main cast were Penn Badgley, Amanda Bynes, Aly Michalka, Dan Byrd and Thomas Haden Church.

Originally released in theatres on September 17, 2010 after premiering at the Toronto International Film Festival, Easy A was met with critical acclaim; Stone’s performance in particular, received much praise from film critics. A smash hit at the box office, it earned over $6.7 million on its opening day and later took in more than $17.7 million during its opening weekend. By the end of its run, the movieーwhich was produced on a $8 million budgetーhad earned more than $75 million worldwide. Lauded for her incredibly acting, the comedy effortlessly launched the actress into celebrity status. In fact, her portrayal of Olive was later named as “One of the Top 10 Movie Performances of 2010” by Time Magazine. Nominated for a Golden Globe Award for “Best Actress in a Motion Picture Comedy”, the film also garnered Stone an MTV Movie Award and a Teen Choice Award. 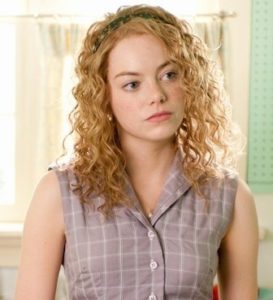 Next, she was cast as one of the main leads in the period drama film, The Help (2011). Adapted from a novel of the same title, it revolved around a young white woman named Eugenia Phelan and her two black maids, Minny Jackson and Aibileen Clark during the 60’s Civil Rights era; an aspiring journalist, Phelan eventually decides to write a novel from the point of views of her maidsー”The Help”, subsequently exposing the racism that they are forced to work through.

While Stone portrayed the role of the writer, actresses Octavia Spencer and Viola Davis played the roles of Minny and Aibileen respectively. Other members of the talented cast include Jessica Chastain, Allison Janney, Bryce Dallas Howard and Ahna O’Reilly.

Picked up for distribution by Walt Disney, The Help screened in theatres on August 10, 2011. Proving itself to be popular amongst theatre-goers, it earned $5.5 million on its opening day, taking the number one spot at the box office. By the end of its initial weekend, the film grossed approximately $26 million; following its run, it had taken in a total of $216.6 millionーa massive amount against its production budget of $25 million. Met with favourable reviews, many criticsーsuch as Connie Ogle of The Miami Herald and Tom Long from The Detroit Newsーpraised the film for its powerful story-telling. Although some individuals criticized The Help for its deviations from the original novel, the general consensus was overwhelmingly positive. As a cast member of the Academy Award-winning film, Stone received a Gold Derby Award and a Screen Actors Guild Awardーboth for the category of “Best Ensemble Cast”.

A few years later, Stone played a supporting role in the Oscar-winning black comedy, Birdman or (The Unexpected Virtue of Ignorance) (2014). Directed by Alejandro G. Inarritu, it centered around Riggan Thomson, a faded Hollywood star who is best known for having played the superhero, “Birdman” in the past; the film ultimately focuses on him trying to adapt one of Raymond Carver’s short stories into a Broadway play. In the satirical film, Michael Keaton played the former actor while Stone portrayed the role of his daughter, a recovering drug addict; the two are joined by Zach Galifianakis, Edward Norton, Andrea Riseborough and Amy Ryan in the movie.

Following an initial screening at the Venice Film Festival, Birdman or (The Unexpected Virtue of Ignorance) was released nation-wide in the United States on November 14, 2014. A critical success, it went on to earn more than $103 million in ticket salesーclose to six times that of its budget of $18 million. Included in many critics’ top ten lists, it won four Academy Awards during the 87th annual ceremony. For her outstanding portrayal of Riggan’s estranged daughter, Stone was also nominated for the “Best Supporting Actress” category. In addition, she also received a Golden Globe award nomination for “Best Performance by an Actress in a Supporting Role”, amongst a few other recognitions. 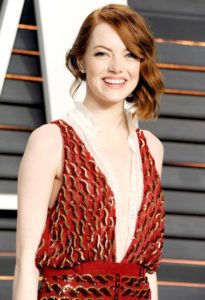 This year, Stone will be starring as Billie Jean Kingーa professional tennis player in the biopic comedy, Battle of the Sexes (2017), opposite of Steve Carrell. Directed by Valerie Faris and Jonathan Dayton, it will be depicting the real-life tennis match between King and Bobby Riggs from 1973. The cast list also includes Elisabeth Shue, Andrea Riseborough, Jessica McNamee and Sarah Silverman.

In addition to that, one of the actress’ upcoming projects includes Cruella (2018)ーa live-action film that will be centring around Cruella de Vil, the infamous villain from Disney’s 101 Dalmations. Directed by Alex Timbers, it has been announced that Stone will be playing the part of the title character; the rest of the cast-list however, has not yet been released.

A couple of Stone’s other forthcoming works includes the TV series, Maniac (2017), and the historical film, The Favourite (2018).

Unfortunately, it doesn’t look like the Academy Award-nominated star is on social media (as of yet anyway)ーas an alternative, you can keep up-to-date with her latest roles on her official IMDb page.