Steven Blustein and his partner Sean Knecht met in grade school, bonding over their mutual love of dogs. Years later, as dog owning college students, they wanted more for their precious puppies then what was available in stores. They formed Pridebites Pet Products and created a toy that was inspired by their school’s sports logo. They made 500 of them, and managed to sell out of the Pridebites Dog Toy – but would they manage to impress the Sharks? Let’s take a look. 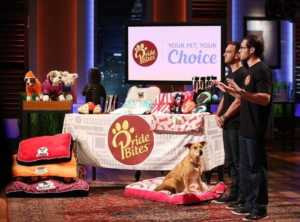 Steven Blustein and Sean Knecht walked out into the Shark Tank, and onto the stage. They introduced themselves to the Sharks as the founders of PrideBites Pet Products. That’s the Sharks for $200,000 in exchange for 10% Equity stake in their company. Steven told the Sharks that if they were anything like the entrepreneurs, their pet was the most important member of their family. Steven believes that should be spoiled in a unique way and things that they can do that with Pridebites. Pridebites allows customers to design, and buy anything that they wanted for their puppies.

Sean gestured to his dog, Sadie, on the stage. She was wearing a custom collar and leash. He claimed that the customization made her feel like man’s best friend. Sean explains that the customization process was very easy for the customer. The customer could go on the website, pick the products that they would like to customize, and then choose the size, color, pattern and the design of their choice. The item was finished by including a custom paw print with the pets name or even a hand-drawn portrait of your pet. Lori looked amused. Sean said that it would take a few weeks, but the customized item would be delivered straight to the customer store. Steven cut in to ask which one of the Sharks would be ready to get their paws dirty and invest in Pridebites Pet Products.

After Sean had asked his dog to give him a high 10, the Shark started talking about the business aspects of Pridebites Pet Products. Steven said that they were going to hand out samples that they specially made for each of the Sharks. Sean went around and handed the samples out with the dog in tow. Daymond to ask what the dog’s name was, and Steven told him that it was Sadie. Robert got up to pet the dog, saying that she was adorable. He apologized and sat back down. Sean handed him a red and white blanket with a picture of Roberts dog Lola on it. Robert grinned and showed the sheet to the rest of the Sharks. He looked impressed.

Sean handed out the rest of the samples. Lori turned hers over and asked if it was a toy. Kevin looked impressed and said that the toys were very attractive. Or it showed her to the camera and realized that it was a frisbee that had her face on it. Robert was still standing up and said that the picture on the blanket looks just like his dog Lola. Steven explains that it was a picture that they took off the internet, And then had the picture hand drawn by one of their designers. Robert said that that was very cool. Daymond took his toy and Squeezed it, making a squeaky sound.

Robert wants to know what the price range to get the customized products was. Sean explains that the prices ranged from $9.99 up to $150. Mark asked if they were essentially Shutterfly but for pet products. Steven agreed but said that they differed from Shutterfly because they customized everything from scratch. Sean said that if you picked a red blanket, you could customize the trim and then put the monogram in. Daymond asked if he’ll order today when would he get his products. Steven explained that the turnaround time is within four weeks at the moment. They had Solutions and plays to get that time down to a week or two. Lori asked where they were manufacturing out of. Steven said that everything was done overseas, and they build a proprietary system which allows them to organize the customization process and also scale efficiently. He claimed that people would not usually be able to deliver margins to the consumer with customized products, but they’ve built a system to allow the factories to work seamlessly through the customization process.

Robert asked them to walk the Sharks through the margins. Steven said that the margins were 50% landed to the consumers. He stated that they’ve been in business for about two and a half years, and they’ve sold 1.4 million dollars and products. He said that they were on track to do 1.3 million dollars that year. The Sharks all seemed impressed. They congratulated the entrepreneurs on their sales today. Robert asks them if it was all online. Steven said that it wasn’t, and Mark and Kevin look disappointed. Steven explains that they also had the sales with brands and retailers as well which make up about 70% of their sales.

Daymond and Mark needed an explanation for where 70 percent of their sales were coming from. Steven explains that 70% was to brands and retailers that wanted a customized product for their stores. They’ve been prototyping kiosks where customers could come in and to the store and customize products on the spot. Robert claims that they wouldn’t be able to make 50% margins on retail products. He asked what the margin on that was. Steven said that the retail margin was 40 points, which still wasn’t bad.

Lori asked how they came up with the idea. Steven told her that they started in their college apartment where they sold the dog toys door to door. They started off with the dog toy called Pride Bites which won dog toy of the year. While they are going through this presentation, Robert was playing with Sadie. Sean explains that the pride by it was machine washable, and it was able to float and squeak. Sean claimed that it was one of the most versatile toys is on the market today.

Mark told them that they’ve done a great job so far, but said that there is no barrier to other people entering into the same space. He said he thought it would be a very challenging business to maintain. He didn’t think that he could help them scale, so Mark went out. Kevin told them that he thought then their valuation was too expensive because it was a customized come onto the toy. He said that the cut Toy Market was pretty large, and he thought that dog pizza slices were not going to fit into his portfolio. Kevin stated that he wasn’t moved by the product, so he also went out. Lori pointed out that they haven’t been selling much online, but the unique thing about the business is the customization. Sean explains that once they launched their online business, they were able to sell 3500 orders in 90 days. Robert said that they needed to do more online. And the two entrepreneurs agreed. Stevens stated that they switch their focus to online rather than the retail stores since they already knew that they could sell retail.

Robert said that he likes that they figured out how to do small-scale runs of their products efficiently. Robert continued, saying that the time frame was a bit of a problem and he didn’t think that people were that patient. Steven stated that they were starting to make that shift now, but Robert cut him off saying that he got it already. Robert stated that he thought that he could help them with that. Robert offered them $200,000 in exchange for 20% of the business. Steven thanked him for his offer, but before they could accept Daymond cut in.

Daymond said that he was very impressed with what they’ve done so far. He told them that his biggest challenge was the lack of online presence. He stated that he didn’t want to go into the area of selling tchotchke stuff in stores. He indicated that he didn’t think it was for him, and he went out. Steven asked if Robert was willing to negotiate on the equity and come down to 15%. Lori pointed out that she hadn’t made an offer yet. Lori said that she wanted to make an offer because she liked the look of their product. She thought everything was very cute. She stated that she’d sold a lot of personalized things, and she knew that her customers like to personalize. For you offered them $200,000 in exchange for 18% of the company. Robert took in a heavy breath, Sean and Steven looked at them, and ask Robert if there was a counter that he would like to make.

Sean asked if they would be willing to join together for $300,000 in exchange for 20%. Robert said that he would be prepared to do it for 30% at the $300,000 level with Lori. Lori agreed that she would do the deal. Steven said that if they could come down to 20%, they would do the transaction right now. Robert countered with 200000 / 20% for both sharks Stephen considered and then said that they had a deal. Lori told them to wait. She didn’t look sure that she wanted to do the new deal. Kevin cut in and said that if Lori didn’t want to do it, he would join in, but Lori jumped up and stated that she was in. So how have they done since getting an investment? Let’s take a look.

Pridebites Pet Products Now in 2018 – The After Shark Tank Update 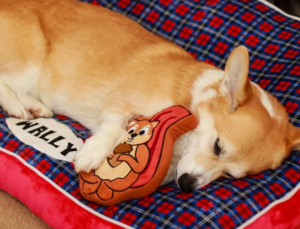 According to their blog, Pridebites Pet Products has introduced 10 new products since appearing on Shark Tank. Some of the new products include a doggie varsity jacket, Emoji balls, toy baskets, sleeveless hoodies for your puppy, A Sriracha bottle shaped toy as well as placemats and a crate bed. Their blog also states that they sold over 200,000 products this year. That sales number means they probably surpassed their sales projections of 1.4 million dollars for this year. If you would like to spoil your pet rotten, you can visit the Pridebites Pet Products site here.