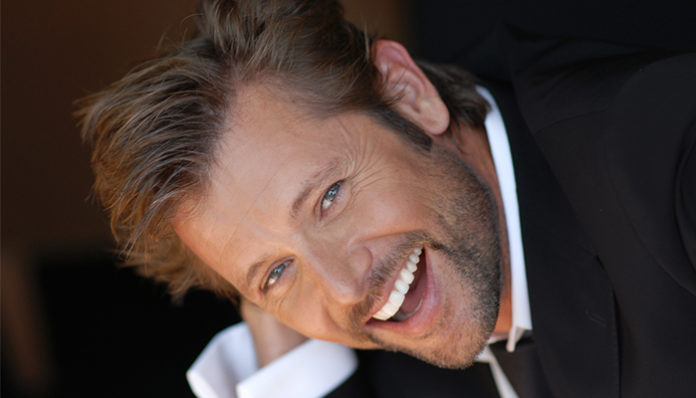 Michigan-born actor Grant Show is probably best known for his portrayal of Jake Hanson in the soap opera, Melrose Place (1992). Ever since he caught the acting bug as a teen, Show has had his eyes set on becoming a star. A theatre arts major at UCLA, it was during his last year there as a student that he landed a recurring role in the romance drama, Ryan’s Hope (1985)ーone which ultimately garnered him a Daytime Emmy Award nomination and a Soap Opera Digest Award nomination in 1987 and 1986 respectively. Later wanting to further hone his craft, he headed off to London where he studied acting at the prestigious Academy of Music and Dramatic Arts. Eventually returning to the United States in the late 1980’s, Show appeared in a handful of television series including When We Were Young (1989), True Blue (1989), and Lucky Chances (1990). Having accumulated a few years of experience, the aspiring artist soon received an opportunity of a lifetime when he was cast as a main lead in the Fox series, Melrose Place (1992). Critically acclaimed, it effortlessly propelled Show into the path of stardom.

During his time on the soap, the actor also made several guest appearances in Burke’s Law (1994), Models Inc. (1994), Saturday Night Live (1995), Pretty Poison (1996), and Mother Knows Best (1997). Since then, Show has starred in multiple TV films and series including Ice (1998), Six Feet Under (2002), Encrypt (2003), Sex and the Single Mom (2003), Beautiful People (2005). In the winter of 2005, he also played a series regular in the crime drama, Point Pleasant alongside Elisabeth Harnois, Samuel Page, Aubrey Dollar and Dina Meyer. More recently, he has taken on principal roles in Accidentally on Purpose (2010), Devious Maids (2013), and The Family (2016). Having established a name for himself in the industry, Show has appeared in well over sixty different projects throughout his multi-decade long career.

So what has the actor of Melrose Place fame been up to recently? Is he still sincerely focused on his acting career? If so, what are some of his latest projects? What happened to Grant Show? Where is he now in 2018?

Grant Show’s Early Life and Entrance into the Show Biz 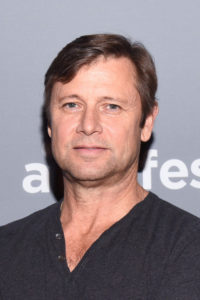 Born on February 27, 1962, in Detroit, Michigan, Grant Alan Show is the son of Kathleen McMillion and Ed Show. When he was still a two-year-old toddler, his familyーalong with his older sister, Kellyーrelocated to Northern California in search of a better life. As a teenager, Show attended Samuel Ayer High School; it was there that he first caught the acting bug. Following his graduation, he went to the University of California Los Angeles where he majored in theatre arts. Just a year into his studies however, Show received a breakthrough when he landed a recurring role in the ABC soap opera, Ryan’s Hope.

Created by Paula Avila Mayer and Claire Labine, Ryan’s Hope centred around the lives of a large Irish-American family in New York City’s Washington Heights neighbourhood. A long-running series, it originally premiered on July 7, 1975; however it wasn’t until the fall of 1985, that Show joined the show. Making his debut on episode 1.2636, the actor played the part of Rick Hydeーa young man who joins the police force after graduating from high school; he is later promoted to detective, after which he elopes with his high school sweetheart. One of the most popular soaps on television at the time, Ryan’s Hope attracted millions of viewers every week. Well-received, many audience members praised it for its character-driven story lines and talented actors. During the course of its fourteen year run, it won numerous awards including sixteen Primetime Emmy Awards. Although it was his first major on-screen role, Show’s dazzling performance on Ryan’s Hope also earned him an Emmy Award nomination for “Outstanding Younger Leading Man in a Drama Series”.

After his time on the soap opera was over, Show decided to take a year sabbatical to hone his craft at the Academy of Music and Dramatic Arts in Londonーit wasn’t until the late 80’s that he returned to the United States to resume his burgeoning career. Upon his return, he landed a role in the TV film, When We Were Young (1989). From there, he eventually secured a recurring part in the series, True Blue (1989) where he took on the role of a police officer. Over the next couple of years, Show continued to showcase his acting in a handful of shows including Lucky Chances (1990, Treacherous Crossing (1992), and Coopersmith (1992); ultimately, it was his appearances in said series that he captured the attention of TV producer, Aaron Spelling. Recognizing his talent and potential, he soon cast him in as a guest star in his popular drama, Beverly Hills 90210ーa role which eventually lead to him being a series regular in his eventual spin-off, Melrose Place. 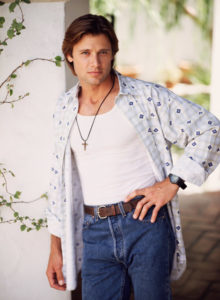 Created by Darren Star and produced by Aaron Spelling, Melrose Place premiered just two months following Show’s guest appearance on Beverly Hills 90210, on July 8, 1992. Filmed in Santa Clarita, California, it chronicled the lives of those living in Melrose Placeーan apartment complex located in West Hollywood. Playing the role of one of the main leads, Show starred as Jake Hanson, a “bad-boy biker” who is noted for having a tough side; he opens up his own motorcycle shop in the beginning of the series. Aside from Show, the cast list also featured Josie Bissett, Thomas Calabro, Doug Savant, Andrew Shue and Courtney Thorne Smithーall of whom played the part of a main cast member.

An instant hit, the series garnered over 16 million viewers for its debut episode. Although viewership ratings steadily declined as the show went on, it still managed to attract over ten million viewers for each of its seasons; during its series finale, Melrose Place was watched by 10.38 million audience members. Despite its popularity amongst viewers however, it was generally met with mixed reviews from critics; while some panned it for its thin plot lines, others praised it as a delightful form of “escapism”. Although Show left the series back in 1997 (it later ended in 1999), the Golden Globe-nominated series remains to be one of his most remembered roles on TV.

In 2002, Show appeared in yet another critically acclaimed television series, Six Feet Under. Originally premiered on June 3, 2001, it revolved around the lives of the Fisher’sーa family who runs a Los Angeles funeral home. Hailed as one of the greatest dramas of all time, it consistently garnered high ratings during its run and has been highlighted by many publishers including Empire Magazine and Time Magazine. Unlike his time on Melrose Place however, Show did not play a lead role in Six Feet Under; instead, he was cast as Scott Axelrodーa character who appeared for a three-episode arc during the second season. In terms of its main cast, it starred Peter Krause, Michael C. Hall, Lauren Ambrose, Frances Conroy, Matthew St. Patrick, and many others. 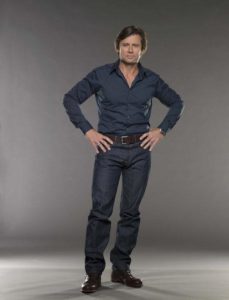 A handful of TV films later, the actor was cast as a series regular in the Fox series, Point Pleasant (2005). Created by Marti Noxon and John McLaughlin, it centred around a young girl who after washing up on shore during a violent storm, is resuscitated and later taken in by the family of a doctor; she then attempts to discover her true identity throughout the course of the series. While actress Elisabeth Harnois portrayed the role of said character, Christina Nickson, Show played the part of Lucas Boydーsomeone who is later revealed to be the half-demon guardian of the girl; other members of the main cast includes Samuel Page, Aubrey Dollar, Clare Carey and Cameron Richardson.

Due to the fact that Point Pleasant was produced by Marti Noxonーwho worked on the popular series, Buffy the Vampire Slayerーthe show drew in many initial fans. Despite this however, its viewership ratings eventually began to decline as the episodes pressed on. Although it received many praises for its subtle use of special effects and gothic tone, Point Pleasant was ultimately cancelled in March 2005.

More recently in the 2010’s, Show co-starred in the ABC comedy, Devious Maids (2013). The brainchild of Marc Cherry, its premise revolved around a group of close-knit Latina maidsーall of whom dream of one day working for Beverly Hills’ rich and famous. Aside from the five maids, who were played by Ana Ortiz, Roselyn Sanchez, Dania Ramirez, Judy Reyes and Edy Ganem, the show’s ensemble cast also included Rebecca Wisocky, Tom Irwin, Susan Lucci and Brianna Brownーof course, Show also played a main lead in the series. In it, he portrayed the role of Spence Westmore, one of the maids’ employees who is also a daytime soap star. Met with glorious reviews, Devious Maids received countless praises during its runーmany of which were directed towards its distinctive characters and huge star cast. Hugely popular, it continued for four seasons, from 2013 until 2016; by the time it ended, it had been on air for 49 episodes. In October 2016, it was announced that Devious Maids will not be returning for a fifth season as its cast options had expired.

These past few months, Show has made a number of appearances in the ABC thriller, The Family (2016). Premiered on March 3, 2016, the series focused on a mayor’s son, who mysteriously returns to the fictional city of Red Pines, Maine after being presumed dead over a decade earlier. On its third episode, the actor joined the castーwhich consisted of Joan Allen, Alison Pill, Margot Bingham and Rupert Gravesー as Democratic Governor Charlie Lang. In total, his character appeared in ten episodes. Due to low ratings however, The Family was cancelled in May of 2016 after a single season.

Aside from that, he’ll also be making a brief appearance as a celebrity guest in the upcoming film documentary, Everybody Has an Andy Dick Story (2017).

If you’d like to stay up-to-date and connected with the actor of Melrose Place fame, you can do so by following Grant Show on social mediaーyou can find him on Twitter at @GrantNoShow.