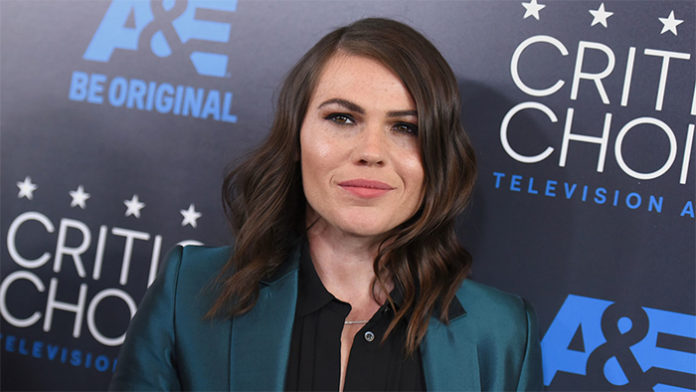 American actress Clea DuVall is best known for her portrayal in the HBO drama mystery, Carnivale (2003). Although she was noticeably shy as a child, her dream was always to become an actress. A former student at Los Angeles’ High School of the Arts, she made her official acting debut in the television series, Dangerous Minds (1996) at the age of nineteen. Throughout the late 90’s, DuVall appeared in a series of films and television shows including Little Witches (1996), ER (1997), Crisis Center (1997), On the Edge of Innocence (1997), Buffy the Vampire Slayer (1997), to name a few. Several guest roles later, the aspiring actress received a breakthrough role in the teen horror film, The Faculty (1998) as a goth student. A hit at the box office, it played a major part in the launching of Duvall’s career. From there, she went on to star in the movies Wildflowers (1999), But I’m a Cheerleader (1999), and See Jane Run (2001). In 2003, DuVall was given yet another huge opportunity when she was cast as one of the main leads in the HBO fantasy series, Carnivale.

Well received by audiences, the HBO drama brought the actress to a new level of industry stardomーin fact, her role on the show later earned her a Women’s Image Network Award in 2005. Moving forwards with her career, Duvall eventually appeared in the television series Heroes (2006), Grey’s Anatomy (2008), The Event (2010), The American Horror Story: Asylum (2012), and The Lizzie Borden Chronicles (2015). During that time, she also starred in various films such as Argo (2012), Armed Response (2013), Your Right Mind (2014), and Zen Dog (2014)ーthe first of which garnered her multiple awards including a Screen Actors Guild Award, a Palm Springs International Film Festival Award, a Hollywood Film Award, amongst a number of nominations. A veteran actress of twenty years (and counting), DuVall has dazzled viewers with her acting talents in well over seventy different roles throughout her professional career.

On-screen, she has also been featured in sundry TV specials such as Red Desert Nights (2001), A Powerful Rage: Behind ‘The Grudge’ (2005), Argo: Absolutely Authenticity (2013), and Made in Hollywood (2016). Aside from her work in front of the camera, DuVall has also contributed to a handful of projects behind the scenesーmore specifically as an executive producer and a director. For instance, she helped produce and direct Tegan and Sara’s Heartthrob: The Interviews (2013), Armed Response (2013), Tegan and Sara: BWU (2016), and The Intervention (2016)ーthe last of which she also starred in as an actress.

So what has the raven-haired beauty been up to since then? In what direction has her recent career brought her? What are some of the latest roles that she’s picked up on-screen? What happened to Clea DuVall? Where is she now in 2018? 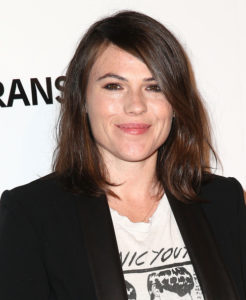 Born on September 25, 1977 in Los Angeles, California, Clea DuVall (Birth Name: Clea Helen D’etienne DuVall) is the daughter of Stephen and Rosemary DuVall, the former of whom is also an actor. Growing up, her early life proved to be full of challengesーwhen she was twelve years old, her parents divorced; not feeling at home with her mother and newly-married husband, she got her own apartment after dropping out of high school.

An only child, DuVall spent many hours in front of the television when she was a young girl; she was noted for having memorized entire dialogues from movies. Although she was rather shy, her dream was always to become an actress. Following through with her aspirations, she eventually went to Los Angeles’ High School of the Arts in her late teen years. Due to having to support herself however, her time spent in school was minimal; thus, her grades suffered as a result.

Nonetheless, DuVall’s commitment and perseverance ultimately brought her past the hurdles. Not long after her graduation, she landed her first television role in the drama series, Dangerous Minds (1996). That same year, she also made her feature film debut in the horror thriller, Little Witches (1996). Continuing to attend auditions, the aspiring actress later appeared in ER (1997), Crisis Center (1997), On the Edge of Innocence (1997), Buffy the Vampire Slayer (1997), and The Defenders: Payback (1997). On the big screen, she also made a number of minor appearances in Niagara Niagara (1997), The Alarmist (1997), How to Make the Cruelest Month (1998), and Girl (1998). A handful of minor parts later, she received a breakthrough when she was cast as one of the main leads in the science fiction horror movie, The Faculty (1998). 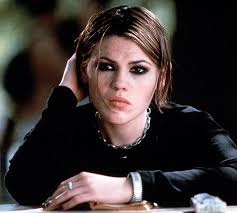 Her first major role on film, The Faculty gave the actress a much-needed opportunity to showcase her acting talents. Written by Kevin Williamson, it starred DuVall as Stokely Mitchellーa high school student who is known for being the self-styled outcast; as the movie presses on however, she along with her newly found friends, begin to suspect their high school teachers of being extraterrestrials after a series of bizarre occurrences. Alongside DuVall, Elijah Wood, Jordana Brewster, Shawn Hatosy, Josh Hartnett, and Laura Harris also took on the roles of the main protagonists.

Screened in theatres on December 25, 1998, The Faculty grossed over $11.6 million and ranked at number five at the box office in its opening weekend. By the end of its run, it had taken in over $40.3 million domestically. In spite of its commercial success however, it was met with generally mixed reviews; while some viewers enjoyed its familiar story, others panned it for being a “rip-off of other thrillers”. Despite this, the movie went on to receive multiple award nominationsーtwo of which were directed towards DuVall (e.g. Teen Choice Award for “Breakout Star” and Blockbuster Entertainment award for “Favourite Female Newcomer).

The following year, DuVall returned to the big screen in the psychological drama film, Girl Interrupted (1999). Based loosely on a memoir of the same name, it chronicled a young woman’s stay at a mental institution after she attempts suicide. While Winona Ryder played the part of the troubled eighteen year old, Susanna Kaysen, DuVall portrayed the role of a pathological liar named Georgina Tuskinーone of the many individuals whom she befriends at the wards; she is also Kaysen’s roommate. Amongst her circle of friends is also Lisa Rowse (played by Angelia Jolie), a diagnosed sociopath, Daisy Randone (played by Brittany Murphy), a sexually abused teen with OCD and bulimia and Polly Clark (played by Elisabeth Moss), a burn victim.

Upon its limited release across five screens on December 21, 1999, Girl Interrupted  grossed over $95,000 at the box office; it eventually went on to earn more than $48 million after a worldwide release. Although a commercial success, having netted a little over $8 million altogether, viewers were split in their opinions of the filmーwhile some considered it to be a decent adaptation of the book, others were not too enthusiastic about the extra additions added to the movie.

DuVall’s next major project came in the form of a supernatural horror film called, The Grudge (2004). Directed by Takashi Shimizu (who also directed the Japanese original), the movie revolved around an American nurse, who finds herself falling victim to a mysterious curseーone that ultimately claims their life, prior to spreading to another individual. A remake of the popular Japanese film Ju-On: The Grudge (2002), its main cast included Sarah Michelle Gellar, Jason Behr, William Mapother, KaDee Strickland and Grace Zabriskie; in it, Duvall played the role of Jennifer Williams, the male protagonist’s wife who is the first to be consumed by the curse.

Released on October 22, 2004, The Grudge earned more than $39 million across 3300 theatres over its opening weekend. While ticket sales eventually declined in the subsequent weeks, it ultimately ended up grossing over $110 million at the North America box officeーfar exceeding the expectations of filmmakers and analysts. Although Duvall on-screen time in the film was limited, it is undoubtedly one of the highest-profile movies that she’s been a part of. 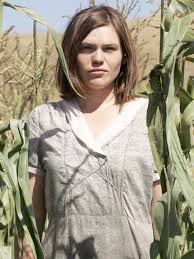 On television, Duvall’s best recognized portrayal is that of Sofie Agnesh Bojakshiya in the HBO series, Carnivale (2003). Set during the Great Depression in the United States, it revolved around two slowly converging story linesーone of a traveling carnival and another of a preacher. Created by Daniel Knauf, it starred Duvall as a fortune teller who can communicate telepathically with her daughter, Apollonia (played by Diane Salinger). Boasting a large talented cast, Carnivale also featured Michael J. Anderson, Adrienne Barbeau, Patrick Bauchau, Clancy Brown, Tim DeKay, and Debra Christofferson in main roles.

Originally premiered on September 7, 2003, its pilot episode drew in over five million viewers and was quickly met with praises for its style and execution; at the time, it was the best premiere that the HBO network had ever experienced. Like many television series however, critical opinion was dividedーin particular, its writing was often criticized. Despite this, Duvall’s performance in the show brought her much fame and widespread attention as an actress. In 2005ーtwo years after its premiereーit earned the actress a Women’s Image Network Award nomination for “Best Actress in a Drama Series”.

In 2012, Duvall appeared in the widely acclaimed, Emmy-Award-winning film, Argo. Adapted from a book by Tony Mendez, a former CIA technical operations officer, it centred around an undercover CIA agent, who while posing as a Hollywood producer, delves into a dangerous mission to rescue six Americans from a hostage crisis in Iran. Starring Ben Affleck, Alan Arkin, Bryan Cranston and John Goodman in the lead roles, it was met with critical praise upon its theatrical release on October 12, 2012. Playing a supporting character, Duvall portrayed the character of Cora Lijekーa Japanese-American who was one of the six diplomats to be rescued in the operation.

Other members of the cast included Tate Donovan, Christopher Denham, Scoot McNairy, Kerry Bishe and Rory Cochrane. A massive box office hit, Argo ended up grossing well over $230 million against a production budget of $44.5 million. Along with the rest of her cast, Duvall received a Screen Actors Guild Award, an Ensemble Cast Award from the Palms Spring International Film Festival, amongst a few other nominations for her work in the movie.

The past year, Duvall starred in an independent drama film called Zen Dogs (2016), which was the brainchild of writer and director, Rick Darge. Premiered at the Raindance Film Festival, it told the story of a man who trapped by the monotony of daily routine, finds himself dreaming of travelling across the country in a psychedelic Volkswagen. Aside from the actress, its cast list also included Kyle llner, Korrino Rico, Adam Herschman, Alex Gallner and Celine Diane.

In terms of upcoming projects in 2017, it looks like the actress will be appearing in an upcoming series entitled, Brooklyn Animal Control. While it’s been announced, no official release date has been revealed as of yetーalthough we do know that it will also be starring Joey Auzenne, Usman Ally and Jane Alexander.

If you’d like to stay up-to-date and connected with the actress of Carnivale fame, you can do so by following Clea Duvall on Twitter at @cleaduvall.