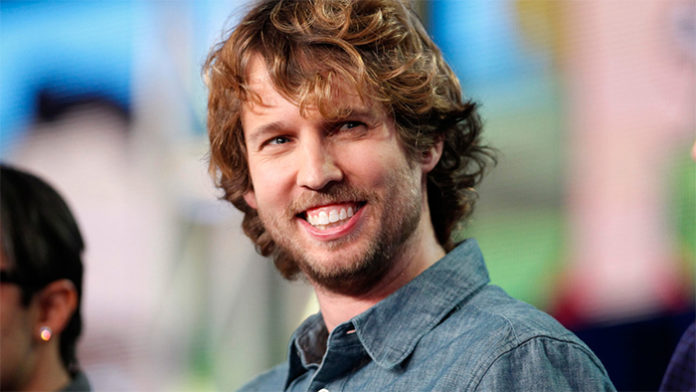 American actor, Jon Heder first gained international recognition in the comedy film, Napoleon Dynamite. Prior to breaking into the show business, he studied film and computer animation at the Brigham Young University with his twin brother, Daniel. Even before attaining his degree in fine arts however, he had appeared in a couple of video shortsーmore specifically in The Wrong Brother (2000), and Funky Town (2000). Shortly after graduating with his Bachelor’s in 2003, Heder was asked by a close friend to act in a short film Peluca, which later premiered at the Slamdance Film Festival. Blown away by the audience’s positive response, the friends eventually joined forces once again to adapt the short into a feature film called, Napoleon Dynamite. Screened in 2004, the comedic picture proved to be a huge success; not only did it gross over 44 million dollars at the box office but it catapulted Hederーwho played the film’s title characterーinto super stardom. To this day, it remains to be one of the most remembered acting roles of his career.

Continuing to rise in celebrity status, Heder went on to appear in a handful of projects the following year including Tankman Begins (2005), Robot Chicken (2005), and Just Like Heaven (2005). In 2006, he received yet another break when he was cast as a lead role in the comedy, The Benchwarmers, which centred around the sport of baseball. Critically praised for his portrayal of Clark Reedy, an adult nerd, Heder received three Teen Choice Award nominations in 2006. Since then, the actor has also starred in School for Scoundrels (2006), Blades of Glory (2007), Mama’s Boy (2007), and For Ellen (2012), the list goes on. Throughout his professional career, Heder has taken on over sixty different roles and have accumulated well over a dozen industry accolades. The winner of two Teen Choice Awards (e.g. Choice Movie Dance Scene, Choice Movie Hissy Fit), he has also received two MTV Movie Awards (e.g. Breakthrough Male, Best Musical Performance), a Grand Jury Award, and an Utah Film Award.

Besides his work as an actor, Heder has also lent his voice to a number of animated movies and series over the years such as Monster House (2006), Surf’s Up (2007), Legend of Kung Fu Rabbit (2011), Pororo The Racing Adventure (2013), My Dad is Scrooge (2014) and Star vs. the Forces of Evil (2015). Outside of television and film, he has even contributed his voice-over talents to the video games Epic Mickey 2: The Power of Two and Armikrog. On top of everything, Heder has also taken part in several reality TV shows including Celebrities on Thin Ice (2007), TableTop (2014), and King of the Nerds (2014).

So what has the actor of Napoleon Dynamite fame been up to recently? Is he still actively taking on roles or has his career taken off in a different direction? What happened to Jon Heder? Where is he now in 2018? 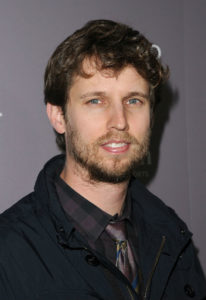 Born on October 26, 1977, in Fort Collins, Colorado, Jon Heder (Birth Name: Jonathan Joseph Heder) is the son of James Heder, and Helen Brammer, the former of whom was a physician. An identical twin, he shares his DNA with is brother Daniel; he also has an older sister, an older brother, and two younger brothers. When he was two years old, he and his family moved to Salem, Oregon, where he spent most of his early life.

Growing up, he went to Walker Middle School and eventually attended South Salem High School as a teen, where he was a member of the Drama club and swim team; he later graduated in 1996. Following his graduation, Heder went to Brigham Young University where he briefly studied film prior to transferring to the computer animation departmentーhe later attained his Bachelor’s of Fine Arts in 2003 at the age of twenty six.

Shortly afterwards, he was approached by a close friend, Jared Hess, who asked him to star in a short film that he was working on at the time called, Peluca (2003). With Heder playing the lead role, the project later premiered at the Slamdance Film Festival, where it was met with critical acclaim by audience members. Blown away by the positive response, Heder and Hess soon began to work on a feature film adaptation which they later entitled, Napoleon Dynamite (2004). The latter’s first full-length motion picture, it centred around a socially awkward teenager who decides to help his friend friend win class presidency at their small community high school.

Similar to its predecessor, the title character was played by none other than Heder; other cast members included Efren Ramirez, Tina Majorino, Aaron Ruell, Jon Gries, and Haylie Duff. Well received by critics and viewers alike, Napoleon Dynamite played a significant role in propelling Heder into show biz stardom. A massive box office hit, it eventually grossed over $46 millionーa figure that stood sharply in contrast to its production budget of $400,000. An all-around success, the Grammy-nominated film earned Hederーwho was a relatively unknown actor at the time, two MTV Movie Awards, and two Teen Choice Awards. 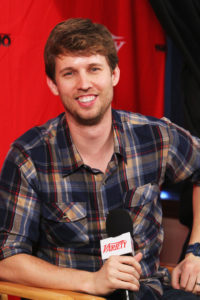 Following his first taste of stardom, the up-and-coming actor received another lead role in Mark Water’s comedy, Just Like Heaven (2005). Based on a book entitled, If Only It Were True by author Marc Levy, it revolved around the life of a landscape artist, who finds himself falling in love with the spirit of a woman who used to live in his apartment. While actors Reese Witherspoon and Mark Ruffalo played the respective leads, the movie also starred Ivana Milicevic, Donal Logue, Dina Waters, Rosalind Chao and Ben Shenkmen.

Opened in theatres on September 16, 2005, Just Like Heaven turned out to be a financial success; from its production budget of $58 million, it eventually went on to gross over $102 million worldwide at the box office. Despite this however, it was generally met with mixed reviews; while some praised it for its excellent characterization and dialogue, others were less enthusiastic about its underwhelming plot. Nonetheless, Just Like Heaven won a Teen Choice Award for “Chocie Chick Flick” and Heder’s portrayal of Darrylーa psychic bookstore employee, earned him a Teen Choice Award nomination for “Choice Actor: Comedy” in 2006.

The next year, Heder co-starred in the sports comedy film, The Benchwarmers (2006). Written by Nick Swardson and Adam Sandler, it revolved around three nerdy adults who try to make up for missed opportunities by forming a three-player baseball team and competing against those in the Little League. Aside from Heder, who played the role of Clark Reedy, the two other members of the trio, Gus Matthews and Richie Goodman were portrayed by actors Rob Schneider and David Spade respectively. While the three of them took center stage, the film also featured appearances from Nick Swardson, Craig Killborn, Molly Sims, Tim Meadows and Doug Jones.

Released theatrically in the United States on April 7, 2006, The Benchwarmers proved to be a financial hit, earning over $19 million and ranking number two at the box office during its opening weekend; it eventually grossed over $65 million against a $33 million budget. In spite of its commercial performance however, it received mostly negative reviews; given an 11% approval rating on Rotten Tomatoes, many critics panned it for its predictability and underwhelming script. Later that same year, Heder received three Teen Choice Award nominations for his role as Reedy.

In the spring of 2007, the actor took on the role of a bawdy sex addict in the comedy, Blades of Glory. Created under the direction of Will Speck and Josh Gordan, it centred around two former Olympic figure skaters (portrayed by Heder and will Ferrel) who after being banned from competing in the men’s singles event, find themselves taking to the ice once again as a pairs team. Upon its theatrical release on March 30, 2007, Blades of Glory quickly took in $33 million during its opening weekend across 3300 theatres; it also beat out Meet the Robinsons to secure the number one spot at the box office.

Aside from its actors , its cast also featured a number of skaters including Sarah Kawahara, Sasha Cohen, Peggy Fleming, Brian Biotano, and many others. Filmed majorly at the Memorial Sports Arena in Los Angeles, the movie received favourable reviews from critics; for instance, it was lauded by film critic Luke Davies as a “fun romp”. The winner of a BMI Film & TV Award, Blades of Glory grossed well over $145 million across the world by the end of its theatrical run.

A handful of voice-over roles later, Heder played alongside Josh Duhamel and Kristen Bell in the romantic comedy flick, When in Rome (2010). Directed by Mark Steven Johnson, who also helped to write and produce the film, it centred around Beth, a young woman who while highly ambitious, has no luck when in comes to love; wanting to change her life, she impulsively takes a few coins from Rome’s fountain of love to disastrous consequences. In the movie, the actor portrayed one of the blonde’s many suitors, Lanceーa street magician who attempts to win Beth over with his magic; other featured actors in When in Rome include Peggy Lipton, Alexis Dziena, Luca Calvani, Dax Shepherd, and Will Arnett.

Distributed by Walt Disney Studios, it made its way to theatres on January 29, 2010. Upon screening during its opening weekend, it grossed over $12 million and ranked number three behind Edge of Darkness (2010), and Avatar (2010). In spite of its star-studded cast however, When in Rome was mainly frowned upon by critics, many panning it for its “reliance on unfunny gags and cliches”.

Since then, Heder appears to have gradually transitioned more towards voice-over roles and away from traditional acting, although he still appears on screen from time to time. In the recent years, he has lent his voice to many characters in My Dad is Scrooge (2014), The Legend of Korra (2014), Huevos: Little Rooster’s Egg-cellent Adventure (2015), A Mouse Tale (2015) and Blind (2016). In 2012 and 2014 respectively, the actor also worked as a voice-actor in the video games, Epic Mickey 2: The Power of Two and Armikrog. 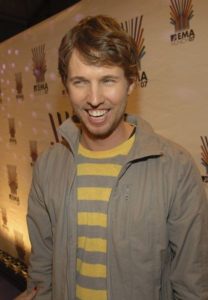 One of the major projects that Heder’s been busying himself with this year is the animated cartoon, Pickle and Peanut. Since it originally premiered on Disney XD in September of 2015, Heder’s been lending his voice to one of the two main leads. Created and directed by Noah Z. Jones, the series features him as Pickleーthe mischievous yet friendly title character of the show who stars in the show alongside his best friend, Peanut (voiced by Johnny Pemberton). Targeted towards younger audiences, it was confirmed at the San Diego Comic Con that it will be returning for a second season sometime in 2017.

In terms of live-action acting, Heder will be starring in two upcoming comedy shortsーWhen Jeff Tried to Save the World (2017), and Gloria Talks Funny (2017), both of which will be directed by Kendall Goldberg.

If you’d like to stay connected with the star of Napoleon Dynamite fame, you can do so easily by following Jon Heder on social mediaーyou can find him on Twitter at @hederjon.