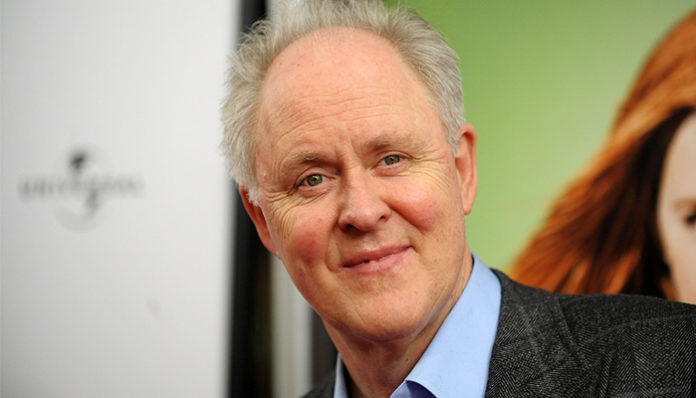 Tony Award-winning actor and musician John Arthur Lithgow has starred in many high-profile series such as 3rd Rock from the Sun, Dexter and The Crown. While he was studying at Harvard, he starred in a production of Utopia Limitedーan experience which ultimately swayed him to pursue acting. After graduating from college, he was offered a scholarship to attend London’s Academy of Music and Dramatic Art. Following his return to the United States, he began working at his father’s theatrical company; at the same time, he also attended auditions in hopes of landing an acting role. At the age of twenty seven, his efforts finally paid off when he landed a starring role in David Storey’s The Changing Room. Propelled into stardom, he soon found himself playing lead parts in the stage plays My Fat Friend and Anna Christie. In 1972, Lithgow also made his feature film debut in comedy thriller, Dealing with help from his friend Brian De Palmer, who managed to pull some strings.

For the next few years, the aspiring performer continued to appear in both television and filmーsome of his earl projects include The Country Girl (1974), Obsession (1976), Great Performances (1977), The Big Fix (1978), All That Jazz (1979), and Big Blonde (1980). But it was his performance in the mystery thriller, Blow Out (1981) that garnered him much widespread acclaim. From there, his portrayal of a transsexual athlete in The World According to Garp (1982) brought him much applause and fameーin later earned him his first Oscar Award nomination for “Best Support Actor”. On the topic of accolades, his multi-decade achievements have garnered him many from the industry including two Golden Globe Awards (e.g. Best Performance by an Actor in a Supporting Role, Best Performance by an Actor in a Television Series), five Primetime Emmy Awards (e.g. Outstanding Lead Actor in a Comedy), two Screen Actors Guild Awards (e.g. Outstanding Performance by a Male Actor in a Comedy), amongst countless nominations.

Aside from his work as an actor, Lithgow is also an established musician. As a singer, he has released two albumsーSingin’ in the Bathtub (1999), and The Sunny Side of the Street (2006). On stage, he has also starred in Marvin Hamlisch’s musical, Sweet Smell of Success in 2002. Besides acting and singing, he has also authored a handful of booksーmost of which are targeted towards children. A few of his titles include Marsupial Sue (2001), Carnival of the Animals (2004), Lithgow Paloozas! Boredom Blasters (2005), and I Got Two Dogs (2008). A provider of children’s entertainment, Lithgow has even been featured in a Canadian children’s program called, Ants in Your Pants back in the 2000’s.

So what has the actor, musician, and author been up to recently? What are some of the latest projects that he’s taken on in the entertainment scene? What happened to John Lithgow? Where is he now in 2018? 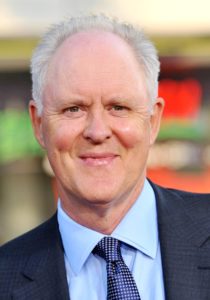 Born on October 19, 1945, in Rochester, New York, John Arthur Lithgow is the son of Arthur Washington Lithgow III and Sarah Jane. While his mother was a retired actress, his father was the owner of a New Jersey theatrical company. Due to his fathers work as a director and producer, Lithgow moved around frequently with his family during his early life.

Often accompanying his father to work as a young boy, he took to the stage for the first time when he was six at one of his productions. Despite having regularly appeared in Shakespearean plays growing up, Lithgow’s dreams at the time gravitated more towards becoming a fine artistーhe wanted to resist falling into the family business, and become a painter. Unbeknownst to him at the time however, he would soon change career paths.

As a young adolescent, Lithgow attended Harvard College where he studied literature and history. During his time there, he participated in an on-stage production of Utopia Limited by Gilbert and Sullivanーit was ultimately that experience that swayed him to pursue a career as an actor. After graduating in 1967, he was offered a Fulbright Scholarship to enrol at London’s Academy of Music and Dramatic Art; it was there at the prestigious institution, that he began honing his craft. Following his time in London, Lithgow returned to the United States where he started to work at his father’s theatrical company. As he did so however, he also put himself out there via auditions in hopes of breaking out into the show business. His luck came in 1972, when he landed a leading part in David Storey’s The Changing Room. Met with critical acclaim, it brought him much widespread attention as a performer and even netted him his first Tony Award for “Best Featured Actor in a Play” soon afterwards. 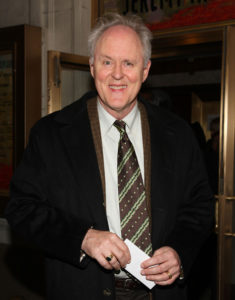 In 1981, the aspiring actor was cast in his friend, Brian De Palma’s thriller film, Blow Out. Adapted from an earlier movie of the same name from 1966, it revolved around a sound recordist, who finds himself in grave danger after accidentally recording evidence that proves a car accident to be a homocide. While John Travolta played the part of Jack Terry, the sound technician in question, Lithgow portrayed the role of a serial killer named Burke.

Besides the two, the film also starred Nancy Allen, Dennis Franz, Peter Boyden, and Curt May. Upon its theatrical release on July 24, 1981, Blow Out piqued little interest from audiences. Nonetheless, it received critical praise from critics, many lauding the cast’s performance and the film’s visual style; it has since become a cult classic. Although it was a commercial flop, having only grossed $12 million from a $18 million budget, it served as a turning point for Lithgow, who previously had only been offered minor roles.

The following year, Lithgow dazzled audience and critics alike with his portrayal of a transsexual in the comedy drama film, The World According to Garp (1982). Based on a book of the same name by author John Irving, who also helped to write the script play, it chronicled the life of T.S. Garp (played by Robin William), the illegitimate son of his feminist mother, Jenny Fields (played by Glenn Close). In terms of Lithgow, he took on the role of Roberta Muldoonーa transsexual ex-football player who befriends Garp throughout the course of the movie. Released in theatres on July 23, 1982, The World According to Garp was generally well-received by critics; for instance, Robert Ebert of the Chicago Sun-Times gave it a three star rating, describing it as “wonderfully well-written”. Regarded as a fair rendering of the original novel, it ended up being a commercial success, grossing over $29 million at the box office. For his portrayal, Lithgow received a handful of awards including “Best Supporting Actor” Awards from the Los Angeles Film Critics Association and New York Film Critics Circleーhe also earned his first Academy Award nomination later that year. 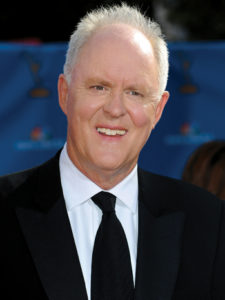 In 1983, Lithgow co-starred in the box office hit, Terms of Endearment alongside Debra Winger, Shirley MacLaine, Jack Nicholson and Danny DeVito. Directed, produced and written by James L. Brooks, it followed a mother and daughter (played by MacLaine and Winger respectively) relationship over the course of three decades.

Opened nationwide in theatres on November 9, 1983 after a limited release earlier that year, it quickly proved to be a massive commercial success; not only did it rank at number two, but it also brought in over $3.4 million during its opening weekend. Universally acclaimed, Terms of Endearment received much praise for its script and acting. By the end of its theatrical run, it had grossed over $108 millionーover thirteen times that of its production budget. Showered with applause, it eventually won four Golden Globe Awards and five Academy Awards, amongst numerous nominationsーone of which was directed towards Lithgow for “Best Supporting Actor”.

Later transitioning to television, the actor collided with perhaps the biggest break of his career when he was cast as a lead in the NBC sitcom, 3rd Rock from the Sun (1996). Created by the husband-and-wife team Bonnie and Terry Turner, the show revolved around four extraterrestrials who are visiting earth (a planet which they deem to be insignificant) on an expedition; in order to observe the behaviour of human beings without being detected, they pose as a normal human family. Originally premiered on January 9, 1996, 3rd Rock from the Sun was a critical success; it quickly became a fan favourite, attracting millions of viewers to their screens every week. A member of its ensemble cast, Lithgow played the part of Dick Solomanーthe youngest, yet oldest member of the “family” who also serves as the expedition’s high commander. Other featured actors of the series include Kristen Johnston, Joseph Gordeon Levitt, French Stewart, Jane Curtin, Elmarie Wendel and Simbi Khali. One of the most popular sitcoms of the 90’s, 3rd Rock from the Sun went on to win a total of five Emmy Awards, and a Golden Globe Award. Widely praised for his portrayal of Dick, Lithgow’s performance also netted him a Screen Actors Guild Award, a Satellite Award, and a Primetime Emmy Award; to this day, it remains to be one of his most well known roles as an actor.

In 2009, Lithgow returned to the small screen in the popular crime drama series, Dexter. Based on a novel by Jeff Lindsay, it revolved around a forensic technician who leads a secret life as a vigilante serial killer. While actor Michael C. Hall took on the title character of Dexter, Lithgow portrayed the role of the “Trinity Killer”ーa murderer who makes his first appearance in the show’s fourth season. Commended for his convincing performance opposite of Hall, the role earned him a Satellite Award, a Golden Globe Award and a Primetime Emmy Award. 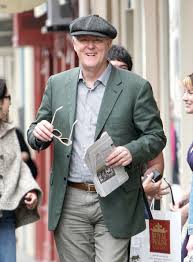 One of the projects that the actor’s been busy with this past year is the upcoming comedy, Beatriz at Dinner (2017). Written by Mike White, it stars actress Salma Hayek as a holistic medicine practitioner, who finds herself present at the dinner of a wealthy client, after her car breaks down. Aside from her and Lithgow, the movie will also be featuring Chloe Sevigny, Connie Britton, Nina Arianda, Amy Landecker and John Early. Completed, it is set to hit the screens on January 23, 2017 in the United States.

Aside from that, Lithgow will also be starring in Trial & Error, a NBC sitcom that is set to be released on March 7, 2017. Created by Jeff Astrof and Matt Miller, its star-studded cast list also includes Nick D’Agosto, Steven Boyer, and Sherri Shepherd.

If you’d like to stay up-to-date and connected with the award-winning actor, you can do so by following John Lithgow on social mediaーyou can find him on Twitter at @JohnLithgow.