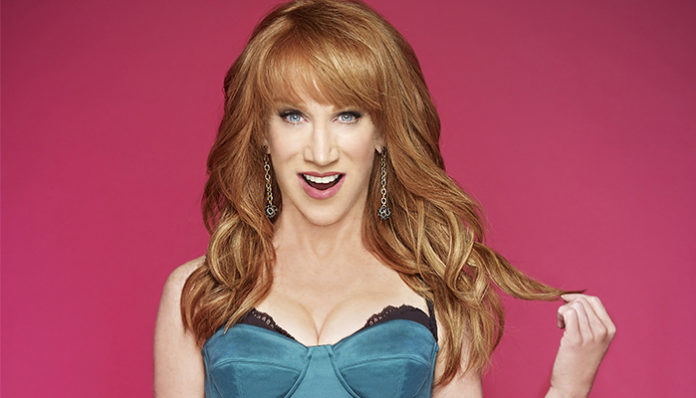 A former student of the Lee Strasberg Theatre and Film Institute, Kathy Griffin initially gained recognition for her role in the NBC comedy, Suddenly Susan (1996). When she was in high school, she became involved in musical theatreーshe took part in a number of plays such as Fiddler on the Roof and How to Succeed in Business Without Really Trying. Despite her parents’ urges for her to go to college, Griffin ultimately chose to pursue a professional acting career following her graduation, much to their dismay. With time, she eventually persuaded them to let her relocate to Los Angeles in 1978. Wanting to hone her skills, she later joined an improv group called The Groundlings the following year. From there, Griffin soon became part of the comedy scene in LA, performing stand-up at various local venues. After landing a few uncredited roles on television in the early 80’s, the aspiring actress made her television debut in the TV film, On the Fritz (1988).

Continuing to audition for roles, she then appeared in the comedies, On the Television (1989) and The Fresh Prince of Bel-Air (1990). In 1991, Griffin appeared in theatres for the first time in the horror drama film, The Unborn. Over the next few years, she took part in a number of TV shows and movies including Shakes the Clown (1991), Medusa: Dare to Be Truthful (1992), Civil Wars (1993), ER (1995), and Mad About You (1995). After starring in a few episodes of Saturday Night Special in 1996, she received a big break when she was given a supporting role in the comedy series, Suddenly Susan (1996). Co-starring alongside Brooke Shields, Nestor Carbonell and Judd Nelson, Griffin gained much recognition from her portrayal of Vicki Groener on the small screenーit is considered to be her breakthrough by many. Since then, she has also appeared in Dilbert (2000), The Simpsons (2001), The Drew Carey Show (2002), Spider-Man (2003), and Cheap Seats: Without Ron Parker (2005), to name a few.

Aside from her involvement in acting, Griffin has also become fairly well known in the world of reality TV over the years. In 2005, she was given her own series, Kathy Griffin: My Life on the D-List on Bravo, which followed her struggles in Hollywood. Highly acclaimed, it earned her a number of prestigious industry awardsーamongst which were two Primetime Emmys for the category of “Outstanding Reality Program”. Some of the other shows which she’s been featured in include: Celebrity Poker Showdown (2004), All-Star Reality Reunion (2005), Dog Whisperer (2008), The Celebrity Apprentice 2 (2009), and Raphael vs Guy: Celebrity Cook-Off (2012), the list goes on.

So what has the award-winning actress and comedian been up to these recent months? What are some of her new undertakings? Has she appeared in television or film lately? What happened to Kathy Griffin? Where is she now in 2018? 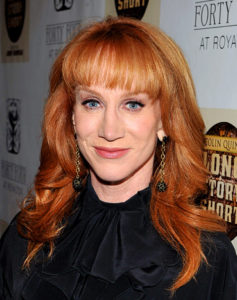 Born on November 4, 1960 in Chicago, Illinois, Kathy Griffin (Birth Name: Kathleen Mary Griffin) is the daughter of John Patrick and Mary Margaret Griffin; she is of Irish descent. Raised with her four siblings, Griffin was a social butterfly; as a child, she loved telling stories and giving “live shows” to her neighbours.

Despite her idyllic childhood however, she soon found herself becoming lonely after most of her siblings moved away. As a result, she developed an eating disorder, which caused great difficulties for her during her youth. After attending St. Bernadine’s Elementary School, Griffin went to Oak Park and River Forest High School in Oak Park, Illinoisーit was during that time that she first became interested in musical theatre. Subsequently, she participated in a number of local plays including that of Fiddler on the Roof and How to Succeed in Business Without Really Trying.

Following her high school graduation, Griffin fell into an argument with her parents; while they wanted her to attend college, the blonde had her eyes set for Hollywood. After much persuasion, the two allowed her to move to Los Angeles so that she may try to make her debut as an actress. Soon afterwards, she also joined a California-based improv troupe called The Groundlings, with which she performed a number of times with. From there, she made herself known in the Los Angeles comedy scene, prior to focusing her attention on acting. Griffin eventually made her television debut in the TV film, On the Fritz (1988). Continuing to land various small roles, she then went on to appear in The Fresh Prince of Bel-Air (1990), and The Unborn (1991)ーthe latter of which was also her first time being on the big screen.

Amassing film and television credits over the next few years, Griffin later made a handful of appearances in Medusa: Dare to be Truthful (1992), Civil Wars (1993), Dream On (1993), ER (1995), Four Rooms (1995), and The Barefoot Executive (1995). In 1996, she received her breakthrough role when she was cast as Vicki Groenerーa supporting character in the comedy series, Suddenly Susan. 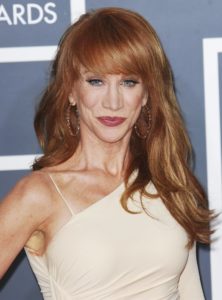 Developed by Gary Dontzig and Steven Peterman, Suddenly Susan starred Brooke Shields as the title character, Susan Keaneーa magazine writer who adjusts to the single, independent life after having been taken care of for most of her life. In the comedy, Griffin portrayed the role of Vicki GroenerーSusan’s co-worker who works as a restaurant critic. A supporting character, she was first introduced in the series’ first episode entitled, “First Episode”ーwhich aired on September 19, 1996. Aside from the two actresses, Suddenly Susan also featured Nestor Carbonell, David Strickland, Andrea Bendewald, and Barbara Barrie. Although Griffin had already accumulated a few years of experience as an actress at the time of the casting, it was her first time playing a major character on TV.

Upon its premiere on NBC that fall, the comedy proved to be a success amongst viewers; on average, the first season drew in over 16 million viewers. Although the ratings dropped in the subsequently dropped the next yearーpossibly due to the fact that the entire writing staff was replacedーit eventually managed to climb back up in the third season. Well receivedーespecially by casual viewers, Suddenly Susan ran for a total of 93 episodes prior to ending on December 26, 2000. Over a decade after its initial debut, the series garnered Griffin a TV Land Award nomination for the “Co-Worker You’re Least Likely to Invite for Happy Hour” category.

A year after the new millennium, the actress starred in her first reality series, Kathy’s So-Called Reality (2001). Hosted by the former Suddenly Susan star, its format has been described as “half round-table, half monologue”. Originally aired on MTV on February 4, 2001, the show saw Griffin discussing a number of clips from various television series from the week prior, with a panel of friends and family. Despite its positive rating of 8.4/10 on IMdb, Kathy’s So-Called Reality was ultimately cancelled after just six episode due to low ratings. Whitney Matheson writing for USA Today later stated that the show appeared to have been “struggling for content”. The final episode was broadcast on April 1, 2004.

Several appearances on TV later, Griffin received perhaps the biggest breakthrough of her career when she was offered her own major reality series, Kathy Griffin: My Life on the D-List (2005). Co-produced by the actress herself, it depicted the struggles that she’s had to face throughout her career in the show business. In attempts to climb up the Hollywood ladderーas is revealed in the seriesーGriffin found herself scheming for publicity on many occasions with the help of her staff, Tom, Tiffany and Jessica. Also featured in the show are her relationships with her parents and ex-husband, Matt Moline.

Released via the Bravo on August 3, 2005, Kathy Griffin: My Life on the D-List quickly became one of the most-watched reality shows on the network. During its fifth season, it premiered with almost a million viewersーmaking it their highest-rated Monday original series of all time. Met with applause, it received many praises for showing the naked truth of a celebrity’s life; many have also lauded its comedic elements. Recognized by the industry, Kathy Griffin: My Life on the D-List received a Primetime Emmy Award nomination for all six of its seasons for the category of “Outstanding Reality Program”ーamongst which were two wins. In addition, it has also garnered her nominations for an OFTA Television Award, a People’s Choice Award and four PGA Awards. 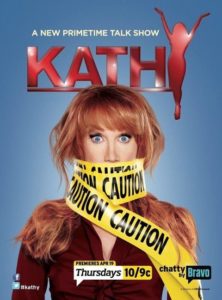 Many years later in the spring of 2012, Griffin hosted her own late-night talk show, Kathy on Bravo. Directed by Lenn Goodside, it featured her stand-up comedy during the first half after which was followed by a discussion about recent issues with a panel of staff or friends; the series then goes on to show a segment of Kathy’s comedic anticsーwhich is pre-recorded.

In addition to becoming accompanied by her assistant, Tiffany Rinehart in the show, her mother, Maggie Griffin is also present and seated at the front of the audience; she is later featured in the segment called “Maggie Tucks Us In”, in which she presents her opinions on various topics. Aside from the hostess herself, Kathy also starred Michelle Collins, and Meredith Morris.

Originally broadcast on the Bravo Network on April 19, 2012, Kathy was later re-decorated as a whole for its second season. For instance, instead of civilian panellists, the show welcomed mostly celebrity guests; Maggie’s segment was also cut from the latter half of the talk show. All in all, the series ran for a total of 24 episodes, spread out over two seasons, prior to ending on March 28, 2013.

Since then, Griffin has guest-starred in several television seriesーin 2013, she made a special appearance as herself in Cyndi Lauper: Still So Unusual. The actress later went on to appear in an episode of the TV Land sitcom, Kirstie in 2014. Later that same year, she also appeared in an episode of the popular CBS game show, Big Brother (2014). More recently, she has also graced the screens with her presence in Fashion Policeーin which she acted as the hostーand RuPaul’s Drag Race, which saw her as a guest judge. 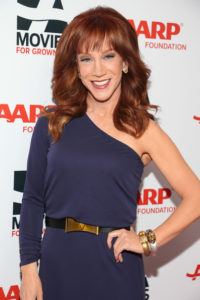 Sometime this year, the actress and reality star will be making an appearance in the documentary, Everybody Has an Andy Dick Story (2017). Currently in post-production after having already been filmed, it will revolve around the funny and outrageous stories of Andy Dick. Directed by Cathy Carlson, it will also feature a number of guest celebrities including Ben Stiller, Pauly Shore, Nick Swardson, Vicki Lewis and Kate Flannery.

Outside of television, Griffin has also been busy embarking on her Celebrity Run-in Tourーwhich is in support of her latest book, Kathy Griffin’s Celebrity Run-Ins which was released in November 2016. If you’re itching to see the star up on-stage, you’ll be glad to know that tickets for the event are still available for purchase. For more information, please visit Kathy Griffin’s official website.