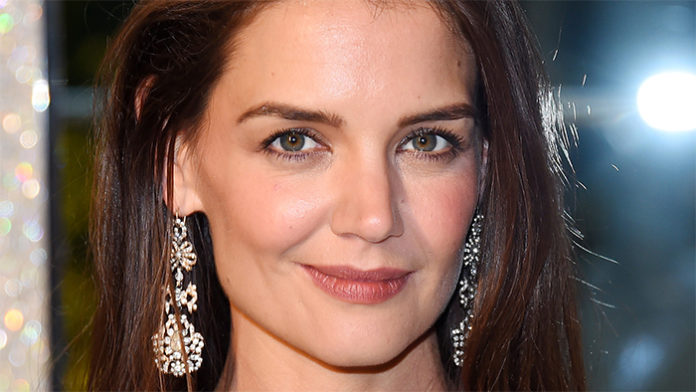 Ohio-born actress, Katie Holmes first shot into stardom in the teen drama series, Dawson’s Creek. Despite her father’s wishes of her becoming a doctor, the brunette has always had her eye on becoming a star. At the age of fourteen, she began taking classes in a Toledo modelling schoolーtwo years later, she stepped down the runaway after being invited by her teacher to take part in a modelling competition. Shortly afterwards, Holmes participated in yet another competition held by the International Modeling and Talent Association, one which involved her reciting a monologue from the classic drama, To Kill a Mockingbird. Although she quickly accumulated many modelling awards, she later decided that it was not something that she wanted to pursue as a career as it was not challenging enoughーinstead, she wanted to become an actress. In attempts to make her newly found dreams a reality, she relocated to Los Angeles when she was seventeen. With a little bit of luck, she landed a role in the film, The Ice Storm (1997) after attending only two auditions.

Just a year after moving to the country’s entertainment central, Holmes received a big break with the teen drama, Dawson’s Creek (1998). Cast as one of the lead characters, it didn’t take long for her to rise in fame during the late 1990’s and early 2000’s. Lauded for her performance, the actress received a total of six Teen Choice Award nominations for her portrayal of Joey Potter on the show. Eventually transitioning towards film, she starred in Teaching Mrs. Tingle (1999), Pieces of April (2003), Batman Begins (2005), Days and Nights (2013), and Woman in Gold (2015), amongst many others. Since she landed her first professional acting role in The Ice Storm (1997), she has appeared in well over thirty different films and television series and has collected over a dozen different accolades in the industryーincluding an MTV Movie Award for “Best Breakthrough Female Performance” and a Women in Film Crystal Award for “Face of the Future”.

Named as “One of the Sexiest Women in the World” by FHM, Holmes has modelled for a handful of well-known brands over the past few years including Coach, Garnier and Gap. In 2008, it was announced that the brunette would also be representing the Italian high-fashion line, Miu Miu. Hailed as one of the “50 Most Beautiful People” by People Magazine, she has also since become the face of Ann Taylor, Bobbi Brown Cosmetics and Alterna Haircare. Aside from acting and modelling, the actress is also the co-founder of a high-fashion clothing line called Holmes & Yang, with which she owns with long-time stylist, Jeanne Yang.

What has the brunette beauty been up to these recent years? What are her latest endeavours in the show business? What happened to Katie Holmes? Where is she now in 2018? 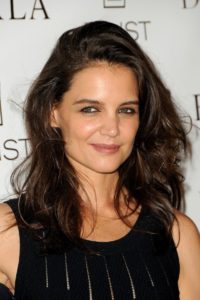 Born on December 18, 1978, in Toledo, Ohio, Katie Noelle Holmes is the daughter of Martin Joseph Sr., and Kathleen Holmes, an attorney and homemaker. The youngest out of five children, she has three older sisters and an older brother and is of English, Irish and German descent. Growing up, she has always been known for her strong-willed personalityーa quality which her parents have attributed to her premature birth.

Although her father had always wanted her to become a doctor, Holmes had a different mindset; she had her eyes set on modelling and acting. Acting on her dreams, she enrolled herself at Toledo’s modelling school when she was fourteen years old. Two years later, she stepped onto the runway for the first time in a modelling competition at the age of sixteen. From there, she eventually took part in yet another competition held by the International Modelling and Talent Associationーone where she danced, sang and recited a monologue from the classic, To Kill a Mockingbird.

While she proved to be a talented model, having earned many awards during her teenage years, Holmes ultimately decided at the age of seventeen that it wasn’t something that she wanted to pursue in the long run as it “wasn’t challenging enough”. Wanting to instead focus her attention and efforts on acting, she later relocated to Los Angeles, where she wasted no time in attending auditions. As fate would have it, she quickly landed a role in the film, The Ice Storm (1997), the following year. Despite having been a  minor part, it marked her official entry into the show business as an actress. After playing another small role in the movie Disturbing Behaviour (1998)ーone which earned her a Saturn Award nomination for “Best Performance by a Younger Actress”ーHolmes received the big break that she’d been waiting for when she was cast as one of the main characters in The WB teen drama, Dawson’s Creek (1998). 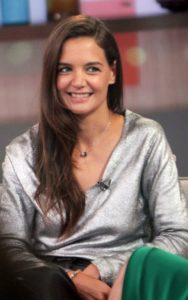 Created by Kevin Williamson, Dawson’s Creek premiered on The WB on January 20, 1998, after having been filmed entirely in North Carolina. Revolving around teenage life, it centred around a close-knit of friends as they entered high school in the fictitious Massachusetts town of Capeside. Even prior to its debut, the series had generated much publicity, with many television critics expressing possible concerns about its anticipated dialogue and plot. Nonetheless, Dawson’s Creek fared well among younger viewers and quickly became a defining show for the network; during the initial season, it attracted an average of 6.6 million viewers. Her first starring role on television, Holmes played the part of Joey Potterーa “girl next door” who eventually develops romantic feelings for Dawson, the show’s title character; joining her on set were actors: James Van Der Beek, Michelle Williams, Joshua Jackson, Mary-Margaret Humes and John Wesley Shipp.

One of the most popular teen shows on the screen at the time, Dawson’s Creek has been included in Entertainment Weekly’s list of “New TV Classics” in 2007. A couple of years after its initial broadcast, it also spawned a semi-spin off called, Young Americans which revolved around the character of Will Kurdskiーwhom was introduced near the end of the show’s third season. Nominated for over two dozen awards, The WB drama garnered many awards throughout its run including a GLAAD Media Award for “Outstanding TV Drama Series” in 2000, amongst many others. For her portrayal of Joey, Holmes received five Teen Choice Award nominations for “Choice TV Actress”. Although Dawson’s Creek wrapped up back in 2003, it remains to be one of the actress’ best remembered roles on television. 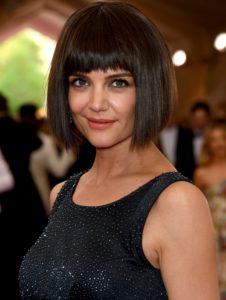 On film, Holmes secured her first lead role in the dark comedy thriller, Teaching Mrs. Tingle in 1999. Directed and written by Kevin Williamsonーthe creator of Dawson’s Creekー, the film focused on a trio of high school seniors who after being accused of cheating on their exams, set off to prove their innocence to their rancorous history teacher.

While Helen Mirren played the part of the teacher in question, Holmes portrayed the role of Leign Ann Watsonーa high-achieving student who has her eyes set on becoming her class’ valedictorian; other members of the main cast included Jeffrey Tambor, Marisa Coughlan, Liz Stauber, and Barry Watson. Opened in theatres on August 20, 1999, Teaching Mrs. Tingle was unfortunately a commercial flop; created on a production budget of $13 million, it had only managed to gross $8.9 million at the box office by the end of its theatrical run. Nonetheless, Holmes’ performance in her first starring role did not go unnoticed; for her portrayal of the teen girl, she was nominated for an MTV Movie Award and a Teen Choice Award later that year.

In 2005, Holmes worked with director Christopher Nolan in the action film, Batman Begins. A reboot of the original series, it depicted the rise of Batman and his eventual fight against the Scarecrow and League of Shadows in order to save Gotham City. Released theatrically on June 15, 2005, it grossed over $48 million during its opening weekend and quickly proved to become a box office hit. Regarded by many to be one of the best superhero movies of the century, it boasted a star-studded cast list which featured Christian Bale, Michael Caine, Liam Neeson, Gary Oldman, Cilian Murphy and Tom Wilkinson; while Bale played the title character of Batman, Holmes portrayed the role of Rachel Dawes, the former’s childhood friend and love interest. The holder of an 85% rating on Rotten Tomatoes, Batman Begins received many praises for its strong characters and fast-paced action scenesーit later received an Academy Award nomination for “Best Cinematography at the 78th annual ceremony in 2006. While her role in the film didn’t earn her any wins per se, it did garner her a Saturn Award nomination for “Best Supporting Actress”.

Half a decade later, the actress starred in the dark fantasy horror flick, Don’t Be Afraid of the Dark (2010). A remake of a television film of the same name from the early 70’s, it followed the Hurst family as they moved into a nineteenth century mansion in Rhode Island; as they settle into their new home, their eight-year-old daughter begins witnessing malevolent creatures emerging from the basement of the house. Starring Guy Pearce, Bailee Madison, Jack Thompson, Alan Dale, and Garry McDonald, Don’t Be Afraid of the Dark featured Holmes as the character of Kim Hurstーthe girlfriend of male protagonist, Alex Hurst (played by Pearce). Released in theatres on August 26, 2011, after having premiered at the Virginia Film Festival the previous year, it was met with generally mixed-positive reviews; while some criticized it to be inferior to the original, others commended it for its well-developed characters and acting. A financial success, Don’t Be Afraid of the Dark ended up taking in close to $37 million at the box office from a production budget of $25 million; it was eventually released on DVD in January of 2012. 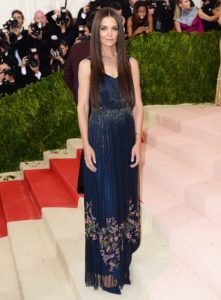 These past few months, Holmes has been working on an upcoming television mini-series called, The Kennedys: After Camelot (2017). Adapted from the book, After Camelot: A Personal History of the Kennedy Family 1968 to the Present by author J. Randy Taraborreli, it will also be starring Matthew Perry, Alexander Siddig, Kristen Hager, Diana Hardcastle and Kristin Booth. Currently still in the filming stages, the showーwhich will be four episodes in lengthーis scheduled to go on air sometime in 2017.

Another one of the actress’ ongoing projects is the comedy film, Logan Lucky (2017). Written by Rebecca Blunt, it will centre around two brothers as they plan a heist during a North Carolina NASCAR race. To be released in theatres on October 13, 2017, it will also feature the acting talents of Katherine Waterton, Adam Driver, Riley Keough, and Daniel Craig.