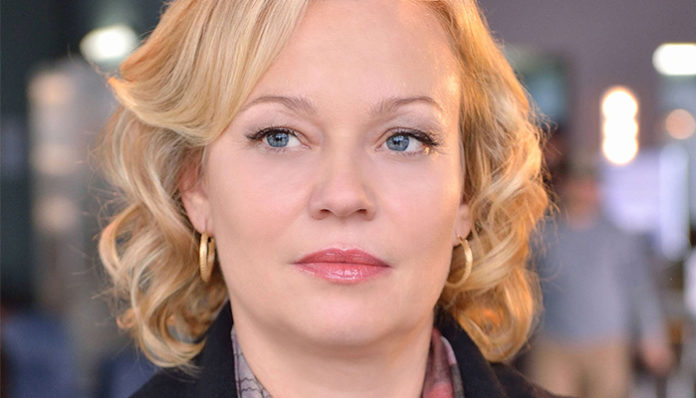 Raised in the country’s entertainment capital of Los Angeles, Samantha Mathis first broke out into the Hollywood scene in the film, Pump Up the Volume (1990). Born into a family of actors, the blonde knew from a young age that acting was something that she wanted to pursue. While she appeared in a handful of commercials during her youth, it wasn’t until she was sixteen that she made her debut in the the television series, Aaron’s Way (1988). Soon afterwards, she landed yet another recurring role in the  ABC drama, Knightwatch (1988). A few small appearances later, Mathis co-starred in the comedy film, Pump Up the Volume (1990) opposite of Christian Slater; it also served as her feature film debut. From there, the blonde went on to appear in a number of TV movies including Extreme Close-Up (1990), 83 Hours ‘Til Dawn (1990), This Is My Life (1992), and The Music of Chance (1993). Over the next couple of years, she played alongside Winona Ryder in the films Little Women (1994), and How to Make an American Quilt (1995).

Continuing on her path towards stardom, Mathis appeared in several projects throughout the rest of the 90’s some of which included Sweet Jane (1998), Waiting for Woody (1998), Freak City (1999), and The Outer Limits (1999). At the age of thirty, she was cast as one of the main leads in American Psycho (2000)ーan adaptation of Bret Easton Ellis’ novel from 1991. The actress then starred in a television mini-series called The Mists of Avalon (2001), prior to appearing in First Years (2001), Night Visions (2001), Becoming Glen (2002), The Twilight Zone (2003), and Salem’s Lot (2004)ーthe last of which earned her a Saturn Award for the category of “Best Supporting Actress on Television”. Known for her beauty and talents, Mathis has over seventy credits to her name as an actress; over the years, she has also received a Screen Actors Guild Award nomination (e.g. Outstanding Cast Performance) and a Young Artist Award nomination (e.g. Best Young Actress in a Motion Picture).

After spending most of the 90′ starring in films, Mathis began branching out into television at the end of the decade. In 1999, she co-starred in a Fox science fiction series called Harsh Realm, however it was unfortunately cancelled after nine episodes. Following that, she made sundry guest appearances in the popular shows Night Visions (2001), The Twilight Zone (2003), Law & Order: Special Victims Unit (2005), Law & Order: Criminal Intent (2005), House (2006), Lost (2007), and Grey’s Anatomy (2009), to name a few. In 2013, she was also offered a supporting role in the CBS mystery drama, Under the Dome.

So what has the charming actress been up to as of late? Is her acting career still going strong? If so, what new roles have she picked up recently? What happened to Samantha Mathis? Where is she now in 2018? 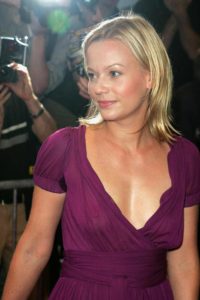 Born on May 12, 1970 in New York City, New York, Samantha Mathis is the daughter of Bibi Besch and Donald Mathis, the former of whom was an actress. When she was still a toddler, her parents separated and divorced; she was subsequently raised wholly by her mother.

After living in the city of Brooklyn for the early years of her childhood, they moved to Los Angeles when she was five years old. Despite the fact that her motherーknowing hardships that acting entailsーdiscouraged her from becoming an actress, the blonde knew ever since she was a little girl, having accompanied her mother to various theatres and locations during her youth, that it was something that she wanted to pursue as a career. Before she landed her first professional acting role, she appeared in a number of television commercials, including ones for baby products.

After attending various auditions, Mathis made her television debut in the NBC family drama, Aaron’s Way in 1988. Later that same year, she was cast as a supporting character in the ABC series, Knightwatch (1988) where she acted alongside Benjamin Bratt, Don Franklin, and Paris Vaughan. Despite heavy promotion, ratings for the show remained low; consequently, it was cancelled after just three months on the air. Determined to make it big as an actress, Mathis went on to appear in a string of television movies including Cold Sassy Tree (1989), Extreme Close-Up (1990), and To My Daughter (1990). Gradually switching her focus towards film, she later made her big screen debut in the comedy, Pump Up the Volume (1990). 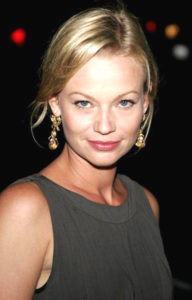 Directed by Allan Moyle, who also helped to write the screenplay, Pump Up the Volume revolved around a high school student who starts a pirate radio station from the basement of his home; a loner at school, he eventually finds himself able to speak his mind on his show as “Hard Harry”. As his station attracts more listeners however, it begins to stir trouble within the community. While actor Christian Slater portrayed the role of Mark Hunter, the teenager in question, Mathis was given the part of Nora Diniro, a fellow student who is the first to realize his true identity. Boasting a team of talented cast members, Pump Up the Volume also featured Mimi Kennedy, Scott Paulin, Cheryl Pollak, and Annie Ross.

Released in theatres on August 22, 1990 in the United States and Canada, it earned a little over $1.6 million across 800 screens. By the end of its theatrical run, Pump Up the Volume had grossed more than $11.5 million domestically. Despite its mild success at the box office, the film was met with majorly positive reviews; for instance, USA Today gave it an impressive three and a half star rating. Lauded for its realistic portrayal of adolescence, it went on to win two awards at the Deauville Film Festival.

The next year, Mathis co-starred in Nora Ephron’s drama film, This Is My Life (1992). Based on a book written by Meg Wolitzer, it centered around a stand-up comedian named Dottie Ingels (played by Julie Kavner) who while bathing in her newly found fame, begins to neglect her two children. One of the main cast members in the movie, Mathis played the role of Erica, one of her daughters; her sister, Opal is portrayed by Gaby Hoffmann. As the siblings grow increasingly frustrated with their mother’s lack of affection, they eventually set off to find their fatherーwho had left them while she was still a toddlerーin upstate Albany. Besides the previously mentioned actors, This Is My Life also starred Carrie Fisher and Dan Aykroyd.

Distributed by 20th Century Fox, the movie made its way onto theatre screens on February 21, 1992. A moderate hit, it went on to gross over $2.9 million in the United States. Like many films however, opinion on it was divided; while some praised it as a spectacular mother-and-daughter tale, others were considerably less keen about its storyline. Still, This Is My Life earned Mathis her first industry recognitionーa Young Artist Award nomination for the category of “Best Young Actress Starring in a Motion Picture” in 1993. 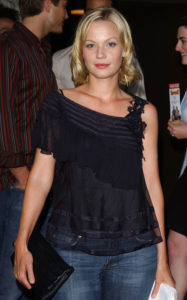 In 1995, the blonde worked alongside actress Winona Ryder for he second time (her first being in that of Little Women (1994)) in the movie, How to Make an American Quilt. Based on a novel of the same title by author Whitney Otto, it centered around a bride-to-be, Finn Dodd (played by Ryder) who listens to various tales of sorrow and romance from her grandparents as they work on a quilt that will be her future wedding gift. As she listens to the stories of love told by her elders, she begins to question whether or not she is truly ready to be married to her boyfriend, Sam (played by Dermot Mulroney). In it, Mathis portrayed the role of young Sophia Darlingーa diver who finds herself overwhelmed with her overbearing mother.

Originally released on October 6, 1995, How to Make an American Quilt proved itself to be a box office hit; towards the end of its theatrical run, it have grossed more than $41 million across the world. In spite of impressive ticket sales however, it garnered mostly mixed reviews. While most viewers praised it for its knockout cast, some were less inspired by its muddled take-home message. Nevertheless, the film received multiple award nominations including an MTV Movie Award nomination, two Image Award nominations and a Screen Actors Guild Award nomination.

Fast forward a few years, Mathis took part in Mikael Salomon’s television mini-series, Salem’s Lot (2004). Adapted from Stephen King’s novel from 1975, it followed Ben Mears, a writer who after returning to his childhood town, finds out that it has been terrorized by a group of vampires. Filmed in Australia despite being set in a small Maine community, it starred actor Rob Lowe as Mears. A member of the main cast, the actress was featured as Susan Nortonーa waitress who is his love interest in the film who eventually falls victim to one of the vampires. Aside from them, the horror mystery also included appearances from Donald Sutherland, Rutger Hauer and James Cromwell, all of whom played lead characters as well.

Premiered on TNT on June 20, 2004, Salem’s Lot ran for two episodesーspanning just a little over three hours. Produced on a budget of $25 millionーwhich is considerably high for a television series, it has become a classic for many Stephen King fans. Although it didn’t follow the novel exactly, most viewers agreed that Rob Lowe did an excellent job at portraying the principal character. For her portrayal of Susan Norton, Mathis was nominated for a Saturn Award for the “Best Supporting Actress on Television” category.

This year, the actress will be starring in a couple of different moviesーone of which is Duncan Skiles’ Clovehitch (2017). Although it is currently in post-production, no details about its plot have been released to the public as of yet. Having said that, its cast list has been revealed; according to it, the film will also be featuring appearances from Charlie Plummer, Dylan McDermott, Madisen Beaty and Brenna Sherman.

Judging from Mathis’ IMDb page, it looks like she will also be breaking into the horror genre in the film, Boarding School (2017). Written and directed by Boaz Yakin, it will also star Tammy Blanchard, Robert John Burke, Will Patton, Sterling Jerins and David Aaron Baker. No official release date has been a announced so far.

If you’d like to stay up-to-date and connected with the blonde beauty, you can do so by following Samantha Mathis on social mediaーyou can find the star herself on Twitter at @samanthamathis.