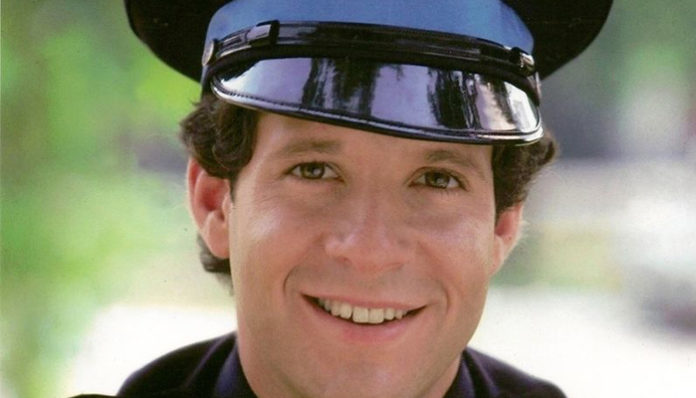 Born in New York, American actor Steve Guttenberg is probably best known for his roles in Police Academy (1984), Short Circuit (1986), and Three Men and a Baby (1987). Like some of the other artists out there, Guttenberg has his roots in theatre. As a teen, he enrolled in a summer program at the prestigious Julliard Schoolーit was then that he performed in his first off-Broadway production, The Lion in Winter. At the age of nineteen, he made his big screen debut in the crime drama, Rollercoaster (1977) where he played an extra. Later that same year, Guttenberg appeared on television for the first time in the TV film, Something for Joey (1977). Continuing with his work as a budding actor, he went on to appear in a number of projects including The Boys from Brazil (1978), Family (1979), To Race the Wind (1980), Miracle on Ice (1981), No Soap, Radio (1982), and The Man Who Wasn’t There (1983). With some effort and a little bit of luck, he eventually landed a big break in 1984 when he was cast as a main lead in the comedy film, Police Academy.

Not only was it Guttenberg’s first major role in Hollywood, but it was also the first blockbuster hit that he had been a part of. Applauded for his performance in the film, he later returned to reprise his role in the subsequent instalments, Police Academy 2: Their First Assignment (1985), Police Academy 3: Back in Training (1986) and Police Academy 4: Citizens on Patrol (1987). To this dayーover three decades laterーit remains to be one of his most remembered portrayals on the big screen. Since then, the actor has amassed quite a fair amount of credits (86 to be exact) to his name; for instance, he has starred in 3 Men and a Little Lady (1990), Home for the Holidays (1995), Zeus and Roxanne (1997), P.S. Your Cat Is Dead (2002), and Veronica Mars (2005), to name a few. A Daytime Emmy Award-nominee, Guttenberg has also received a Gold Derby TV Award and a Feature Film Award from the New York International Film Festival.

Aside from acting, the Walk of Fame-inductee has also participated in various reality TV series over the years including Diner: On the Flip Side (2000), Soapstar Superstar: Bonus Tracks (2007), and Dancing with the Stars (2008). A well-respected artist, Guttenberg has been invited onto numerous talk shows such as Late Night with David Letterman (1992), The Tonight Show with Jay Leno (1997), Howard Stern (2003), Jimmy Kimmel Live! (2008), and The Late Late Show with Craig Ferguson (2012). In the recent years, he has also been part of the documentaries Drew: The Man Behind the Poster (2013), and Inside Edition (2015).

So what has the New Yorker of Police Academy fame been up to since then? What new roles and parts have he taken on recently? What projects have he been busying himself with lately? What happened to Steve Guttenberg? Where is he now in 2018? 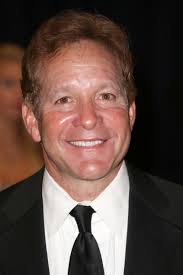 Born on August 24, 1958 in Brooklyn, New York, Steve Guttenberg (Birth Name: Steven Robert Guttenberg) is the son of Jerome, an electrical engineer and Ann Iris, a surgical assistant. Growing up, he spent most of his youth in North Massapequa with his parents and two sisters. As a teen, he went to the local Plainedge High School. While he was still a student there, he enrolled in a special program offered by the renowned Julliard School over the summer; it was then that he had the opportunity to study under the British-American actor, John Houseman.

After honing his skills, he eventually landed a role in the off-Broadway production, The Lion in Winterーwhich was also his first time performing on stage. Following his high school graduation in 1976, Guttenberg moved to Los Angeles, California to chase his dreams of becoming an actor.

Having only $300 to his name, he settled in the new city and immediately began looking for work opportunities. As luck would have it, he was soon cast in a television commercial for Kentucky Fried Chicken where he starred alongside Colonel Sanders. From there, Guttenberg eventually made his film debut in Rollercoaster (1977) as an extra. Soon afterwards, he broke into the television scene in the TV film, Something for Joey (1977). Continuing to audition for various roles, the aspiring actor then appeared in small roles in the movies The Chicken Chronicles (1978), and The Boys from Brazil (1978).

In 1979, he landed his first title role in the comedy series, Billyーone which he portrayed for seven episodes. Carrying on with his show business career into the 1980’s, he appeared in To Race the Wind (1980), Miracle on Ice (1981), No Soap, No Radio (1982) and The Man Who Wasn’t There (1983). By then, his luck began to change; in 1984, he received a breakthrough with the comedy flick, Police Academy when he was cast as the principal character in the film. 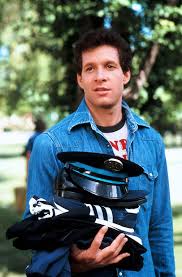 Guttenberg’s first major role in Hollywood, Police Academy was a massive hit at the box office. Directed by Hugh Wilson, the comedy centered around a group of good-hearted yet slightly incompetent individuals who train to enter the police academy; to their dismay however, the strict instructors at the institute will have absolutely nothing to do with their pranks.

Playing one of the main academy cadets, the actor took on the role of Carey Mahoneyーa man who despite his easy-going personality, often finds himself brushing with the law while standing up to arrogant people. After another one of these run-ins, he is offered a chance to join the police forcer as an alternative to prison. Besides Guttenberg, Police Academy also featured actors Kim Cattrall, Donovan Scott, Bubba Smith, Michael Winslow, and Andrew Rubin.

Made available in theatres in March 23, 1984, Police Academy took in over $8.6 million during its initial weekend. Despite having opened at the same time as other high-profile comedy films such as Bachelor Party, Gremlins, and Ghostbusters, it easily snatched the number one spot at the box office. A huge commercial success, it later went on to gross more than $146 million worldwideー$81 million of which came from North America. In spite of its ticket sales however, opinion on the movie was mixedーgenerally, contemporary critics were more critical of the film while casual movie watchers gave more favourable reviews.

The following year, Guttenberg reprised his role in the sequel, Police Academy 2: Their First Assignment (1985). Created under the direction of Jerry Paris, it revolved around the same crew from the original film as they try to stop a new gang from causing trouble in town after their graduation. For the movie, most of the actors from Police Academy returned to reprise their roles including Bubba Smith, Marion Ramsey, David Graf, George Gaynes and Michael Winslow. In addition to the old cast, the spin-off also featured a few new facesーBobcat Goldthwait, Howard Hesseman, Art Metrano and Tim Kazurinsky.

Officially released in theatres on May 29, 1985, Police Academy 2: Their First Assignment was another financial hit, earning more than $10.6 million during its opening week ($2 million more than what its predecessor was able to achieve). By the end of its theatrical run in the United States, the comedy had earned a total of $55 million across 1600 screensーmaking it the 11th highest-earning film of 1985 in the country at the time. Adding to that the ticket sales from overseas, the film ended up grossing more than $61.6 million worldwide. Like many sequels however, Police Academy 2: Their First Assignment was deemed inferior than its original; upon its release, it was met with mostly negative reviews. While some viewers described it as a guilty pleasure, most agreed that the premise left something to be desired. 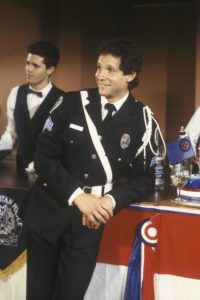 A year later, the third sequel, Police Academy 3: Back in Training (1986) was released. Once again directed by Jerry Paris, it revolved around the group as they return to the Police Academy to train new recruits, in attempts to prevent its closure. Similar to the previous film, it saw the return of many of the original actors; of course, Guttenberg was back reprising his role as Sergeant Carey Mahoney. Joining the cast in the new movie were Debralee Scott, Brian Tochi, Shawn Weatherly, and David Huband.

Filmed primarily in Toronto, Canada, Police Academy 3: Back in Training reached the theatre screens on March 21, 1986. Proving to be yet another hit, it earned over $9 million in its opening weekend and managed to top the box office at number one. The 17th highest-earning film of its year, it eventually grossed a total of $43.5 million worldwide. Despite the financial success that it enjoyed, the comedy was met with less-than-ideal reviewsーthe general consensus being that it is simply not as funny as the previous movies.

In 1987, Guttenberg reprised his role as Mahoney for the last time in the fourth sequel, Police Academy 4: Citizens on Patrol. The first of the series to be directed by Jim Drake, it focused on the Police Academy graduates as they are tasked with training a group of newly-recruited civilian officers. Aside from its regular cast, the movie also welcomed the return of G. W. Baileyーwho hasn’t appeared since the first instalment. Also noteworthy is the fact that professional skateboarder, Tony Hawk made a cameo appearance in the film as a double.

Released theatrically in the United States on April 3, 1987, Police Academy 4: Citizens on Patrol debuted at the top of the box office, grossing over $8.4 million in its opening weekendーthe lowest amount so far for the franchise. Nonetheless, the film went on to gross more than $28 million altogether by the end of its run. Despite its financial earnings, the movie was considered a bomb; universally panned by contemporary critics, it currently holds a 0% approval rating on Rotten Tomatoes. 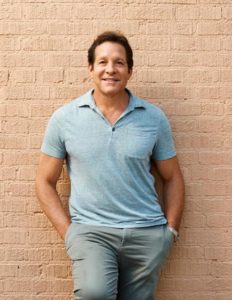 From the looks of his IMDb page, the actor has many projects waiting to be released this year. For one, he will be appearing in the comedy drama, Lez Bomb (2017) alongside Cloris Leachman, Bruce Dern, Elaine Hendrix and Kevin Pollak. Written and directed by Jenna Laurenzo, it will depict the story of a young closeted woman who brings her girlfriend home for the first time during Thanksgiving.

Besides that, he will also be starring in Scott Smith’s comedy, Death: Take 2 (2017). Currently in post-production, the film will star Guttenberg as a hardcore record collector; other members of the cast include John Lovitz, Anna Maria Horsford, Grant Rosenmeyer, and Chelsea Tavares.

If you’d like to stay up-to-date with the man of Police Academy fame, you can do so by following Steve Guttenberg on Twitter at @steveguttbuck.