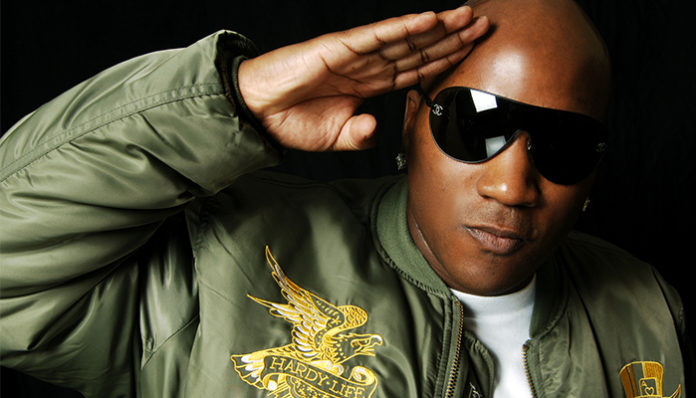 Hailing from Atlanta, American rapper Young Jeezy first broke into the music scene in 2001 with his independent album, Thuggin’ Under the Influence (T.U.I.). Although life dealt him a less-than-ideal hand, him and his family having spent many years in poverty in a rough part of town, Jeezy had always been determined to make something big of himself. Drawn to hip hop music as an adolescent, he eventually entered the music business in 1998, after establishing Corporate Thugz Entertainment with his close friend, Demetrius Ellerbee. While his original intention was to work behind the scenes as a producer, Jeezy soon felt the need to enter the community himself as a positive voice within the black, hip-hop community. With that, he began recording various mix tapes. Under his own label, he released his first independent album, Thuggin’ Under the Influence (T.U.I.) in the summer of 2001. From there, he later went on to released a second album entitled, Come Shop wit Me in 2003ーalso under his own independent label.

However, it ultimately wasn’t until the mid 2000’sーafter he signed with Def Jamーthat his career as a rapper began to take off. In 2005, he dropped his debut studio album, Let’s Get It: Thug Motivation 101. A smash hit, it quickly rose to the top of both the R&B/Hip Hop Albums Chart and the Top Rap Albums Chart in the United States. Since then, Jeezy has gone on to release seven full-length albums, twenty eight music videos and well over thirty singlesーmany of which have attained RIAA certification. To date, his most-successful track remains to be that of the 2x Platinum certified Put Onーa collaboration that he recorded with fellow artist, Kanye West in 2008. A well-accomplished musician and four-time Grammy Award nominee, he has accumulated a fair amount of awards including a Billboard R&B/Hip-Hop Award (e.g. Top R&B/Hip-Hop Artist – New), a BET Hip-Hop Award (e.g. Best Collabo, Duo or Group), and three Dirty Awards (e.g. Most Bootlegged CD).

So what has the Grammy Award-nominated artist been up to in the recent years? Has he put out any new hits as of late? What happened to Young Jeezy? Where is he now in 2018? 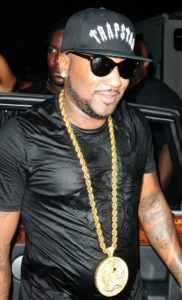 Born on September 28, 1977, in Columbia, South Carolina, Young Jeezy (Real Name: Jay Wayne Jenkins) was raised by his mother and maternal grandmother as his parents were not marred at the time of his birth. Growing up in poverty in a rough neighbourhood in Atlanta, he had a few brush-ins with the law  during his youth. A “hustler”, he often sold whatever he could get his hands on in exchange for moneyーincluding stolen goods, vehicles and even drugs.

Upon realizing that he did not want to spend his life in jail as a prisoner however, he soon made his way out of the street life. Focusing his attention on music instead, he eventually started a music company called Corporate Thugz Entertainment with his close friend, Demetrius Ellerbee aka “Kinky B”. Although his original intention was to work as a music producer behind the scenes, he later decided to become a recording artist himself.

Under his own independent label, the aspiring rapper released two albumsーThuggin’ Under the Influence (T.U.I.) (2001) and Come Shop with Me (2003), the former of which was released under the name “Lil’ J”. While they served as his entry into the music scene, the albums were not particularly successful. However his luck soon began to change in 2004ーthat summer, one of his demo-tapes landed into the hands of music executive, L.A. Reid. Recognizing Jeezy’s talents immediately, he swiftly signed him onto Def Jam Records. From there, he quickly headed off to the studio to begin working on his debut studio album. 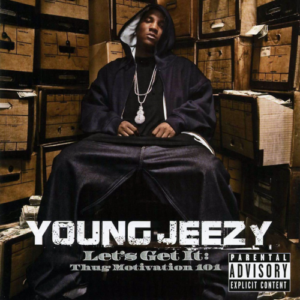 Under the label, he released his debut studio album entitled, Let’s Get It: Thug Motivation 101 on July 26, 2005. His first major label release, it featured the production of Kinky B, Shawty Redd, Midnight Black, Don Cannon, and many others. Proving to be a massive success compared to his earlier independent efforts, the album entered the US Billboard 200 at number two and sold over 172,000 units during its initial week.

Hailed as “one of the classic albums of the last decade” by Complex Magazine in 2012, it contained nineteen tracks, all of which were co-written by the rapper himself; a few stand-outs from the disc include Bottom of the Map, Get Ya Mind Right, Don’t Get Caught, Trap Star, Talk to ‘Em, and That’s How Ya Feel. Critically acclaimed, the album effortlessly catapulted Jeezy into music stardom. Given favourable reviews all around, it eventually reached number one on both the US Top Rap Albums Chart and the Top R&B and Hip Hop Albums Chart. As of 2005, it has received platinum accreditation from the RIAA for exceeding over a million copies in sales.

Following the success of his initial album, he dropped The Inspiration on December 12, 2006. His second studio album, it boasted sixteen tracksーa handful of which featured artists such as R. Kelly, Timbaland, Slick Pulla, and Keyshia Cole. Another major hit for Jeezy, it debuted at the top of the Billboard 200 and sold more than 352,000 copies in its first weekーa substantial improvement compared to that of Let’s Get It: Thug Motivation 101. Produced by L.A. Reid, DJ Toomp, The Runners and Drumma Boy, it featured the songs U Know What It Is, Streets on Lock, Bury Me a G, What You Talkin’ About, and The Inspiration (Follow Me), amongst many others. Lauded for its memorable and distinctive tunes, the album later also peaked at number one on the Top R&B/Hip Hop Albums Chartーmaking it Jeezy’s second album in a row to achieve such a feat. Given a four star rating from critics at AllMusic, it eventually went on to produce three singles: I Luv It, Dreamin’ and Go Getta. Just a month after its release, The Inspiration was certified Platinum by the RIAA in the US.

Two years later, Jeezy released his third full-length album, The Recession in September of 2008. Achieving yet another number one debut on the Billboard 200, it sold over 260,000 copies within the initial week of release. Once again produced by a team of musicians, it showcased eighteen different hip hop tracks including What They Want, Amazin, Don’t You Know, Word Play, and Don’t Do It. Similar to his earlier albums, The Recession also included guest appearances from featured artists such as Trey Songz, Kanye West, Nas and Lil Boosie. Favourably received, many critics gave it impressive reviewsーfor instance, both The Guardian and The Phoenix gave it a solid four star rating. Aside from being a chart-topper in the United States, The Recession also became Jeezy’s first album to chart in Canada, ranking in at number six on the Canadian RPM Albums Chart. Despite its popularity however, it did not achieve the same amount of sales compared to his earlier albums as it only managed to sell over 500,000 copies, earning it Gold certification from the RIAA. Nonetheless, it went on to spawn five singlesーMy President, Who Dat, Vacation, Put On, and Crazy World, all of which ended up charting in the US. 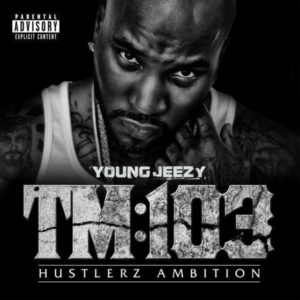 From there, it wasn’t until three years later that he released his next studio album, TM: 103 Hustlerz Ambition on December 20, 2011, after multiple delays. The final instalment of Jeezy’s Thug Motivation series, it was produced by Lil’ C, Mike Dupree, Mike Will Made It, and Warren G. Recorded between 2009 and 2011, it featured fourteen tracksーa handful of which featured artists such as Ne-Yo, Fabolous, Future, Snoop Dogg and Trick Daddy.

Upon its release, TM: 103 Hustlerz Ambition made it to number three on the Billboard 200, selling over 230,000 copies within the first week. Despite its success in sales however, it received a mix of mediocre and positive reviews; while some deemed it as “a step forward” for Jeezy, others described it as being “over-inflated and airless”. Regardless, the album still managed to climb up in ranks on the charts, peaking at number one on both the Hip Hop Albums and the Top Rap Albums Charts; it also settled in at number forty-five on the Canadian RPM Chart. As of January 2012, it has sold over 500,00 copies domestically, earning it Gold certification status from the RIAA.

In September of 2014, the American rapper released his fifth studio album entitled, Seen It All: The Autobiography. Featuring guest appearances form The Game, Akon, August Alsina, Jay Z and Future, it contained a twelve-song track list amongst which included What You Say, 1/4 Block, Holy Ghost, Enough, How I Did It (Perfection). Debuting at the second position on the US Billboard 200, the album eventually went on to sell over 121,000 copies during its first weekーwhich was a significant decline compared to his last album, which sold more than 230,000 copies units during the same time period. In spite of the drop in sales, Seen It All: The Autobiography was met with generally positive reviews; for instance, Now Magazine gave it four out of five stars while The A.V. Club deemed it as being “B-” grade. Even so, it produced two singlesーMe OK, and Seen It All.

It looks like the artist will have something new to rap aboutーfor he just got engaged to his longtime girlfriend and mother of his two-year-old daughter this past December. According to reports, Jeezy not only popped the question and adorned her finger with a ring, but also presented her with a brand new, Range Rover Sport! Congratulations to the R&B star and his bride-to-be!

In terms of music, Jeezy recently announced that he’s been working on a new album. The third instalment of his Trap or Die series, Snow Seasonーas its calledーwill be his eighth studio album. Although highly-anticipated by fans, no further details about the album have been released as of yetーall we know, is that it will probably come out sometime in 2017.

If you’d like to stay up-to-date and connected with the award-winning rapper, you can do so by following him on social mediaーyou can find Young Jeezt on Twitter or Instagram at @Jeezy.