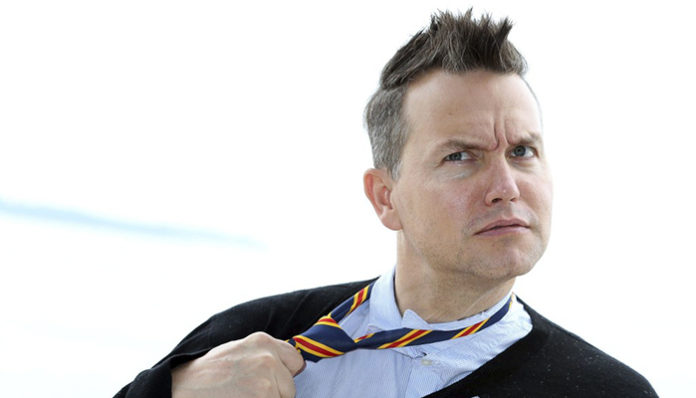 California-born musician Mark Hoppus is best known for being one of the main vocalists of the punk band, Blink-182. Growing up listening to rock music, he received his first guitar while he was in high school. Instead of taking formal lessons, Hoppus taught himself the ways of the stringed instrument by playing to bands such as Bad Religion and The Cure. Eventually adopting a style similar to that of Robert Smith, marked by red lipstick and black eyeliner, he started performing as a member of a band called Pier 69, with whom he sang a number of cover songs. After graduating from high school, he joined another group called Of All Things with a couple of friendsーa stint which he continued for many years. It wasn’t until his sister, Anne, introduced him to a friend by the name of Tom DeLonge that Hoppus’ life headed toward a different direction. Together with Delonge, the two went on to form a punk rock band called Blink-182.

Later recruiting drummer Scott Raynor, the group went on to record a handful of demo tapes, after purchasing a set of professional equipment. In the mid 90’s, they caught the attention of a local label called Cargo Music which agreed to sign the band on on a trial basis. From there, they eventually released their debut album entitled, Chesire Cat in the winter of 1995. However it wasn’t until two years later that they successfully broke into the music scene with their second release, Dude Ranch (1997). Over the next few years, Blink-182 released three more albumsーEnema of the State (1999), Take Off Your Pants and Jacket (2001), and Blink-182 (2003), after which they went on an indefinite hiatus. Eight years later, the band made their comeback with Neighborhoods which was released in the fall of 2011. Some of their hottest hits include: All The Small Things, I Miss You, Feeling This, and What’s My Age Again?.

Besides being a punk rock musician, Hoppus has also dabbled in acting. In 1999, he made his movie debut in the comedy, American Pie where he appeared alongside his bandmates, Scott Raynor and Tom Delonge. Later that same year, he also played a part in the made-for-television film, Shake, Rattle and Roll: An American Love Story (1999). Some of his other projects on screen include Haunted (2002), LiL DPC: The World of Richard P. Cummings Jr., (2010), CollegeHumor Originals (2012), Alternative Press Music Award Show (2014), and Those Who Can’t (2016). In 2003, he even appeared as himself in the popular animated series, the Simpsons (2003).

What has the vocalist of Blink-182 fame been up to these days? Is he still associated with the band? Has he come out with any new music material either as a solo or a group effort? What happened to Mark Hoppus? Where is he now in 2018? 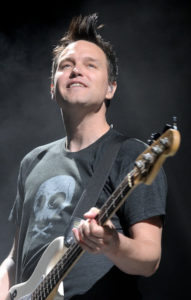 Born on March 15, 1972 in Ridgecrest, California, Mark Allan Hoppus is the son of Tex Hoppus and Kerry Wernz. When he was right years old, his parents divorcedーan event that had an unsettling effect on him. After shuffling between his mother and father’s respective homes for several years, he moved to live with the latter in the city of Monterey.

Due to the fact that his father was working towards a postgraduate degree in university however, Hoppus spent much of his early life alone at home. During junior high, he began listening to punk rock music. In his second year of high school, he was gifted a bass guitar; he later taught himself how to play the instrument by playing to the songs of Bad Religion, The Cure and the Descendants.

Eventually adopting a style similar to that of Robert Smith, marked by vivid lipstick and dark eyeliner, he began playing with a band called Pier 69. After graduating from high schoolーin which he was teased for his makeupーhe joined another music group called Of All Things, which he had helped to establish with a couple of his friends. Around that time, he also attended California State University in San Marcos, in attempts of becoming an English teacher upon graduation. Despite his initial plans, he eventually dropped out of college in the early 90’s. Continuing to play with various bands, it wasn’t until he was introduced to Tom Delonge by his sister Anne, that his life began heading toward a different direction. Together, the two eventually formed a new punk rock band which they coined Blink-182. Soon afterward, they recruited Scott Raynor into the group and began recording demo tapes. In 1993, they caught the attention of Cargo Musicーa local independent label, that offered them a recording contract on a trial basis.

Mark Hoppus’ Music Career as a Member of Blink-182 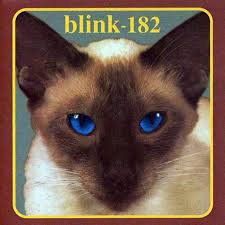 Blink-182 later released their debut studio album entitled, Cheshire Cat on February 17, 1995. Co-produced by the trio themselves, it featured Hoppus on bass, while Raynor took drums and Delonge played the guitar. Recorded at Los Angeles’ Westbeach Recorders, it contained sixteen tracks, most of which showcased the songwriting skills of Hoppus. Amongst the track-list in the albumーwhich was less than an hour in lengthーwere the songs, Touchdown Boy, Does My Breath Smell?, Romeo and Rebecca, Toast and Bananas, Wasting Time, and Just About Done.

Released during the breakthrough year for punk rock, Cheshire Cat brought the band much fame and success in the skate punk scene. To promote the album, Blink-182 also embarked on a tour, which saw them performing outside of California for the first time. A strong seller, it garnered many positive reviews from critics and earned them many fans in their native United States. Although it didn’t end up reaching the charts, it did go on to spawn two singlesーWasting Time and M+M’s. According to reports, over 250,000 copies of the album have been sold as of 2001.

On June 17, 1997, the pop punk band released their second full-length album, Dude Ranch. Their last record with the Cargo label, it was also the final album to feature Scott Raynor on drums before his departure from the group. Recorded at California’s Big Fish Studios, its production was handled by music producer, Mark Trombino. Preceded by its lead single, Dammit, the album consisted of fifteen songsーall of which were written by the members of the bandーincluding Hoppusーthemselves. A few of the included tracks include A New Hope, Degenerate, Voyeur, Enthused, Waggy, and Untitled.

Despite a relatively slow debut, Dude Ranch eventually began to pick up momentum with support from fans and the trio’s vigorous touring. Their first charting album in the US, it eventually peaked at number sixty seven on the Billboard 200 and number one on the Top Heatseekers Chart. By August of 1997, over 40,000 copies had been sold within the country. Although some critics lamented the album’s lack of passion and depth, others gave it more positive reviews, lauding it for its unique sounds. A decade after it was originally released, it was included in the Alternative Press’ list of “10 albums That Shaped the Punk of Today”. As of November 1999, Dude Ranchーwhich went on to spawn four singlesーhas received Platinum status from the RIAA. 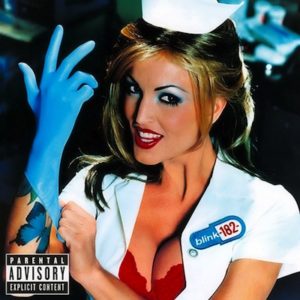 Two years later, their popularity catapulted with the release of their third album, Enema of the State. Produced by Jerry Finn, it was the first to feature Travis Barker on drums. Recorded in various studios in Los Angeles and San Diego, its tracks mostly revolved around relationships and breakups. Featuring Janine Lindemulder in a nurse uniform on the cover, it contained twelve songs cowritten by Hoppus including Going Away to College, Aliens Exist, Don’t Leave Me, The Party Song, Wendy Clear, Mutt, and Dumpweed.

An enormous success for the band, it sold four-times as fast as their preceding album, Dude Ranch. Blink-182’s best seller to date, it has since sold over 15,000,000 copies worldwide. Overwhelmed with nothing but positive reviews, Enema of the State received near-flawless ratings from publications such as Billboard, and The Rolling Stone. Considered to be one of the most influential pop punk albums, it has since been included in a number of “top lists” such as Kerrang!’s list of “51 Greatest Pop Punk Albums Ever”, where it ranked number one. Aside from having peaked at number nine on the US Billboard 200, the album also reached respectable spots in Australian, German, Italian, Irish, and Swedish charts. Enema of the State went on to spawn three singlesーAdam’s Song, All the Small Things, and What’s My Age Again?. As of February 2001, the album has gone Platinum five times in the United States.

Following the huge success that was their last album, they released Take Off Your Pants and Jacket on June 12, 2001. Recorded in San Diego, its contents have been regarded as being conceptual in nature, revolving around themes of adolescence. Produced by Jerry Finn, it consisted of thirteen tracks, some of which include Give Me One Good Reason, Everytime I Look For You, Story of a Lonely Guy, Online Songs, and Anthem Part Two. In support of the album, Blink-182 embarked on a worldwide tour which saw them performing in countries as far as Australia.

The first punk rock album to enter the US Billboard 200 at number one, it also peaked at the top of the Top Internet Albums Chart. Internationally, it also peaked impressively in Canada, Germany, Italy, New Zealand, the UK, and Switzerland. Widely acclaimed, Take Off Your Pants and Jacket received numerous positive reviews, many of which praised it for its catchy pop beats. For instance, contemporary music critic Robert Christgau gave it an A- rating and the Rolling Stone have the album a four out of five star rating. While it wasn’t as commercially successful as their 1999 album, it still went on to receive Double Platinum certification from the RIAA.

Since then, Hoppers and the rest of the band have released three more albumsーBlink 182 (2003), Neighborhoods (2011), and California (2016). Out of those however, only the first ended up going Platinum in the United States, having sold over two million copies. 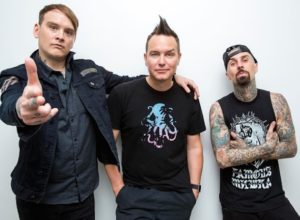 This January, Hoppus and the rest of the band had a pleasant surprise when the English rock band The 1975, surprised everyone by posting a cover of the song, Girls in the style of Blink-182. The 44-year-old vocalist even suggested that the groups should come together for a cover sometime in the future, in a subsequent tweet. Considering that, it’s probably fair to say that Hoppus is a fan of the Girls cover.

Aside from that, the punk rock group recently announced that they’ve been working on an upcoming project that may possibly “bring back sounds from the 90s”. Just a few days ago, the producer of Blink-182 shared a photo which included a glimpse of a possible, tentative track list. From what we can make out from the photo, it looks there will be Loneliness, Watch Me Die, 90’s, and Chasing A High. Stay tuned for more information on their big project!

If you’d like to stay up-to-date and connected with Mark Hoppus, you can do so by following him on social mediaーyou can find him on Twitter and Instagram at @markhoppus.