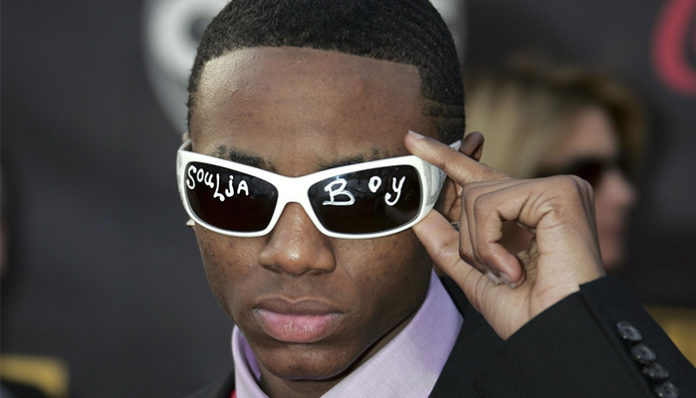 Soulja Boy is an American rapper who first rose to fame with the release of his debut album, Crank That (Soulja Boy) in 2007. Raised in the state of Atlanta, he developed an interest in hip hop early. Inspired by the music of DJ Dirty South, he eventually began performing his own songs. Later wanting to further explore his musical ambitions, Soulja Boy started to record songs at his father’s Mississippi music studio, which he later posted onto Soundclick. Steadily establishing a fan base, Soulja Boy later established a Youtube channel in the mid 2000’s. Known for his lyrical verses and convoluted rhymes, he released the track called Crank That, which quickly gained traction on the video sharing website. From there, it wasn’t long until he released his first independent album entitled, Unsigned & Still Major: Da Album Before da Album. In just a few short months, Crank That (Soulja Boy) had garnered its first airplay and had landed the aspiring rapper a recording deal with Interscope Records.

After signing with the label, Soulja Boy came out with his first professional studio album, Souljaboytellem.com later that same year in October 2007. Very much a successful release, it quickly established itself within the top five on the US charts; it has since sold close to one million copies within the United States. Following that, the rapper released his second studio album entitled, iSouljaBoyTellem in the winter of 2008. While its reception didn’t match that of his initial endeavour, the album still managed to chart within the top fifty on the US Billboard Top 200. Since then, Soulja Boy has dropped an additional album called The DeAndre Way in 2010. Aside from full length albums, he has also released over a dozen singles throughout his musical career; some of his most popular tracks include Crank That (Soulja Boy), Yahhh!, Kiss Me Thru the Phone, Pretty Boy Swag, Turn My Swag On, and Soulja Girl.

Over the years, the rapper’s original beats have been featured in several shows such as Parks and Recreation (2010), The X Factor (2010), Gossip Girl (2010), Boyhood (2014), and Scouts Guide to the Zombie Apocalypse (2015). On top of rapping, Soulja Boy has also tried his hand out at acting. In 2009, he made his television debut in an episode of the romance comedy, The Game. Since then, he’s also made made an appearance in the crime drama film, Officer Down (2013) which also served as his motion picture debut. In addition, the Illinois-native has been featured in a number of TV talk shows such as Jimmy Kimmel Live! (2009), Late Night with Jimmy Fallon (2009), The Mo’Nique Show (2010), and The Bachelorette (2013).

What is the 26-year-old rapper doing nowadays? Where has his career brought him in the recent years? What happened to Soulja Boy? Where is he now in 2018? 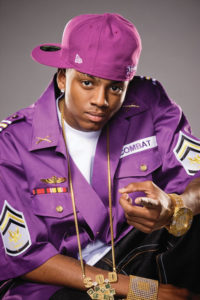 Born on July 28, 1990 in Chicago, Illinois, Soulja Boy (Birth Name: DeAndre Cortez Way) is the son of Tracy and Lisa Way; he is the second oldest out of three brothers. Growing up, he spent the first few years of his childhood in Chicago, prior to moving to Atlanta with his family at the age of six. Coincidentally, it was also around that time that he started to develop an interest in rapping. Pursuing his newfound hobby over the next few years, it wasn’t uncommon for Soulja Boy to spend hours every day performing and recording his own beats. Eventually wanting to pursue rapping further, he moved to  Batesville, Mississippi, where his father had owned a recording studio. By the time he was fifteen, he had posted his first songs on Soundclick, a music-based social community.

From there, the aspiring rapper quickly began to attract the attention of the world; upon garnering dozens of positive reviews on his Soundclick page, Soulja Boy eventually established a Youtube Channel in 2006, where he shared more of his musical creations. In March of 2007, he recorded a song called Crank That which he subsequently shared with his fans online; little did he know at the time that its popularity would later ultimately propel him to superstardom. Critically acclaimed, his first track from May was then followed by the release of an independent album entitled, Unsigned & Still Major: Da Album Before da Album which was accompanied by a short video. Having convinced hip hop producer Mr. Collipark, Soulja Boy later landed a recording contract with Interscope Records. 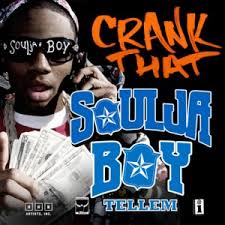 On October 2, 2007, Soulja Boy released his first major album, Souljaboytellem.com. Recorded in three separate studios, the production was partly handled by the rapper himself with help from Arab, Mr. Collipark, The Package Store and Los Vegaz. Preceded by its lead single, Crank That (Soulja Boy), the disc contained a total of fourteen tracks some of which included Pass It To Arab, Booty Meat, She Thirsty, Don’t Get Mad, Sidekick, Snap & Roll, Let Me Get Em, and Report Card. In addition to boasting a number of songs all of which are either written or co-written by Soulja Boy, the album also featured fellow artist Arab in a handful of titles.

Upon hitting the stores, Souljaboytellem.com entered the US Billboard Top 200 at number four, rendering it a relatively successful debut. By the end of its first week, it had sold approximately 117,000 copies within the United States. Shortly afterward, the album also peaked at number four on the US Top R&B and Hip Hop Albums Chart and at number one on the US Top Rap Albums Chartーmaking it his first chart topper. Internationally, his initial endeavour also managed to reach the charts in New Zealand, France, and the UK. A commercial hit, the album went on to spawn a total of four singles; while the lead single, Crank That (Soulja Boy) topped the Billboard Hot 100 for over seven weeks, the other three Soulja Girl, Yahhh!, and Donk! also managed to peak within the top 50 on the Hot R&B and Hip Hop Albums Chart.

Despite that however, reactions from critics were generally negative. Although Robert Christgau graded the album an A-, other publications such as Entertainment Weekly and Exclaim! Magazine gave Souljaboytellem.com a much lower rating, criticizing its contents to be both trite and monotonous. Nevertheless, the album has since sold close to a million copies in the United States. 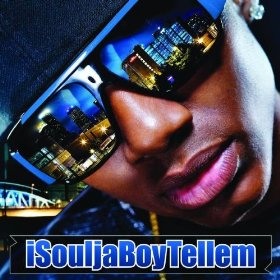 The following winter, the rapper dropped his second full-length album entitled, iSouljaBoyTellem, also under Interscope Records. Featuring the production of Soulja Boy himself, as well as Zaytoven, Jim Jonsin, and the Drumma Boy, among others, the southern hip hop album came complete with sixteen tracks including Hey You There, Wit My Yums On, Soulja Boy Tell’Em, Rubber Bands, and Shoppin’ Spree. Much like his previous effort, it also featured guest appearances from several other artists such as Juney Boomdata, Sean Kingston, Sammie, Shawty Lo, Gucci Mane and Yo Gotti.

Although not as successful as his debut, iSouljaBoyTellem still managed to enter the Billboard 200 at number forty three shortly after its release; during the first week of sales, it sold over 46,000 copies. A few weeks after being made available, it also charted at number eight on the Top R&B and Hip Hop Albums Chart and at number eighteen on the Top Rap Albums Chart; overseas, it peaked at number ninety-four in the UK. Soulja Boy’s second album went on to produce three singles, Turn My Swag On (number nineteen on the Billboard Top 100), Kiss Me Thru the Phone (Feat. Sammie) (number three on the Billboard Hot 100), and Bird Walk (number two on the US Bubbling Under Hot 100). On top of that, the album later also spawned two music videos, one for Gucci Bandanna and another for Soulja Boy Tell’Em, the latter of which featured Shawty Lo and Gucci Mane.

Still, iSouljaBoyTellem was met with mostly negative reviews. Judging from the many reviews written by music critics, the general consensus was that many felt that it featured “recycled material” from his earlier album. To put things into perspective, both Robert Christgau and the Rolling Stone gave the album a lacklustre two star rating. 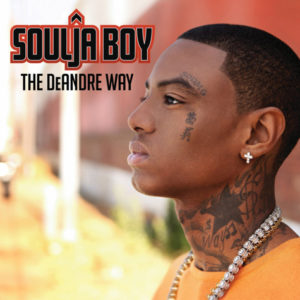 Two years later, Soulja Boy came one with his third studio album, The DeAndre Way on November 30, 2010. His first album that did not feature any production work by his mentor Mr. Collipark, it is also currently his shortest album to date, consisting only of ten tracks (standard edition). Approximately thirty-five minutes in length, it track listing included beats such as Blowing Me Kisses, Mean Mug, 30 Thousand 100 Million, Pretty Boy Swag, First Day of School, Touchdown, and Hey Cutie. Out of its track list, a small handful also featured appearances from Trey Songz, Lil B, Arab, 50 Cent, and Ester Dean. In contrast to the standard edition, the deluxe version of the album contained four bonus tracks: Xtra, Do It Big, Boom, and Steez.

In terms of its debut, The DeAndre Way entered at number ninety on the Billboard Top 200ーmarking a significant drop from his preceding albums. By the end of the first week, only 13,300 copies had sold within the United States. Having said that, it did eventually manage to reach number eighteen on the R&B and Hip Hop Albums Chart and number eight on the US Top Rap Albums Chart. While it’s Soulja Boy’s lowest-selling album, having only sold 100,000 copies as of 2016, it interestingly enough garnered more positive reviews from critics compared to his earlier albums; for instance, Slant Magazine gave it a three and a half star rating, describing it as a”solid effort” from the rapper. Similarly, The Washington Post and Entertainment Weekly also gave The DeAndre Way favourable ratings.

As for singles, the album spawned three titles, Pretty Boy Swag, Blowing Me Kisses, and Speakers Going Hammerーthe first of which proved to be most popular, having reached number thirty four on the Billboard Hot 100 and number six on the Hot R&B and Hip Hop Songs Chart with over 1,000,000 sales within the US.

A few weeks ago, Soulja Boy announced that his upcoming fourth album will be called Draco; the cover art and release dateーwhich has been revealed to be February 21, 2017ーwas also posted onto his official Instagram account. According to reports, it will be Soulja Boy’s first album with Cash Money Records.

In other news, the rapper recently shared some happy news with his fansーthe 26-year-old rapper will soon become a father. In an exciting Instagram post made on February 7, 2017, he shared the ultrasound of his unborn child with fans. To the disappointment of some however, Soulja Boy did not reveal the gender of his childーwill it be a boy or a girl? We will just have to wait and find out.

If you’d like to stay up-to-date and connected with the professional rapper, you can do so by following Soulja Boy on social mediaーyou can find him on Instagram or Twitter at @souljaboy.