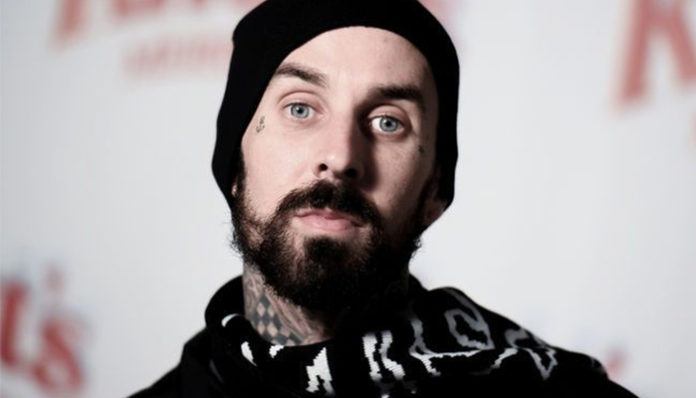 A well-respected musician, Travis Barker is probably best known for being the drummer of the American rock band, Blink-182. Given his first drum kit at the age of four, he later began taking lessons by the time he was five, in which he was exposed to a variety of playing styles. Wanting to further his musical experiences, he eventually took up the trumpet and piano, prior to singing briefly as a member of a madrigals choir. A student at Fontana High School, Barker was a member of the marching band and jazz ensemble; during that period, he also won a drum-off battle between himself and his best friend, Manuel Solorzano at a school talent show. Following that, the aspiring musician got himself involved in a number of festivals and regional competitions, amassing a lot of experience on the way. In the early 90’s, he joined a punk band called the Aquabats, with whom he performed with for several years, before joining Blink-182 in the fall of 1997.

In 1999, the group released their third studio album, Enema of the Stateーwhich was the first to feature Barker on drums. A massive hit, it found its way onto numerous charts and has since sold more than 15,000,000 copies worldwide. Since then, Blink-182 has released four more albums including Take Off Your Pants and Jacket (2001), Blink-182 (2003), Neighborhoods (2011), and California (2016). Out of the twenty-two singles which they’ve recorded, a few of their most popular tracks include All the Small Things, Feeling This and I Miss Youーall of which have earned certification from the RIAA in the United States. One of the most popular punk groups in the 2000’s, they garnered numerous awards including a Kids’ Choice Award (e.g. Favorite Band), two MTV Europe Music Awards (e.g. Best New Act, Best Rock), a Teen Choice Award (e.g. Choice Music: Love Song), and two Kerrang! Awards.

Aside from his work with Blink-182, Barker has also collaborated and recorded with several other artist including the Transplants, +44, TRV$DJAM, Expensive Taste, and Box Car Racer. After signing with Interscope Records in 2011, the musician also released his first solo debut album, Give the Drummer Someーwhich proved to be a moderate success. In addition to his musical endeavours, he has also made himself known as an actor in a handful of TV series; for instance, he’s appeared in The Simpsons (2003), CS: Crime Scene Investigation (2006), Kid Cudi: Day ‘n’ Nite (2008), Rally On (2012), and Ultimate Aquariums (2012). Talented and skilled, Barker has also been featured as a musical guest in multiple shows such as The Tonight Show with Jay Leno (2011), The 55 Annual Grammy Awards (2013), and The Tonight Show Starring Jimmy Fallon (2016).

So what has the drummer of Blink-182 fame been up to lately? Has he released any new musicーeither as a solo project or a collaboration with another artist? What happened to Travis Barker? Where is he now in 2018? 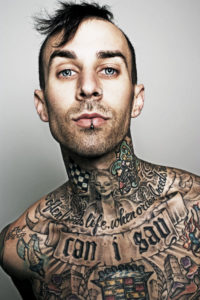 Born on November 14, 1975 in Fontana, California, Travis Landon Barker is the son of Gloria and Randy Barker; he is of Italian, English and Irish descent. When he was four years old, he was gifted his first drum set by his mother. With the kitーwhich he used until he was fifteenーBarker eventually took up drumming lessons at the age of five, studying under the wing of Michael Mai, who exposed him to various playing styles.

Wanting to experiment with other instruments, he eventually also took up the trumpet, and the piano during junior highーat one point, he even joined a madrigals choir. Aside from music, Barker also had a vast amount of other hobbies such as skate boarding and surfacing; in fact, he had considered becoming a professional skateboarder/professional surfer in his teen years.

A student at Fontana High School, he self-described himself to be a “stoner” during his time at the largely Hispanic-based institute. Just a few months before he started High School, his mother had died from cancer; prior to her passing, she had encouraged Barker to follow his dreams and to continue pursuing music. Keeping her words in mind, he later joined the marching band and jazz ensemble at school. During that time, he also challenged his best friend Manuel Solorzano to a drum-off, from which he ultimately emerged as the winner. Following his high school graduation, the aspiring musician worked as a trash man during the day and played with various local bands at night. In 1994, Barker co-founded a punk music group called the Aquabats with a few friends; together, they performed a number of local shows over the next few years.

In 1997, they found themselves touring the country alongside Blink-182, a San Diego-based rock band. As it happened, their drummer had departed suddenly after having dealt with their exhausting touring schedule for a period of time. With that, Blink-182 enlisted the help of Barker on percussions; although the arrangement was initially intended to be temporary, Barker later joined the band, effectively replacing their old drummer. 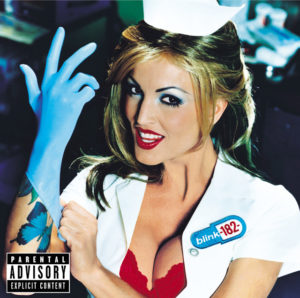 On June 1, 1999, the rock band released their third studio album entitled, Enema of the Stateーit was their first to include Barker in their lineup. Produced by Jerry Fin, a veteran punk rock producer, it boasted a number of fast-paced tempos which lyrically, revolved around the themes of adolescence and relationships. Recorded over a period of three months, the album consisted of twelve songs including Don’t Leave Me, Going Away to College, Dysentery Gary, The Party Song, and Wendy Clearーall of which featured Barker on drums.

A smash hit, Enema of the State quickly overshot the success of Blink-182’s earlier albums. Upon its release, it was extremely well receivedーall of which hailed it as the band’s major breakthrough. Described to be “bristling with attitude” by Billboard, the album also received glowing reviews from many big-name publications such as the Rolling Stone, Chicago Sun-Times, and The Village Voice. In the United States, Enema of the State peaked at number nine on the Billboard 200 and at number three on the Top Internet Albums Chart. Met with similar success overseas, it also charted in over ten different countries including Canada, Austria, New Zealand, Australia and Germany. Having spawned three singlesーWhat’s My Age Again?, All the Small Things, and Adam’s Song, it has since received 5x Platinum Certification from the RIAAーmaking it the band’s most-successful album to date. 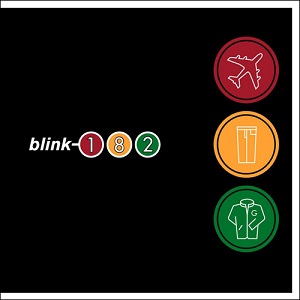 In the summer of 2001, Barker and the rest of the band released their next full-length album, Take Off Your Pants and Jacket. Recorded at San Diego’s Signature Sound Studios, it once again featured the same pop punk sounds that originally made the group famous. Largely a concept album, its lyrics mostly chronicled teen life, and fighting authority. Another production by Jerry Finn, its disc consisted of a thirteen-song track list; a few titles include Story of a Lonely Guy, Roller Coaster, Everytime I Look for You, Please Take Me Home, and Give Me One Good Reason. In support of the album, Blink-182 colined Green Day’s Pop Disaster Tour, although the European leg was eventually canceled in the wake of 9/11.

Another success for the band, Take Off Your Pants and Jacket entered the Billboard 200 at number oneーmaking it the first punk rock album to achieve such a feat. Within the first week, it quickly sold over 350,000 copies in the United States; shortly afterward, the album also found its way to the number one position on the Top Internet Albums Chart. Much like their previous effort, the chart topper was a quick seller in a number of oversea countries; for instance, it also peaked at the top of the Canadian and German Albums Charts, and charted at number four in the UK, Switzerland and Italy. As of May 2002, the album has been certified 2x Platinum for exceeding 2,000,000 in sales. Worldwide, Take Off Your Pants and Jacket has sold well over 14,000,000 copies.

Since then, Barker has contributed to three more of Blink-182’s studio albumsーBlink-182 (2003), Neighborhoods (2011), and California (2016). Although they didn’t rival the success of their earlier releases per se, all three did manage to reach impressive rankings on the music charts (the most successful being that of their self-titled album, which went on to sell 7,000,000 worldwide). 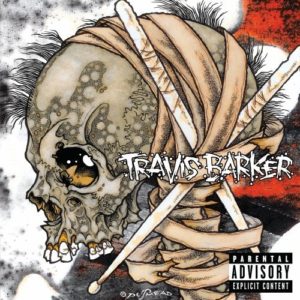 After signing with Interscope Records, a subsidiary of the Universal Music Group, Barker released his first solo debut album, Give the Drummer Some on March 15, 2011. Although it was originally scheduled for a September 2010 release, the release date ultimately ended up being pushed back until the spring of 2011. Aside from the drummer himself, who served as the album’s executive producer, it also featured the production of Kool Kojak, The Neptunes, Kid Cudi, Steve Aoki, Corey Taylor, and EDIT. A hip hop album, it contained twelve tracksーall of which were collaborations with other artists; some of the featured musicians include Snoop Dogg, Ludacris, The Cool Kids, Kid Cudi, Beanie Sigel, and Pharrel.

On the day of its release, Give the Drummer Some opened at number nine on the Billboard 200; by the end of the first week, it had sold approximately 28,000 copies in the US. Rated a three-star album by critics at Allmusic, it eventually reached number two on both the US Rap Albums and the R&B and Hip Hop Albums Charts. Outside of the United States, it also managed to chart in the UK, France, Canada and Australia. In support of the album, a handful of video music videos were releasedーthe first of which was Jump Down, which premiered on Youtube in October 2010; the rest were made available in the subsequent months. As of January 2017, Give the Drummer Some is the only solo album that Barker has released.

Following that, the drummer has collaborated with several artists (e.g. Transplants, Yelawolf, Asher Roth and Nottz) for a number of releases, although he hasn’t put forth any new solo material. 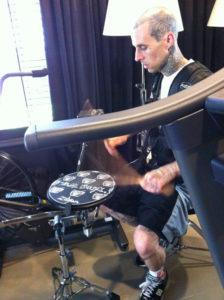 As a member of Blink-182, Barker recently received his first Grammy Award nomination for the band’s latest album, California (2016). In a later interview with KROQ, the drummer exclaimed that although he’s been a part of the Grammy ceremonies many times before, “it’s a lot more insane” now that his groupーa band he plays with, has been recognized with a nomination themselves. According to Barker, ever since the band returned from their California tour, they’ve been working tirelessly at the studio for their upcoming “deluxe album”. Considering their busy schedule however, it’s probably fair to say that we won’t be seeing it in stores for a while.

In other news, Barker has also helped to produce and organize an upcoming three-day tattoo and music festivalーcalled Travis Barker’s Musinkーwhich is set to take place this March in Costa Mesa, California.

If you’d like to stay up-to-date and connected with the drummer of Blink-182 fame, you can do so by following Travis Barker on social mediaーyou can find him on Twitter and Instagram at @travisbarker. Don’t forget to also check out his official Facebook page at @travisbarkerofficial!