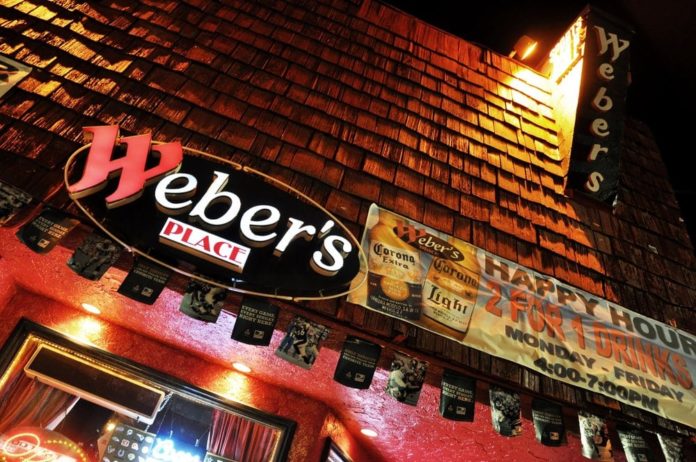 In 2007 barber shop entrepreneur Kervin Cinton pooled his earnings and purchased the 40-year-old establishment named Weber’s Place in the Los Angeles suburb of Reseda. Cinton turned the place into a prime entertainment venue and hired bands to draw the crowds in.

Unfortunately Weber’s Place was crushed by the better music haunts in nearby Hollywood, and Cinton’s habit of booking too many bands made the bar bleed money. Aside from that the establishment, being a former failed strip club, has no clear identity and the owner never bothered in redecorating the place. Some of the employees blatantly stole money and liquor from Cinton because they know that the owner won’t even lift a finger to stop them. In fact he won’t even reprimand his bartenders when they were not performing their duties.

As Cinton’s $500 grand investment was not showing any signs of improvement he decided to call for Jon Taffer and Bar Rescue for help.

Taffer brought in two experts to aid him in this rescue namely mixologist Michael Tipps and chef Keith Jones, and the latter was sent to the bar to gain a customer’s perspective on things.

The first few errors were committed by the bartenders. Not only did they scoop ice out of the cooler using glassware, they also delayed their serving time to watch the live band perfor. The kitchen staff was inefficient and the quality of food was lackluster. Taffer entered the bar and met with Cinton, and in their discussion the Bar Rescue host learned that the owner didn’t fire the employees that stole from the bar.

Jones toured the kitchen and saw filth accumulating on the shelves where the ingredients are placed, old grease being used on the fryers, and malfunctioning equipment being used for improper food storage. In the bar area Tipps was greeted by the same unsanitary conditions on the counter. Taffer’s wrath was roused when he found a dirty rag at the bottom of the cooler where the beer bottles were kept and one of the bartenders named Rodiah had the gall to laugh at the matter, not to mention being disrespectful as well.  The employees, except Rodiah who was sent away by Taffer, were then ordered to clean every nook and cranny of Weber’s Place.

The next day Taffer and the experts returned to the bar which was now spotless. Taffer confronted Cinton about the massive losses incurred by liquor overpouring which was an eye-opener for the owner. Cinton discussed the matter with his remaining bartenders and axed Mario, the employee on duty during the night when the bar lost $700. The firing effectively sent a message to the other bartenders that Cinton was no longer a softie unlike before.

Tipps then taught the bartenders a handy tip to ensure that they poured the right amount of booze, and at the same time the expert watched the employees closely to gauge their capabilities. In the kitchen Jones tutored chef Van with the right food storage practices. At nightfall Taffer subjected Weber’s Place to a stress test to find out the areas that needed his attention.

Customers poured in and Tipps found the first weak spot in the form of bartender Tyler who was struggling with the basics in bartending. Cinton was actively managing his staff particularly the server Leila but he was doing it too much that it actually put pressure on her instead of helping her out. Van moved at a snail’s pace in the kitchen as the orders piled up, and the overworked fryer ended up not cooking some of the dishes. Some of the customers even found hair on their food. Taffer had Leila work on the bar area as the bartenders were not exhibiting competence under pressure. She proved to be a fast learner and was a capable mixer behind the counter.

After the stress test Taffer conceptualized the bar’s theme with the experts and they agreed on giving Weber’s Place a Caribbean twist, given Cinton’s ancestry, and making it less dependent on live bands. The food items were diversified according to the theme with fewer fried items to lessen the stress on the fryer. As for the drinks the new cocktails featured fresh fruit with lower alcohol content to encourage the patrons to order more.  Taffer straightened out the problem with theft by giving the keys to the liquor vault only to Cinton and manager Joe, and the experts trained the employees with the revamped menu.

Taffer and his team tore apart Weber’s Place and renovated it into Weber’s Rum Bar & Grill, finally giving the place an identity of its own. The façade’s color was changed from red to gray and light green. The same colors adorn the interior with a bit of red, blue, and black. Decorative fruit adorn the counter with potted plants and flowers on some corners to make the place fresher. Shutters were installed on the windows and the obnoxious giant lip on the kitchen was replaced with a simple rectangular border. A TouchTunes jukebox was installed on the wall so there will always be music in the absence of a live band, and CCTV cameras on the bar area ensure tighter security with the feeds viewable from a smartphone.

Additional tables and chairs were installed on the stage area to accommodate more patrons. The furniture and the decorative pieces on the area can be easily set aside if ever a band was set to perform. In the kitchen a new refrigerator was installed next to the fryer to cut down time spent by Van running back and forth for ingredients.

Cinton welcomed the patrons to his new bar on the relaunch and the sudden influx quickly overwhelmed Tyler, forcing Taffer to swap him with Leila who quickly adapted to the new cocktails. Van exhibited faster meal preparation and her dishes were warmly received by the customers. Cinton was more confident than before and he was no longer overbearing on his employees.

Weber’s Place Now in 2018 – The After Bar Rescue Update

Two months later Cinton reportedly hired Mario back into the fold for reasons unknown, and actively booked bands every week. However the management did not make any comment in regards to sales.

The bar’s name was changed to Weber’s Sports Bar & Grill and their reviews plummeted after the rescue. Criticism was aimed towards service with some of the reviewers pointed out that the employees were unable to serve most of what’s on the menu, and the extremely long serving times. Someone also pointed out that the changes made by Bar Rescue were scrapped.

Weber’s closed its doors for good around July 2013 with dozens upon dozens of negative reviews.