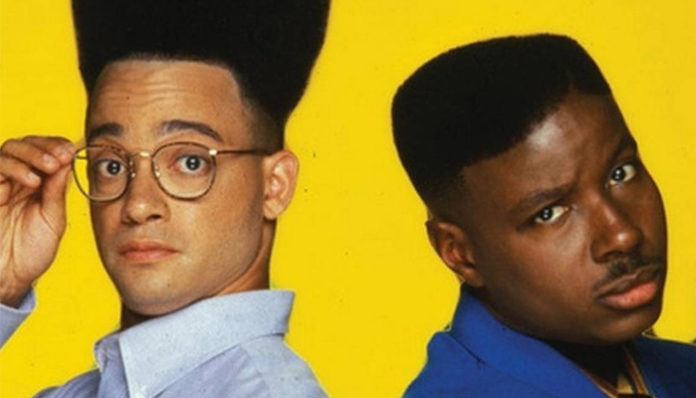 American hip hop duo, Kid ‘n Play first rose to fame in the late 80’s with the release of their debut studio album, 2 Hype (1988). The pair- Christopher Martin “Play” and Christopher Reid “Kid” first met as students of two rival high school groups. Eventually coming together for their mutual love for music, they decided to form a music duo called The Fresh Force in their teen years, with DJ Wiz. In 1986, the two aspiring artists released two tracks, Rock Me and Skeezer– their first official recordings together. By the following year, they had changed their name to what it is today, Kid ‘n Play. Recruiting the help of Play’s former bandmate, Hurby Azor, who became the pair’s manager, they eventually forged a contract with Select Records in 1987. After spending a year of recording at the studio, Kid ‘n Play released their first full length album entitled, 2 Hype in the fall of 1988. A successful debut for the new musicians, the disc has since gone Gold in the United States, after having sold over 500,000 copies.

Two years after their initial endeavor, the duo came out with their second studio album, Funhouse (1990), also under the Select label. An even bigger hit than their debut, it eventually managed to reach number fifty eight on the US Billboard Top 200. Soon afterward, Kid ‘n Play released their third and final album, Face the Nation with Elektra Records in 1991. Known for their pop-friendly instrumentals and positive lyrics, some of their most popular singles include Rollin’ with Kid n’ Play, Funhouse, and Ain’t Gonna Hurt Nobody– the last two having been number one rap hits. Aside from their friendly personalities, which inevitably captured the hearts of many, they were also known for their trademark dance move, the Kick Step- which was first seen in their music video, Gittin Funky.

In addition to their contributions to hip hop, the two artists have also embarked on an acting career. In 1990, they both made their small screen debut in the romance comedy film, House Party. Later that same year, they appeared as themselves in the TV series, Kid ‘n Play (1990). Continuing to star alongside one another over the next few years, the pair played a number of roles in House Party 2 (1991), Class Act (1992), Bodyguards (1993), and House Party 3 (1994). From that point onward, their acting careers began to diverge; while Kid continued to star in various films and TV series, Play started to focus less on his work as an actor. To put things into perspective, Kid has over two dozen credits to his name on his filmography while Play has nine.

So what has the hip hop duo from the 90’s been up to recently? Will they be releasing any new music anytime in the near future? What new projects have the two of them been busy with lately? What happened to Kid ‘n Play? Where are they now in 2018?

The Stars Behind Kid ‘n Play 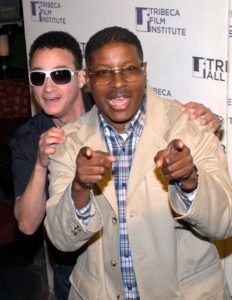 Christopher Reid- AKA “PKid” was born to an Irish mother and a Jamaican father on April 5, 1964 in New York City, New York. Raised in the city of Bronx, he went to the Bronx High School of Science, where he later graduated from in 1982. Following his graduation, he resumed his education at Miles College, prior to later transferring to Lehman College. While still in his teens, he met his future duo partner, Christopher Martin while performing in a couple of rival high school groups called The Super Lovers and The Turnout Brothers. Eventually coming together for their love of hip hop, they decided to form a music duo called The Fresh Force Crew in the mid 80’s.

Christopher Martin- AKA “Play” was born on July 10, 1962, in Queens, New York. Having been interested in rapping ever since his youth, he was a member of a hip hop group called Quicksilver and the Super Lovers during his teen years; his current stage name “Play” actually comes from his original emcee name, “Playboy”, which he adopted around that time. Not long afterward, he met Kid (who was known as Kid Coolout at the time), who was a member of The Turnout Brothers. Deciding that it may be a good idea to work together, they eventually forged a hip hop duo, which they named The Fresh Force Crew. Later on, the pair shortened their respective nicknames, and used them in their new stage name, Kid n’ Play.

Recruiting the help of Hurby Azor, Play’s former bandmate who later became the duo’s manager, they signed a recording contract with Select Records in 1987; Kid and Play were twenty three and twenty five at the time respectively. 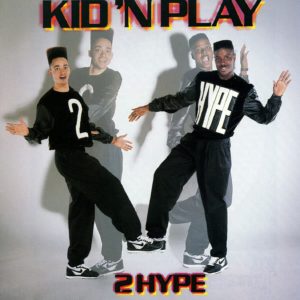 On October 25, 1988, Kid ‘n Play came out with their debut studio album entitled, 2 Hype. Recorded over a period of a year, its production was handled by The Invincibles and Hurby Luv Bug- the latter of whom also worked as the duo’s manager. Distributed by Jeffrey Collin’s Landmark Distributors, it came with forty-three minutes worth of hip hop; some of the numbers included in the track list include Rolling’ with Kid ‘n Play, Brother Man GEt Hip, Damn That DJ (The Wizard M.E.), Can You Dig That, and Do the Kid ‘n Play Kick Step.

A successful initial endeavor, the album peaked within the top 100 at number ninety six on the US Billboard Top 200; it also reached number nine on the US Top R&B and Hip Hop Albums Chart shortly afterward. Noted for its refreshing charm, the album’s dance-worthy production received a number of praises by critics such as Steve Huey writing for Allmusic. Kid ‘n Play’s winning personalities undoubtedly also played a large role in capturing the hearts of fans. As of April 1989, a little over a year after its original release, 2 Hype has been certified Gold by the RIAA after selling over 500,000 copies within the United States. The album later went on to spawn a handful of singles including Rollin’ with Kid ‘n Play, Gittin’ Funky, and 2 Hype, which peaked at number two, number twenty four and number nineteen respectively on the Hot Rap Singles Chart.

Two years later in the spring of 1990, the hip hop duo released their second full length album, Funhouse. Once again distributed via Select Records, it remains to be their most successful album to date. Produced by The Invincibles and Hurby Luv Bug, much like their earlier effort, it boasted eleven tracks including Back to Basics, Y U Jellin’ Me, Show ‘Em How It’s Done, Do Watcha Want 2, Can’t Get Enuff; the album also featured fellow artist Salt ‘N’ Pepa in the song, I Don’t Know. Comparable to 2 Hype, the lyrics mainly revolved around the themes of rap, dancing and partnership.

Upon its release, Funhouse peaked at number fifty eight on the Billboard 200- the highest that the pair has ever achieved on the chart. The album subsequently also reached number eleven on the Top R&B and Hip Hop Albums Chart. Named after their hit film, House Party, the album’s production was the target of much praise, having been described as being “funkier and fuller” compared to that of its predecessor. All in all a worthy successor, Funhouse was met with mostly favourable reviews from contemporary music critics. Two years after its release date, the album was certified Gold by the RIAA- making it the duo’s second disc to achieve over 500,000 copies in sales. 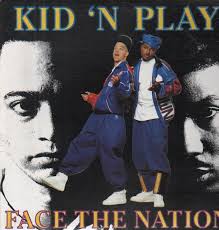 The following year, Kid ‘n Play released their third and final full length album, Face the Nation with Select Records. Recorded in 1991, its production was handled by a number of talented individuals including Pete Rock, Eric Johnson, Hurby Azor, and Christopher Martin aka Play himself. Similar in length compared to their earlier works, the album came with an eleven-song track list, some of the titles include Ain’t Gonna Hurt Nobody, Toe to Toe (Fat R&B Mix), Bills At the Door, Back on Wax, Got a Good Thing Going On, and Give It Here.

Named after a CBS program that ran during that period, Face the Nation was unfortunately, a critical failure- especially when compared to the success that was achieved by their earlier albums. On the Billboard Top 200, it only managed to reach number 144. The single, Ain’t Gonna Hurt Nobody, ended up peaking at number one on the Hot Rap Singles Chart; it remains to be one of Kid ‘n Play’s most popular hits to this date. Since then, the duo have not released any new music. 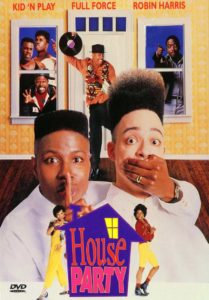 Around the time of their second album release, the hip hop duo starred in the comedy flick, House Party (1990); it also served as their motion picture debut. Directed by Reginald Hudlin, its revolved around Young Kid who after being grounded by his father, sneaks out to a friend’s party at night; unbeknownst to him, a group of thugs from school decides to give him a lesson. In the film, both Kid and Play played as themselves respectively; other actors of the cast list include Martin Lawrence, Robin Harris, Tisha Campbell, and A.J. Johnson.

Originally released in theaters on March 9, 1990, House Party proved to be a huge blockbuster, having grossed over $26 million against a budget of just $2.5 million. Universally acclaimed, it received praises from a number of movie critics including Roger Ebert of the Chicago Sun Times; the movie currently has a rating of 96% on Rotten Tomatoes. Following its success, two sequels were eventually released- House Party 2 (1991), and House Party 3 (1994).

Just a few weeks ago, it was announced that the duo will be headlining the fifth annual Hip Hop Family Day in Columbia. According to the official website, the free concert event is scheduled to take place on April 8, 2017.

Speaking of performances, Kid ‘n Play will also be headlining the Wisconsin State Fair, an annual event located in the heart of Milqukee County on August 9, 2017. As part of the 90’s Tour, the pair will also be joined by fellow artists Tone Loc, All-4-One, and Vanilla Ice.

If you’d like to stay connected with the hip hop duo, you can do so by following them on Twitter at @itskidnplay. Alternatively, you can also follow them separately on social media- you can find Play on Instagram at @itzbrandnew and Kid on Twitter at @kidfromkidnplay . While you’re at it, be sure to also check out their respective Facebook pages for some of the latest news!