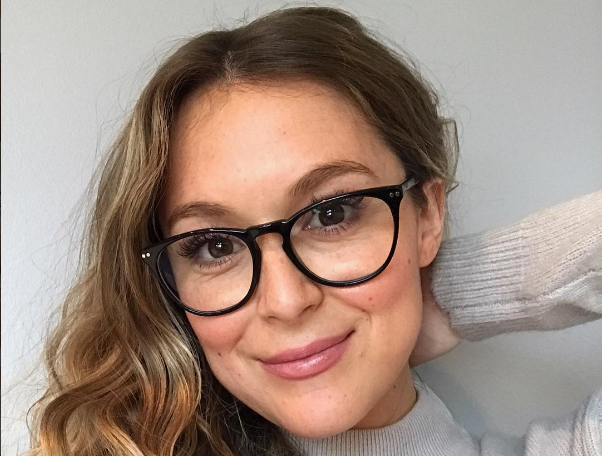 American actress Alexa Vega is best known for playing Carmen Cortex in the series of comedy films, Spy Kids. Born and raised in Florida, she entered the show business at the tender age of five, as her mother worked in a talent agency. After a successful audition, she landed her first television gig in Burt Reynolds’ comedy series, Evening Shade (1993), where she played alongside actors Charles Durning, Marilu Henner, and Burt Reynolds himself. Continuing to appear on the screen as a young actress, Vega later made her motion picture debut in the sports film, Little Giants (1994) the following year. From there, she eventually made a handful of guest appearances in ER (1995), Nine Months (1995), Chicago Hope (1995), A Promise to Carolyn (1996). In 1997, the then nine year old received a big break after being cast as one of the series regular in the ABC sitcom, Life’s Work. Shortly afterward, she landed another main role in the CBS series, To Have & to Hold (1998), although it was later cancelled due to low ratings.

The following fall, Vega was met with another opportunity after landing a supporting role in the CBS sitcom, Ladies Man (1998). Having said that, it wasn’t until 2001, that she rose to fame in the spy comedy film, Spy Kids. Starring alongside Antonio Banderas, Alan Cumming, Carla Gugino, and Teri Hatcher, the movie garnered her much widespread attention, as well as a Young Artist Award in 2002. One of her best remembered roles to date, she later reprised the character of Carmen Cortex in the subsequent sequels, Spy Kids 2: The Island of Lost Dreams (2002), and Spy Kids 3-D: Game Over (2003). Over the next few years, Vega continued to appear in a number of films including Remember the Daze (2007), Repo! The Genetic Opera (2008), Innocent (2009), Broken Hill (2009), and Mother’s Day (2010), to name a few.

So what has the former child star been up to since then? What has she been busy with now that she’s in her late 20’s? Has she been cast for any new roles lately? Can we expect to see her in any new TV shows or films this year? What happened to Alexa Vega? Where is she now in 2018? 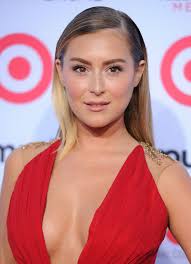 Born on August 27, 1988 in Miami, Florida, Alexa Vega (Birth Name: Alexa Ellesse Vega) is the daughter of a Columbia father and an American mother, the latter of whom is a former model. A member of a big family, she has six siblings, including her sister Makenzie Vega, who also works as an actress. After spending the first few years of her life in a Florida ranch, her family relocated to California when she was four years old. Following the move, her mother landed a job at a local talent agency, which would eventually lead Vega to her first television gig. At the age of five, her mother brought her in for an audition for the comedy series, Evening Shade (1993). After a successful try out, the blonde would make her official acting debut on national TV.

After appearing in the comedy for six episodes, the young actress made her big screen debut in the sports film, Little Giants (1994), where she had the chance to act alongside Shawna Waldron, Rick Moranis, and Ed O’Neil. Continuing to appear on television over the next few years, the grade schooler eventually made a handful of guest appearances in the series, ER (1995), Chicago Hope (1995), It Was Him or Us (1995), A Promise to Carolyn (1996), and Ghosts of Mississippi (1996). Soon after, she received a small break after being cast as one of the lead roles in the American sitcom, Life’s Work (1996). From there, she was later cast as yet another series regular in the CBS series, To have & to Hold (1998), although it was ultimately cancelled after a few episodes.

A couple of scattered roles later, Vega was met with another opportunity on TV after being cast as one of the principal characters in the CBS sitcom, Ladies Man (1999). More successful than her previous project, it ultimately ran for thirty episodes prior to its end in 2001. Playing the role of Wendy Stiles, the young actress’ performance in the show garnered her some of her first industry awards including a Young Artist Award nomination and a Young Star Award nomination. 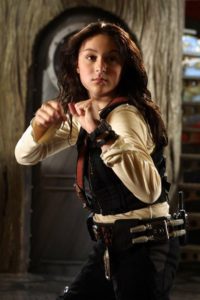 At the age of thirteen, Vega received the biggest breakthrough of her career after being cast as one of the starring characters in the spy comedy film, Spy Kids (2001). Directed and co-produced by Robert Rodriguez, it entered around two young teens named Juni and Carmen, who must save their secret-agent parents from danger after they are kidnapped. Portraying the main female lead, Vega portrayed the role of Carmen Cortex, while Daryl Sabara played as her on-screen sibling. Twelve years old at the start of the film, her character had zero idea that her parents were secret spies; a protective big sister to her little brother, the two later work together to bring their parents to safety. In addition to the two young actors, Spy Kids also starred Antonio Banderas, Carla Gugino, Alan Cumming, and Teri Hatcher.

Produced on a budget of $35 million, Spy Kids was released nation wide on March 30, 2001. A huge success at the box office, especially among younger viewers, it earned over $26 million during its initial weekend across 3100 screens, putting it in first place. At the end of its screening, the spy movie had grossed a total of $147 million worldwide in ticket sales- rendering it a financial hit. Perhaps Vega’s most well remembered role on the big screen to date, it earned her much recognition as a young actress at the start of the 200’s. Award-wise, it also netted her a Young Artist Award for “Best Supporting Young Actress”.

Considering the popularity of the movie, it wasn’t surprising when it was announced that a sequel, Spy Kids 2: The Island of Lost Dreams would be released the following year. Featuring most of the original cast, it once again entered around the two siblings after they set off to a mysterious island, where they eventually meet a group of rival kids. Aside from the original cast, the second instalment also saw actors Holland Taylor, Cheech Mari, Danny Trejo, and Taylor Momsen, among others.

Released in the United States on August 7, 2002, Spy Kids 2: The Island of Lost Dreams grossed approximately $16.7 million during its first weekend across 3300 venues, which put it in third place behind Signs and XXX. By the end of its theatrical run, it had taken in over $85 million in the US and Canada, and over $33 million internationally for a worldwide gross of $119 million. Although it didn’t rival the success of its predecessor per se, reviews for the film were will overwhelmingly positive. Having put on another stunning performance, Vega received a Young Artist Award for “Leading Young Actress” for her role as Carmen. 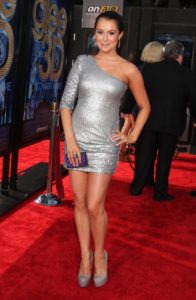 A year later, Vega reprised her role as Carmen for the third time in Spy Kids 3-D: Game Over (2003). Once again directed by Robert Rodriguez, the film’s plot centred around Carmen after she is trapped in a virtual reality game developed by a new enemy known as Toymaker; it is therefore up to her younger brother Juni, to save the day. Like the previous movies, it welcomed most of the original cast including Antonio Banderas, Carla Gugino, Daryl Sabara, Holland Taylor, and Ricardo Montalban.

Opened across 3300 theatres on July 25, 2003, Spy Kids 3-D: Game Over earned over $33 million during the opening weekend, making it an even greater success than its predecessor. By the end of its seven-month run, it had earned more than $197 million domestically. Despite being a commercial hit however, reviews from critics were generally mixed; in particular, its 3D-ness was the target of much criticism. Nonetheless, it remains to be the highest-grossing film of the franchise.

Although the third film was originally intended to be the last of the franchise, a fourth and final instalment, Spy Kids: All the Time in the World in 4D was released in the summer of 2011. Unlike the earlier films, which saw Vega as one of the main protagonists, it revolved around a new character, OSS Agent Marissa Wilson and her mission to capture a criminal known as Tick Tock. While the movie saw the return of Vega as Carmen, she was more of a supporting character, alongside Daryl Sabara.

Released on August 19, 2011, Spy Kids: All the Time in the World in 4D was considerably less successful than its earlier sequels. At the box office, it only grossed $85.6 million worldwide- less than half of the amount earned by the previous film.

Alexa Vega in Other Movies and TV Shows

In addition to her movie appearances, the actress has also played various characters on television including Hillary Cole from The Tomorrow People (2014), Dylan Savini from the TV film, The Tuners (2014), and Kiley Brenner in Nashville (2014).

More recently in 2015, she was a contestant on the twenty first season of ABC’s dancing competition, Dancing with the Stars. Paired with professional dancer Mark Ballas, Vega was ultimately eliminated during the seventh week. 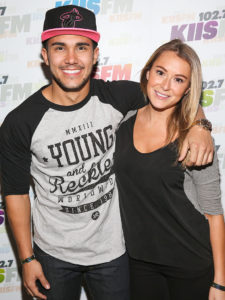 According to IMDb, the Florida-born actress will be starring in the upcoming comedy drama film, Sleep Away (2017). Directed by Tyler Graham Pavey, the cast list also includes actors Tom Lenk, Naomi Grossman, Jim O’Heir, John Ainsworth, and Shawn Ryan- even her husband, Carlos PenaVega makes an appearance in the movie! Although still in the post-production stages, it will presumable come out sometime this year in 2017.

In other news, the pair recently welcomed their son, Ocean King PenaVega into the world on December 7, 2016 (her pregnancy was followed in the reality show, Vex: Pregnancy VBlog). A first-time mother, Vega has understandably been spending more time with her family at home.

If you’d like to stay up to date with the 28-year-old actress, you can do so by following her on social media- you can find Alexa PenaVega on Twitter at @alexavega or on Instagram at @vegaalexa. Be sure to also check out her official Facebook page at @RealAlexaPenaVega.