What Happened to Jordan Smith – Life in 2018 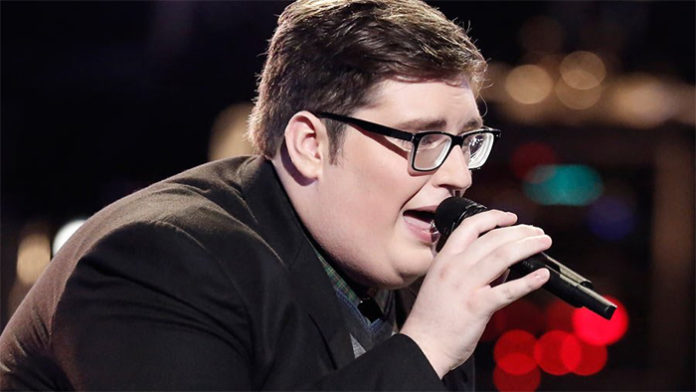 American singer Jordan Smith captured the attention of the country after winning the ninth season of the NBC singing competition, The Voice. Born and raised in Kentucky, he grew up surrounded by music. While still in grade school in the early 2000’s, he joined the local church choir during which he ultimately developed his voice. His vocal talents hard to miss, it soon caught the attention of his music teacher, who later encouraged him to pursue one-on-one training in order to further hone his skills. After graduating from high school, he relocated to Tennessee where he went to Lee University. Never having dropped his passion to sing, he joined the college choir with whom he performed with during his university years. A few years worth of studies later, Smith graduated with a Bachelor’s of Art in Music Business. From there, it wasn’t long until he decided to try his luck in the popular reality competition series, The Voice in 2015.

Although he was rejected from the show during his first try, he eventually attended the auditions again in the fall of 2015- which proved to be much more successful. Determined to impress the judges, Smith performed a heartfelt rendition of Sia’s Chandlier which ultimately led all four coaches (e.g. Adam Levine, Gwen Stefani, Pharrell Williams, Blake Shelton) to turn their chairs toward him; the aspiring singer subsequently chose to be on Levine’s team. Despite an initial lack of self confidence, he soon captured the hearts of everyone in the audience with his powerful vocals. By the latter half of the competition, it was apparent that he had become a crowd favourite. A series of on stage performances later, Smith was revealed to have finished in first place- making him the grand champion of season nine in December of 2015.

Not only was he crowned as the winner of the entire competition, but Smith was also awarded a $100,00 cash prize as well as a recording contract with Republic Records. The highest-selling artist to have ever compete on The Voice, he later released his debut single entitled, Stand in the Light in February of 2016, just a couple of months after his win. Not long afterward, he came out with his debut studio album entitled, Something Beautiful, which garnered him high praises from multiple music critics. Following up with a second release, Smith dropped his second full length album, ’Tis the Season in October of 2016. Although not as commercially successful as his first, it still managed to chart respectively on several music charts.

What has the twenty three year old Kentucky-born singer been up to since then? What projects or endeavours have been keeping him busy as of late? Will he be releasing any new singles or albums this upcoming year? Is he still recording music? What happened to Jordan Smith from The Voice? Where is he now in 2018? 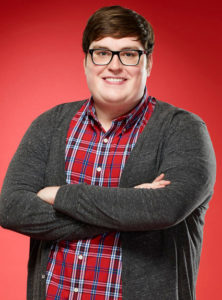 Born on November 4, 1993, Jordan Smith (Full Name: Jordan Mackenzie Smith) is the son of Geri and Kelly Smith. Raised in a musical household as his parents were both musicians, he joined the church chorus as a young boy, in his hometown of Wallkins Creek, Kentucky. Always singing at home, either by himself or with his family, he soon found himself falling in love with the works of Sara Bareilles, Shirley Caesar, and Whitney Houston. Continuing to sing into his teens, his vocal talents were eventually noticed by his music teacher at school, who subsequently encouraged him to pursue one-on-one lessons to further hone his skills. Over the next few years, he would continue to develop both his own style and sound.

After graduating from Harlan County High School in 2011, he moved to Tennessee where he enrolled at Lee University. Never having dropped his passion for singing, he joined the college choir during his years as a student at the institution; Smith eventually obtained a Bachelor’s in Music Business. As an aspiring singer, he had always been a fan of the NBC singing competition series, The Voice. Therefore when he learnt that the auditions for season eight were to be held nearby his school, Smith jumped at the opportunity. Determined to try out his luck, he drove all night to Nashville where the event was held. Although he received an initial call back, he did not receive any news following his private audition.

Disappointed, Smith continued with his studies. As fate would have it however, he was eventually contacted by a talent scout in 2015 about participating in the show’s tenth season. Ecstatic at the second chance, he performed a rendition of Sia’s his single, Chandelier which earned the approval of all four coaches. Lauded by Levine as being “the most important person that’s ever been on the show”, Smith subsequently chose to be on Team Levine.

Jordan Smith on The Voice 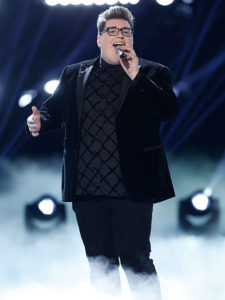 Despite having earned a spot in the competition, Smith was initially doubtful at his own abilities. In a later interview, the singer revealed that it had in fact, taken him a long time to convince himself of his own talent as an artist. For the first stage- aka the Battle Rounds, the Kentucky-native was paired up with fellow contestant Regina Love; after singing Like I Can by Sam Smith, it was Smith who was ultimately saved by Coach Levine.

Successfully advancing to the next round, Smith performed Adele’s Set Fire to the Rain during the Knockout Rounds, after being grouped with Viktor Kiraly. Having once again impressed Coach Levine with his singing, he was selected to remain on the competition while Kiraly was sent home; the episode was telecasted on October 12, 2015.

Although he had made it into the Top 24, his self-confidence at the time was still quivering. It wasn’t until his grand performance during the Live Playoffs, which aired on November 9, 2015, that he first started to see himself as a performer. For his performance that week, Smith sang Halo by Beyonce; met with immense applause, it also became his first song to reach the top ten on the iTunes Chart. With that, he became the first contestant in season nine to attain a number one hit.

Moving on to the Live Top 12, Smith found himself competing against the eleven remaining singers which included Amy Vachal, Jeffery Austin, Barrett Baber, Madi Davis, and Emily Ann Roberts, among others. Performing during part two of the live rounds, he sang the Christian hyme, Great is Thy Faithfulness- initially a cappella, although he later accompanied himself on the piano. His second competition single to reach the top ten on the iTunes Music Chart, it also made him the first competitor of the season to reach number one in terms of sales. Not only that, but it also charted on various US Billboard Charts including the Christian Songs and Hot 100 Charts. 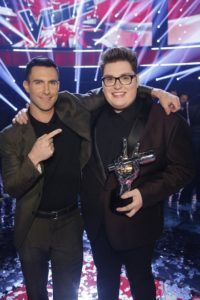 The following week, Smith sang Jessie J’s Who You Are  during the Live Top 11. Another applause-worthy performance for the singer, it earned him enough votes from the public to advance to the Top 10; not to mention the fact that it was his third consecutive top ten hit on the iTunes Music Chart. Continuing into the Live Top 10, he performed Leonard Cohen’s 1984 title, Hallelujah which led him to once again, be saved by public vote. By the end of the episode, only nine contestants were left in the competition.

During the Semifinals which were broadcasted on December 7, 2015, Smith sang Queen’s Somebody to Love. Met with critical praise, including an incredibly positive comment from Coach Levine, it quickly became the best-selling song in the iTunes Store following the episode. With that, it was certain that he would be competing in the long awaited finals. One of the finalists, Smith sang three songs during the finals- Climb Ev’ry Mountain from The Sound of Music, Mary, Did You Know? and God Only Knows, the last of which was performed with Adam Levine.  By the end of everyone’s on stage performance, he was crowned as the winner of the ninth season, earning himself a recording contract with Republic Records and a cash prize of $100,000.

Jordan Smith After The Voice 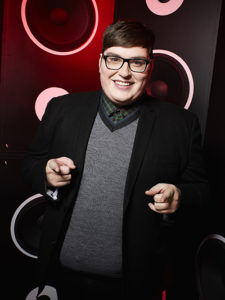 The following spring, Smith released his debut studio album, Something Beautiful through Republic Records. Considered an adult contemporary/Christian album, it was produced with the help of Bill Appleberry, Stephan Moccio and David Foster. Originally announced in February of 2016, its track list was first revealed with the release of its single, Stand in the Light. Consisting of both original material and cover songs, the album included the titles And So It Goes, Angel, I Got to Be Me, What Now, Ain’t Got Far to Go, Beautiful Things, and You Are So Beautiful; a couple of bonus titles, Dog Days Are Over and Love Somebody were also made available via a Walmart exclusive version.

Upon its release, Something Beautiful entered the US Billboard Top 200 at number two. A considerable success, the album soon became the highest entry ever to have been achieved by a The Voice contestant. Lauded for his confident singing and good cheer throughout, Smith’s debut album earned him many positive reviews from contemporary critics. Outside of the United States, Something Beautiful also peaked at number nineteen on the Canadian Albums Chart. As of August 2016, it has sold more than 73,000 copies in the US, making it Smith’s best-selling album to date.

The album as mentioned above, was preceded by the hit single, Stand in the Light. Released via digital download on February 12, 2016, it enjoyed moderate success, having found its way to number twenty five on the Adult Contemporary Chart and number eleven on the Billboard Christian Songs Chart.

Later that same year, Smith came out with his second studio album, ’Tis the Season, also under Republic records. Released on October 2016, it peaked at number eleven on the US Billboard 200 and at number three on the Holiday albums Chart. In Canada, the holiday album also charted at number thirty four. To date, it has sod over 20,000 units domestically.

Considering Smith’s jam-packed touring schedule, it’s understandable that he hasn’t had time to lay out any new releases. According to his official website, he will be performing across the country throughout March and early April- from Verona New York to Morristown, New Jersey. If you’d like to watch The Voice winner perform up on stage, be sure to grab some tickets while they’re still available! For more information about the tour dates, please visit his official website at jordansmithofficial.com.

In other news, the singer recently tied the knot with long-time girlfriend, Kristen Denny last summer, so it goes without saying that he’s probably enjoying the married life. We wish him all the best!

If you’d like to keep connected to the 23-year-old singer, you can do so by following him on social media- you can find Jordan Smith on Twitter or Instagram at @jordansmithlive. While you’re at it, be sure to also drop by his official Facebook page!