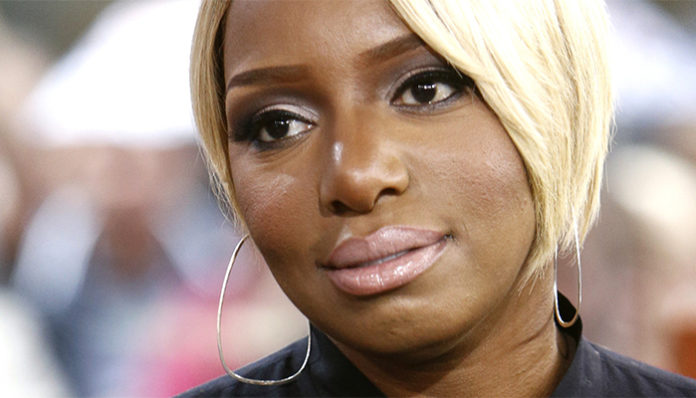 Television personality NeNe Leakes rose to prominence after being cast in the Bravo reality series, The Real Housewives of Atlanta (2008). Although she had appeared in various projects prior to that, such as the musical film, The Fighting Temptations (2003), it wasn’t until the late 2000’s that she started to garner the attention of the public. While in her mid 40’s, the Georgia-native received a career breakthrough after landing a role as one of the main cast members on The Real Housewives of Atlanta (2008). Making herself known to the world through the reality show, the series earned the dark skinned beauty much widespread attention during its eight year run. To date, it remains to be one of her most well remembered roles on the small screen. After starring on the show for several years, Leakes was given her own reality series, I Dream of NeNe: The Wedding (which she also executively produced) in the fall10 of 2013, which continued for seven episodes.

Eventually transitioning to scripted television, Leakes made her official acting debut in the NBC sitcom, The New Normal in 2012. Portraying the role as a sassy secretary, she ended up appearing in all twenty two episodes of the comedy- which further boosted her fame. Around that same time, she also landed a supporting role in the award-winning teen drama, Glee (2012), where she was cast as a swimming coach. Aside from The Real Housewives of Atlanta (2008), her role in the musical comedy drama is perhaps the second best remembered portrayal of her career. As of 2017, she has not taken on any other roles as an actress. Having said that, she did go on to establish her own television production company, NeNe Leakes Entertainment as it is called- which would go on to produce two of her additional spin-off reality series.

More of a TV personality than an actress, Leakes has been featured in countless TV shows- not including the ones associated with The Real Housewives of Atlanta. For instance, she has participated in a number of competition series such as Dancing with the Stars (2014), The Apprentice (2011), Lip sync Battle (2016), and Celebrity Family Feud (2016), and Cupcake Wars (2016), to name a few. Additionally, her status as a reality star has also led her to appear in sundry talk shows including Jimmy Kimmel Live! (2009), Ellen: The Ellen Degeneres Show (2009), The Arsenio Hall Show (2014), Good Morning America (2014), and The Meredith Vieira Show (2015), among others. Altogether throughout her 10 year+ career, she has made over seventy appearances on television.

So what has the dark skinned beauty been up to since then? What new television programmings have she been gracing her presence with? Can we expect to see her in any TV dramas or reality competitions this year? What does she have in store for fans? What happened to NeNe Leakes? Where is she now in 2018? 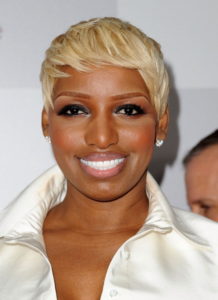 Born on December 13, 1966 in Queens, New York, NeNe Leakes (Birth Name: Linnethia Monique Johnson) was raised by an aunt in Athens, Georgia. One of five siblings, her mother allegedly did not have enough resources to care for all of the children. A relatively sensitive topic for Leakes, her mother’s abandonment has caused her much anguish growing up, as evident by a tearful statement given by the star herself on an episode of The Real Housewives of Atlanta. To make matters even more complicated, it was later revealed in a subsequent segment that she and her biological father are no longer on speaking terms as the latter showed disapproval about her appearing on the reality series- although it took her a long time to reunite with him in the first place. In terms of her siblings, one of her brothers have also since passed- an event which she took relatively hard.

Prior to landing her breakthrough role in the Bravo reality series, Leakes appeared as a cameo in a handful of TV shows such as The Parkers (1998). In 2003, she was even cast as a minor character in the musical drama film, The Fighting Temptations where she had the opportunity to act alongside Beyonce, and Cuba Gooding, Jr., Unfortunately however, none of her scenes ending up making it to the final movie; consequently, it did not add to her list of credits on her filmography.

Nene Leakes’ Big Break on The Real Housewives of Atlanta 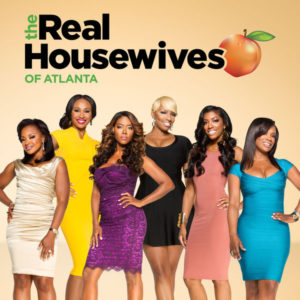 The third instalment of The Real Housewives franchise, The Real Housewives of Atlanta premiered on the Bravo Network on October 7, 2008. Much like its predecessors, it focused on both the professional and personal lives of a group of women who, as the title implies, lives in the city of Atlanta, Georgia. More specifically, the reality series starred NeNe Leakes, Kim Zolciak-Biermann, Lisa Wu,Sheree Whitfield and DeShawn Snow. As the show continued throughout its seasons, additional cast members such as Phaedra Parks, Kandi Burruss, Cynthia Bailey and Kenya Moore were introduced. One of the show’s original stars, Leakes was ultimately featured in seven seasons (she was a guest star in the eighth)- making her the most prominent housewife of the entire show.

Throughout the seasons, a number of plot lines were followed including the conflict that arose after Leakes was excluded from a divorce party (which was shown in the series premiere) and the subsequent relationships that she has with her friends. Altogether, the reality star appeared in 128 of its 181 episodes. Critical reception wise, critics generally gave the show favourable reviews- many of whom praised it for following the African-American community. Still, it receives a fair share of less positive reviews from sources such as The New York Times, and the Seattle Post Intelligencer. Regardless, The Real Housewives of Atlanta successfully become a “guilty pleasure” for many viewers, whom stayed glued to the screen during its air. The most popular series of The Real Housewives Franchise, it has managed to maintain a steady viewership of 1.5 million.

After seven years on the show, it was announced by the network that Leakes would be departing from the show alongside Claudia Jordan. At that point, the series became the first not to retain any of the remaining cast members.

NeNe Leakes in the Spin-off I Dream of NeNe: The Wedding

In the fall of 2013, Leakes was given her own reality series on Bravo, I Dream of NeNe: The Wedding. Produced by NeNe Leakes Entertainment, her own television production company, it acted as a bridge between season five and season six of The Real Housewives of Atlanta. Starring her and her former spouse, Gregg Lakes, the show chronicled the entire process of her wedding, from the initial preparations to the big day held at the InterContinental Buckhead Hotel. Amongst her nine bridesmaids were Marlo Hampton and Cynthia Bailey, both of whom were also featured in the series.

Executively produced by Leakes herself, I Dream of NeNe: The Wedding ran for seven episodes, prior to ending on October 27, 2013. 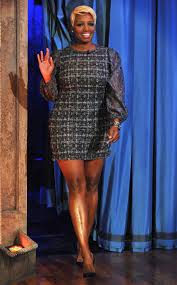 Eventually branching into television drama, Leakes made her official acting debut in the popular teen drama, Glee in the winter of 2012. Created Ian Brennan, Ryan Murphy, and Brad Falchuk, the series centred around the fictional glee club at William McKinley High School. Not only does the show revolve around the topic of music, but it also discusses various social issues such as relationships, race and sexuality. Introduced toward the end of the third season, Leakes portrayed the role of Roz Washington- a synchronized swim coach and former Olympic medalist; she is eventually recruited to coach the Cheerios, one of the school’s cheerleading teams, much to Sue Sylvester’s dismay.

Perhaps the actress’ best remembered portrayals on the small screen to date, her appearance in the show ultimately helped to further boost her popularity during the early 2010’s. Appearing on and off over a period of three years, her character was last seen in the third episode of season six, Jagged Little Tapestry. In a later interview with the show’s creator Ryan Murphy, it was revealed that Roz Washington was actually created with Leakes in mind. Despite being her first television drama, her acting garnered much praise from critics who praised her as a fabulous guest star. 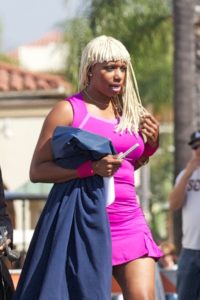 Around the same time as her debut on Glee, Leakes also landed a lead role in the new NBC sitcom, The New Normal. Created and written by Ali Adler and Ryan Murphy, the series followed the lives of an affluent gay couple, David Sawyer and Bryan Collins. Deciding to expand their family, they opt to go for a surrogate mother who later moves into their house with her nine year old daughter. While Justin bartha and Andrew Rannells played David and Bryan respectively, Leakes portrayed the role of Rocky Rhoades- Bryan’s production assistant who later works as a producer of the hit series, Sing.

One of the main cast members, the actress first appeared in the pilot episode; she would go on to appear in all twenty two episodes of the sitcom.

Originally debuted on NBC on September 10, 2012 (the pilot premiered in August), The New Normal garnered close to seven million viewers during its initial episode. Despite its rather strong cast however, viewership ratings ultimately dropped with the subsequent weeks. Critical reception-wise, the show also generally received mixed reviews; for instance it currently holds a score of 60/100 on Metacritic. Nonetheless, it earned a number of accolades including a People’s Choice Award for “Favourite New TV Comedy” and a GLAAD Media Award for “Outstanding Comedy Series” in 2013.

Since then, Leakes has returned back to reality TV, having made several guest appearances in The Amandas (2012), Betty White’s Off Their Rockers (2013), The Price Is Right (2013), and The Millionaire Matchmaker (2014). That year, she also took part in the eighteenth season of the dancing competition, Dancing with the Stars, where she was paired up with professional dancer Tony Dovolani.

More recently in 2016, Leakes has also been serving as one of the panelists in the game show, To Tell The Truth.

This past January, The Real Housewives of Atlanta star graced the stage of the culinary competition, Masterchef Celebrity Showdown (2017). Pairing up with her husband Gregg Leakes, the two went head to head against the Empire couple Grace Gealey and Trai Bryers. Shortly after the broadcast on TV, Leakes posted a photo of themselves on set, highlighting the fact that she wore heals while cooking in the caption.

Aside from that, Leakes has also appeared in a couple of TV talk shows including The Dr. Oz Show (2017), and The Real (2017), the last of which saw her as one of the guest co-hosts. So far, those seem to be the only appearances that she’s made on the small screen- having said that, we’re just a few months into the new year, so she will probably be involving herself in further projects later on.

If you’d like to stay in touch with the reality star, you can do so by following her on social media- you can find NeNe Leakes on Twitter or Instagram at @neneleakes. Don’t forget to also drop by her official Facebook page for the latest news!