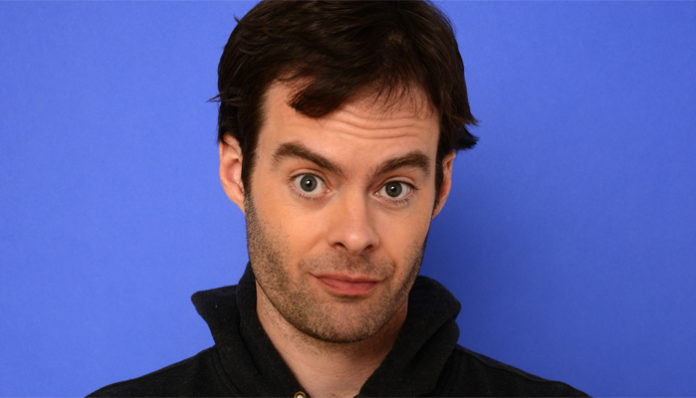 American comedian Bill Hader rose to fame in the mid 2000’s for his work in the sketch comedy series, Saturday Night Live. Born in Oklahoma, he watched many films growing up; he was especially fond of Woody Allen and Mel Brooks’ works. Wanting to get involved himself, he made a number of short movies with his friends during his late teenage years; in school, he also took part in a production of The Glass Menagerie. Deciding that he wanted to pursue a career in film directing, he later went to The Art Institute of Phoenix. During that time, he worked as a production assistant for various motion pictures such as Collateral Damage and The Scorpion King. After several years of working backstage, he was encouraged by his friends and peers to try his hand out at comedy in front of the camera. Instantly taking to improvisation, he soon joined the Second City LA Improv Troupe; from there, he eventually became a member of another comedy group called Animals of the Future.

Ultimately, it was while he was performing with the group that he caught the attention of actress Megan Mullally; impressed by his performance, she eventually put him in contact with Lorne Michaels, who was among those involved with the auditions for Saturday Night Live. Jumping at the opportunity, he traveled to New York and tried out for the part; shortly after his audition, he was offered a role in Saturday Night Live in 2005. Although he started off as a featured cast member, Hader quickly rose to become one of the most well recognized regulars of the series. Lauded for his spot-on impressions of Al Pacino, Tony Blair, Charlie Rose, and Harvey Fierstein, to name a few, his talents have since earned him three Primetime Emmy Award nominations (e.g. Outstanding Guest Actor in a Comedy Series, Outstanding Supporting Actor in a Comedy Series).

Since his rise to fame in the sketch comedy, Hader has also made several appearances on screen as an actor. In 2006, he appeared in a film for the first time in Anthony and Joe Russo’s romance comedy, You, Me and Dupree. Gradually cast for more roles, he later took part in Knocked Up (2007), Purple Violets (2007), Hot Rod (2007), and The Brothers Solomon (2007). Eventually branching out toward television, the comedian appeared as a recurring character in the series Shutterbugs (2008), and Human Giant (2008). On top of all that, he has also lent his voice to several characters in Cloudy with a Chance of Meatballs (2009), South Park (2011), Bob’s Burger (2012), Inside Out (2015), and Finding Dory (2016).

So what has the 38-year-old comedian been up to since then? What new projects have been keeping the Oklahoma-native busy these days? What’s his current focus on- comedy or acting? Can we expect to see him in any upcoming movies? What happened to Bill Hader? Where is he now in 2018?

Bill Hader’s Early Life and Dream of Becoming a Filmmaker 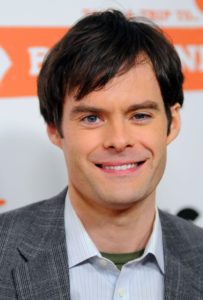 Born on June 7, 1978 in Tulsa, Oklahoma, Bill Hader (Birth Name: William Thomas Hader, Jr.) is the son of William Thomas Hader, a restaurant manager and Sherri Renee Patton, a dance instructor; the oldest out of three children, he has two younger sisters named Kara and Katie. Growing up, he had a keen interest in film- he often filled his time watching various movies as a young boy; he was especially fond of the works of Woody Allen and Mel Brooks- which he had been introduced to by his father. Even as a child, Hader knew that he wanted to pursue a career in the entertainment industry. Eventually trying his hand out at creating movies himself, he made a number of short films with a few close friends as a teen.

A student at Cascia Hall Preparatory School, he also involved himself in a series of school plays including that of The Glass Menagerie. Despite his aspiration to become a film director, his abysmal grades ultimately proved to be an obstacle; they were simply not good enough for him to go to his desired film schools. As an alternative, Hader went to The Art Institute of Pheonix where he studied briefly prior to transferring to Scottsdale Community College. Prior to graduating from college however, his dream of becoming a filmmaker once again made its way to the forefront of his mind; with that, he soon dropped out of university, to pursue opportunities in Los Angeles in 1999- he was twenty one at the time.

Shortly after settling down in the country’s entertainment capitol, Hader started to work as a production assistant- a position that he’d hope would lead to greater opportunities. Throughout the early 2000’s, he was involved with Collateral Damage (2002), Empire of Dreams: The Story of the Star Wars Trilogy (2004), and Spider-Man (2002), to name a few. After a negative experience while working on The Scorpion King, he decided to quit his job.

From there, he began working as an assistant editor at the Los Angeles-based digital marketing firm, Triage Entertainment. One day, Hader was invited by a friend to attend a performance by the comedy troupe, Second City. Immediately taken by their on stage performance, he soon found himself wanting to pursue improvisation. Following through with his plan, he eventually joined the Los Angeles Improv Troupe and later, a sketch comedy crew known as Animals of the Future.

During one fateful performance with the group, Hader captured the attention of Megan Mullally, an actress who happened to be in attendance. Impressed by his showcase of talents, she eventually put him in contact with Lorne Michaels, a well known television producer. After being told that there was an opportunity available with the popular sketch comedy, Saturday Night Live, Hader promptly traveled to New York to attend the auditions. A few convincing impressions later, he was welcomed into the cast as one of its featured members. 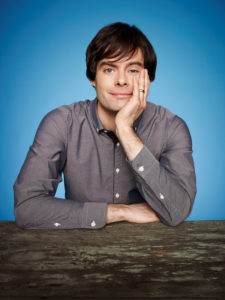 At the age of twenty seven, Hader made his big debut on the Emmy Award-winning sketch comedy, Saturday Night Live (2005). For his first appearance, which aired on October 1, 2005, he performed an act that saw him playing as a psychologist during an emergency landing on an aircraft. A talented comedian, he had no difficulty capturing the hearts of audiences with his humor. Before long, he was promoted from a featured player to one of the regular cast members. Throughout his time on the show, he has done a number of impressions including those of Rick Perry, Al Pacino, Harvey Fierstein, James Carville, and Eliot Spitzer, to name a few. Six years after he first step foot in front of the camera, he was nominated for a Primetime Emmy Award for “Outstanding Supporting Actor in a Comedy Series” in 2012.

Despite his success on the show however, Hader allegedly never felt “comfortable” for the first four years. After starring on Saturday Night Live for eight years, he made the decision to leave, as the constant commute to Los Angeles proved to be difficult with their children. Nevertheless, the sketch comedy remains to be one of his best recognized roles, as it was the one that propelled him into super stardom. Altogether, Hader had appeared in 160 episodes from 2005 until 2013. 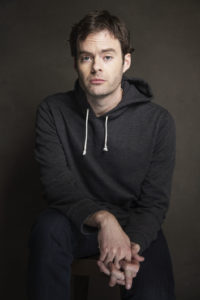 Eventually branching into film, Hader was cast in Greg Mottola’s teen comedy, Superbad in 2007. Written by Evan Goldberg and Seth Rogen, it centered around two high school seniors who are determined to lose their virginity prior to their graduation. While Michael Cera and Jonah played the roles of the teens, the comedian portrayed the part of Officer Slater- a police officer who is sent to investigate a robbery in a liquor store- which the two friends happened to have been involved with. Although it wasn’t his first time portraying a character on the big screen, it was the first high profile film that he took part in.

A huge success at the box office, it opened at number one- having taken in over $33 million during its opening weekend across 3000 venues. By the end of its theatrical run, it had earned well over $169.9 million worldwide, a huge amount compared to its production budget of $20 million. Praised by casual viewers and critics, Superbad ended up winning a number of accolades including an MTV Movie Award nomination for the category of “Best Movie”.

Hader’s next big break came in the form of a Pixar animated film- in 2015, he played the role of Fear in the Academy Award-winning, Inside Out. Directed by Pete Docter, the movie took place in the mind of a young teenage girl, where five personified emotions lead her through her life. Not an amateur when it comes to voice acting (Hader had taken part in various animated projects before), he was given the role of Fear- one of the film’s main characters. As a member of the cast, he was joined by Amy Poehler, Richard Kind, Phyllis Smith, Lewis Black and Mindy Kaling.

Released in theaters on June 19, 2015, the Walt Disney Studios film was met with critical acclaim upon hitting the screens. On the night of its premiere, it grossed over $3.7 million- a record-breaking amount, even for the renowned animation company. By the end of its opening weekend, it had earned over $90.4 million, which put it in second place in terms of gross, behind Jurassic World. A crippling success, it garnered nothing but glowing reviews from critics writing for high-profile publications; to date, it currently has a score of 98% on Rotten Tomatoes. One of the most successful movies of its year, it went on to win numerous accolades including a Golden Globe for “Best Animated Feature Film” during the 73rd annual ceremony. For his role in the movie, Hader also received a BTVA People’s Choice Voice Acting Award for “Best Vocal Ensemble in a Feature Film”, which he shared with the rest of his cast.

This spring, Hader will be lending his voice to Alpha 5 in the highly anticipated sci-fi action film, Power Rangers (2017). Directed by Dean Israelite, it will center around a group of high school teens, who after being infused with various super powers, find themselves having to use their powers to save the world. The cast also features Dacre Montgomery, Naomi Scott, RJ Cyler, Ludi Lin, and Becky G. The film will be released on March 24, 2017.

Additionally, he will also be directing and starring in a made for television film called Barry, which is currently in post-production. According to IMDb, it will follow the life of a former hit man who gets caught up in the Los Angeles theater scene. Aside from Hader, it will also be starring Stephen Root, Glenn Fleshler, and Henry Winkler.

It looks like Bill Hader isn’t on social media (as of yet)- if you’d like to keep updated with his latest projects, be sure to visit his official IMDb page. Having said that, we’ll let you know as soon as he’s on Twitter or Instagram!