What Happened to M.I.A. – What She’s Doing Now 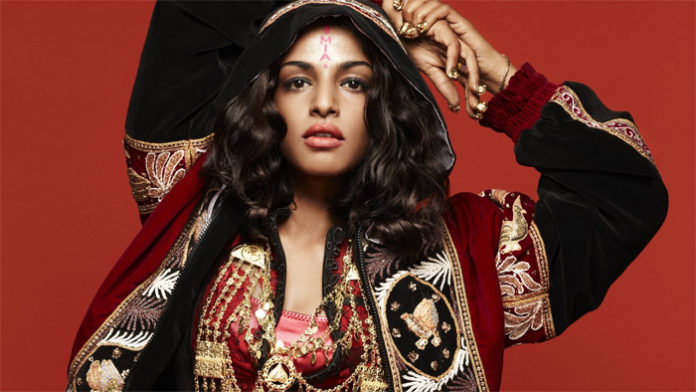 Mathangi Arulpragasam- better known as M.I.A. first received widespread attention for her hit singles, Galang and Sunshowers in 2004. Born in London, she studied fine art at the Central Saint Martins College of Art and Design, after which she started to work as a filmmaker and graphic artist. It wasn’t until 2000 that she turned her attention to music after shooting a documentary on a band called Elastica. At the time, the group’s lead vocalist lent M.I.A. a drum machine and sequencer, which she subsequently used to record a demo-tape. As it happened, one of the songs Galang ended up becoming a huge hit, having garnered her a huge following online. Before long, her recordings had caught the attention of several record labels; in mid 2004, M.I.A. signed with XL Recordings. After the release of Sunshowers later that year, she dropped her first full length album, Arular in the spring of 2005.

A modest success, her initial endeavor ultimately reached several record charts around the world. Two years later, M.I.A. followed up with her second studio album, Kala in the summer of 2007. Her best effort to date, it has since gone gold in the United States after exceeding 500,000 domestic sales. Since then, the rapper has come out with three additional albums entitled, Maya (2010), Matangi (2013), and AIM (2016); while they all successfully charted on the music charts, none ended up replicating the same level of success of Kala. In addition to her full length albums, M.I.A. has also released two extended plays, two mix tapes, and over thirty singles. In 2008, she dropped the hit single, Paper Planes which has since gone platinum three times in the United States; some of her other popular titles include XXXO, Born Free, Teqkilla, Bad Girls, Go Off, Borders, and Sword. Throughout the years, she has also collaborated with a number of artists such as Buraka Som Sistema, Rye Rye, Madonna, Nicki Minaj, and Baauer, to name a few.

Unquestionably talented, M.I.A. has earned several awards from close to fifty nominations throughout her career. To date, her collection of accolades includes two ASCAP Awards, an Asian Music Award, a BET Award, a Canadian Independent Music Award, and two MTV Video Music Awards. In 2008, her original song Slumdog Millionaire also received an Oscar Award nomination for Best Achievement in Music Written for Motion Pictures. Speaking of film, M.I.A. also made a brief appearance in the movie Khushiyaan back in 2011. One of the most popular artists in America, she has been featured in several TV shows such as House Band (2006), What Perez Sez (2007), Late Show with David Letterman (2007), House of Style (2012), and Conan (2013).

What has the accomplished 41-year-old artist been up to since then? What new projects have been occupying her time as of late? Will she be releasing any new music this year? What can we expect to see from her? What happened to M.I.A.? Where is she now in 2018? 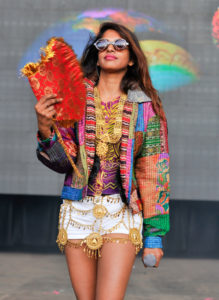 Born on July 18, 1975 in Hounslow, London, M.I.A. (Birth Name: Mathagi Arulpragasam) is the daughter of Kala and Arul Pragasam, both of whom are of Sri Lankan descent. When she was six months old, her family returned to Sri Lanka; due to her father’s involvement in various political activities however, they were always on the move. After relocating several times, the family returned and settled down in London in the mid 80’s. After graduating from high school, M.I.A. went to Central St Martins College where she studied fine arts and film. After graduating in the late 90’s, she started to work as a filmmaker and graphic artist.

Ultimately, it wasn’t until she was in her mid twenties that she ventured into the music realm. In 2011, she was filming a documentary on a music group called Elastica, when their head vocalist lent her his professional drum machine/sequencer. Taking a stab at it, M.I.A. used the equipment and eventually produced a demo tape- which contained a song entitled, Galang. After uploading the title online, the single, much to her surprise, quickly garnered her a sizable following. Before long, the song had attracted the attention of various music labels, all of whom were interested in signing the talented artist. In mid 2004, M.I.A. made the decision to sign with the England-based company, XL Recordings.

M.I.A.’s Music Releases Throughout the Years 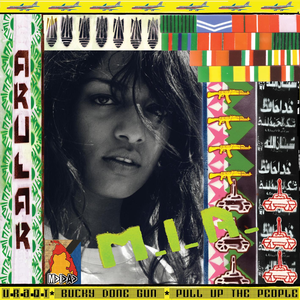 On March 22, 2005, M.I.A. released her debut album, Arula in the United States (it was made available a month later in her native UK). Preceded by a mix tape and a couple of singles, the alternative hip hop album came with twelve tracks including Freedom Skit, One for the Head Skit, Bucky Done Gun, Pull Up the People, and Amazon; additionally, there was also a hidden thirteenth track called M.I.A. While Arula was produced by Anthony Whiting, Cavemen, Paul Byrne, Richard X, and Switch, most if not all of the songs were written by the artist herself.

Praised for its integration of political themes into the lyrics, Arula charted at number 190 on the Billboard Top 200 and at number three on the Top Electronic Albums, and at number sixteen on the Top Independent Albums in the United States. Within two years, the album had sold over 129,000 copies in the US. In her native United Kingdom, it peaked at number ninety two. Considered to be a success for the new artist, it was nominated for a Mercury Prize shortly after its release. Since then, it has also been featured in several publications such as Rolling Stone and Clash Magazine.

Two years later on August 8, 2007, the hip hop artist dropped her second studio album, Kala, also through XL Recordings. Featuring various South Asian-oriented sounds including the use of the urumee, it included twelve tracks; some of them included Bamboo Banga, Mango Pickle Down River, 20 Dollar, The Turn, XR2, and Bird Flu. Probably most noteworthy of all, the album also gave rise to her most popular single to date, Paper Planes, which has since gone multi-platinum in the US.

Her best selling album, Kala entered the US Billboard Top 200 at number eighteen with approximately 29,000 sales within the first week; it later also reached number eight on the Top Rap Albums Chart and number one on the Top Electronic Albums Chart. M.I.A.’s first international hit, the album also charted in several other countries such as Germany, Japan, Sweden, Norway, Austria, Belgium Canada, and Finland. Met with widespread acclaim, Kala received many rave reviews from publications such as the Los Angeles Times, MSN Music, Spin Magazine and The Rolling Stone. Included in numerous best albums list (e.g. The AV Club, Entertainment Weekly, etc), it has since sold more than 559,000 copies in the United States according to Niel Soundscan. 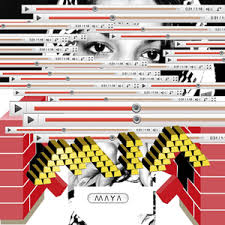 On July 7, 2010, M.I.A. released her third studio album entitled, Maya. Her first record under her own N.E.E.T. Recordings label, its production and songwriting were mostly handled by the singer herself, although Switch and Diplo- two of her long-time collaborators also worked on the album. Centering around the theme of information politics, Maya came with twelve tracks including The Message, Story to be Told, Meds and Feds, Tell Me Why, It Takes a Muscle, and Space; a few bonus songs were also included in the deluxe edition version that was later made available (e.g. Internet Connection, Caps Lock, Illygirl, Believer).

Within the first week, Maya sold over 7,1000 copies; it eventually debuted on the UK Albums Chart at number twenty one- making it M.I.A.’s highest charting album in the United Kingdom. In the United States, the album performed slightly better, having entered the Billboard Top 200 at number nine, where it also peaked. An international hit, it also charted in dozens of other countries such as Switzerland, Finland, France, Greece, Belgium, Australia, and Ireland. Since then, Maya has made several appearances in various magazine lists of best albums of the year.

On November 1, 2013, the hip hop artist released her fourth studio album, Matangi. Produced primarily by Switch and M.I.A., it was recorded in various studios in New York, Miami and Hollywood. Featuring an hour’s worth of music, most of which revolved around the themes of karma and reincarnation, it came with the tracks Double Bubble Trouble, Bring the Noize, Know It Ain’t Right, Matangi, Only 1 U, and Boom Skit, to name a few.

While reviews were still generally positive, its chart performance was significantly lower than that of her previous album. Upon its release, it debuted at number sixty four on the UK Albums Chart. In the US, Matangi entered the Billboard 200 at number twenty three, with approximately 15,000 in first week sales. According to statistics provided by Niel Soundscan, it has since sold 77,000 units as of August 2016. 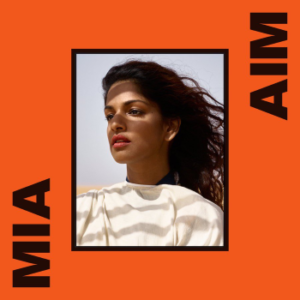 After a three-year long break, the rapper came out with her fifth album, AIM on September 9, 2016. Recorded between 2014 and 2016, it was announced by M.I.A. herself that it would be her final album. Recorded in several locations around the world, the album featured both Western and Eastern-inspired sounds; some of the titles from the twelve-song track list include Ali R U OK?, Fly Pirate, Foreign Friend, Jump In, Borders, and Go Off. Additionally, AIM also featured a couple of guest artists, Dexta Daps and Zayn.

Promoted online via various demo tracks, the album entered the UK Album Charts at number sixty three, where it speak one week. On the other hand, it debuted at number sixty six on the US Billboard Top 200; it eventually also reached number four on the Top Rap Albums Chart and number one on the Top Dance/Electronic Albums Chart. While it’s not M.I.A.’s best performing album, it did manage to hit the record charts of several other countries overseas such as New Zealand, Germany, France, Canada, Belgium, Australia and Austria. As of September 2016, it has also spawned five singles, Freedun, Go Off, Borders, Bird Song, and Swords.

Among those that were not mention include her mix tapes Piracy Funds Terrorism, Vicki Leekx and her EPs, Homeland Security Remixes, Galang EP, and How Many Votes Fix Mix.

As far as live performances go, M.I.A. has a few planned for these upcoming months- more specifically, she will be performing in London, Neuchatel, Marmande, and Winchester. Be sure to grab your tickets, if you don’t want to miss out on the opportunity.

On February 8, 2017, the artist also released a brand new single entitled, P.O.W.E.R. through Interscope Records. Written and produced by herself, its release was accompanied by a video that was also directed by M.I.A.

Another project that’s been occupying M.I.A. is her documentary. Although it’s been under works for several years (and a trailer has been released), the final product has still yet to be released. In a recent interview, she admittedly stated that “it might take another 10 years to finish”, much to the dismay of fans.

If you would like to stay connected with the British rapper, you can do so by following her on social media- you can find M.I.A. on Twitter at @miauniverse or on Instagram at @miamatangi. Be sure to also check out her official website for the latest news.