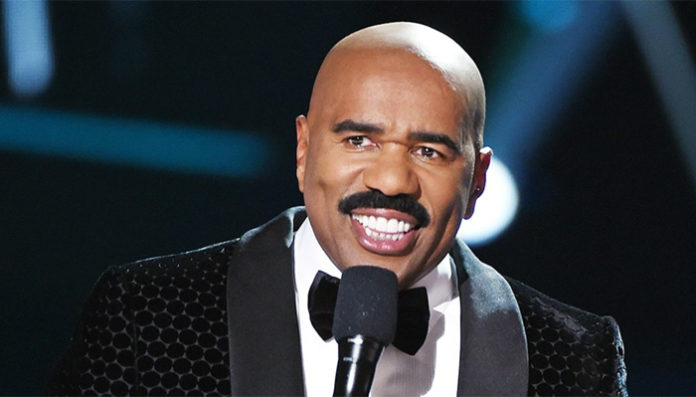 American comedian Steve Harvey is perhaps best known for his popular talk show, Steve Harvey. The youngest of five siblings, he grew up in Cleveland and spent his early years working a number of odd jobs including as a mailman, and an insurance salesman. It wasn’t until he was in his late twenties that he first performed stand up comedy at a local club- something that would ultimately stick with him for the rest of his life. Still, it was a struggle to support himself financially. For a period in the late 80’s, Harvey lived out of his ’76 Ford and showered at a local gas station.

In 1989, the aspiring comedian’s career finally took off after finishing second at the Second Annual Johnnie Walker National Comedy Search. Since then, he has been met with nothing but success- nowadays, he has his own radio show, and talk show on television.

With such credits to his name, his net worth has of course also soared- currently, his fortune is said to be close to $100 million.

Where did his wealth come from? To try to answer that question, let’s take a deeper look at his career.

How did Steve Harvey Make His Money and Wealth? 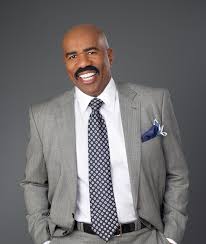 Born on January 17, 1957 in Welch, West Virginia, Steve Harvey grew up in the city of Cleveland, Ohio, with his parents and four siblings. A student at Glenville High School as a teen, he later attended West Virginia University following his graduation. After finishing his schooling, Harvey picked up a number of jobs throughout his twenties to help make ends meet; this included working as a postman, an insurance salesman and even as an amateur boxer.

It wasn’t until 1985, when he was twenty eight, that he first found his calling after performing stand-up comedy at a local club. Despite this, his financial situation proved to be rough. Unable to afford proper housing, he slept in his 76′ Ford for many years, cleaning and showering at swimming pools or gas stations.

In 1990, Harvey finally landed a lucky break after he ended up as one of the finalists on the Johnnie Walker National Comedy Search. From that, he soon landed a sting on the syndicated television show, Showtime at the Apollo, where he succeeded Mark Curry. Remaining at Showtime for many years, he ultimately stayed for a decade prior to departing in 2000. The (rather long) start of a successful career, he would have picked up a decent amount of cash in those ten years.

From there, his popularity only increased further in 1996 with the release of his own sitcom, The Steve Harvey Show, which aired on The WB Network. Starring himself as the lead protagonist, the series successfully garnered millions of viewers throughout its run. One of the most popular shows on at the time, it went on to receive heaps of accolades including nine NAACP Image Awards. After five years, Harvey decided to pursue other endeavors; the show later came to an end in 2002. Altogether, it’s estimated that he earned over $125,000 from the series.

It was ultimately during the filming of the sitcom, that Harvey became good friends with Cedric the Entertainer. Together, the two embarked on The Kings of Comedy tour in the late 90’s. One of the highest-grossing comedy tours of the United States, it banked a total of $19 million- a portion would have undoubtedly went to Harvey. By the new millennium, he was bathing in his new super stardom status.

On August 18, 2000, Harvey starred alongside Cedric in the subsequent stand-up comedy film, The Original Kings of Comedy. Filmed on a $13 million budget over two nights, it eventually took in over $11 million during its opening weekend, putting it at number two at the box office. By the end, it had a domestic gross of over $38 million.

In 2004, the comic co-starred in yet another comedy film, Johnson Family Vacation. Despite the rather negative reviews that it garnered, it was a relative success at the box office, having grossed $31.5 million from a production budget of $12 million. According to various sources, Harvey’s cut from the movie was approximately $216,000.

Despite his involvement in Hollywood, most of his attention was on television. Following the end of The Steve Harvey Show, he went on to appear in a few TV series such as My Wife and Kids (2002), and The Parkers (2003), before serving as the host of the game show, Steve Harvey’s Big Time Challenge– which ran for two years.

Branching into reality TV, he then started to host the long-running game show, Family Feud in 2010. To this day, he remains to be one of the hosts, alongside Rubin Ervin. Speaking of game shows, Harvey also guest-hosted five episodes of the popular Who Wants To Be a Millionaire that same year.

After presenting the Christian talk show, Praise the Lord in 2012, the comedian landed another career breakthrough after being given his own talk variety show, Steve Harvey. Originally premiered that September, it has received consistent ratings throughout its five year run. It wasn’t until November of 2016, that it was announced that the series would be coming to an end in 2017.

Now more involved in reality TV than ever, Harvey currently hosts a number of shows including Celebrity Family Feud, Miss Universe and Little Big Shots, all of which are still ongoing.

Aside from having hosted many of the above talk shows, Harvey has also worked on a number of TV projects as an executive producer- including: The Steve Harvey Show, Pulled Over, Big Time, Mobile Home Disaster, Think Like a Man Too, Little Big Shots, and Steve Harvey: Still Trippin’. Out of these titles, a number were also either written or co-written by the comedian himself.

In March 2009, Harvey authored his first book, Act Like a Lady, Think Like a Man which has since gone on to become a New York Times bestseller. Awarded an NAACP Image Award for Outstanding Literary Work, it eventually also spawned a feature film called Think Like a Man in April of 2012. Since then, the comic has written and published a second title, Straight Talk, No Chaser: How to Find and Keep a Man.

On top of being a world renowned television host and comedian, Harvey has a clothing line called The Steve Harvey Clothing Line which is available from a number of stores.

But that’s not all- believe it or not, he also has his own line of roasted bacon. Teaming up with Monogram Foods, the entertainer launched Easy Bacon by Harvey Foods back in the fall of 2015. Allegedly, it cooks in a mere two minutes!

In 2014, he even launched his own dating site known as “Delightful”.

Since June 25, 2007, Steve Harvey has been married to his wife, Marjorie Harvey.

Does Steve Harvey Have Any Children?

Yes, the television personality has a total of seven children. With his first wife, he has a son and twin daughters. From his second marriage, he has another son.

With Marjorie, he has three step-children, all of whom he raises as his own. As of 2016, he also has four grandchildren.

Where Did Steve Harvey Go to College?

As of 2012, Steve Harvey was renting a 6,400 square ft. penthouse suit at the top floors of the Trump International Hotel and Tower located in Chicago. Allegedly, his rent was $22,000 per month! Featuring five and a half bathrooms, the three-bedroom unit also includes a chef’s kitchen, 16-foot ceilings, three fireplaces and a butler’s pantry.

What Kind of Car Does Steve Harvey Drive?

In 2016, his wife surprised him with a white Bentley for his 59th birthday. (He later surprised her with a New Rolls Royce for her birthday)

Steve Harvey as a Philanthropist

Alongside his wife, Steve Harvey is the founder of The Steve and Marjorie Harvey Foundation- a nonprofit that helps to provide outreach to fatherless youth, by promoting leadership skills, educational enrichment, and various global service initiatives.

Through his charity, millions of dollars have gone towards the cause over the past years.

Honored with a star on the renowned Hollywood Walk of Fame in 2013, he was also given a Honorary Doctorate Degree by the Alabama State University in 2016.

Throughout his show biz career, he has accumulated well over 100 different credits to his name.

Aside from hosting his ongoing talk show Steve Harvey, the comic will also be appearing in an upcoming TV series called Little Big Shots: Forever Young (2017), which is currently still filming. In addition, it has also been announced that the three time Daytime Emmy Award-winner will be hosting the 2018 Showtime at the Apollo.