Hannah Stocking Net Worth 2018 – How Rich is the Social Media Celeb? 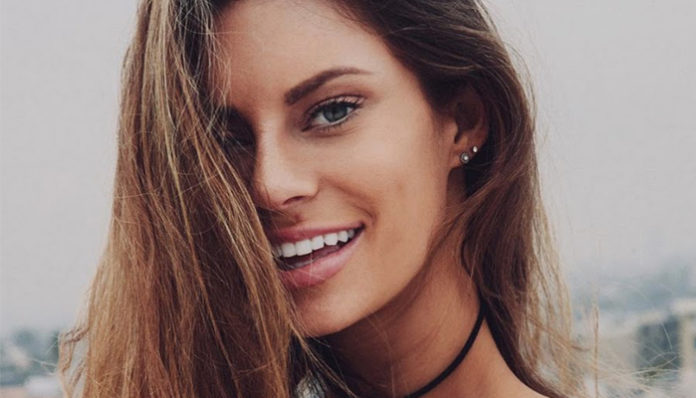 An attractive model, Hannah Stocking rose to fame on Vine after joining the video-sharing platform in 2013. Hailing from Oregon, her stunning looks had landed her a number of modelling gigs, even before she embarked on a social media career. During her time on Vine, the brunette had amassed well over 995K followers.

In addition to Vine, she’s also made a name for herself on multiple other platforms including Youtube, Instagram, and Twitter. Combined, Stocking has well over 9 million fans across the sites. Through her hard work and determination, she’s become one of the greatest stars on social media.

Monetizing on her popularity, Stocking has banked a considerable amount from her online endeavours throughout the years. Currently it is estimated that she has a net worth of $500,000. Where did she earn this amount from? What are his different sources of income?

To answer those questions, let’s take a look at an overview of her career.

How did Hannah Stocking Make Her Money & Wealth? 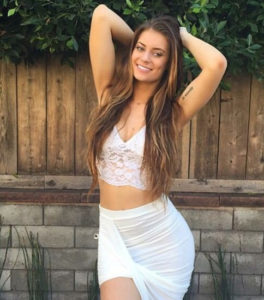 Born on February 4, 1992 in Ashland, Oregon, Hannah Stocking spent her early life in Jackson County with her parents and older sister, Ruby. As a student, she went to Ashland High School, where she was an active member of the school’s volleyball team. Even as a teen, the brunette was stunning with modelesque looks.

After graduating from high school, Stocking continued her education at the Dominican University of California where she chose to major in Chemistry and the Biological Sciences. Returning to the gym, she also joined the college’s volleyball team, in addition to playing for the Mocean Volleyball Club.

To support herself on the side, Stocking worked as a model in which she posed for a number of fashion magazines and websites. With her stunning appearance, she even landed herself a gig with Playboy. While her earnings from her modelling days have never been revealed, considering the big-name publications that she’d teamed up with, it most likely was a notable amount.

So how did the brunette get involved with social media? As it happened, her Vine career had “kind of fell into her lap”. While Stocking was attending school in the Bay Area, she went to a local gym during spring break as part of her normal fitness routine. While she was there, she was approached by a few guys- who happened to be Vine stars Destroy, Liane V, and King Bach.

From there, they eventually started a conversation with Stocking, who at that point was still relatively confused as what was going on. After talking to her for a while, the Vine stars exclaimed that she was pretty funny and asked her out; what also followed was an invitation to Vine- one of the most popular social media sites at the time (which the guys are all too familiar with).

According to Stocking, she had actually felt relieved at their meeting; newly-moved to Los Angeles from Oregon, she had “no friends” to hang out with, so to speak. In her own words, she had “been so lonely hanging out with just [her] parents and pets”. Accepting their offer, she created herself a Vine account and later joined the guys for some video-shooting the next day.

A huge success, the Vine that she guest starred in ended up getting millions of loops on their account. Thanks to the feature, the model also garnered herself more than 10,000 followers in a single day. Following that, Stocking was asked to come up with three Vine ideas by her new friend, Destorm- and so she did.

With nothing else to do, the brunette began brainstorming some ideas. After a bit of pondering, she came up with an idea which she later used for the Vine, How Girls React to Guys VS How Guys React to Girl. Nothing short of a huge success, the clip quickly went viral on the platform, which fetched her a huge amount of new fans- over 100,000 to be exact.

Rising to fame at an extraordinary rate, Stocking soon found herself with over a million followers on Vine. Motivated by the overwhelming response, she began to post more and more video clips, which only boosted her overall popularity. Before long, she was collaborating with the likes of fellow Vine stars Alx James, Melvin Gregg, King Bach, among many others. According to the brunette, they have a “friendship like business relationship” and still hang out together on a regular basis.

By early 2017, the Oregon native had a little under a million followers on Vine. A social media influencer- that is, someone with a significant audience online, she had the chance to work with several brands on a number of endorsement and sponsorship deals- her past experience as a model definitely also helped! On average, a celebrity on Vine can easily earn upwards of a few thousand dollars per campaign, depending on the company.

Despite her success and everything that she’d achieved on Vine, her being a girl in the industry led to “a lot of backlash” (many individuals latch on to male content creators). Stocking later admitted that she initially received some degree of hate online, simply for being a girl. Having said that, she was able to endure the initial struggle and was eventually able to reach a point where the hate had stopped.

In addition to Vine, the model has also enjoyed a successful career on Youtube. Around the same that that she joined the video sharing platform, Stocking created her Youtube Channel “TheHannahStocking” on September 26, 2013. Since then, her page has reached more than 1.1 million subscribers; across her videos, she’s also amassed over 90 million lifetime views.

According to Socialblade, the popularity of her channel has been increasing exponentially since January 2017- which coincidentally (or not so coincidentally) happens to be when Vine shut its doors. Currently, Stocking’s subscriber count grows by an average of 2K-4K on a daily basis. From January 2017 until now, she’s gained more than 800,000 followers on Youtube. Depending on the day, the brunette also garners a few thousand video views every day.

With that kind of audience on the site, Stocking can easily monetize her content by displaying ads on her videos. Through Google’s Partnership program, Youtubers are paid upwards of $5 per 1,000 monetized views- obviously, the web giant also takes a cut. Out of ones total video views, typically only 40% is monetized; in addition to that, the earnings also depend on a number of other factors such as content, audience and location.

On top of that, Youtube also has a Preferred Program in which companies are able to place ads on some of the site’s most popular content. Obviously, the rates and payout from this would be greater than the traditional program mentioned above.

So how much has the model earned from her Youtube account? Assuming that 40% of her total views is monetized by the site, then she is left with 36 million monetized views. From there, given that she is paid at least $2 per 1,000 views from Google, that works out to be roughly $72,000 in earnings. For a passive income, that’s pretty decent- especially for a twenty something year old.

Aside from Vine and Youtube, Stocking is also a social media influencer with over 7.6 million followers on Instagram. Similar to Vine, her status on the platform would earn her multiple opportunities for sponsorship and endorsement deals- all of which would supplement her overall income.

Currently, Hannah Stocking has an estimated net worth of $500,000. From everything that’s been said above, it can easily be seen that she’d earned most of this wealth from her success on Vine, Youtube and Instagram. At the rate that her accounts are growing, it’s highly like that her assets will continue to go up in the near future.

No, the former Vine star is not married. In the past however, she was in a relationship with NBA star, Klay Thompson. Judging from when they started to post pictures together on social media, they got together sometime in October 2014.

Despite having been pictured as such a sweet couple however, rumours about Klay having cheated on Stocking eventually emerged online in the summer of 2015- according to claims, he had cheated on her with Kerrueche Tran, Chris Brown’s ex-girlfriend.

From what we can tell, the model is currently single as of 2017.

Does Hannah Stocking Have Any Children?

No, Hannah Stocking does not have any children that we know of.

Did Hannah Stocking Go to College?

Yes, the Orlando native went to college. After she graduated form Ashland High School, she went to the Dominican University of California in San Rafael where she majored in Chemistry and the Biological Sciences. Ultimately, it was while she was studying there that she first got caught up with Vine.

Currently, Hannah Stocking resides in Los Angeles, California. Unfortunately, details on her home are unavailable as she’s never revealed any information on it herself. With her income however, the brunette would be able to afford a comfortable place for herself in the city.

We do not have any pictures of Hannah Stocking’s house to share at this time.

What Kind of Car Does Hannah Stocking Drive?

Information on the brunette’s vehicle is currently unavailable.

Who knew that she’d end up becoming a famous Vine star after meeting some guys at the gym? Since then, Hannah Stocking has become one of the most popular celebrities online with roughly 1 million followers on Vine alone. Not only that, but she’s also amassed another million on Youtube, 160K on Twitter, and over 7.6 million on Instagram.

On top of her successful career in social media, the brunette has also landed a modelling deal with Los Angeles’ Fashion Houses & Boutiques.

Just a few days ago, the star made an appearance on an ABC Nightline Special alongside Lele Pons, and Rudy Mancuso. In addition to that, she joined the 2017 Grammy Awards as a Countdown guest this past February.

Aside from that, Stocking has been up to the usual- meaning that she’s been updating her Youtube channel with new videos, and keeping her fans in touch through her Instagram and Twitter accounts.