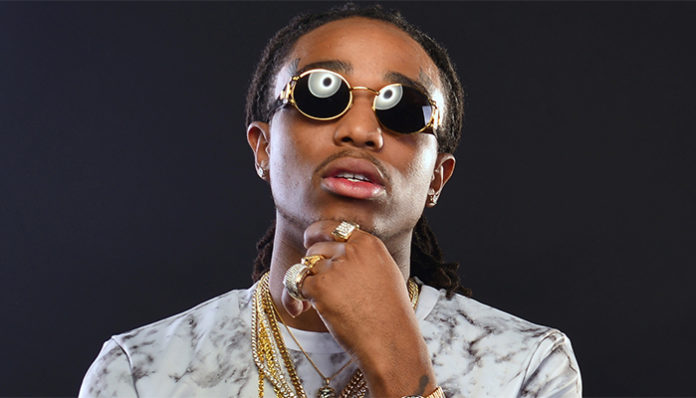 Hailing from Georgia, American rapper Quavo initially rose to fame as a member of the hip hop trio, Migos. Raised alongside his nephew, the two developed an interest in rap in their early teens; before long, they were penning and composing their own songs. As his passion for it grew stronger, he eventually opted to leave high school in order to pursue a music career.

From there, Quavo formed a hip hop crew called Migos with Kirshnik Ball, “Takeoff” and Kiari Cephus, “Offset”. In 2011, the group dropped their debut mixtape, Juug Season. However, it wasn’t until a couple of years later with the release of their single, Versace, that they first garnered widespread attention.

A well respected artist in the hip hop realm, Quavo has since also embarked on a solo music career- his debut album, ATL was recently released in June 2017. In addition to that, the Georgia rapper has contributed to a number of hit songs over the years including Pick Up the Phone, Congratulations, and I’m the One.

According to various sources, Quavo currently has an estimated net worth of $2 million. Where did he pull this amount from? Let’s find out by taking a deeper look at his career.

How did Quavo Make His Money & Wealth? 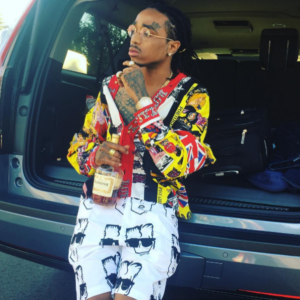 Born on April 2, 1991 in Lawrenceville, Georgia, Quavo (Real Name: Quavious Keyate Marshall) was raised alongside his cousin, Kiari “Offset”, and his nephew, Krishnik “Takeoff”. As a teen, he enjoyed sports and was a quarterback on the school football team in Berkmar High School. Ultimately, he first fell for hip hop when he was in seventh grade- it was then that he (along with his cousin and nephew) was first introduced to rap. Not long afterwards, the trio began writing their own beats and rhymes.

Wanting to pursue a full-time music career, Quavo eventually dropped out of high school during his senior year. Following that, he started to record a number of songs with Takeoff and Offset. Initially, the trio performed at a number of local clubs; to get the DJ to play their songs, they often offered to pay for the emcee’s drinks. In 2009, the crew officially came together to form the hip hop group, Migos.

In August 2011, the boys released their debut mixtape, Juug Season independently as a digital download; it was later followed by No Label in June 2012. However, it wasn’t until June 2013 that they first started to garner some buzz with the tape, Y.R.N. (Young Rich Niggas). Featuring a number of notable rappers such as Soulja Boy, Trinidad James, Gucci Mane, and Riff Raff, it boasted eighteen tracks including Chinatown, Hannah Montana, Cook It Up, Jumping Out the Gym, and Thank You God.

Met with praise, it later spawned their breakthrough single, Versace, which was made available on October 1, 2013. As it happened, the track had gone viral after Canadian rapper Drake performed a remix at the iHeartRadio Music Festival. Thanks to the feature, the record soon peaked at number 99 on the Billboard Hot 100 and at number 31 on the Hot R&B and Hip Hop Songs chart. Responsible for their rise to fame, Versace was later included in the year end lists of XXL, SPIN, Rolling Stone, Complex, and Billboard.

Since then, many popular artists have released their own remix versions of the song including Justin Bieber, Johnny Polygon, Adrien Broner, and Kap G. As of January 2017, Versace’s official music video has garnered more than 19 million views on Youtube. Migos’ first RIAA certified single, it eventually went on to earn gold certification after selling 500,000 copies in the United States.

Quavo and the boys’ next big hit was that of their mixtape, No Label 2, which was released on February 25, 2014. Featuring over 20 tracks, it included guest appearances from Rich Homie Quan, Meek Mill, and Machine Gun Kelly. Met with favourable reviews, it reached number 175 on the Billboard Top 200, number 23 on the Top R&B Albums Chart, number 17 on the Top Rap Albums Chart and number 3 on the US Heatseekers Chart. By the end of the year, the tape had spawned two singles- Handsome and Wealthy, and Fight Night– the latter of which eventually became their second gold-certified record.

On July 31, 2015, Migos came out with their debut studio album, Yung Rich Nation through 300 Entertainment and Atlantic Records. Produced by the likes of Murda Beats, Honorable C.N.O.T.E., and Zaytoven, it included the tracks Dab Daddy, Street Nigga Sacrifice, Just For Tonight, Playa Playa, Cocaina, and Pipe It Up, to name a few. A commercial success, the album debuted at number 17 on the Billboard Top 200 and sold more than 14,000 copies within the first week; later on, it also reached number 5 on the Top R&B and Hip Hop Albums chart and number 3 on the Top Rap Albums chart.

Following that, the crew dropped their next major mixtape, Rich Nigga Timeline in November 2014. Incorporating a mix of gangsta rap and trap, it came with eighteen tracks including the titles What Y’all Doing, Wishy Washy, Came to Party, Can’t Believe It, Buyin Em, and Came to Party. Hailed as one of the best rap albums of 2014 by Rolling Stone, it successfully reached number 6 on the US Heatseekers Chart. To date, the tape has been streamed millions of times online.

On September 17, 2015, Quavo, Takeoff and Offset received another boost in their popularity with the release of their mixtape, Back to the Bando. Produced by Drumma Boy, Murda Beats, TM88, OG Parker, and Zaytoven, among a few others, it was generally praised by fans, although it didn’t end up charting like the group’s earlier efforts. That October, it produced the single, Look at My Dab, which charted on the Billboard Top 100, Top R&B and Hip Hop Songs Chart and the Top Rap Songs Chart.

The next summer, the crew dropped their first extended play dubbed, 3 Way on July 7, 2016. Released through YRN the Label and Quality Control, it included five tracks- 3 Way, Savages Only, Coppers and Robbers, Can’t Go Out Sad, and Slide On Em, the last of which featured Black Youngsta. Produced by Dun Deal, Cassius Jay, Ricky Racks and Zaytoven, the general consensus for the EP was positive.

Recently this year, Quavo and his two sidekicks returned to the forefront of the rap game with their second full length album, Culture. Featuring an hour’s worth of hip hop and trap, the project included guest appearances from Lil Uzi Vert, Travis Scott, Gucci Mane, 2 Chains, and DJ Khaled. Their most successful release to date, the album entered the Billboard Top 200 at number one and sold 131,000 units by the end of the first week. Not only did it top the Billboard 200, but it also reached number one on the Top R&B and Hip Hop Albums chart and the Canadian Albums Chart.

In addition to their solo projects, Migos has also collaborated with and released a number of mixtapes with Rich The Kid, QC the Label, Gucci Maine, and RYN Lingo. As well, they’ve contributed to the hit songs, Pick Up the Phone by Travis Scott, Bad Intentions by Nike Heaton, Congratulations by Post Malone, and Slide by Calvin Harris, among others.

As far as acting goes, the group has appeared in a short film called, Bando in 2014. In 2016, they were also featured in an episode of the comedy drama, Atlanta.

From everything that we’ve said so far, it’s obvious that a chunk of Quavo’s fortune came from his success with Migos. From small music group to attaining multi-platinum accreditation from the RIAA, they’ve come a long way since their debut in 2009.

On top of his work with Migos, Quavo has recently also embarked on a solo music career. In 2016, he contributed to the hit single, Champions which also featured Travis Scott, 2 Chains, Big Sean, Kanye West, Designer, and Yo Gotti; considerably popular, it ended up reaching both the Billboard Top 100 and the Top R&B and Hip Hop Songs chart.

Just a few days ago on June 23, 2017, he released his solo album entitled, ATL. Made available through New Power Soul, the long awaited project contained eleven numbers including Blackman, Push it 2017, Trapstar, Feel Me, I Got a Check, Sexy Girlfriend, and Just; it also featured guest appearances from artists Ty Dolls Sign, Rich the Kid, Remy Ma, O.T. Genesis, and PARTYNEXTDOOR.

Aside from what he’s managed to bank from his record sales, live concerts are another major source of income for the star. Speaking of which, Quavo, Offset and Takeoff are currently among those in the lineup for the Nobody Safe Tour, for which they’ve been hitting the roads for since January. As of 2017, Migos has performed at dozens of different cities all around the world from Miami Beach Florida, to Malmo, Sweden.

No, the Georgia rapper is not married- however, he’s been in a relationship with actress Karrueche Tran since January 2017.

Previous to that, he was romantically linked with actress Lira Galore.

Does Quavo Have Any Children?

No, Quavo does not have any children that we know of.

Did Quavo go to College?

No, Quavo did not go to college. In fact, he had dropped out of high school during his senior year to pursue a career in hip hop.

Where Does Quavo Live? Pictures of Quavo’s House

While it’s assumed that Quavo still resides in Georgia, we do not have any details on his current home at the moment. Considering how wealthy he is however, it’s probably not too far fetched to say that he’s able to afford a nice abode for himself in the city.

Unfortunately, we do not have any pictures of Quavo’s house to share at this time.

What Kind of Car Does Quavo Drive?

According to various sites, the rapper recently added a Lamborghini to his vehicle collection.

Recently, the rapper has even made his debut as a solo recording artist with his first studio album, ATL (2017).

In addition to his solo album, Quavo made a couple of guest appearances in Jacquees’ B.E.D. (Remix), and Halsey’s Lie.

The Gazette Review is your daily news source covering everything from world news to personal finance. We provide the most recent, unbiased accounts of the news that matters to you. Contact us: ed[email protected]