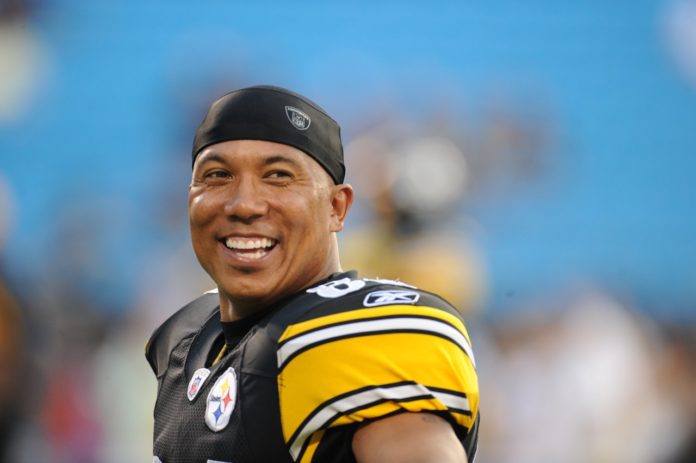 The sport of American football attracts millions of different kinds of people. It’s probably one of the most popular sports in the entire country, and there are a lot of people who compete in football at both the collegiate and professional level. These people often come from a variety of different backgrounds. Especially as the NFL becomes a more popular form of entertainment internationally, people of different nationalities are drawn to the sport. In this article, I’m going to be talking about some of the greatest Asian football players to ever play the game. I will rank these players based on what their renown in the sport. Although the rankings are subjective, I don’t think that the accomplishments of these men can be denied. Without further ado, let’s dive right into this list. 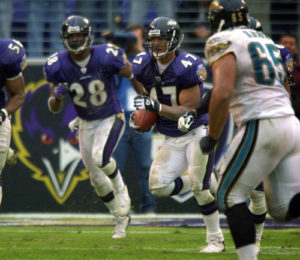 The first player that we’re going to be talking about is Will Demps, a safety. Demps was born to an African American father and a Korean mother, and he grew up with the both of them for most of his life in California. He seriously began his football career as a walk-on to San Diego State University, where he was named an All-Mountain West first-team selection twice. Demps had a pretty impressive career at the college level, recording 229 tackles and five interceptions over the course of just two years as a starter. Due to his pretty successful career in college, he decided to enter the NFL. Although he went undrafted, he was signed as a free agent by the Baltimore Ravens. Demps started with the Ravens for a few seasons, between 2002 and 2005. He suffered an injury in 2005 which led to him eventually being released by the Ravens. Demps played a little bit with the Giants and the Texans as well, and he ultimately retired from the NFL in 2009. 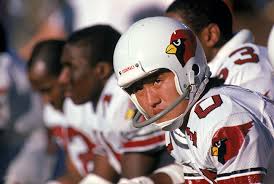 Min Long Lee is probably more commonly known as John Lee. He was originally born in Seoul, North Korea. He would play college football for the UCLA Bruins as a placekicker, where he did exceedingly well. Due to his stellar play at the college level, he was able to record multiple different records. For instance, he holds the highest percentage of PAT and field goals made in a career, with 93.3%. He also broke a conference record for single game field goals, with him making six field goals in a game against the San Diego State Aztecs. Lee was so talented as a placekicker that he was actually drafted in the second round of the NFL draft in 1986 by the St. Louis Cardinals. This made him the first Korean person to play for the NFL. Lee stumbled a bit and had a short career in the NFL, but he is a member of the UCLA Athletic Hall of Fame today. 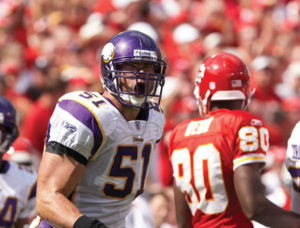 The next talented Asian football player on this list is Ben Leber, who originally played as a linebacker. In high school, Ben originally doubled as a running back, where he proved to be seriously talented. However, in college he began to play for Kansas State and officially switched to the linebacker position. Leber recorded 216 tackles during his career with Kansas State, which was the fifth highest number of career tackles by a player in Kansas State history. By the time he graduated, Ben was considered skilled and responsible enough to be a team captain. Leber entered the NFL draft as a promising prospect, and he was eventually drafted by the San Diego Chargers during the third round. Although he was a rookie, he was pretty much immediately thrown out there to start. Leber saw a relatively stable career with the San Diego Chargers and the Minnesota Vikings before he ended up retiring with the St. Louis Rams in 2011. 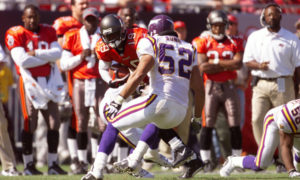 Next is Kailee Wong, who was born in Eugune, Oregon to a Chinese father and a Hawaiian mother. He played high school football with North Eugene High School, where he was seriously dominant as a fullback. However, when he was recruited by Stanford, they told him that he wouldn’t really be able to play as a fullback if he came aboard their team. Given the prestige of Stanford’s program, I don’t think that it’s much of a surprise that Kailee decided to go along with that limitation. He ended up spending the remainder of his career as a linebacker, wher he was successful. Wong was drafted in the second round of the 1998 NFL Draft by the Minnesota Vikings, and he saw a major career highlight in 2001 when he returned an interception against Brett Favre for a touchdown. He left the Minnesota Vikings and signed onto the Houston Texans as a free agent in 2002. He remained with the Texans until 2006, when he decided to retire. 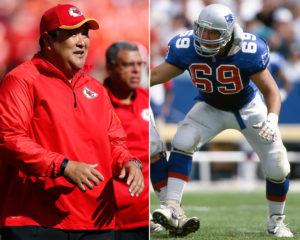 All of the Asian football players that I’ve mentioned thus far are completely detached from football today, but that isn’t really the case with Eugene Chung. He played college football with Virginia Tech as an offensive tackle, and Chung did so well that he was actually drafted in the first round of the 1992 NFL Draft by the New England Patriots. This made Chung the first Asian person to have been drafted in the first round since 1962. Eugene played with many teams during his career in the NFL, including the Jacksonville Jaguars, the Indianapolis Colts, and the Kansas City Chiefs. When he retired from the NFL in 2000, however, Chung didn’t just walk away from the game altogether. Today, Eugene serves as the tight end’s coach, the run game coach, and the assistant offensive line coach for the Philadelphia Eagles. He’s been the assistant offensive line coach with the team since 2010. 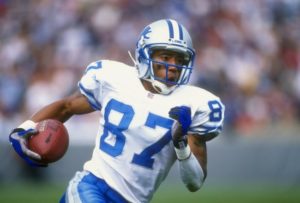 We’ve spoken about Asian players who play at a wide variety of positions in this article, but we haven’t mentioned any wide receivers just yet. Johnnie Morton is a wide receiver who played college football for the University of Southern California between 1990 and 1993. He’s still considered somewhat of a hero by the program due to the phenomenal play that he had while he was with the team. He broke many records held by the school and the conference, related to both receptions and receiving yards. He was awarded the Pop Warner Trophy in 1993. He was drafted in the first round of the 1994 NFL Draft by the Detroit Lions, and he played with the team between 1994 and 2001. Johnnie played primarily as a slot receiver, and he became a central cogs to Detroit’s offense, alongside Barry Sanders. That particular team has been home to plenty of talented offensive players, and Morton is still the third ranked player to ever play for Detroit in terms of receptions and receiving yards. 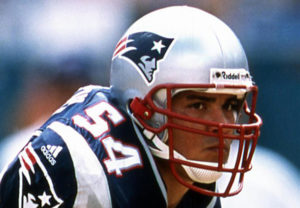 Tedy Bruschi is a massively successful football player. He was born to an Italian father and a Filipino mother, and he’s best known for his play as a linebacker. (He played many sports in high school, but he ultimately decided on football.) Tedy played football for the University of Arizona for four years, where he was able to tie the NCAA Division I sack record with 52 sacks over the course of his career. He was a Consensus All-American twice in college, in 1994 and 1995. Bruschi was only drafted in the third round of the 1996 NFL Draft, but he made his mark on the league very quickly. He was a phenomenal pass rusher, and throughout his career with the New England Patriots he became known as a guy who played aggressively and was able to make big plays. In his career, he recorded 1,110 tackles, 30.5 sacks, 12 interceptions, and 11 forced fumbles. In honor of his incredible achievements, he was voted into the College Football Hall of Fame in 2013. 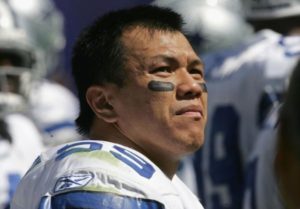 Speaking of successful linebackers, the next Asian football player on this list is none other than Dat Nguyen. Nguyen’s parents came to America from South Vietnam as refugees. He was mostly a middle linebacker in high school, but he also played as a punter. He received significant offers from many colleges, but he decided to play college football with Texas A&M in order to remain close to his family. Nguyen proved to be a serious force on the field, despite the fact that he was a lot smaller than most other middle linebackers. He made plays and he was a strong leader, which is all that you can really ask for at that level. Dat was then drafted by the Dallas Cowboys in the third round of the 1999 NFL Draft. (Despite his outstanding play in college, people were still concerned about his size.) Nguyen had a short but bright career with the Cowboys before he retired in 2006 due to injury. In 2017, he was voted into the College Football Hall of Fame. 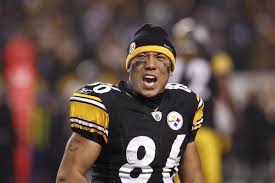 Hines Ward only retired sort of recently, so you can still definitely feel his influence on the NFL as a whole. Ward was born in Seoul, South Korea, and he played college football with the University of Georgia. He had a pretty decent career with Georgia, which allowed him to be drafted in the third round of the 1998 NFL Draft by the Pittsburgh Steelers. Ward is probably one of the greatest offensive players to ever play for the Steelers. Hines played with the Steelers for a total of 14 seasons, and he has set a ton of different records with the team that still stand to this day. He was even named a Super Bowl MVP following the team’s victory in Super Bowl XL. By the end of his career, he had recorded 1,000 receptions, 12,083 receiving yards, 12.1 yards per reception, and 85 touchdowns. He works in broadcasting now, but I don’t think anyone will ever forget what he was able to contribute to this team. 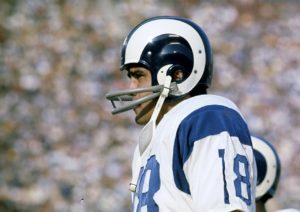 I mentioned before that Tedy Bruschi was the first Asian player to have been drafted in the first round of the NFL Draft since 1962. Roman Gabriel is the player who was drafted back then in 1962. He was born to an Irish mother and a Filipino father, and despite health problems when he was young, Gabriel grew up to be an incredible quarterback. He was drafted by the Los Angeles Rams with the second overall pick of the 1962 NFL Draft, which made him the first Asian player to have been drafted in the first round ever. Gabriel had an incredible career with both the Rams and later the Eagles, and he was named the NFL Most Valuable Player in 1969. He led the NFL in both passing yards and passing touchdowns in 1973. There are many people who believe that Roman Gabriel was the best quarterback in the NFL during his time. He officially retired from the game in 1977, and in 1989 he was inducted into the College Football Hall of Fame.