Before appearing on Shark Tank, the entrepreneurs behind Handbag Raincoat managed to gain some traction. They founded their business in 2015 when they discovered an answer to a problem many women experience every day – getting their expensive purses ruined in the rain. Us Weekly, Vogue, a Parade Picks article, Oprah magazine, and smaller fashion blogs featured the duo in editorials that led to a flood of sales. They also managed to get their products into The Container Store, Bed Bath and Beyond, and Nordstrom. The product in question is water-repellent plastic intended to protect purses from the elements.

Before starting her own business, Morgan was a fashion major in college. She worked at a famous high-end handbag company named Rebecca Minkoff as an assistant fashion designer. She would use that experience to shape her new brand. 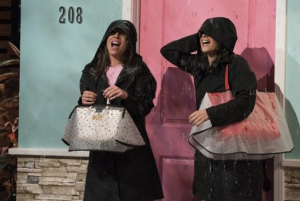 Hand in hand, sister entrepreneurs Morgan and Arley walked out to the Shark Tank stage. The women looked excited and ready for their presentation wearing matching jeans and short-sleeved pink T-shirts. The guest judge was Sarah Blakely, the founder and CEO of Spanx. The pair received a surprised look from Mark Cuban when they said they were looking for $300,000 in exchange for a 25% stake in their company, Handbag Raincoat. Morgan and Arley spoke many of their sentences in unison. The Sharks were almost sure they were twins.

The women went right into a skit, saying that it was the perfect day to go shopping as it was bright and sunny. There was only a 20% chance of rain. They moved in front of a facade made to look up at the house’s front door with their purses. There was a crack of thunder as Morgan exclaimed in dismay at the incoming rain. They said that hurricane Barbara was about to hit the Tank. They urged everyone to take out their rain gear, putting on two black raincoats. Arley screamed that their handbags would get ruined in the water pouring over them.

Of course, it was not an issue. The sisters had invented this perfect solution, the Handbag Raincoat. Arley came back with both of their purses wrapped up with a decorative plastic covering. Arley claimed, but the bag would keep their purses safe and clean from the rain. They both had to scream their words over the pouring water. The Sharks looked bemused and a little concerned.

Barbara received her sample first, stating that yellow was her favorite color. When they came to Kevin, they offered him a yellow one for his wife, and he jokingly said that he needed one for his bag. Everyone laughed. The Sharks eagerly opened the packages as Barbara asked how much the bag covers cost to make. The girls answered in unison that the bags only cost $1.00 to make, no matter what size they were. They had healthy margins for each size. 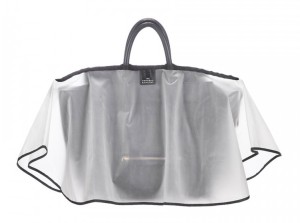 Morgan had previously explained that she was a fashion major who worked with handbags for six years. Every time she hung out with her coworkers and it was raining, they would refuse to bring their bags for fear of damaging them. Arley excitedly told the Sharks they made their first products out of shower curtains, attempting to fix this unvoiced issue. They have a utility patent pending for the closure of the covering.

Kevin appeared to be charmed by the two women but still jumped straight into business. He asked them how much he made for the year. They advised that they made $125,000. Barbara wanted to know if that was purely online with retail. Morgan let her know that they had a test market online with bed bath and beyond, which they passed. They were gradually introduced to the retail market, getting into about a hundred Bed Bath and Beyond stores. They also managed to get into Nordstrom and The Container Store.

Kevin believed their sales needed to be in the millions instead of the six digits. Mr. Wonderful demanded to know why their sales seemed pretty stagnant considering their product and the problem they were attempting to solve. Morgan admitted that they hadn’t done any marketing or advertising for their product. They did the sales organically, getting a bunch through Oprah’s magazine. Handbag Raincoat was then put on the view and sold 10,000 units. They weren’t in any debt, being able to break even.

Sarah wanted to know how much they had put into the business so far, and Morgan let her know that they had raised over $300,000 on their own from friends and family. The funding led them to be able to get the business off the ground and buy the first few rounds of materials. Kevin wanted to know if they had sold any portion of the company, and Arley admitted that they only owned 84%. Kevin was concerned that people would start knocking off the product pretty fast.

Arley insisted that they already had two design patents, and they shut down two copycats, costing them about $10,000. Another company they are worried about is a colossal handbag company using their name and charging $650 for each. The business partners explained that they were looking for a Shark for the business capital and strategic partners. They wanted to expand into backpack raincoats and shoe covers. They want to “fully own the rain.” 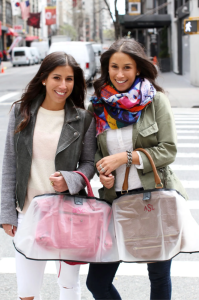 Mark was the first to turn down their offer. He doesn’t think they are willing to do whatever it takes. He pointed out that they’ve had the opportunity to grow the business at the peaks, and they chose instead to pursue the lawsuits. They were hoping for the product to build up momentum on its own, and in the course of that, they let opportunities pass them by. He was the first to go out, and Barbara went next.

Sarah said that she saw a lot of similarities between their journey and her own when she created Spanx. She said that her product was also knocked off by many companies when she first launched, but instead of pursuing lawsuits, she chose to keep inventing and developing the following best product. She said that she would not use the product herself as much, and that’s how she likes to invest. Sarah chose to go out.

Sarah went out of the running, and Kevin was up next. He went into the numbers and let them know that their valuation was off by ten times. Kevin stated that he knows how to fix the problem of the large company trying to knock off their product, but he likes spending money on sales, not litigation. It’s not a great place to build value. Kevin went out.

Lori told them that the umbrella had covered everything, including the purse. She liked their energy. She thought they had a cute product, but it wasn’t life-changing. Lori informed them that they were hirable, but she went out. The girl smiled, thanked the Sharks, and walked arm in arm off the stage. The Sharks all said good luck in unison. Morgan stated that they thought the Sharks focused too much on the numbers in their after-show interview.

Handbag Raincoat Now in 2022 – The After Shark Tank Update 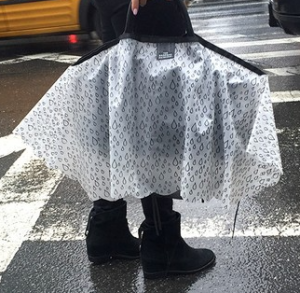 The first sign that Handbag Raincoat was out of business was their abandoned Facebook page. Although the page has 1603 likes and 1659 followers, the cheerful pair of sisters have not made a new post since the night they aired on Shark Tank. The page has been sitting empty since 2018. Their website, handbagraincoat.com, is completely inaccessible. While it looks as if you would be able to buy the unique items on the website, it comes up as a security risk and a 403 error. There are strongly worded comments from angry customers who bought products but never received them or correspondence from the failed business.

So, what happened to Arley and Morgan, the dynamic duo who got rained on the right on the Shark Tank stage? Morgan was much harder to track down. According to Arley’s LinkedIn, she is currently the senior manager of Team Boomer and program events at Boomer Esiason Foundation. She lists herself as the cofounder of Handbag Raincoat until December of 2019, which must be when the business officially crumbled. Her various social media profiles still have her occupation listed as Handbag Raincoats. Unfortunately, it looks like the copycat products won out. If you’re looking for similar products and are disappointed that the handbag raincoat is no longer in business, you can find many similar items across the Internet, including on Amazon.