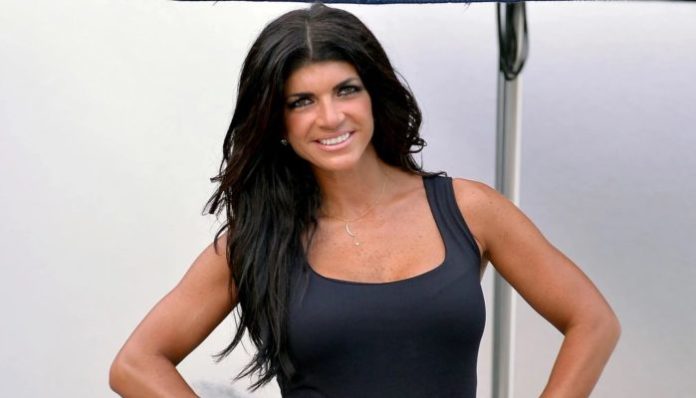 Teresa Giudice is an American reality television star, author, and entrepreneur. Teresa is best known for her starring role in the Bravo reality television show “The Real Housewives Of New Jersey.” Teresa is also known for a prison sentence that she served in recent years alongside her husband, Joe Giudice. Today we are going to take a closer look at how she earned her fame and fortune.

How Did Teresa Giudice Make Her Money & Wealth?

Born Teresa Gorga to her Italian parents, Teresa was raised in Paterson, New Jersey. Her parents were immigrants that came to America in the early sixties. Teresa was raised Catholic and still practices the religion at the time of this writing.  Teresa has one sibling, a younger brother named Joey. Teresa attended college at Berkeley College located in New Jersey. While there, she studied fashion marketing.

Teresa first started her career working at Macy’s as an associate buyer. Associate buyers purchase products or services for their company and are tasked with obtaining the highest quality goods for the lowest prices. They study sales records and inventory levels of current in-store stock to evaluate what product is needed.  Teresa was qualified for the job at Macy’s as a result of studying fashion marketing in college.

After years at Macy’s, Teresa was cast to star in “The Real Housewives of New Jersey”. She has been a part of the series from the first season which helped skyrocket her success. She has also published three cookbooks that had immense success. The cookbooks feature several recipes created by Teresa’s mother. She credits those particular recipes for the success of her cookbooks. The cookbooks that she has released are titled “Skinny Italian,” “Fabulicious,” and “Fabulicious!: Fast and Fit.” The books were released in 2010, 2011, and 2012. Teresa also went on to publish and co-write a memoir based on her time in prison. The book was titled “Turning the Tables: From Housewife to Inmate and Back Again.” All of Teresa’s books have gone on to become best sellers within days of their release. Teresa has also released her own line of alcoholic beverages. Her most successful was called the “Fabellini” which consisted of several different types of Bellini. Teresa also went on to create a hair care line, but it failed with little to no income being made off of the products.

In late 2012, Teresa was offered a spot on the upcoming season of “Celebrity Apprentice.” She placed fifth during the competition and as a result, was able to raise over $70,000 for the charity of her choosing. She was fired on the twelfth episode which is quite the feat.

Speaking of charities, Teresa also has her own charity called “Project Ladybug.” Project Ladybug is a charity designed to help children who are chronically ill. The funds allow for the children to get the treatments that they may need, but can not afford without help.

In early 2017, Teresa along with her brother and sister-in-law opened a restaurant. The restaurant is based in East Hanover, New Jersey and is named “Gorga’s Homemade Pizza and Pasta.” The restaurant specializes in pizza and Italian food, and has received several praising reviews since it opened. Gorga’s has seen a huge spike in popularity since the grand opening, and has become so popular that they added an online shop where their fans can buy a jar of their authentic pasta sauce. Teresa has stated that the restaurant has been a great outlet for her, and has helped keep her mind off of her husband’s prison sentencing. 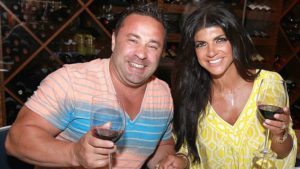 Yes! Teresa is married to Joe Giudice. The pair has been married since 1999 and will celebrate their 18th anniversary this year. We wish them several more happy years together!

Does Teresa have any children?

Yes! Teresa has four beautiful daughters with Joe! Their names are Gia, Milania, Audriana, and Gabriella. The girls range in age from 15 to 8. The girls are being raised Catholic just as their mother was. In fact, Gia has recently undergone her confirmation as a result of her faith.

Why did Teresa Giudice serve time in prison?

Teresa served time in prison as a result of several different charges that were brought up against her. Some of the charges against Teresa were a conspiracy to commit wire fraud, mail fraud,  and bank fraud. She was also charged with bankruptcy fraud after filing in 2009. Teresa was also charged with putting false information on a loan application. In 2014, Teresa pleads guilty to over forty counts of fraud after making a deal with the prosecutors involved with her case. The fraud actions that Teresa and her husband acted in allegedly earned them over $5 million dollars over the span of 10 years.

In late 2014, Teresa was sentenced to 15 months in a federal penitentiary. Her husband, Joe, on the other hand, was sentenced to 41 months in federal prison. As a result of his arrest, Joe could face deportation to Italy. As it was recently released that Joe was actually an Italian resident living in America illegally. Teresa has stated several times since being released from prison that her outlook on life has changed. As a result she says that she will never be away from her daughters for long periods of time unlike when she was in prison.

What does Teresa Giudice Drive? 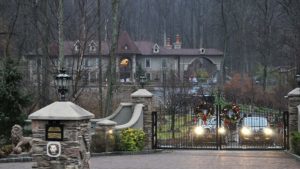 Teresa currently drives a beautiful 2016 Lexus LX570, which retails for $90,000. She received the car as a welcome home gift from her husband, when she returned home from prison.  With Teresa in jail for 11 months the family sold her previous vehicle, and her husband was so excited for her return that he splurged and bought her this luxury vehicle to drive.  The vehicle has 8 passenger seating, a V8 engine, and a staggering 383 horsepower.

Does Teresa Giudice have a mansion? 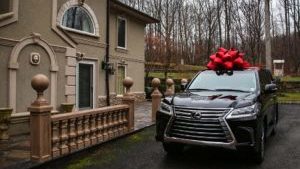 Yep, Teresa and her husband own a massive 10,000 square foot estate in Montville, New Jersey. The home has six bedrooms, spans 3.5 acres, and is valued at 3.9 million dollars. The couple also owns a lovely vacation property.  The West Beach Haven property has four bedrooms and is valued at $325,000.

Does Teresa have any upcoming projects?

Since being released from prison Teresa has been a part of several different projects and is scheduled to take part in several more. Teresa has continued to be a main cast member on “The Real Housewives of New Jersey” and will continue to star on the show alongside her four daughters. Teresa is also scheduled to appear on the popular entertainment show “Extra” several times this year. You can also expect to see Teresa on “The Insider” later this year where she will be opening up more about her prison sentence. Teresa has also stated that she wishes to release new books in the near future. Teresa also posts sponsored ads on her Instagram account which also bring her quite a big chunk of change with each post. It is estimated by several sources that the reality star earns up to $15,000 for each post the she makes for a company.

As you can see Teresa is one very busy woman. Teresa’s fortune is sure to grow while she is pursuing all of her projects in the very near future. Teresa has stated that each project that she takes on helps take her mind off of her husband’s prison sentencing. We are sure to see her in several different projects as they are good for her mental health and allow her to earn a living for her family.