Tyron Woodley Net Worth 2018 – How Wealthy is the Mixed Martial Artist Now? 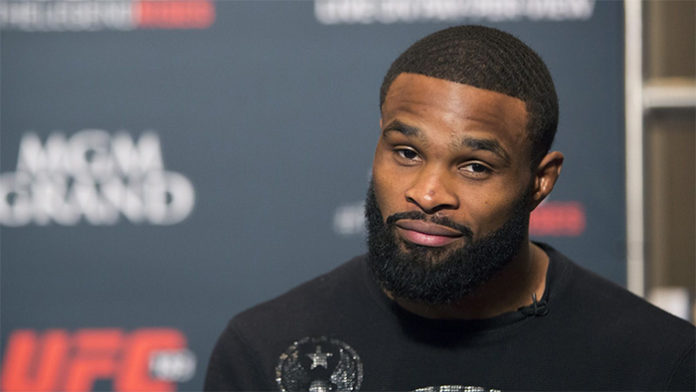 A former amateur wrestler, Tyron Woodley is perhaps best known as the UFC Welterweight Champion. Born into a big family, him and his twelve siblings were raised single handedly by their mother. As a teen, he first got involved with martial arts after walking into a local gym, and signing up for an amateur fight card; he later went on to win his first match with a perfect record.

Since then, he has fought for both Strikeforce and the Ultimate Fighting Championship. Throughout his career so far, Woodley has participated in more than 20 fights, with well over a dozen wins. In the summer of 2016, the Missouri native defeated Robbie Lawley to win the UFC Welterweight Championship- a moment that remains to be one of the greatest highlight of his entire career.

A sports celebrity with his own impressive fan base, one has to wonder- how much has Tyron Woodley made from his martial arts career? According to various sites, he currently has an estimated net worth $4 million. Let’s take a further look at his career to see where this wealth came from.

How did Tyron Woodley Make His Money & Wealth? 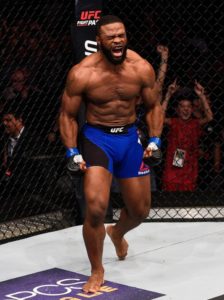 Born on April 17, 1982 in Ferguson, Missouri, Tyron Woodley was raised alongside his twelve brothers and siblings a few miles from the city of St. Louis; his mother had single handedly brought them up after their father left the family early on. As a teen, Woodley excelled in school; not only was he an honor roll student every year, but he’d also received donors in football- a sport that he’d come to grow fond of.

Aside from football, Woodley was also into wrestling and had obtained a state title after finishing with a score of 48-80 during his high school years. Ultimately, he had gotten into the sport after stumbling upon a local MMA gym, after which he participated in an amateur fight card (which he later walked away from, victorious). Following his graduation in 2000, he received several offers from those in Missouri, North Iowa and Nebraska.

Initially, Woodley had committed to Nebraska following a recruiting visit; however upon learning that their head wrestling coach had resigned, he made the decision to attend the University of Missouri, with plans of rebuilding their wrestling team. After four years of studies, he received a bachelor’s degree in Agricultural Economics.

In February 2009, he martial artist had his first professional fight at the Holiday Inn Executive Centre in Columbia, Missouri, against Steve Schnider. Streamed live, Woodley ultimately won the initial battle, to go up against Jeff Carstens in the second round; he eventually came out as the victor after forcing his opponent to submit.

From there, he made his Strikeforce debut in his hometown of St. Louis; he had landed a spot after contacting Javier Mendez- Robbie Lawler’s manager after being given his number at a precious NCCAA wrestling tournament. Held in June 2009, he won his first match at the Strikeforce: Lawley vs. Shields event through submission. Following his big win, he was signed with Strikeforce to a six-fight deal.

With that, he fought for Strikeforce for the second time on the Kennedy vs. Cummings Card, during which he successfully beat the Iowa-based martial artist, Zach Light. After a third fight (and eventual win) against Rudy Bears, he signed on with EA Sports to participate in EA Sports MMA. Continuing to take part in Strikeforce events, Woodley later fought against Tarec Saffiedine at Strikeforce Challengers: Woodley vs. Saffiedine in January 2011.

After many years of fighting for Strikeforce, Woodley made his UFC debut at the UFC 156 in February 2013. After a win via KO, he went up against Jake Shields at UFC 161, followed by a fight against Josh Koshcheck at UFC 167. From there, he participated at UFC 171, during which he faced Carlos Condit, a former Intermin Welterweight.

In the summer of 2014, Woodley battled Dong Kyun Kim at UFC Fight Night 48, after being chosen to replace Hector Lombard. With a little luck, he eventually won via TKO in the initial round- his performance later earned him a Performance of the Night award. The next year, he faced Kelvin Gastelum at UFC 183 and Johny Hendricks at UFC 192.

In January 2015, the martial artist won against Kelvin Gastelum via split decision. Although it was originally planned for him to fight Johny Hendricks at UFC 192, he was later forced to drop out due to weight cutting complications. Over a year later, Woodley battled Robbie Lawley from San Diego, at the main UFC 201 event; after winning the fight, he won the winner’s title at the UFC Welterweight Championship.

From everything that we’ve said, it’s clear that most of the 35-year-old’s fortune came from his countless wins in the ring. Currently, it is estimated that he has a net worth of $4 million.

Yes, the martial artist is married- he’s been with his wife Averi Woodley, the co-owner of ATT Evolution for several years. It’s unknown whether or not Woodley has dated anyone in the past.

Does Tyron Woodley Have Any Children?

Yes, Woodley has four children with his wife- three sons and a daughter.

Did Tyron Woodley Go to College?

Upon graduating from McCluer High School in 2000, Woodley went to the University of Missouri where he studied Agricultural Economics; he later obtained his bachelor’s in 2005.

According to a posted video on youtube, Woodley recently bought a new house this summer. Unfortunately for us fans, not much has been revealed about his pad. We do not have any pictures of Tyron Woodley’s house to share at this time.

What Kind of Car Does Tyron Woodley Drive?

We do not have any information on Tyron Woodley’s vehicle at this time.

Throughout his professional mixed martial arts career, Tyron Woodley has participated in a total of 21 games- 17 of which he won (e.g. 6 via knockout, 5 via submission, 6 via decision). Signed onto UFC, he is also the current UFC Welterweight Champion.

How Much Did Tyron Woodley Make Last Year?