Gabbie Hanna Net Worth 2018 – How Rich is the Vine Star 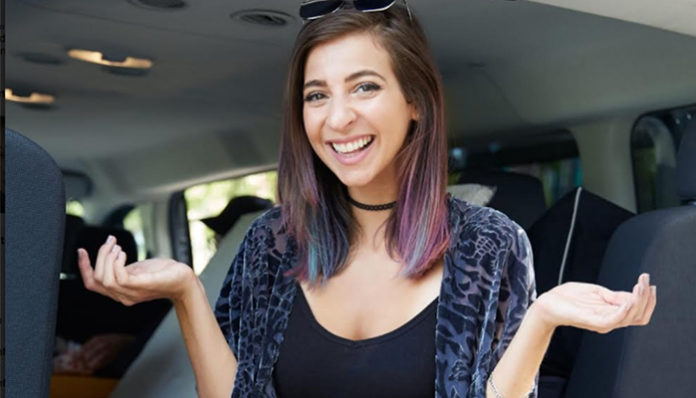 A social media star with millions of followers, Gabbie Hanna first rose to fame on Vine for her funny six-second clips. Hailing from Pennsylvania, she worked as a waitress after graduating from college prior to her rise to fame on the web. From there, she moved to California to work with Buzzfeed, before attaining widespread fame as a Vine celebrity.

One of the most popular female stars on the video-sharing platform, she had more than 4.7 million followers by the time Vine closed in early 2017. Aside from that, Gabbie is also widely known on Youtube for her vlogs, pranks, and challenge videos. As of 2017, her channel has over 4.6 million subscribers (and counting!).

Throughout her career, the 26-year-old has collaborated with several other popular stars including Landon Moss, Jessie Smiles, All James, and Brennen Taylor. Nowadays, no secret that one can make a decent income through social media- so then, how wealthy is Gabbie? According to sources, the Youtuber currently has an estimated net worth of $450,000.

Wondering where she earned that money from? What are her biggest money-makers anyway? Let’s take a closer look.

How did Gabbie Hanna Make Her Money & Wealth?

Born on February 7, 1991 in Pennsylvania, Gabbie Hanna was raised in New Castle with her six brothers and sisters. Unfortunately, not much is known about her early childhood. After completing her degree at the University of Pittsburgh, where she majored in Communications and minored in Economics, she worked as a waitress to support herself. From there, she eventually relocated to Los Angeles to work with Buzzfeed.

Around that same time, she decided to join Vine after seeing some videos on there that made her laugh. With her relatable humour, her clips quickly caught on; it wasn’t long until her Vines were garnering thousands of views each. As Gabbie continued to post new content onto her page, her follower count went up- within a few months, the brunette had over one million fans, an impressive feat for any social media user.

Steadily rising in fame, Gabbie eventually collaborated with over Vine stars including All James, Jessi Smiles, Chad Perez, Brennen Taylor, and Landon Moss. Thanks in part to the collaborations, she not only gained further exposure, but her fanbase also expanded considerably. By the time it was announced that the app would be shut down, she had become one of the most popular female stars on Vine with over 4.7 million followers; her last clip was uploaded on October 30, 2017.

Since then, the 26-year-old has been focusing her efforts on her Youtube channel, which she had launched back in February 2014. Known for uploading rants, vlogs, pranks and challenge videos, Gabbie has effectively made her mark on the site over the last two years. As of 2017, she has amassed more than 4.6 million subscribers with over 458 million lifetime views. With those kind of numbers, it goes without saying that she’s been monetizing on her popularity.

So far, her most popular upload, Remaking My 14 Year Old Sister’s Cringey Musical.lys has been viewed over 20.6 million times. Some of her other top videos include Reacting to Our Cringey Vines! w Liza Koshy, Making Out with Shane Dawson, Reacting to People who Smash or Passed me, and Cutting My Hair Off. Given that she’s a Youtube partner, Gabbie would have earned a decent amount from her channel already- but how much?

According to sources, Google typically pays its users upwards of $5 per 1,000 monetized views as part of its partnership program; by displaying ads on their videos, Youtubers are able to make a decent amount of passive income through the site. Assuming that 40% of Gabbie’s total views are monetized and that she makes at least $2 per 1,000 views, she would have made close to $200,000 from her channel already.

Offline, the 26-year-old also has a few things going for her- including television appearances. In 2015, she made her small screen debut in an episode of the mini-series, Oscar’s Hotel for Fantastical Creatures. From there, Gabbie appeared as a dancer in Dance Showdown (2015), before appearing on film for the first time in the comedy, Laid in America (2016).

Most recently, she joined the cast of the Youtube Red mystery, Escape the Night (2017)– a mystery web-series starring several social media stars including Timothy DeLaGhetto, Matt Haag, Lele Pons, Shane Dawson, Jesse Wellens, DeStorm Power, among many others. A character from season two, the brunette played as The Vaudevillain in the seventh episode.

As far as other projects go, Gabbie will be releasing her first book, Adultolescence on September 19, 2017. Published by Keywords Press, the collection of poetry is written and illustrated entirely by the Youtube star herself.

Last year, Gabbie also went on the 2016 Drop The Mic Tour alongside Andrew Lowe, Ricky Dillon, and Jack Baran. The first tour that she’s ever gone on, it kicked off on November 28, 2016 and continued until December 22, 2016.

Currently it is estimated that Gabbie Hanna has a net worth of $450,000. Drawing form everything that we’ve said above, it’s probably fair to assume that most of her fortune came from endorsements, sponsorships and ad revenue from her social media accounts (e.g. Vine, Youtube). On top of that, she presumably also brings in a decent income from her various acting gigs, such as her most recent appearance in Escape The Night (2017).

While she isn’t married, Gabbie is currently dating TV actor, Desmond Harrington who is best known for his role as Det in the hit series, Dexter. Despite their age gap of fourteen years, they seem to be very much in love.

It’s known whether or not the Vine star has dated anyone in the past.

Does Gabbie Hanna Have Any Children?

No, Gabbie Hanna does not have any children that we know of.

Where Did Gabbie Hanna Get Her Online Moniker From?

Reportedly, her username “TheGabbieShow” came from when she was younger- as a child, people around her often said Here Comes The Gabbie Show” after she walks into a room.

Did Gabbie Hanna Go to College?

Yes, Gabbie went to the University of Pittsburgh where she majored in Psychology and Communications with a minor in Economics; she eventually graduated with her bachelor’s degree.

Gabbie Hanna currently resides in Los Angeles, California; she had originally moved to LA for a job with Buzzfeed. Unfortunately, not much is known about her home as she’s never revealed any specifics about her location to the public.

We do not have any pictures of Gabbie Hanna’s house to share at this time.

What Kind of Car Does Gabbie Hanna Drive?

One of the most popular female stars on Vine up until the time of its closing, Gabbie Hanna currently has over 4.6 million subscribers on Youtube, 1.5 million likes on Facebook. 1.18 million followers on Twitter and 3.3 million fans on Instagram.

How Much Did Gabbie Hanna Make Last Year?

We do not have any information on Gabbie Hanna’s 2016 income at this time.

As mentioned earlier, Gabbie recently starred in an episode of the web-series, Escape the Night which premiered on Youtube Red. As well, her illustrated poetry book will be coming out in stores this fall on September 19, 2017.

Be sure to catch her latest Youtube videos over at @TheGabbieShow.