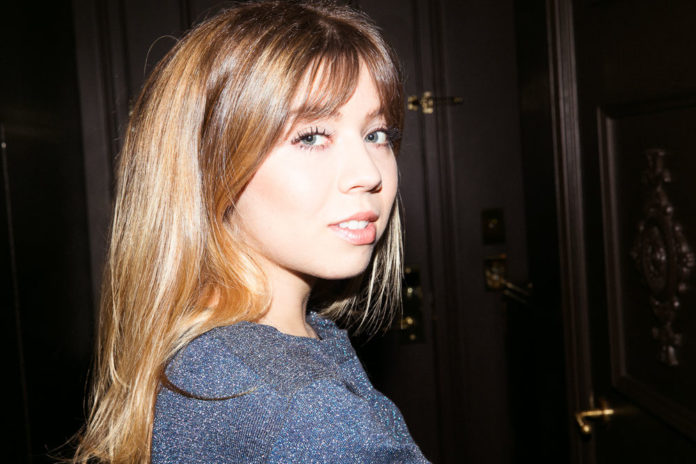 As a former child star, Jennette McCurdy is known for a lot of things. She initially broke out onto the scene on Nickelodeon, where she played Sam Puckett on the highly popular sitcom iCarly. She was so popular on the channel that she was able to reprise that role across several different programs. However, she’s obviously grown out of Nickelodeon since then, and she has gone on to bigger and more mature things. Still, McCurdy has definitely retained a lot of the fans that she acquired on Nickelodeon. These fans are known to support her on various social networks, including Snapchat, Instagram, Facebook, and Twitter.

Jennette McCurdy was born in Long Beach, California in June of 1992. Like a lot of other child stars, she got her start pretty quickly. She began her professional career in 2000 when she appeared on MADtv. Once she had that gig, she was able to land a few other smaller television roles as well. Over the years, she would appear in shows like Will & Grace, CSI: Crime Scene Investigation, Medium, Malcolm in the Middle, and Zoey 101. Jennette was showing at a very early age that she was talented. In 2005, due to her amazing performance in the television drama Strong Medicine, she was actually nominated for a Young Artist Award. She was still very young, but she showed a lot of potential. 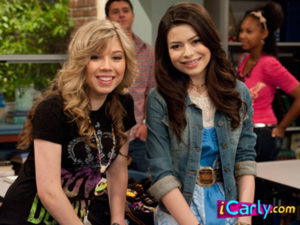 Perhaps because of this potential, McCurdy ended up winning a very large role in 2007. She would play Sam Puckett in the Nickelodeon television series iCarly, which would basically become her definitive role. She would play Sam on the show up until 2012, when iCarly officially ended. While she was working with Nickelodeon on iCarly, she leveraged her position to help her kickstart her music career a little bit. (This is especially common among Disney stars, but it sometimes happens with Nickelodeon stars as well.) In 2009, Jennette released the lead single of her debut album. Although none of this music really blew up, it did allow Jennette to spread her wings a little bit, past acting.

Once iCarly ended, though, Nickelodeon didn’t seem quite ready to say goodbye to the beloved character of Sam Puckett. In 2013, they kicked off a spin-off series called Sam & Cat. It was basically a crossover series. Sam was from iCarly and Cat was from Victorious, another very popular Nick series. I think it goes without saying that this concept went over very well. Especially when once considers all of the fame surrounding Ariana Grande at the time, Sam & Cat was built for ratings success. However, the show ended up being cancelled due to a lot of different issues. From salary disputes to the girls deciding that they wanted to move past Nick, they weren’t really able to get a second season going. 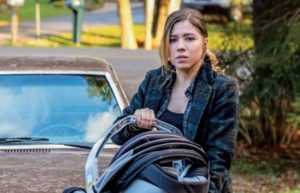 After Nickelodeon, Jennette immediately delved into bigger and better things. She started in August of 2014 through her web series What’s Next for Sarah?. What’s Next for Sarah was a comedy webseries that McCurdy wrote, starred in, and edited. It wasn’t a very elaborate production, obviously, but it was still really good for her to get out and make something on her own. In 2015, she starred in the Netflix original series Between. Between is a science fiction program that has gotten two seasons so far with the streaming service. In 2016, she starred in the horror film Pet. Although you may not see Jennette McCurdy on television as much as you used to, she’s still very much active in the entertainment industry as a whole. 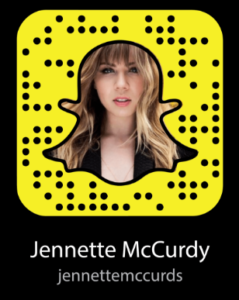 Jennette McCurdy has been on Snapchat for a pretty long time. If you’re not already following her, now would be a good time to do so. You can follow her on Snapchat by scanning her Snapcode, which I’ve included a picture of above. If you don’t want to do that, then you can simply search for her account on Snapchat by looking her up under jennettemccurds. Or, you can cut to the chase and just click the link right here to follow Jennette McCurdy on Snapchat.

Off the top of my head, I can’t really think of any major celebrity that doesn’t possess a verified, official Facebook page. Facebook is the biggest social network in the world, after all. You can find Jennette McCurdy’s official Facebook account under the username @jennettemccurdy, and you can take a look at her page by clicking the link right here.

Jennette McCurdy is also a very large presence on Twitter. She has over 6 million followers on Twitter as I write this today. You can join the ranks of those followers if you have a Twitter account, and if you choose to look her up under her handle @jennettemccurdy. I encourage you to investigate what she shares with her followers by clicking the link here.

Like a lot of other young female celebrities, Jennette McCurdy has always been pretty active on Instagram. Due to her regular use of Instagram, she’s also developed a neat following that just eclipses 7 million followers. You can find McCurdy on the platform under the username jennettemccurdy. Check out her account by clicking the link right here.

Believe it or not, it doesn’t actually seem like Jennette McCurdy has any kind of Kik account. Kik is a super popular application, and there are several celebrities out there who are known to use it. However, if Jennette has an account on Kik, she has yet to share any of its details with her fans. If you meet someone on Kik who is claiming to be this former child star, they’re probably pulling your leg.