With the rise of ‘bro-country’ and a slew of young artists looking to make a quick buck in the country music scene, sometimes there’s nothing better than traditional music that you can relate to. Alan Jackson, nearly a household name in the business, is the kind of singer you could listen to for decades and STILL find new things to appreciate in his music. With his distinctive, almost haunting voice and incredible guitar skills, even the most devout “I like anything but country” person would be hard pressed to criticise him. Who is he then, the man behind the songs, and is his rise to legendary status the product of a classical hard-work-hard-times-good-music story or just smoke and mirrors?

How Did Alan Jackson Make His Money & Wealth? 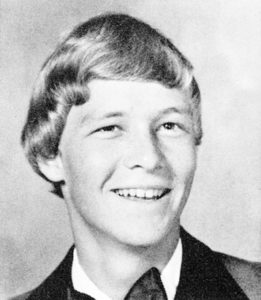 Born Alan Eugene Jackson on October 17, 1958 in Newnan, Georgia, he was the first boy born to parents Joseph and Ruth after being blessed with four daughters. Life in rural Georgia wasn’t always easy, as the family lived like true American pioneers in a small house built around his grandfather’s toolshed, and a one point in his childhood, young Alan’s bed was in a hallway. Living simply was just daily life for him, singing in the church choir and working at a shoe store at age 12, but music was never far from his mind. While Alan mostly listened to gospel music, a friend introduced him to country music and that boy was sold to it, heart and soul. He attended the local Newman High School and after graduating, married his sweetheart, Denise, and started his own band. Life was still good but Alan felt he was going nowhere and at the age of 27, he and his wife made the move to Nashville, Tennessee, the ‘Hollywood’ of country music. Working in the mailroom at The Nashville Network, Alan kept writing songs and ultimately, Denise got him connected with the late singer/star Glen Campbell, who advised him on how to start his Nashville career. By 1989 he was signed with Arista Nashville, a branch of Arista Records, and ready to hit store shelves.

In 1990, the first single off his debut album (of the same name) with Arista, ‘Here In the Real World’ hit No. 3 on the Billboard Hot Country songs. The early 90’s were an especially productive era for Alan as he released a further 4 albums (Don’t Rock the Jukebox, High Lonesome, A Lot About Livin’ (And a Little ‘Bout Love), and Who I Am), including several collaborations (co-writing) with star Randy Travis. Alan had his first greatest hits compilation in 1995 and another 3 albums before the new millennium, Everything I Love, High Mileage, and Under the Influence. As the face of country music changed, becoming more commercial and more geared towards pop audiences, Alan and fellow star George Strait were among the vocal ‘traditionalist’ camp in the genre. In 2001, his song ‘Where We You (When the World Stopped Turning)’ commemorating those lost in the 9/11 attacks became an instant hit and brought Alan to the attention of mainstream media. Tireless in his music production, Alan released a Christmas album (Let It Be Christmas) and a gospel album (Precious Memories) during the 2000’s, as well as an additional 2 studio albums, Like Red on a Rose, and Good Time (making 5 for the decade, with When Somebody Loves You, Drive, and What I Do).

It’s safe to say that the 2010’s have been Alan’s most important as an artist (even though they’re not over yet!), seeing a further 4 studio albums (Freight Train, Thirty Miles West, The Bluegrass Album, and Angels and Alcohol), not to mention a second gospel album, Precious Memories II, his own exhibit at the Country Music Hall of Fame celebrating 25 years of music, and in 2016, Legacy Recordings released Genuine: The Alan Jackson Story, a complete discography on 3 CD’s of 59 tracks, including 8 unreleased songs. With 5 major tours over his career, Alan has spent literally years on the road, both in the United States and as far abroad as Australia. His record has made him one of the most impressive country music artists of the past generation with 16 studio albums, 3 greatest hits compilations, 2 Christmas albums, 2 gospel albums. He’s sold over 80 million records, had 66 songs on the Billboard charts and has 9 albums certified multi-platinum. The boy from Georgia shot for the moon and landed in the stars. 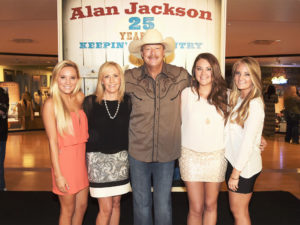 Alan Jackson is married to his high school sweetheart, Denise. The two married in 1979 and she stood by her man during the move to Nashville as he followed his dreams. One half of a couple being an artist is always stressful but the two have had a relatively smooth marriage, with the exception of a several-month separation in 1998 due to Alan’s rising career and infidelity. However, they recommitted to each other, finding solace in their Christian faith, and Denise wrote a New York Times bestselling book about life with her husband, It’s All About Him: Finding the Love of My Life. The couple has been blessed with 3 daughters, Alexandra, Mattie, and Danie, who have appeared with their mother Denise in the music video for Alan’s song Remember When, which details his happiest memories of their romance. The stereotype of the Nashville marriage is that it’s short, violent, and unhappy, but Alan and Denise have proven lasting love is out there.

What are Alan’s musical influences? 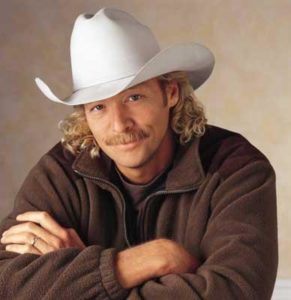 Introduced to country music with the classics, including Gene Watson, John Anderson, and Hank Williams Jr., it’s no secret that Alan is a traditionalist at heart. He’s covered many well-loved songs by country music’s greatest artists such as Merle Haggard, Don Williams, and Mel McDaniel. His sound is reminiscent of the roots of Nashville music and culture, in the days before country meant hanging out of the side of a pick-up truck or crooning cartoonish songs of hyperbolic tales of woe. A longtime fan of legend George Jones, Alan maintained a close friendship with the singer, mentioning him in several songs and when Jones sadly passed away in 2013, Alan performed at his funeral, singing Jones’ classic ‘He Stopped Loving Her Today’. With his signature twangy style, Alan conveys a lot about his childhood and life growing up in rural Georgia, from the music playing when he was a child to remaining true to soul of the genre when many artists were going pop for fame.

Has Alan won any awards? 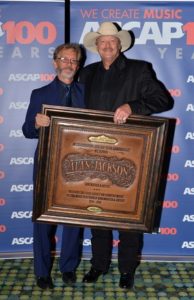 After decades in the business and a discography that must have seemed an impossible dream in the early 80’s when he first hit Nashville, Alan Jackson has proven he has the talent, savvy, and staying power to become a driving force in contemporary country music. With 562,000 followers on his official Twitter, and over 187,000 followers on his official Instagram, it’s safe to say that while he’s a traditionalist at heart, Alan’s won over the hearts of the younger country set despite his resistance to pop and ‘bro-country’. What’s next for this absolute juggernaut of Nashville? Well, it’s said that country music stars don’t go out of fashion, they just ride off into the sunset when it’s time, and it looks like Alan Jackson has a lot of song left in him before that happens.