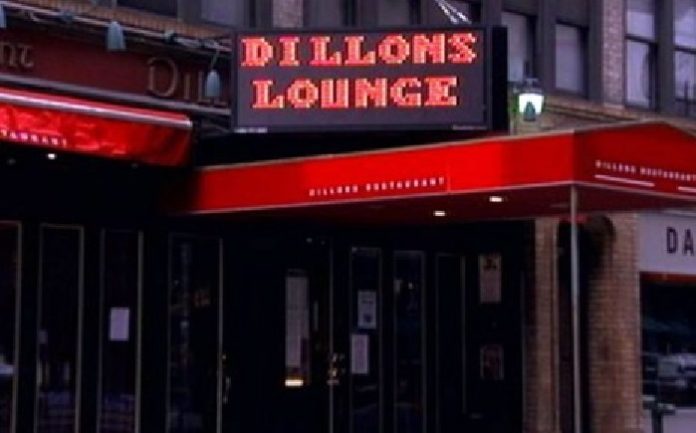 Dillons American-Irish-Indian off-broadway restaurant in Manhattan and the nightmare it was experiencing is a classic case of too many cooks spoil the broth, although in this case it was too many managers spoiling the chicken bhuna. Owner Mohammed employs an operations manager Andrew, who doesn’t have much of an operation to run, a general manager, Martin who’s generally incompetent, and a floor manager Khan. Khan is such a stranger to the restaurant that some waitresses were in the dark about his managerial status, but Khan is quick to explain that he doesn’t like working there because everything’s so ‘messed up’.

Martin is British, but it’s Andrew who has a comically dry assessment of Dillons, the operations manager finds it hard to believe the business has lasted this long and describes profitability of it as ‘lurching between catastrophe and disaster’ in a completely deadpan monotone, it’s hard not to laugh, even though he looks like he wants to run and hide. Martin explains about the menu, which he describes as ‘The best of all Worlds’ in hushed tones of reverence. There are spicy Indian dishes alongside shepherd’s pie and Hamburgers but even the waitresses can’t explain what type of restaurant Dillons is. Andrew and Martin clearly feel threatened by each others presence, there’s no clear leadership in the business and even worse the restaurant is filled not with customers, but with flies.

Owner Mohammed explains that the business is costing him $20,000 to $30,000 a month to keep going, he’s desperate for answers and claims to be prepared to do anything Gordon suggests to get his restaurant back on an even keel. But can even the scariest chef in town sort out the mess that Dillons is in before it’s too late? Read on to find out.

Gordon’s restaurant ‘London’ is just a couple of blocks away so he knows the area, but the giant electronic sign outside Dillons is too garish for him, it hides the name of the restaurant and looks ‘like a scoreboard’. After meeting the staff and various managers Gordon’s alone in the restaurant at lunchtime, and asks waitress Jenna if it’s always like this, she tells him it’s busier than usual and Martin laughs, obviously not that concerned about the lack of trade. Gordon orders some food from the numerous menus and remarks that he’s lonely as the only patron, but at least he’s got a minor swarm of flies to keep him company.

Gordon’s soon busy marvelling at his food after a quick prayer that he doesn’t get food-poisoning, in particular he’s marvelling at a chunk of something that he likens to a ‘dehydrated turd’. Once Gordon gets a clean plate for his next course, on the second try, he’s confused what meat his beef bhuna contains. Jenna thinks it’s pork but eventually the chef, who can’t speak a word of English identifies it as lamb, through Mohammed, who’s always there to translate. Finally the chef narrows it down to ‘Old lamb’, which doesn’t improve Gordon’s opinion of his professional skills. Jenna notes that Gordon didn’t seem to enjoy much of anything, and adds that that’s the way it usually goes with customers.

Finally Gordon tries the salmon from the American side of the menu. After describing it’s over-cooked appearance as ‘Like a doormat’ he summons the chef, who happens to be operations manager Andrew. Who explains, in his wonderful deadpan manner, that the chefs have trouble cooking any of the Western items on the menu. Gordon leaves Andrew to finish the salmon for himself, which to his credit he does, with Gordon long gone and only the flies for company.

Eventually Gordon gets to meet Khan on one of his infrequent visits to manage the floor at Dillon’s, and Gordon’s assessment of the number of managers too many at the restaurant doubles from one to two. Andrew explains that although ‘Everyone hates Khan’, he’s protected by Mohammed so he’s not going anywhere, Andrew’s tone is as dead as he bells of the Apocalypse ringing in the End of times as he reveals this.

That evening Martin’s general air of relaxed confidence first makes Gordon angry, then it makes him rage, then it finally drives Gordon mad. He accuses the non-managerial manager of being unconcerned about staff with nothing to do, too friendly with the waitresses, lackadaisical, and finally ‘A fake’, to which Martin hurriedly replies ‘I’m not a fake, why did you call me a fake?’ with a face like a spy who’s just had his cover blown. Martin’s lack of grip on the reality of Dillons is further exposed the following day when Gordon arrives fully kitted out in a hazmat suit with gadgets attached that make him look reminiscent of the Ghostbusters. Along with a team of professional steam cleaners Gordon and the staff give the ‘disgusting’ kitchen a deep clean, and dislodge a colony of cockroaches or two from the darkest depths.

There’s a touch of Ramsay magic in transforming the restaurant with a sparkly new classy décor and exterior during one of those industrious overnight makeovers, and there’s a new name for Dillons, now it’s the far more obviously Indian Purnima. Gordon enlists the help of celebrated New York based chef Vikas Khanna in creating a new menu of mouthwatering Indian dishes and promotes the new re-opening of Purnima with a Purnima parade through the streets of Manhattan, complete with music, colorful decorations, and dancing girls. All of which Martin seems to enjoy immensely.

The restaurant is packed for the re-launch, but Martin seems unable to get the orders right. Eventually Gordon encourages Khan to step up and look after the orders, and things run much more smoothly. Gordon then sits down with Mohammed and tells him that he should get rid of one of his managers. Martin, obviously the prime candidate then has a long heated argument with Gordon at the end of which he announces it’s his last night, he’s had enough and he’s going to quit. Gordon leaves Purnima, which is now in far better shape financially, one manager lighter and far more popular with diners. Mohammed later takes on Vikas as a consultant and Gordon’s pleased that things are running much more smoothly after his visit, but the story doesn’t end there.

Dillons Now in 2018 – The After Kitchen Nightmares Update

Although the ex-Dillons, Purnima managed to carry on for a few more years, ultimately there were clearly still big problems with the restaurant, in particular the staffing and the leadership of the place. Gordon Ramsay may have been able to completely transform the place materially, but there were bigger problems between the myriad of personalities with a stake in it’s running. Probably unsurprisingly Purnima finally closed it’s doors for good in 2009. Vikas Khanna has moved onto bigger and brighter pastures, and Andrew has made a surprising sideways move in the industry, the former manager of operations is now a Blogger, occasional Huffington Post writer and has collaborated on a cooking book with Vikas.

Martin Hyde, the former general manager of Dillons was accused of many things by Gordon during the episode, the most litigious of which I have not mentioned for obvious reasons. More than once Gordon’s criticism of Martin appeared to be personal rather than professional, it was a very fine line. Martin Hyde originally attempted to stop the episode being shown, but his lawsuit was thrown out of court in mid 2007. In 2008, after the episode had been shown Martin once again took the Kitchen Nightmares production company to court, this time he was claiming $800,000 (£500,000) for deceitful editing practices that he claimed misrepresented him, his commitment to Dillons, and ultimately left his reputation in tatters. Martin wasn’t the first person to claim that Gordon’s shows used selective editing to create a dishonest impression of someone, and he wasn’t the first to sue Gordon’s production team either. Martin’s legal battle however, ultimately came to nothing. Perhaps he wasn’t helped by his claim that he was only employed to put on events in the first place, when clearly the only large gatherings when Gordon first arrived at Dillons were a regular gathering of flies. Martin wasn’t the first to come out of a legal process against Gordon Ramsay empty handed and Kitchen Nightmare may or may not be hyped-up for drama, but there’s no flies on Gordon.