Jeffree Star started his music and modeling career on this social media platform MySpace for moving over to YouTube. He is most well-known for his androgynous appearance, and gender-bending looks. Once on YouTube, Jeffree began doing makeup tutorials which eventually led him to start his own cosmetics line. Let’s take a look at how this interesting social media influencer makes his money and wealth.

How Did Jeffree Star Make His Money & Wealth?


Jeffree was Jeffrey Lynn Steininger on November 15, 1985, in Orange County California. After his father died when he was just six years old, Jeffree was raised by his single mother. His mom was a model and frequently went out on shoots and assignments. When he was a child, Jeffree would often raid his mother’s makeup drawer. He became proficient at applying the makeup himself and actually convinced his mother to allow him to wear makeup to school when he was in junior high. He knew early on that he was not like most kids and he was only in fifth grade when he realized he was gay.

Jeffree dyed his hair pink for the first time when he was in high school, and he was selected for Best Hair in the yearbook for his now signature look. Even back then, he had a computer and a high-speed Internet connection, so he was posting photos of himself on LiveJournal, Face the Jury, and melodramatic.com – the social media of the 90’s kids. He quickly developed a following. One of his fans actually sent him an expensive camera, which he used to take higher-quality photos of himself. Jeffree was making all the right moves, and he knew a good thing when he saw it. So when Myspace came out, he quickly convinced his cult following to join him there.

Instead of only being friends with Tom, the Myspace creator that was friends with everyone who joined the platform, Jeffree began with tens of thousands of friends and followers. After graduating from high school, Jeffree ended up moving to Los Angeles. He supported himself by working at the MAC counter, where he met a lot of celebrities. He lived with a prostitute, so he ended up driving her around to her jobs, and doing makeup for celebrities and porn artists. He was inspired to get into music by controversial rocker Peaches, who he met one day after a show. He talked Tom, the MySpace creator, into converting his regular page into music page, and his songs really caught on. He was making money that way before most people had even thought to make money from the Internet, much less a social media site, was even possible.

At the time, Jeffree was frequently in the top tier of MySpace music artists, making him one of the most played unsigned artists. Eventually, he released his studio album Beauty Killer in 2009, which featured electronic and pop tracks. He had already been on a tour for his music starting in 2007. He hasn’t made a full-length album since but has released several singles and an EP. He appeared in a music video for Kesha’s Take It Off in 2010. Jeffree Star was in two different episodes of LA Ink, once in 2007 and once in 2011. He has a clothing line called Beauty Forever which launched in 2016, which is sold on his website as well as in Hot Topic Stores. His makeup line launched the same year, and quickly gained popularity. 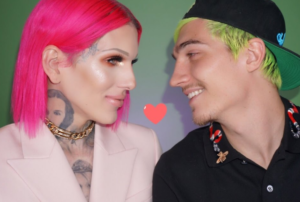 The androgynous 31 year old is currently dating 24 year old Nathan Schwandt. He previously was in a relationship with Chris Crocker of “Leave Britney Spears Alone!” fame. They went out from 2005 to 2009. After that, Jeffree briefly dated singer/songwriter Tyler Carter.

Jeffree is estimated to earn anywhere from $95.7 thousand to $1.5 million per year. This cash comes from sources such as his YouTube views, fashion line, branding deals, as well as his makeup brand.

Jeffree Star earns anywhere from $300 all the way up to $8000 per day, depending on his YouTube views and sales of his makeup and fashion line. 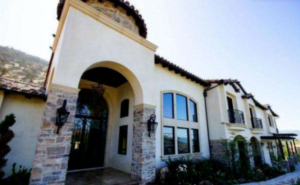 The model and make up guru currently lives in Calabasas California. He enjoys spending his money and wealth on extravagant things, so it’s no surprise the his house costs upwards of $3.6 million. Jeffree Star purchased the house in 2016, which has 7100 ft.², seven bathrooms, and six bedrooms. It’s a gorgeous open design, with marble floors and some rooms and shiny hardwood floors. The view from inside is gorgeous. The large windows show review of the California Mountains, and the backyard features a truly enviable courtyard. Naturally, since moving in, Jeffree has decorated majority of the inside in hot pink. 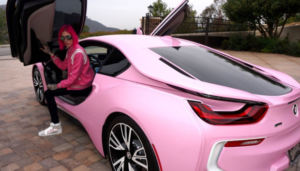 One of the luxury items that Jeffree loves to spend on is cars. His favorite appears to be a Barbie pink BMW, but Jeffree Star also drives a Lamborghini Huracan, and a white Rolls Royce Phantom. One of his pink BMW i8’s was completely totaled in a tramuatizing car accident, but he has recently gotten a pink BMW Z4 as well.

With such a big personality, it’s not surprising that Jeffree has gotten himself into quite a few controversies over the years. One of the first is the subject of his gender. While quite a few articles online refer to the makeup artist as transgender, Jeffree identifies as male and androgynous. He has said that he enjoys the freedom that affords him to express himself.

When his make-up line came out, Jeffree got into a major public feud with Kat Von D, and it seems like the two have never officially made up. In the summer of 2017, some old videos resurfaced of Jeffree saying what he himself calls racist “disgusting, vile, nasty, and embarrassing things.” In an uncommon (for him) apology video, Jeffree Star admits that he knows that the comments were not okay, and that he acknowledged that there was no way to erase the past. He insisted that the comments were not about race, but were used instead to shock and anger people. It seems like it did it’s job.

It’s expensive being a larger than life personality. Jeffree Star enjoys the luxury items that his fame and true net worth bring him. His photographs flaunt expensive items such as a $20,000 Hermes Birkin purse, $2,000 designer pink blazers, and a body covered with tattoos done by Kat Von D, whose rate starts at $200 an hour. One blog has estimated that his body art alone costs well over $100,000. Jeffree also owns four pure-bred Pomeranian dogs, which can cost upwards of $3000 per puppy. His custom cars are also pricey. The BMW i8 alone was at least $152,000, plus the cost of getting it wrapped in pink. Jeffree Star likes all designer everything, so his cost of living definitely is not cheap. Let’s hope his net worth can keep up with his lavish lifestyle.