Trippie Redd Net Worth 2018 – How Much He Makes Per Show 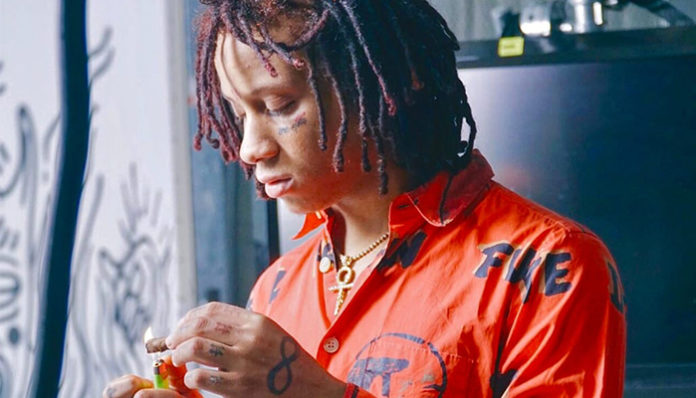 An aspiring new artist, Trippie Redd has released a number of hit singles including, Romeo and Juliet, and Love Scars/You Hurt Me. Influenced by A$AP Rocky, KISS, and Lil Wayne, his style is often compared to that of Lil Uzi Vert. In order to pursue a career in rap, he relocated to Atlanta, Georgia shortly after his high school graduation.

With a little bit of luck, the teen soon landed himself a music deal with a local label. In 2014, Trippie Redd released his first tracks, New Ferrari and Sub-Zero. Since then, he has dropped a number of other titles including Romeo & Juliet, Uh Oh, Thots!, It Takes Time, Deeply Scarred, and Blade of Woe. His debut mixtape titled, A Love Letter to You was released in May 2017.

A rapper to watch out for, the 18-year-old has amassed himself tens of thousands of fans over the past few years. If anything, he’s only proved himself to be a contender in the music scene. How successful is he now?

According to various sites, Trippie Redd currently has an estimated net worth of $300,000. Where did this amount come from? What are his most successful projects so far? Let’s take a look.

How did Trippie Redd Make His Money & Wealth? 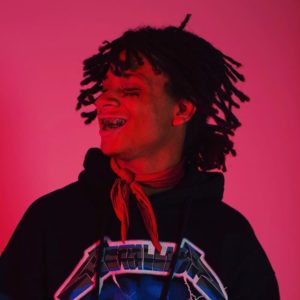 Born on June 18, 1999, in Ohio, Trippie Redd (Real Name: Chris King) grew up in the city of Canton, though he also lived in Columbus for a brief time. Due to the fact that his father was in prison at the time of his birth, he was raised single handedly by his mother. Ultimately, it was the jams that she played in the house that first sparked Redd’s interest in music. As a child, he often listened to the works of Marilyn Manson, Gucci Mane, T-Pain, Lil Wayne, and KISS.

Naturally inclined, Redd learnt how to sing simply by listening to others- growing up, he was especially fond of Partynextdoor and The Weeknd. Casually honing his skills over the next few years, he eventually wrote his first song, Manu Ginobli by the time he was fourteen years old. Despite being a simple freestyle, the track allegedly received upwards of 20,000 hits after being uploaded onto Soundcloud.

With time, he eventually got into rap, after being inspired by the work of his older brother who performed under the name of Dirty Redd. Tragically, the rapper later passed away in a car accident. Ultimately it was after the incident that the teen decided to pursue a career in music- in order to carry out his brother’s dream. Working together with his cousin Nigel, he soon recorded his first few songs, including New Ferrari, and Sub-Zero (though they’ve since been deleted from the internet).

As a teen, he was a student at a local high school in Canton, Ohio. Self described as a “loner”, he is said to have achieved a 4.0 GPA, despite having been affiliated with the Bloods street gang. Following his graduation, he relocated to Atlanta, Georgia, where he befriended two rappers, Kodie Shane and Lil Wop. With a little bit of luck, he was eventually offered a record deal with Strainge Entertainment, a label owned by Lucian grange’s son.

On August 26, 2016, the rapper dropped his first project titled, Awakening my Innerbeast. Produced by Solo Mitch, PierreBourne, and osBreeze, it boasted five tracks including Green Thumbs, Help!, Wrist Work, Bitch Go, and No Way, two of which featured guest appearances from A1Billionaire and Kodie Shane. Made available for streaming online, it has since racked up well over a million hits on Soundcloud.

Within a few months, Redd had returned with a new project titled, Beastmode. Produced almost entirely by Pierre Bourne, the EP boasted yet another five tracks: Heartbreak-14, Too Late, Young Wild Boys, 1400 Gang/Qs & Ps, and Solar Flare. Comparable to his initial effort, the album effectively raised his profile in the underground music scene. The most popular song in the extended play, 1400 Gang/Qs & Ps has since been played over 2.2 million times on his official Soundcloud account.

His third EP, Rock the World Trippie was released on November 13, 2016. A seven-track project, it came with the titles, Gave Her Soul Away, Dead or Alive, The New Jay Z, No Time High Steez, Low Life/Rockstar Pt 2, Lone Warewolf (Enemies), and It’s OK, many of which featured guest appearances from artists such as I’m Just Chilling Baby, T-Wayne, Elliott Trent, and Jerome Milly. To date, the playlist has been played well over a million times online.

Starting the new year off with a bang, the teen dropped his next EP, White Room Project on January 18, 2017. Produced by Eliott Trent, and 808-H, seen new tracks were introduced with the release including Trap Star, Hurt to the Bone, Love Scars/You Hurt Me, Triple Double, Long Way from Mars, War On, and Purple Vibes, the last of which featured TTOKT. Out of the playlist, Love Scar/You Hurt Me remains the most popular, having already been streamed over 17 million times.

Then on May 12, 2017, Redd released his first studio album, A Love Letter To You. Considerably longer than his earlier efforts, it boasted twelve tracks, a number of which were collaborations with other acts such as Famous Dex, UnoTheActivist, Lil Tracy, Black Jesus, ad Rocket Da Goon. Produced by Pierre Bourne whom he’s worked with previously, the tape gave rise to twelve new songs including Can You Rap Like Me?, Never Ever Land, Blade of Woe, Deeply Scarred, It Takes Time, and Stoves on 14th.

Praised by both fans and critics, the album effectively brought Redd into the limelight. On Datpiff alone, it has racked up over 89,000 plays.

Later that summer, the rapper surprised fans with a new two-song project titled, A Love Letter You’ll Never Get. Teased an hour before its release on Instagram, the mini EP contained two tracks, I Know How to Self Destruct, and Woah Woah Woah/Crash Bandicoot and Chill, the latter of which featured guest vocals from Bali Baby. On Soundcloud, the two tracks have received well over 4 million streams combined as of October 2017.

Most recently, it was announced that he will be dropping  his second album, A Love Letter to You 2 on October 6, 2017. A direct sequel to A Love Letter to You, the EP will contain ten tracks including I Know How to Self Destruct, and Woah Woah Woah/Crash Bandicoot and Chill, the two songs from his surprise project. Featuring guest appearances from SmokePurppp, Cris Brown, Bali Baby, Forever Anti Pop, and Rich the Kid, it will also include the tracks, Overdosed/Focused, Lost My Mind, Bust Down/Love Scars 3, In Too Deep, and Don’t Leave Me By Myself/Let Down.

In addition to the above projects, the Canton rapper has also dropped a number of singles over the past couple of years including Romeo & Juliet, Poles1469, Bust Down/Love Scars 3, Limitless, Stoves on 14th, Love and Drugs, and In Too Deep.

Perhaps one of his most popular tracks is that of Fuck Love, a collaboration that he did with XXXTentacion. Released this past summer, the official audio has already been viewed over 8.4 million times on Youtube.

Naturally, most of Trippie Redd’s earnings have come from his music. Having said that, that’s not the entire picture- for one thing, he also makes a decent amount from putting on shows and whatnot throughout the year. For instance this past August, Redd performed a handful of shows at various venues in Los Angeles and Miami. At this time, Trippie Redd does not have any upcoming concerts planned- but stay tuned!

Reiterating what’s been said at the top, the 18-year-old rapper currently has an estimated net worth of $300,000. Considering his young age however, he still has plenty of room left for growth! Assuming that Redd continues to release new albums (which it looks like he is), his presence in the hip hop scene will only grow further- with that, it’s probably safe to assume that his earnings will also see an increase.

No, he is not married. While not much is known about the rapper’s private life, it’s assumed that he is currently in a relationship- as he’s been spotted with a girl a handful of times on Snapchat. Having said that, this is all speculation.

At this point in time, we do not have any information on his prior relationships.

Does Trippie Redd Have Any Children?

No, the Campton rapper does not have any children that we know of.

Did Trippie Redd Go to College?

Despite having been a 4.0 GPA student in high school, the rapper has not gone to college. For now, it’s unclear whether or not he has any plans on continuing his education in the future. One thing’s for sure however, he’s been putting everything into his burgeoning rap career.

Where Did Trippie Redd Get His Stage Name From?

In his early days, the rapper went by the name of “Lil 14” as he grew up on 14th Street in Canton, Ohio. It wasn’t until later on that he adopted his current moniker, Trippie Redd.

For now, he has not yet revealed the meaning behind his stage name. His birth name is Chris King.

According to a comment left by the artist himself on Genius.com, Red currently resides in his hometown of Canton, Ohio with his grandmother. Unfortunately, that’s about all we know regarding his abode- no further details have ever been released to the public.

We do not have any pictures of Trippie Redd’s house to share at this time.

What Kind of Car Does Trippie Redd Drive?

Unfortunately, we do not have any information on Trippie Redd’s vehicle at this time.

An established teen, Trippie Redd has successfully made himself known over the past few years, ever since he first involved with the rap game in 2013. Within just two years, the rapper has managed to release over half a dozen projects including Awakening my InnerBeast, Beast Mode, Rock the World Trippie, White Room Project, and A Love Letter to You. As mentioned earlier, he will be coming out with his second album, A Love Letter to You 2 later this month.

How Much Did Trippie Redd Make Last Year?

The rapper is currently preparing to release his second album, A Love Letter to You 2, which has a release date of October 6, 2017.