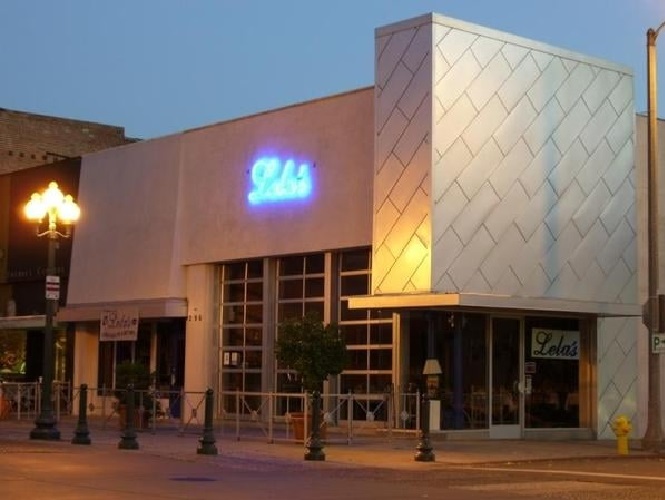 Lela’s in Pomona, California was a fine-dining establishment with some serious problems when Gordon Ramsay visited it in Season one of Kitchen Nightmares back in 2007. Owner Lela Guillen had pumped her life savings and retirement fund into the business and it had only been open for eight months, but already she was losing money day after day and now there was nothing left, she needed the help of Gordon to turn her nightmare back into a dream.

Lela’s boasts an exciting menu and an executive chef, and there’s a buzz about the place, but it isn’t a good kind of buzz. The restaurant is situated downtown, the locals prefer to eat somewhere less expensive and as a result trade is slow, dreadfully slow. Executive chef Ricky is ‘Straight out of the hood’ so we’re told and when he and waitress Tabitha interact it does resemble some kind of gang warfare. The two co-workers can’t communicate without arguing and the buzz about Lela’s comes in the form of prep chef Buzz, or Buzzard to give him his full nickname. Buzzard is perpetually eating in the kitchen, he’s known for it, but Buzzard still looks like he could do with a good meal. Maybe Buzzard just has a really high metabolism, or he expends too many calories stopping Tabitha and Ricky from fighting when things get too heated. Either way Lela’s is at a make or break point, and Gordon’s ready to tackle the situation. But has the wrinkle-foreheaded King of the kitchen bitten off more than he can chew this time? Read on to find out.

Downtown Pamona is quiet, Gordon thinks it’s like a ‘Ghost town’ when he arrives and he describes Lela’s as ‘Looking derelict’ due to the lack of any customers, but he doesn’t criticize the look of the place for once, Lela’s is clean and well-maintained. The Menu is not so pleasing for the angry one as it’s littered with spelling errors, and when he finally establishes what it is that’s available to order he’s surprised to learn from an ever-increasingly flustered Tabitha that there’s a lot of items that aren’t available, even though they are on the menu, usually spelled incorrectly.

Eventually Gordon finds a dish that is available, but his fresh tomato soup is canned, and he knows it. ‘I though this was fine dining?’ he asks Tabitha, ‘So did I’ she replies. When Gordon gets his nachos he asks about the shouting he can hear, and then learns it’s the executive chef Ricky, ‘An executive chef that can’t make tomato soup?’, he says as if he’s just discovered an unknown species living under a rock. Gordon’s advanced palate detects the nachos are a day old, and he moves on to his rack of lamb with a chocolate mint sauce. It arrives so quickly that Gordon is pleasantly surprised, but then he notices that there’s more bone than lamb on his rack of lamb and the wrinkles quickly reappear on his forehead. After ordering dessert, still hungry and beginning to rant about the lack of fresh food on the menu, Gordon’s forehead resembles a roadmap.

After his lunch, or lack of it, Gordon and Ricky go head-to-head in the kitchen. Ricky’s not going to take any abuse from Gordon, and defends the lamb that was mostly bone. ‘No-one else complained about it’ he offers, ‘There was no-one else here’ replies Gordon. Gordon can’t believe an executive chef would rely so much on frozen food and suggests Ricky’s lazy, who’s left explaining that he and Gordon are going to be ‘Butting heads’ real soon. Gordon returns the following day for an inspection of Lela’s kitchen. The place looks nice and bright but soon Gordon’s digging out a few erroneous items and declaring them to be something that we can’t hear through all the bleeping, his facial expressions clearly indicate that we should be glad that smelly-vision isn’t a thing. The kitchen staff are given instructions to clean everything along with big buckets of soapy water, and even the waitresses are given the task of washing down every surface in the dining room.

With everyone in action Gordon takes a trip into the neighborhood to see what the area’s like. He quickly discovers the Pamona artists colony is young, vibrant and diverse, and also not really a fine-dining type of area. Most of the locals he meets are young, and usually eating on the type of budget that doesn’t allow for $27 racks of lamb with chocolate mint sauce at lunchtime, instead they’re usually hitting the local pizza place or a Mexican restaurant. Gordon returns to the restaurant, where he’s impressed with the new level of cleanliness, but there’s a surprise in store for one of the staff, and it isn’t anywhere near as pleasant.

That night a sudden influx of theater-goers sees the restaurant packed for once. The staff struggle to cope, many items are off the menu causing fireworks between Ricky and Tabitha that would be worthy of any centennial celebration. Buzzard buzzes off early and Gordon finds him down the street, with his ‘bag of goodies’. A few bags of assorted foodstuffs that were ‘Ordered but not used’ according to Buzzard, and a few bottles of wine. He and Gordon return to the restaurant where Lela sees what Buzz was taking. The upshot of the resulting confrontation is that Gordon strongly suggests to Lela that she should fire Buzzard, advice that she reluctantly follows the following day when he returns to work.

Gordon conducts a blindfolded taste test next with Ricky and sous chef Lex, Ricky misidentifies chicken as beef and Lex passes with flying colors. The Kitchen Nightmares team perform the customary makeover of the already fairly tasteful and sparkling retaurant, the improvement is slight but noticable but the staff seem very impressed anyway. Gordon develops a new menu more in keeping the the locals budget. His new ‘Casual’ focus sees the birth of majestic sounding creations like ‘Lela’s famous Burger’and ‘The Pomona Salad’. Gordon drums up business for the re-launch with a trip to give away free samples of that hopefully soon-to-be famous burger, and as his success in the blindfolded taste taste has made Lex so hungry for success, Gordon suggests he and Ricky swap places for the night.

On the evening of the re-launch the place is packed, even the mayor is there thanks to Gordon’s presence. Ricky isn’t happy that Gordon has made Lex head chef for a day, but it isn’t long before Gordon is regretting the decision too. Lex’s inexperience begins to show and he’s left with a kitchen full of orders and a restaurant full of customers, but no food leaving his new domain. Lex falls to pieces quickly and bolts off into the night, Gordon chases him down like a genocidal safari hunter with his eye on the last dodo, but Lex manages to escape in his car before Gordon can bring him back to insanity. By now a frustrated Ricky is more than ready to save the day, and he does with much confident cooking of dishes and sorting of Lex’s muddled orders,

Overall the re-launch is a success, Gordon’s praise for Ricky’s new enthusiasm for his role and his ability in a crisis is effusive. Lex returns on the promise he can guarantee it’s only as a sous chef and the place has a whole new positive and professional feel about it. There’s no more Buzz about the place and it’s a lot more profitable, but the good news for Lela Guillen didn’t last very long.

Lela’s Now in 2018 – The After Kitchen Nightmares Update

Lela’s was in a dire financial situation by the time filming took place in mid 2007, and by the time the episode was aired in November of that year, it’s heavily in debt owner was forced to give up on her dream of making it a success. It’s sad that Lela, who if she had any fault it was only that she was far too kind and understanding to run a restaurant herself, was left with nothing after her stressful business struggles. Her failure to properly assess the local demand for fine-dining had left her in a quandary that no amount of executive chefs or freshly-pressed linen tablecloths were ever going to solve by the time Ramsay came along.

Tabitha wasn’t sorry that Buzzard was fired, ‘He won’t be buzzing around here no more’ she observed without pity at the time, but the sacking of the prep chef drew more than a few irritated eyebrows disappointed that Kitchen Nightmares saw fit to film and televise the firing of a man for entertainment purposes. It’s true that the program gave the impression that Buzzard was leaving with three full bottles of wine, but upon closer inspection the bottles that were leaving with Buzzard were already opened and almost empty, and since the program was aired Buzzard has defended himself by saying it was only dregs of wine, suggesting that Kitchen Nightmares misrepresented the whole thing. It’s not an uncommon accusation against the producers, and in the case of Buzz it’s true that they did give a distorted view of the incident with the wine.

The main success story that came from Lela’s was Ricky Brewer, the executive chef. Ricky’s enthusiasm and perhaps that not un-Ramsay-like personality that wasn’t going to take any bleeps saw him move on shortly afterwards to The Corner Butcher Shop in La Verne, where his well-received prime cuts of beef and fresh salmon were a big hit, even being featured in local news site ‘Laverne Online’. He was later employed as an executive chef at the Hollywood Park Casino.