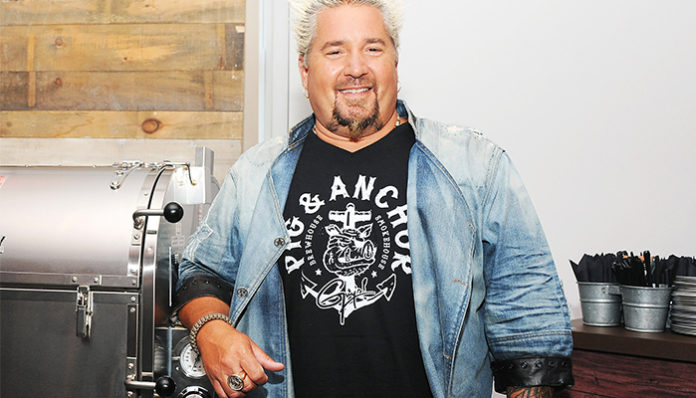 A well-known restauranteur, Guy Fieri owns a number of restaurants across the country. Raised in California, he developed an interest in cooking as a teen, during a foreign exchange trip to France. Wanting to learn more about the culinary arts, he later worked at a restaurant upon his return to the United States. Over time, he eventually became the district manager of Louise’s Trattoria. Taking his passion to the next level, he opened up his first restaurant, “California Pasta Grill” in Santa Rosa, California in 1996 with business partner, Steve Gruber. Since then, four additional locations have opened across the US.

Many years later, Fieri came into the public eye after winning the second season of the CBS show, The Next Food Network Star. As the champion of the competition, he was given his own six-episode cooking show; Guy’s Big Bite later premiered on the Food Network on June 25, 2006. Popular among audiences, the series continues to air on television to this day. Continuing to make himself known on the small screen, he eventually received a second series titled, Diners, Drive-ins and Dives in April 2007. Hosted by the restaurateur himself, it features him traveling and visiting various eateries in the country.

From there, he began co-hosting the culinary show, Ultimate Recipe Showdown in 2008, alongside Marc Summers. After three years, his next series, Guy Off the Hook premiered on the Food Network. Similar to the likes of Emeril Live and Paula’s Party, each episode is recorded in front of a student audience with whom he engages with on a regular basis. Since then, Fieri has appeared in several other programmings including Dinner: Impossible, The Best Thing I Ever Ate, and Ace of Cakes. In 2009, he also served as the host of Minute to Win It, a game show that aired on NBC.

What has Guy Fieri been up to recently? As before, he has been heavily involved with television over the past couple of years- for instance, he starred in Guy & Hunter’s European Vacation and Warriors in 2016. So far in 2017, he has been busy with the shows, Guy’s Family Road Trip, and Super Southern Eats. Currently, he is also hosting the game show, Guy’s Grocery Games which has been on the air since 2013. Outside of reality TV, he’s also acted on a few occasions. Just last year, he played the part of Longtail in the fantasy drama, Warriors (2016). In addition to that, he’s also taken part in the series, Phineas and Ferb, and I Get That a Lot.

Guy Fieri rose to fame by appearing in multiple shows on the Food Network. His bleach blonde hair and overall appearance make him a hard chef to forget.

He is currently 49 years old.

Guy Fieri was born in the great city of Columbus, Ohio. Growing up, he was raised in the city of Ferndale in rural California.

He is of Italian descent

Is Guy Fieri in a Relationship?

Guy Fieri has been married to his wife, Lori since 1995- the two had tied the knot when he was just 25 years old.

He has a sister named Morgan Fieri

Guy Fieri does not have any brothers that we know of

Guy Fieri has two sons with his wife, Lori- Ryder and Hunter Fieri.

Though it’s unclear where Fieri had gone to high school, he had taken a trip to France as part of a foreign exchange trip during his teens. Ultimately it was then that he developed an interest in cooking and food.

Did Guy Fieri Go to College

After completing high school, he worked at a restaurant for a period before moving to Los Vegas for college. A student at the University of Nevada, he eventually obtained a Bachelor’s degree in Hotel Management.

At this time, we do not have any details on Guy Fieri’s salary.

In his free time, he enjoys riding his dirt bike, snowboarding and going to rock concerts

He is a big fan of collard greens, which he tends to make with smoked turkey instead of ham

Born on January 22, he is an Aquarius

As far as we know, Guy Fieri is not active on Youtube.

Guy Fieri does not have a Snapchat username at this time