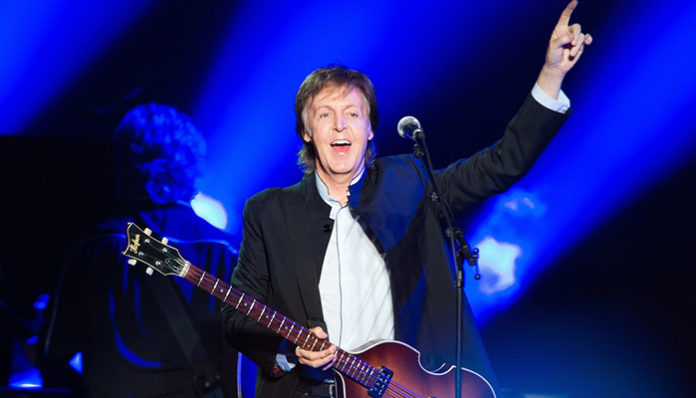 One of the most successful performers of all time, Paul McCartney rose to fame as a member of the Beatles during the 60’s. The son of a musician, he took up singing as a young teen, not long after receiving his first acoustic guitar. As one thing led to another, he eventually joined a band in the late 50’s, which by 1960 had evolved into the Beatles. A few years later, the group had issued their first studio album titled, Please Please Me. Some of their other early records include, With the Beatles, Introducing…The Beatles, Meet the Beatles!, and Twist and Shout.

By the mid 60’s, Paul and the group had released a number of smash hits- for instance, Love Me Do, I Saw Her Standing There, Please Please Me, and There’s a Place, all of which received RIAA accreditation in the United States. From there, the Beatles continued to drop new albums including, Yesterday and Today, The White Album, Yellow Submarine, and Abbey Road. The twelfth and final record, Let it Be was released on May 8, 1970. Critically acclaimed, it gave rise to two classics- Let it Be, and The Long and Winding Road/ For You Blue.

In addition to his work with the Beatles, McCartney was also established as a solo artist. Shortly after the group’s disbandment, he issued his debut album, McCartney in 1970. Certified double platinum, its sequel, McCartney II was later released ten years later in 1980. During that decade, he came out with a number of collaborative projects such as Ram (with Linda McCartney), and Band on the Run (with Wings). Continuing with his solo career in the 80’s, he released several records over the next years including, Tug of War, Pipes of Peace, and Give My Regards to Broad Street.

Since then, McCartney has remained active on the music scene- with a few scattered releases over the past few years. His most recent album titled, New came out in October 2013. What has the singer been up to lately? Like most celebrity artists, he has been on tour for the past few months. From April until now, he has performed at over 30 different venues across the globe, from Japan to Brazil. If you’d like to see him live, he still has many shows left for December- be sure to visit his official website for more details!

As far as other recent appearances, he made a cameo in the film, Pirates of the Caribbean: Dead Men Tell No Tales this May.

Paul McCartney rose to fame in the 60’s as a member of the Beatles- one of the most influential and popular groups in the history of pop music. Following their disbandment, he launched a successful solo career.

He is currently 72 years old

Paul McCartney was born in Liverpool, England, where he went to school. Later as a young teen, he and his family lived in the suburbs of Allerton.

He is of Irish, Manx, English, Welsh and Scottish descent

Is Paul McCartney in a Relationship?

Paul McCartney has been married to his wife, Nancy Shevell since 2011. After five years of dating, they tied the knot during an intimate ceremony in London.

Prior to his current relationship, he was married to a former model, Heather Mills. After four years of marriage, they separated in 2006- their divorce was later finalized in 2008.

Previous to that, he was married to Linda Eastman, whom he performed with under the name, Wings. In 1998, she passed away from breast cancer at the age of 56.

In terms of girlfriends, he had also been romantically involved with Jane Asher and Dot Rhone in the late 50’s and early 60’s.

He has a younger brother named Michael, who is two years his junior.

Paul McCartney has five children including James, Stella, and Mary who are from his first marriage to Linda (including Heather who he’d legally adopted). Later, he had a fifth child with Heather Mills named Beatrice Milly in 2003.

As a teen, he went to the Liverpool Institute, a grammar school located in the port city of Liverpool.

Did Paul McCartney Go to College

No, Paul McCartney did not go to college.

At this time, we do not have any details on Paul McCartney’s salary.

Over the years, he has accrued an impressive collection of books and guitar picks

Mashed potatoes with diced onions and eggs, fried eggs over easy, and tomatoes and mayonnaise sandwiches

He likes watching basketball, track and field and American football on TV

At this time, Paul McCartney is not on Snapchat (though he has expressed interest in joining!)