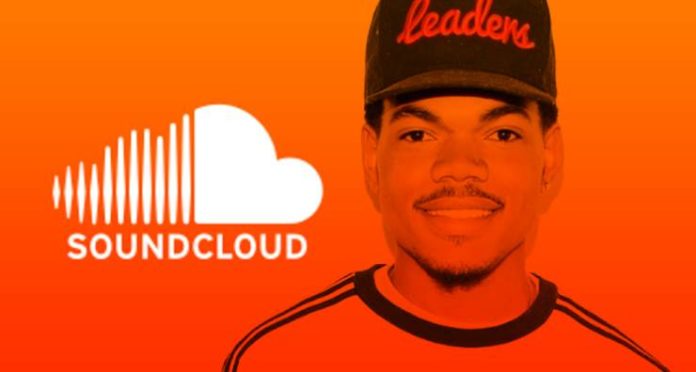 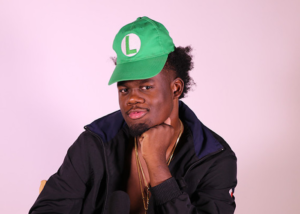 Standing out in the expansive world of Soundcloud rap is a difficult task. Soundcloud rappers such as Ugly God are becoming known for their bizarre lyrics and appeal to internet culture. Although his personality and music differ significantly from most other rappers, Ugly God has somehow secured a cult following nonetheless. While he has shamelessly called his lyrics “garbage” in multiple interviews, his musical ability is quite impressive. Ugly God was chosen as one of XXL Magazine’s Freshman Class in June 2017

After posting his debut single “I Beat My Meat” on YouTube in 2014 Ugly God enjoyed a brief spark of popularity. The song’s odd lyrics combined with a unique beat built on top of Apple’s famous marimba ringtone, resulted it spreading rapidly. Even after Ugly God removed the song from YouTube due to his school expressing disapproval, the song was reuploaded by fans. On March 16th, 2016 Ugly God’s popularity reached brand new heights after he released the song “Water”. It peaked at #80 on the Billboard Hot 100 chart. He later released the mixtape “The Booty Tape” in August 2017. 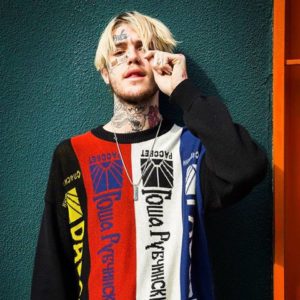 Producer, singer and rapper Lil Peep’s music and lyrics are just as striking his intimidating appearance. The 20 year old Long Beach rapper is decorated head to toe in tattoos. His production style blends 90’s emo and grunge with modern hip-hop and trap beats. Lil Peep’s lyrics often have themes of angst, addiction, and depression. He cites acts from Kurt Cobain to Gucci Mane as influences.

The singles “Gym Class”, “White Tee”, and “Girls” released in 2016 and 2017 have all been played millions of times on Soundcloud. He has also collaborated with rapper Lil Tracy on the singles “‘Witchblades”, “Backseat”. and “White Wine” In June 2017, Lil Peep announced his debut album Come Over When You’re Sober. He collaborated a fourth time with Lil Tracy on the single “Awful Things”. While he is still very successful in the United States, Lil Peep has a massive Russian fan base. As a result, many of his music videos have Russian subtitles. 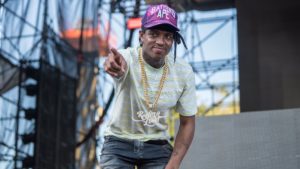 The stage name alone of Stokeley Clevon Goulbourne, aka Ski Mask The Slump God is enough to make one do a double take. Ski Mask is known for forming the rap group with XXXTentacion in 2015, whom he has collaborated with on singles including “Take a Step Back”, “Babywipe”, and “Catch Me Outside”. Although he was originally known primarily for being a collaborator with XXXTentacion, his witty verses and flow quickly resulted in a fanbase forming around him. Even after a few minor legal controversies, the gossip made him even more popular.

Ski Mask The Slump God is one of the most popular rappers on Soundcloud. His music averages 1 million players per week. His success resulted in a record deal with Universal Music Group, under whom he released his debut album YouWillRegret. Ski Mask and his friend/collaborator XXXTentacion are considered the most influential soundcloud rappers. 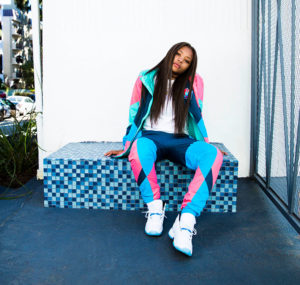 Young talent Kodie Shane is one of many rappers associated with fellow Soundcloud talent Lil Yatchty. She embarked on her own career after being featured in the Lil Yatchty’s Sailing Crew song “All In” in August 2016. Shane made a name for herself with the song “Sad” featuring Lil Yachty later that year in December. “Sad” currently has 6.8 million views, and the song has definitely made those viewers happy. She also collaborated again with Lil Yatchty and Lil Uzi Vert on “Hold Up”.

In 2017, Kodie Shane released the EP Back From The Future. Songs from the album have as much as 100K plays on soundcloud, although her YouTube following is significantly larger. Her first release “Little Rocket” has over 2 million total plays on Soundcloud. 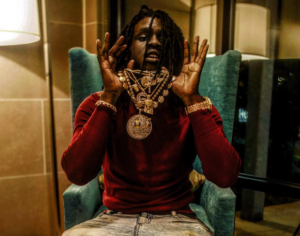 While most rappers tend to primarily focus on the musical aspect of their field, Chief Keef (real name Keith Cozart) is a jack of all trades. From a young age, he dedicated his heart and soul to music. His early mixtape The Glory Road and Band as well as its accompanying (self-produced!) music videos ultimately lead to multiple record labels duking it out to sign the young talent. After his song “I Don’t Like” from 2012’s Finally Rich was remixed by Kanye West, Chief Keith became an overnight sensation.

Since the release of Finally Rich, Chief Keef has released the albums Nobody and Bang 3. He also released the mixtapes Bang 3 Part One and Bang 3 Part 2. Keef is the CEO of GBE Records, to which he is signed to along with Interscope. Songs on his Soundcloud account get as many as 40 million plays. 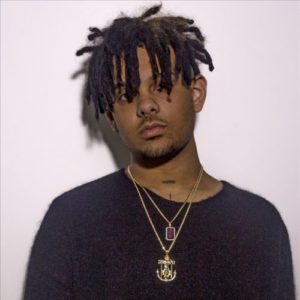 Young talent Smokeprurpp (real name Omar Pineiro, also known as Lil Purp) began producing music when he was in high school. He described himself a good student and not a troublemaker, and states he picked up music out of boredom. He decided to become a rapper after he was unable to sell pre-produced instrumentals, as he realized vocalists were in short supply.

In 2016, Smokepurpp released the mixtape Up Now, F*** Next. Although it was only mildly successful, he met several future collaborators through it. Smokepurpp became a hit on SoundCloud after posting the single “Audi” in May 2017. The song has accumulated nearly 30 million plays since it’s original upload date. He later signed to Interscope Records for the release of the mixtape Deadstar. 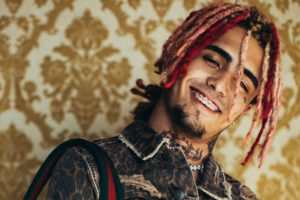 One of the youngest successful Soundcloud rappers, 17 year old Gazzy Garcia has been already created multiple hits. After encouragement from his friend Smokepurpp, he began to record his freestyling as well as produce his own music. The duo have toured and collaborated together since 2016. In his first year of rapping, Lil released the singles “Gucci Gang”, “ELEMENTARY”, “D Rose”, and “Broke My Wrist” – all of which have accumulated millions of views on soundcloud.

Lil Pump’s previously released singles were included on his self-titled mixtape in October. Many songs on the album were co-produced by Smokepurpp. Other guest features included Chief Keef, 2 Chainz, Rick Ross, Gucci Mane, and Lil Yachty. Lil Pump album has over 100 million plays on Soundcloud. 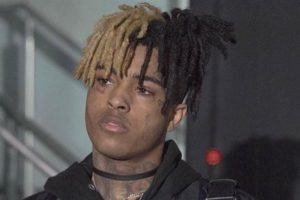 Although “SoundCloud Rap” has existed long before Jahseh Dwayne Onfroy, known as XXXTentacion began rapping, he is often called “The Pioneer of SoundCloud Rap”. The nature of his music has always been controversial. His ultra-controversial music video for the single “Look At Me” touched on many hot topics, but also secured a large fanbase for the young rapper. Numerous legal battles and public spats with fans have made him even more popular.

After the release of the album 17 and the mixtape Revenge in 2017, XXXTentacion began to look for a label. He signed to Caroline records on October 19th, 2017. Less than a week later, the rapper announced he would not be releasing new music anytime soon due to hate and backlash. However, he is still signed to Capitol Records. 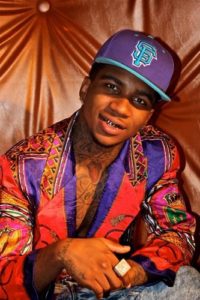 Also known as “The Based God”, Lil B was one of the first rappers to build a following almost exclusively by promoting himself on social media. He coined the term “based” to describe the attitude of positivity and tolerance that influences his music and overall life outlook. The music and philosophy of Lil B continues to influence today’s generations of Soundcloud Rappers, even if he is less popular than he used to be.

Lil B’s work is influenced by almost every genre under the sun, and his lyrical content ranges from the satirical to the sentimental. The 2010 released Rain in English is Lil B’s only official studio album. The remainder of his releases before and after have been mostly digital. From 2009 to 2015, Lil B released as many as 10 mixtapes per year. After a two year hiatus he self-released the mixtape Black Ken in 2017. 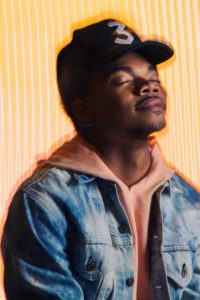 Becoming a successful musician is difficult enough, but mixing that with entrepreneurship is a monumental task. But Chancellor Jonathan Bennett, aka Chance the Rapper has paved the way for Soundcloud Rappers and independent musicians of all genres with his insistence on remaining independent. His 2015 album Coloring Book won three grammy awards – the most ever for any independent artist.

Not only has Chance the Rapper been incredibly successful without ever signing to a label, he has helped Soundcloud stay afloat. After the site announced massive was close to bankruptcy in September 2017, Chance the Rapper tweeted the site was here to stay. He also used his influence to rally a massive amount of support.