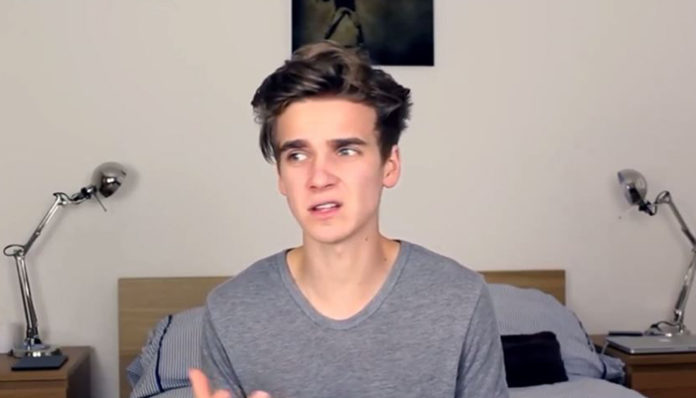 Based in England, Joe Sugg has been posting videos to Youtube since 2011. Incredibly popular with millions of fans, he has also appeared in films such as Joe and Caspar Hit the Road, and Joe & Casper Hit the Road USA. To learn more about the twenty-something, be sure to keep on reading.

Joe Sugg rose to fame on Youtube in the early 2010’s for his pranks, challenges, and impression videos. Since then, he has launched two additional channels, one for video gaming and another for his vlogs. Like many internet celebrities, his online popularity has also led to other opportunities in television and film.

Joe Sugg was born and raised in Wiltshire, England. Currently, he resides in London (according to his Twitter account).

His current weight is around 137 pounds

His current weight is around 62 kg

At this time, Joe Sugg’s body measurements are unavailable

Is Joe Sugg in a Relationship?

Most recently, Joe Sugg dated singer Perrie Edwards. According to reports, the two had met online where they almost instantly clicked.

At this time, we do not have any information on Joe Sugg’s previous relationships.

Tracey Sugg (his parents have been featured in his Youtube videos)

Graham Sugg (his parents have been featured in his Youtube videos)

She has an older sister named Zoe Sugg (aka Zoella) who is also incredibly popular on Youtube. She currently has over 12 million followers on her channel.

As far as we know, Joe Sugg does not have any brothers.

The Youtube star does not have any children that we know of.

At this time, it’s unclear which high school Joe Sugg went to as a student.

As far as we know, he has not pursued higher education. With the amount that he’s raking in from his Youtube channels, however, that’s more than understandable!

According to various sites, the twenty-something makes well over $1,000 a day from his three Youtube channels combined (e.g. ad revenue). This works out to be approximately $400,000 a year.

He enjoys blogging in his free time, which he uploads to his channel

Born on September 8, he is a Virgo

Hailing from England, Joe Sugg launched his primary Youtube channel, ThatcherJoe in 2011. Posting a variety of content from impressions to pranks, his following quickly passed the one million mark. Since his rise to fame, he has created two additional accounts- one for games and another for vlogs. For his work, he received a Radio 1 Teen Choice Award for Best British Blogger in 2015. As of 2017, he has accumulated over 1 billion views across his three channels. As expected from such an internet star, he also has a presence on social media platforms such as Twitter, Facebook, and Instagram.

Aside from his Youtube endeavors, he has also dabbled in acting. In 2015, he made a brief cameo in the animated film, The SpongeBob Movie: Sponge Out of Water. Since then, he has also appeared in two direct-to-DVD movies, Joe and Caspar Hit the Road, and Joe & Caspar Hit the Road USA. What else has he been up to? On top of being a Youtuber and actor, Sugg is also the author of a graphic novel series- the first book, Username: Evie was released in 2015. Following a sequel in 2016, he published the third and final novel, Username: Uprising in September 2017.