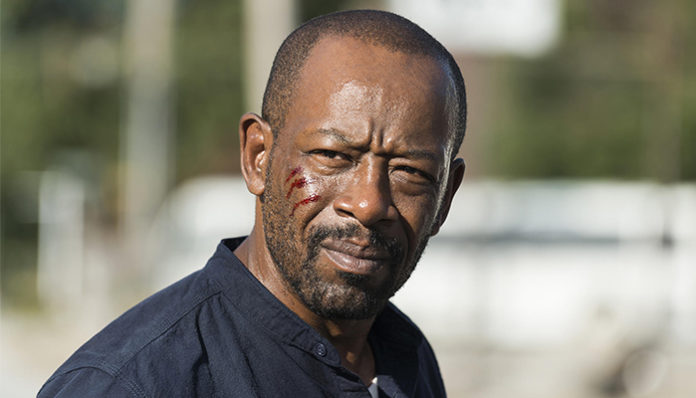 An English actor, Lennie James is best recognized as Morgan Jones on the post-apocalyptic horror series, The Walking Dead. A graduate of the Guildhall School of Music and Drama, he made his official acting debut in the four-part series, The Orchard House in 1991. From there, he participated in a handful of additional shows prior to landing a supporting role in the crime drama, Out of the Blue (1995). Still, it wasn’t until the mid-2000’s that he started to garner more recognition in the CBS series, Jericho (2006).

Then, after a few more roles, James was cast as Morgan Jones on the AMC series, The Walking Dead (2010). Originally a guest character, he appeared briefly in the first few seasons, before coming back as a series regular in season six. In fact, his role has become so successful that he will be joining the cast of Fear the Walking Dead, the prequel, in 2018. As big of a deal as The Walking Dead is, however, the actor has also appeared in several other titles such as Hung (2010), Low Winter Sun (2013), and Critical (2015). This year, he even starred in the drama film, Double Play (2017).

As of 2017, Lennie James has played 70 different roles in both television and film. Surely, that means he’s doing quite well for himself? How wealthy is the English actor? According to sources, he currently has an estimated net worth of $6.5 million. How much of that is from his time on The Walking Dead? His other projects? We’ll be trying to answer these questions below.

How did Lennie James Make His Money & Wealth?

Born and raised in England, Lennie James was initially introduced to acting through a girl that he was interested in as a teen. Later enrolling at the Guildhall School of Music and Drama in London, he graduated in 1988. That same year, he made his television debut-not as an actor, but as a writer on the TV series, Screenplay. It wasn’t until a couple of years later, that he made his first acting appearance in The Orchid House (1991). From there, he was offered a supporting role in the crime drama, Out of the Blue (1995).

Many years after his acting debut, James was cast as Robert Hawkins in the action drama, Jericho (2006). His first time playing the main character, he was joined by actors Skeet Ulrich, Ashley Scott, Brad Beyer, and Kenneth Mitchell, among others. A string of other television appearances soon followed including, The State Within (2006), The Prisoner (2009), and Hung (2010).

In 2010, he was cast as Morgan Jones in the AMC series, The Walking Dead. Introduced in the first episode, he appeared as a guest a few more times, prior to returning as a recurring character briefly in season five. Finally, in season six, he was promoted to being a series regular. One of the most popular shows that he’s participated in, his portrayal has already earned him a few accolades including nominations for a Gold Derby T Award and a Fangoria Chainsaw Award.

Obviously, the actor would have yielded a decent amount of earnings from the show- even if he hasn’t been on the screen the entire time. With that said, his earnings per episode have, unfortunately, not been revealed to the public.

On top of his successful television career, James is also active on the big screen. Just this fall, he co-starred in the neo-noir science fiction film, Blade Runner 2049 alongside Ana de Armas, Sylvia Hoeks, Robin Wright, and Mackenzie Davis. Released in theatres on October 6, 2017, the movie has already pulled in over $255 million at the box office to date. But that’s not all that he’s done this year- earlier, he also starred in Ernest Dickerson’s drama film, Double Play.

Aside from his acting career, it should also be noted that James also works as a playwright and writer. For instance, he is currently working on an upcoming TV series titled, Save Me. In the past, he had also written for a play called, The Sons of Charlie Paora. Taking that into consideration, it’s probably reasonable to say that he has more than one stream of income. In the recent years, however, we wouldn’t be surprised if most of his earnings came from his work on television.

Lennie James has been married to his wife, Giselle Glasman for many years.

Does Lennie James Have Any Children?

Yes, the actor has three children with his wife, Giselle- three daughters named Rome (b. 1990), Georgia and Celine (b. 1994). The twins are currently studying at Ivy League universities.

Did Lennie James Go to College?

After completing school at Ernest Bevin College, Lennie James went to the Guildhall School of Music and Drama in London, England, where he honed his acting skills; he eventually graduated in 1988 at the age of twenty-three.

What is Lennie James Famous For?

Lennie James is perhaps best known for his portrayal of Morgan Jones on the popular TV show, The Walking Dead. For his contributions to the show, he had won an Online Film & Television Award in 2013.

Starting next year, he will be joining the cast of the prequel, Fear the Walking Dead.

Originally from Nottingham, England, Lennie James currently resides in Los Angeles, California with his family. Having said that, he spends most of his time in Georgia, as that is where The Walking Dead is filmed.

Unfortunately, we do not have any images of Lennie James’ house at this time.

What Kind of Car Does Lennie James Drive?

At this time, we do not have any information on Lennie James’s vehicle.

How Much Money Did Lennie James Make Last Year?

We do not have any information on Lennie James’ 2016 earnings at this time.

As of 2017, Lennie James still plays the part of Morgan Jones in The Walking Dead (he was promoted to being a series regular back in the sixth season). Recently, however, it was announced that his character will be joining the cast of the prequel, Fear the Walking Dead which premiered in 2015. A companion series, he will be making his debut in the fourth season.

Aside from The Walking Dead, the actor also served as the narrator for the British documentary, The Met: Policing London (2017) this year, which centered around the Metropolitan Police Service. On film, he also appeared in the titles, Double Play (2017), and Blade Runner 2049 (2017), as mentioned earlier.

Unfortunately, it does not look like the English actor is active on social media at the moment. Should he join in the future, we’ll update this section with his username and handle.