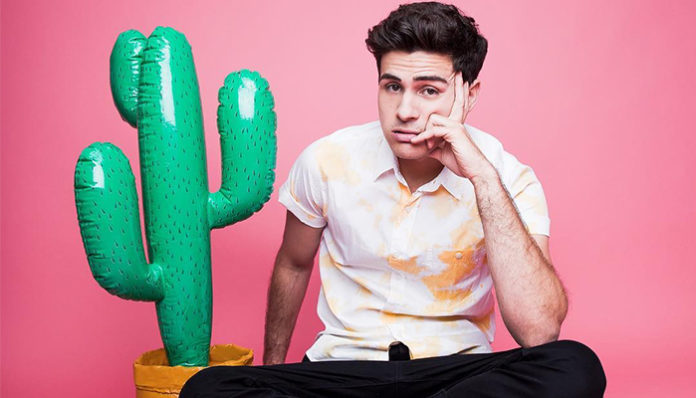 An Internet celebrity, Anthony Padilla is best known for having co-founded the sketch comedy channel, Smosh, with Ian Hecox in the early 2000’s. As it happened, the franchise had begun in 2002, when he built a website called smosh.com, one that featured several Flash animations. As it grew in popularity, he eventually launched a Youtube channel to which he uploaded several lip-syncing videos with his friend, Ian. Before long, the friends had gained a considerable following on the site.

Over the next several years, Padilla continued to contribute to the channel, which has since diversified to include various skits and video series. It wasn’t until 2017, that it was announced that he’d be leaving Smosh to pursue other independent opportunities.

Since his departure, he has been focusing his attention on his own Youtube channel, which has accumulated over 2.5 million subscribers to date.

As the (former) co-founder of Smosh, how wealthy is he? According to sources, Anthony Padilla currently has an estimated net worth of $8 million. How much of this came directly from his time as a member of the sketch comedy duo? What other projects does he have? Let’s take a look below.

How did Anthony Padilla Make His Money & Wealth?

Born on September 16, 1987, in Sacramento County, California, Anthony Padilla launched the Smosh franchise in 2002, when he built the website, smosh.com. It wasn’t until 2005, that he decided to launch a Youtube channel with his best friend, Ian Hecox. Working together, their first few videos featured them lip syncing to various theme songs (e.g. Teenage Mutant Ninja Turtles, Power Rangers, Pokemon, etc.)

Quickly, they gained themselves an audience on Youtube. From there, Smosh began to diversify over the course of the next few years. Instead of just lip syncing videos, they started to put together other content including comedy skits, and video series. Before long, they had become one of the most popular channels on the site with billions of video views altogether.

Fast forward many years, and it was announced in June 2017, that Padilla would be leaving Smosh to pursue other independent opportunities. How much had he earned over the years from their various endeavors? Unfortunately, it’s hard to say. With that said, it’s no secret that their Youtube channel is one of the most popular on the site, has been yielding millions of dollars annually for many years. The question is, how much of it fell into Padilla’s pocket?

Since his departure, Padilla has been re-focusing his attention on his own Youtube channel, which currently has 2.5 million subscribers.

Aside from his online projects, what else is included in his list of achievements? Well, for one thing, he’s produced several series over the years including Just Shut Up!, 16-Bit High School, and Part Timers. In 2016, he even lent his voice to Hal in the animated film, Angry Birds, a gig that would have obviously yielded him a decent amount.

Since 2015, Anthony Padilla has been dating fellow Youtuber, Miel Bredouw.

In the past, he was engaged to Kalel Cullen from 2013 to 2014. Prior to that, he had also been romantically involved with Kristina Carrillo-Bucaram.

Does Anthony Padilla Have Any Children?

Did Anthony Padilla Go to College?

After finishing high school, he went to American River College in Sacramento, California, though he dropped out after a couple of years.

What is Anthony Padilla Famous For?

Anthony Padilla is best known for having co-founded the comedy sketch duo, Smosh, in the early 2000’s.

We do not have much information on his location at this point in time.

What Kind of Car Does Anthony Padilla Drive?

We do not have any information on Anthony Padilla’s car.

How Much Money Did Anthony Padilla Earn Last Year?

At this time, we do not have any information on Anthony Padilla’s 2017 earnings.

Last summer, it was announced that Padilla would be leaving Smosh after over ten years of working with the sketch comedy channel. Since then, he has been pursuing other independent opportunities, one of which includes his personal Youtube account.