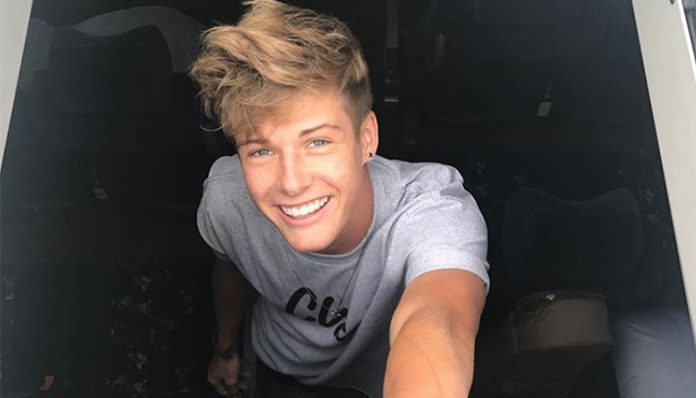 A social media star, Blake Gray originally gained an audience on the live broadcasting platform, YouNow. Since then, his popularity has only grown at an astounding rate- today, he also has a substantial following on Instagram, Musical.ly, YouTube, and Twitter. On Youtube alone, he has amassed over 360,000 subscribers in the past two years!

Like most online celebrities, the teen has done numerous collaborations throughout his career. In fact, he had participated in the Magcon Tour alongside Hunter Rowland, Corbyn Besson, and Random Rowland, among others in 2016. For a brief period, he even dated fellow YouTube star, Baby Ariel.

As you’re probably already aware, I’m sure, it’s not uncommon for someone to be able to make a decent living off of social media alone, nowadays. With that said, how successful is the 17-year-old, considering his different online ventures? How rich is he? According to certain sites, Blake Gray’s current net worth is approximately $100,000. What is his greatest source of income? How much of his wealth comes from Youtube? Let’s try to figure it out below.

How did Blake Gray Make His Money & Wealth?

Born on January 9, 2001, in Houston, Texas, Blake Gray grew up playing a number of sports including football, basketball, and baseball. The younger of two siblings, he has an older brother named Austin whom he’s incredibly close with.

In early 2015, the teen decided to get involved with social media through YouNow, a popular live-broadcasting platform. With his quirky personality and good looks, he quickly gained himself a following on the site.

From there, he eventually joined Youtube in 2016. Quickly taking to the site, he began filling his channel with a variety of videos from vlogs, to challenges. To date, his most popular upload, Sorry Mom…We Kissed has generated close to 4 million views. Some of his other top videos include Muser Olympics…Loser Streaks, Whisper Challenge with Baby Ariel, and Grind On Me.

How much has the teen banked from his Youtube videos so far? Given that he’s a Google partner and that he makes at least $2 per 1,000 views, he would have made close to $10,000 already (before Youtube’s cut).

As Gray continues to fill his channel with new content, his subscriber count will surely rise; with that his following, and ad earnings will also go up. In fact, according to statistics provided by Socialblade, his channel currently grows by a few hundred new followers a day. At this rate, his income from Youtube is bound to increase.

Throughout the years, he has also collaborated with many other social media stars. In fact, he had participated in the 2016 Magcon Tour, alongside Hunter Rowland, Corbyn Besson, and Brandon Rowland, among a few others.

As far as other sources of income go, he also has an official merchandise store at shopblakegray.com. Looking at it now, he has a variety of products for sale including hoodies, hats, shirts, posters, and more.

As far as we know, he is currently single. Up until 2017 however, he was in a relationship with fellow YouTube star, Baby Ariel.

Does Blake Gray Have Any Children?

No, Blake Gray does not have any children.

Did Blake Gray Go to College?

Currently seventeen years old, Blake Gray is still finishing up high school. At this time, it’s unclear whether or not he will be attending college after his graduation.

What is Blake Gray Famous For?

Blake Gray initially rose to fame on YouNow in the mid 2010’s. Since then, he has also made a name for himself on Youtube, Instagram, Musical.ly, and Twitter, to name a few.

Blake Gray currently resides with his parents in Houston, Texas. Further details on his location are unavailable at this time.

What Kind of Car Does Blake Gray Drive?

Information on Blake Gray’s vehicle is unavailable at this time.

How Much Money Did Blake Gray Earn Last Year?

For the most parts, the teen has been busy updating his social media accounts. As far as we know, he did not embark on any tours in 2017.

If you’re a fan, you definitely want to follow Blake Gray on social media. Luckily for us, he’s active on multiple platforms including Twitter (@BlakeGray), Instagram (@BlakeGray), and Musical.ly (@BlakeGray). While you’re at it, don’t forget to also subscribe to his Youtube channel, which you can visit by clicking here.