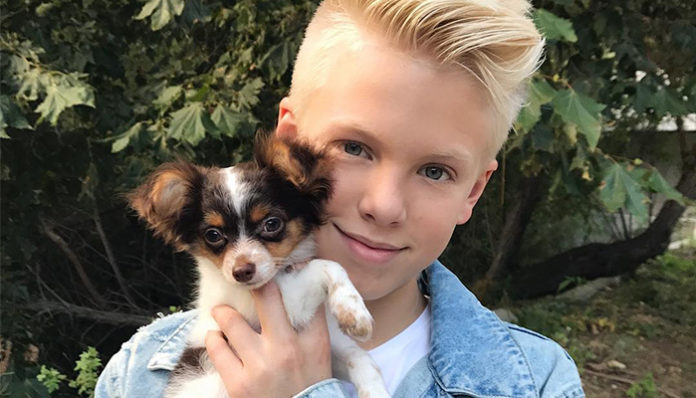 A talented musician, Carson Lueders has been playing the guitar ever since he was five years old. As much of a singer as he is a guitarist, he eventually began to upload cover songs to Youtube, all of which have proved to be incredibly popular. Some of the artists that he has covered in the past include Shawn Mendes, Ed Sheeran, and Cody Simpson, to name a few. To date, his self-titled channel has amassed more than 750,000 subscribers (and counting).

Since his rise to fame on the video-sharing platform, the teen has released a few singles including Try Me and Feels Good, both of which received rave reviews from fans. In 2015, he also dropped his long-awaited EP, All Day. Assuming that he’ll continue to release new songs, his music career will only be taking off from here.

Now for the big question- how rich is the 16-year-old? About how much as he earned from his various endeavors? According to various sources, Carson Lueder’s net worth currently stands at approximately $1 million. Did the majority of these funds come from his record sales? How much of it came from his Youtube channel? Let’s find out below.

How did Carson Lueders Make His Money & Wealth?

Born on July 26, 2001, in Spokane, Washington, Carson Lueders has been playing the guitar ever since he was five years old. The son of Diane and Jon Lueders, he has two siblings- a brother named Jackson and a sister named Olivia.

Having gravitated toward music almost his entire life, he decided to promote his work on musical.ly in the early 2010’s. Instantly taking off, it didn’t take long for him to gain himself a considerable fan base on the video-sharing platform.

Around that same time, he created himself a self-titled Youtube channel- which he also used as a platform for his music. Throughout the years, he has covered the songs of many artists including Ed Sheehan, Cody Simpson, and Shawn Mendes, to name a few. As of 2018, the teen has amassed over 765,000 subscribers, with more than 98 million views combined. His most-viewed video to date, Take Over (Official Music Video) has generated over 8.6 million views since it was first uploaded in 2015.

With the views that he receives on the site, how much has he pocketed from his channel so far? Given that he makes at least $2 per 1,000 monetized views from Google, he would have already made close to $80,000 from his videos altogether- not too bad for a 16-year-old! As his subscriber count continues to go up, it’s likely that his ad earnings will also follow suit.

Aside from what he’s shared on Youtube, he has also released a few singles including Try Me and Feels Good, both of which were met with positive reviews. In 2015, he also released his first extended play titled, All Day.

As far as other endeavors go, last year he was also cast in the Youtube series, Chicken Girls starring Annie LeBlanc, Hayden summerly, and HRVY, among a few others.

No, he is not married (he’d be too young to anyway). As far as we know, he is currently single.

Does Carson Lueders Have Any Children?

No, the young singer does not have any children.

Did Carson Lueders Go to College?

Still, in high school, it’s unclear for now whether or not Carson Lueders plans on attending college in the future.

What is Carson Lueders Famous For?

Carson Lueders is perhaps best known for his self-titled Youtube channel, on which he has accumulated over 750,000 subscribers to date.

He currently lives with his parents and siblings in Washington. Further information is unavailable at this time.

What Kind of Car Does Carson Lueders Drive?

How Much Money Did Carson Lueders Earn Last Year?

For now, it’s hard to say how much Carson Lueders had earned in 2017.

Last August, the teen dropped his latest single titled, Remember Summertime via iTunes. That same year, he has also released Feels Good and Try Me. Looking at his official website, he had also been putting on several shows across the United States over the past few months (and will be continuing to do so in 2018).