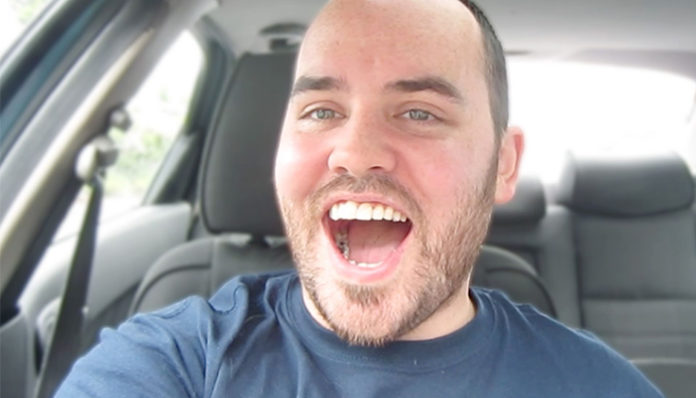 A Youtube celebrity, Jonathan Saccone-Joly is best known for his channel SacconeJoly, where he vlogs about his family life. A father of three, he often features his children Alessia, Eduardo, Emilia, as well as his wife Anna, in his videos. Originally from Ireland, he first joined the video-sharing platform in the winter of 2009.

As of 2018, his videos have earned him over 1.8 million subscribers on the site, with more than 709 million views altogether. Currently, his most popular uploads include Lives Changed Forever, Swimming in the Rain, Everything Happens for a Reason, and Truth About the Baby. If anything, the family has only increased in fame over the past year. In 2017 alone, they had gained more than 200,000 new subscribers.

How profitable is their Youtube channel? How much do they make from the ads displayed on their videos? How wealthy are Jonathan Saccone-Joly and his family? According to sources, their net worth currently stands at approximately $1.2 million. How much of this fortune came directly from their vlogs and comedic videos? Do they have any other projects going for them? Let’s take a look below.

How did Jonathan Saccone-Joly’s Make His Money & Wealth?

Born on February 13, 1980, in Ireland, Jonathan Saccone-Joly grew up with three siblings, Leah, Simon, and Ruth. Unfortunately, not much is known about the Youtuber’s early life at this time.

Ultimately, it was in the late 2000’s that he first started to get involved with Youtube. As it happened, he initially helped his wife with her beauty channel in 2008; it wasn’t until a year later, that he decided to set up his own channel.

Creating his current account, he decided to do a week-long experiment- to film and share his life every day for a week. Before he knew it, however, the experiment had turned into a lifestyle. Today, he regularly shares his family’s lives with fans on the site, from important moments to comedic videos. As of 2018, his work has gained him nearly 2 million subscribers, with more than 700 million combined views.

To date, his most popular video, Lives Changed Forever has generated over 4.7 million hits. Some of his other top uploads include Meet the SacconeJolys, Swimming in the Rain, We Built a Water Park, and We’ve Got Some News, all of which have received millions of views each.

How much have they earned from their Youtube channel so far? Assuming that they receive upwards of $5 per 1,000 ad views, the fact that they have 708 million views would translate to earnings of approximately $1.4 million (before Google’s cut).

In addition to their family channel, the Youtuber also has his own personal channel under the name, JonathanJoly. Though not as popular as the former per se, he has amassed over 365,000 subscribers to date with more than 23.5 million views altogether. Assuming that he has also been monetizing its videos, he would receive another steady stream of income from said account.

As of 2018, the most popular video on his personal channel, Harlem Shake (Puppy Edition) has been viewed over 7.7 million times.

He has been married to his wife, Anna Saccone-Joly for many years.

Does Jonathan Saccone-Joly Have Any Children?

Yes, he has three children with his wife, Alessia, Eduardo, and Emilia.

Did Jonathan Saccone-Joly Go to College?

At this time, it’s unclear whether or not Jonathan Saccone-Joly has gone to college.

What is Jonathan Saccone-Joly Famous For?

Jonathan Saccone-Joly is best known for his family’s Youtube channel, LeFloofTV, on which he uploads various vlogs and comedic videos. As of 2018, they have amassed more than 1.8 million subscribers.

Jonathan and his family currently reside in Ireland. Further details on their location are unavailable at this time.

What Kind of Car Does Jonathan Saccone-Joly Drive?

How Much Money Did Jonathan Saccone-Joly Earn Last Year?

At this time, we do not have any information on Jonathan Saccone-Joly’s 2017 earnings.

Last spring, his wife gave birth to their second daughter, Alessia Francesca on March 30, 2017. As far as his Youtube channel goes, he has of course, also been diligently uploading new content to the page on a regular basis.

If you’d like to stay up-to-date with the Youtuber, why not follow him on other platforms? For instance, you can find Jonathan Saccone-Joly on Twitter at @JonathanJolly or on Instagram at @Jonathanjoly. Of course, you can also drop by the family’s official Facebook rampage at @JonathanPatrickJoly.