Meet Richard Elden, from Manhattan Beach, California. He was born and raised in London and lived there up until his parents’ divorce when he was nine years old. His mother decided to move the family to California to seek a better life. America is truly the land of opportunity – if you have the passion and don’t take no for an answer, this is the place to be in. Richard’s big break came when California decided to pass legislation to ban plastic bags. Big retailers started to take notice, and his company has become a real success.

He has tons of orders, which is a great thing, but he never seems to have enough money to keep up. If he can’t fill those orders, his competitors will, and he can’t let that happen. He needs lots of money and needs it now, and he is dedicated to making this a huge success. He knows he can do it with an investment from the Sharks. So, he has come to the Shark Tank in order to seek an investment of $350,000 in exchange for 5% equity in his company, Dbest Products. After Richard introduces his business, he lifts out 110 pounds of concrete from a tote that he wheeled into the Tank.

DBest Products are your one-stop shop for all your card needs. He wants to show the Sharks why everyone calls him The Cart Guy. Smart Cart, which weighs less than three pounds and holds 110 pounds, folds up to only be two inches big. Wow! It has a convenient front pocket, and it envelopes because it’s waterproof. It has an ergonomic curvature in the handle because it allows you to pull more weight with less effort, and it’s got a convenient strap handle to go up and down the stairs and in and out of the car, or in and out of the overhead compartment on a plane.

There are a ton of different Smart Carts, and there is even a pet Smart Cart. It’s luggage-style maneuverability with a pet carrier. He has also developed the Trolley Dolly, which has seven different pockets and compartments. The bag slides off and it turns into a dolly and can hold up to 150 pounds. Carts are not just for groceries anymore, and Richard demonstrates a video of the cooler Smart Cart. You use carts for coolers today, and they even have seats so you can take them out to picnics. There is even a stair climber, which lets carts be pulled in houses and upstairs.

Richard says that he needs money, and he doesn’t want just any money – he wants smart money. He wants a smart partner that can help him get into more retail and more markets. So, which Shark will be the smart one and join him with his Smart Cart? 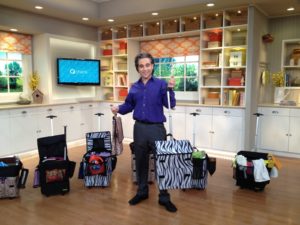 Kevin doesn’t sugar coat things – should he beat Richard up now or later for that $350,000 investment offer? Richard says that he can beat him up now, but Mark intervenes and asks for sales. Sales this year are $5 million and are projected to do between $7 and $8 million by the end of the year. They did only $2.5 million last year. Kevin asks where these sales are coming from, and Richard says that he is doing both. They are selling to Bed Bath & Beyond, Staples, Hobby Lobby, and a few more. Daymond says that Richard is projecting $8 million in sales, so what is he here for?

All of the Sharks ask why Richard needs money. He explains that from $2.5 million to $7 and $8 million, he has to fund the inventory himself. It’s his company and he’s 100% owner, but he’s not desperate enough to pay those ridiculous rates at the bank. The banks are charging him more than 18%, and Robert asks why he doesn’t take the interest. Kevin then asks what the gross margin is, which Richard reveals is 50%. The profit, pre-tax, has been $250,000 off $2.5 million in sales. Robert asks why the profit was only 10% when the gross margin is 50%.

Richard explains that they do trade shows, he has payroll, and he has to pay for his warehouse. Robert then asks what Richard will do with the $350,000, what happens tomorrow? Mark says that the business is growing and the Sharks are financing it. With that money, the Sharks can be partners and invest in his business. The Sharks feel differently, saying that 5% ownership is not a partnership. Richard offers to open it up and go bigger. He has an order that is not part of the valuation for almost $3 million from QVC. 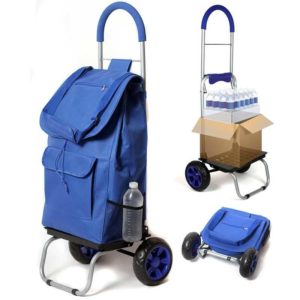 Lori is shocked and says that as she’s watching the Smart Cart demonstration, she has seen so many products like this. Mark asks to see the order, and Richard understands – it’s hard to believe. Lori asks how many times Richard has been on QVC, and Richard says that he has been working with QVC for probably 16 to 17 years. He has owned his company for 15 years. Mark asks him to back up – he has been in business for 15 years, so what changed to cause him to go from nothing to $2.7 million last year?

Richard started the company with the Quick Cart. The Quick Cart sold on the TV Shopping Networks for 8 and a half years. In 2010, he developed the Smart Cart. He decided needed a new product and one that works. The reason he came up with the Smart Cart was that California passed legislation banning plastic bags. He knew at that point that he wanted to develop a cart that weighed less, held more, folded thinner, and more. Daymond asks if this is the biggest-selling product he’s had throughout the entirety of his career and explains that the way the Sharks view it, Richard is here for some money to help finance ongoing orders and grow the business.

Daymond will be the first to extend an offer. He offers the $350,000 in exchange for 15% and promises to take him to Samsung. This means warehousing, shipping and distribution, returns, and things like that. When they get a billion dollars in orders, they can finance it. Kevin also extends an offer of $350,000 in a line of credit. He can draw it down as he wants it but the rate is 18%, and he wants 5% equity. Mark explains that Kevin has not solved his problem. He will draw the rate out quickly and run out of resources. Richard speaks up, explaining that in those old commercials with the bouncing balls over the words, he sees some semblance of that in Richard’s presentation. He is out of the deal.

Lori says that Richard is in her world, so she extends an offer of $350,000 in exchange for 15%. She knows her value and how different things will be with QVC. Mark interrupts, but Kevin urges him to let Lori do what she wants unless he intends to make an offer. He explains that Richard needs capital, but the question is what comes next. Lori knows the business, but he doesn’t know the business at all. Mark has no trouble offering $1 million in a line of credit, so if Lori thinks the business is legit, Mark offers $350,000 in exchange for 20% and a minimum of $2 million in financing at 15% simple interest. Both Lori and Mark would go in on this deal together. 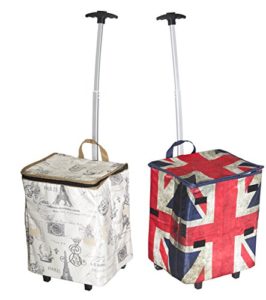 With this deal, Richard gets an immediate access to liquid capital. Richard seems a bit taken aback, but Mark points out that he has orders he can’t fulfill and stores that he can’t get into. So even though he takes a larger equity loss, it values the company at $1.5 million. Kevin then says that the company is worth at least $4 million, but Mark asks how many sales that Richard has that he cannot fulfill. At this moment, he is losing $1 million in sales. When he gives up that extra 20%, does the value of the company increased by more than 25% because he can take those sales?

The sale includes Lori, so the orders can double and triple. He’s going to sell so much more, so he needs more money. Richard begs for a lower equity position, but Robert asks how much equity he would want. Richard wants more money for higher equity. Daymond then speaks up, saying that he is out of the deal. Richard offers $700,000 for 10% and… he starts to lose the Sharks. Robert says that the longer he stands there, the more he risks losing the offer. Richard finishes $700,000 for 15% to his dream team of Lori and Mark. This would include the credit availability. 15% for both Lori and Mark is tough. They will not counteroffer or even budge on their position.

In the end, Richard agrees to take the offer with Lori and Mark, although he feels that the deal is way too much equity for not enough money. This was an incredibly tough deal to make, but now, Richard stands to have all the resources to grow DBest Products exponentially.

With Lori and Mark by Richard’s side, DBest Products has blown up. They have an unbelievable amount of products listed on their website, most of which serve as conversion devices. These include laundry carriers, the aforementioned Trolley Dollys, the Smart Carts, and a whole lot more. There are many designs and patterns available for each product. On top of that, the price has dropped from around $50 for a higher-end version of the Smart Cart to around $50 per Smart Cart.

Numerous items are listed as sold out on the DBest Products website, which is a great sign. At the time of writing, the downswing of the holiday shopping season is happening, so this likely means that many, many Smart Carts were gifted this past holiday season. You can purchase Smart Carts either directly from the website, or you can go to any number of other retailers, including Amazon (which includes Prime shipping!) Other places that carry Smart Carts include Bed Bath and Beyond, local college bookstores, Staples, Target, Walmart, PetCo (although PetCo only carries the variant which is a pet holder) and a whole lot more. Forbes even wrote an article, praising the innovation of the cart. On Amazon, the Smart Cart has a stellar 4.5 review of more than 2,000 reviews. Richard is really helping to revolutionize personal item transportation.