Stepping into the Shark Tank is an entrepreneur with a business that’s set to expand on a growing trend. Meet Abby Speicher from Scranton, Pennsylvania. Her company is DartDrones, and she has come to seek a $300,000 investment in exchange for 10% of DartDrones. Drones are cool – they’re the ultimate tech toy. You get the thrill of piloting something, while at the same time, capturing amazing aerial photographs. Unfortunately, shots like those don’t happen all the time, and far too often, you get something like this – the television cuts to an anecdotal video of a Drone crashing into a cliff.

The videos continue, and more and more collisions occur with people, buildings, and a whole lot more. All of the Sharks laugh at the montage. Accidents like those are embarrassing and expensive, and Abby has had it happen to her numerous times. People love drones but don’t know how to fly them properly. They fly where they shouldn’t, or they crash into objects. Abby believes that pilots should get the most out of their drones, and this is why new pilots turn to DartDrones.

DartDrones is the only national drone training school in the country. They offer custom-tailored courses whether you’re a drone entrepreneur or just a recreational user flying for fun. Their expert flight instructors have over 250 years of combined aviation experiences and provide expert, hands-on flight instruction. They are the leading flight experts in getting people signed, trained, and certified for their drone. With the help of the Sharks, all of them can take off with DartDrones.

Robert steps up and asks if he can fly it, as he has never flown a drone before. Abby instructs him; when he flies, he has to put both fingers in and the props will turn on. The props will spin, and Robert can wait since they won’t take off. The left joystick takes the drone up or down, and with the right stick, Robert will fly. Abby instructs him to go up, over to the landing pad, and move the stick down. Hold down the stick, and the propellers will turn off. Abby tells Robert not to crash into the TV. Robert does not even start the propellers on the drone. 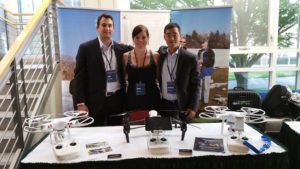 Kevin narrates the experience the entire time, having flown a drone himself before. Abby instructs him to fly the tethered drone. He pulls too far away, pulling the tether with the drone, before managing a smooth landing on the decal pad. Robert jokes that Abby seemed more nervous than he was. Abby admits that she was super nervous for Robert. Robert admits that it was cool and he intends to buy a drone. Abby continues on – it seems easy at first, as she was instructing him to take it easy, but other people take their drones right into a tree. Robert admits that he would have definitely done that.

Kevin then asks if they are able to train people to fly a drone when it’s out of sight. This is the goal, she says. If people can fly looking at the monitor and not the drone, then they have done their job. Kevin asks how long it takes for people to gain the skills to pilot like that. Abby explains that they currently have a one-day class for both hobbyists and people looking to fly commercially. Daymond asks how much that class costs, which is $400 for a full day, eight hours, in person. This is taught by 22 different instructors in 27 different cities. They rent hotel meeting rooms or schools or fire training locations. They make sure to have a huge field so they can rotate from indoor to outdoor. 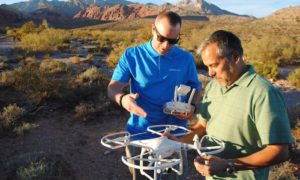 Daymond asks for sales, and over 18 months, they have made $520,000. This is strictly sales. Next year, they are on track to make between $900,000 and $1.2 million. Kevin asks how much this will make her after she pays everybody and the business taxes. Right now, Abby explains, they are spending all of the profit on building a new curriculum. Every time there is profit, they work on making themselves better. The business could be profitable if they stopped building the new curriculum. They could just sit back and enjoy it. Robert asks why they need the $300,000, and Abby says that they need it to build curriculum.

People in the classes were actually commercial users, so their company or police or fire department sent them. They have made the big shift to not focus so much on hobbyists but more on commercial users. Lori asks how Abby got into the business and what her background is. She says that she was born to be an entrepreneur. She started her first company when she was 17 and manufactured purses in Ghana, Africa. Those would then be sold in the United States and helped to fund education in Ghana.

At the end of college, she knew that she wanted to be an entrepreneur and do something innovative. She didn’t think that the purses were for her since she only ever owned maybe three purses. So, she decided to go to Babson for their MBA program. She applied, got in, and was the youngest person in her class. She ended up graduating and winning the B.E.T.A business planning competition. She graduated with an Entrepreneurship Award and several other awards. Lori then asks if Abby has competition.

So far, DartDrones is the only national company to certify and train would-be drone pilots. There are other companies out there, but one only offers an unaccredited Ph.D., which she does not get, and another company offers $4,000 for a seven-day course. Mark asks if any colleges or community colleges are offering it. Actually, several colleges have approached DartDrones to license their curriculum out. That was exactly the line of logic Mark was about to go down. 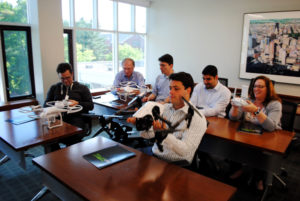 Daymond then says that last year, drones were the highest-returned product in history. More than 60% of drones purchased were returned because, for example, Dad would come home with a drone and hit the cat. The mom would then make dad get rid of the drone. If, for example, Abby had a relationship with Toys R Us, a hobby shop or whatever it is, it reduces the number of drones coming back to them and upsells the courses. So far, Abby has done things like that – she will partner with hobby shops in the area and even pay an affiliate fee if they promote them. This has been very successful and has been one of the more successful marketing tracts. In fact, the big plan is going after the one main manufacturer of drones.

If they had a little business card in every single box, that’s all that she needs. They would be good to go forever. Mark then says that things come down to customer acquisition – making the connection and getting the name out there. They need a better way to build the authority that they are the brand and they are trying to figure out the balance and way to do that without spending a fortune. Kevin then says that he has heard enough and will start the game off. He does not believe that DartDrones is worth $3 million. He offers $300,000 in exchange for 15%. This isn’t that far off.

Mark offers $300,000 for 10% but does not want to go through the song and dance. If she wants to work with him, say yes, otherwise, Mark defers to everybody else. Abby does not waste a single second and accepts the offer without hesitation. Lori did not even catch the offer, and she is blown away that the deal was struck that quickly. She looks annoyed.

Abby walks out of the Shark Tank with a huge smile brimming across her face. Of all the Sharks, Mark is the best techie choice. She is totally confident that Mark can help bring DartDrones to the next level.

DartDrones has expanded their lineup exponentially. Now, they have more than 30 different instructors giving courses in 40 different cities across 25 different states. DartDrones now offers a variety of classes, starting with Online Aerial Photography, ranging up all the way to a professional drone pilot package. Most of these classes are in-person but complemented by online coursework that must be completed before attending the class.

The prices are a bit high, but at least you’re guaranteed to not ruin a drone that you purchased for recreation. The aforementioned online aerial photography class starts at $100, and the professional pilot package is $1,450. The most expensive class offered is both the Aerial Roof Inspections Workshop and Aerial Mapping and Modeling Workshop, which both cost $1,490.

From what I could find in reviews for the workshops and courses, DartDrones is very highly accredited and praised. I wish I had some solid stats and numbers like Daymond did, but it’s safe to assume that after attending a DartDrones workshop, the expertise of the pilot goes up while the likelihood of returning the drone goes down. Drones are very much the future, so it’s expected to see schools and services like DartDrones pop up. Just remember that DartDrones is the original drone piloting school.