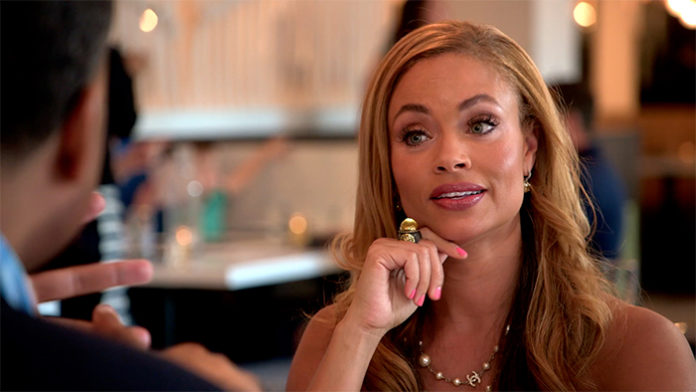 A reality star, Gizelle Bryant came into the limelight after being cast in The Real Housewives of Potomac. Responsible for her rise to fame, the show also featured Karen Huger, Robyn Dixon, Ashley Darbon, among a few others. Her introduction to the realm of television, RHOP remains to be her most prominent on-screen credit to this day.

Though she hasn’t appeared on television much outside of the Bravo series, she has been featured a few times in Watch What Happens, The Domenick Nati Show and Hollywood Today Live. Outside of the showbiz, she also has her own line of baked goods and makeup.

As one of the full-time casts of RHOP, how much was she able to negotiate in terms of salary? How much did she earn from the show? Or better yet, how wealthy is the socialite? From what we can gather, Gizelle Bryant’s net worth is currently estimated to be around $4 million. What contributed the most to her wealth? We’ll be trying to answer some of these questions below, so be sure to keep reading.

How did Gizelle Bryant Make Her Money & Wealth?

Born on September 9, 1970, in Maryland, Gizelle Bryant’s parents were often strict with her growing up. After completing high school, she studied at Hampton University; not long afterward, she married her husband, Jamal Bryant.

In 2016, the Maryland-native joined the main cast of Bravo’s newest installment of The Real Housewives franchise, The Real Housewives of Potomac. One of the network’s most-watched premiers, the first episode attracted over 2.5 million viewers in total in the U.S. Though viewership dipped in the subsequent weeks, the overall reception from critics was positive.

Unsurprisingly, Bryant stayed for a second season, as did most of her fellow cast-mates, with the exception of Katie Rost. Following a 14-episode run, season two wrapped up on July 17, 2017. Despite the rave reviews that it has received from fans, however, the show has not yet been renewed for a third season.

How much was the full-time cast member paid for her time on the show? Unfortunately, as much as we’d like to know, details regarding their contracts with Bravo have not been leaked to the public. For now, we can only make assumptions as to how much their salaries were.

Since her television debut in RHOP, she has also found herself invited onto the shows Watch What Happens: Live, Hollywood Today Live, and The Domenick Nati Show.

In addition to her television career, it’s no secret that she’s kept busy with her various business endeavors. For instance, she is currently working on developing her own makeup collection called EveryHue Beauty. According to her official bio on the Bravo website, the line will aim toward meeting the needs for women of color.

In the past, she even had her own line of baked goods available for sale at Timothy Dean’s restaurant, Timothy Dean Burger.

In the past, the reality star was married to Jamal Harrison Bryant, a well-known pastor in the Baltimore area, from 2002 to 2009.

Allegedly, the two had split up after he was found guilty of cheating.

Does Gizelle Bryant Have Any Children?

She has three children with her ex-husband, Adore, Angel, and Grace.

Did Gizelle Bryant Go to College?

Yes, she went to Hampton University in Hampton, Virginia.

What is Gizelle Bryant Famous For?

Gizelle Bryant rocketed toward fame after appearing in The Real Housewives of Potomac. Since the series wrapped up last year, however, she hasn’t appeared much on television.

Gizelle Bryant currently resides in her hometown in Potomac with her children. Further information on her abode is unavailable at this time.

What Type of Car Does Gizelle Bryant Drive?

Information on her vehicle’s make is unavailable at this time.

How Much Money Did Gizelle Bryant Earn Last Year?

Aside from having appeared on The Real Housewives of Potomac, she has been kept busy with multiple philanthropy projects. In addition to that of course, she also her various business ventures to take care of.

Wondering what the former RHOP star is up to? Why not stay connected with her via social media? You can find Gizelle Bryant on Instagram at @GizelleBryant or on Twitter at @GizelleBryant. For the latest announcements, don’t forget to also check out her official Facebook page here.