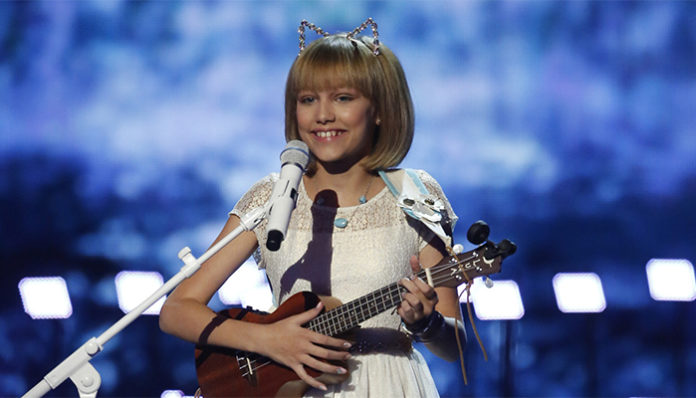 Hailing from New York, Grace VanderWaal rose to fame after winning the eleventh season of America’s Got Talent in 2016. A talented singer, she initially launched her music career on Youtube, where she had uploaded numerous original and cover songs. Still active on the site to date, the teen has amassed over 1.1 million subscribers as of 2018.

Following her win on the competition show, VanderWaal released her debut EP, Perfectly imperfect in late 2016. A considerable hit, it peaked at number nine on the Billboard Top 200, a sure feat for any thirteen-year-old. Since then, she has also dropped her first studio album, Just the Beginning, which gave rise to the charting singles, So Much More Than This, and Moonlight. Recognized for her talents, VanderWaal received a Teen Choice Award for Choice Next Big Thing and a Rising Star Award from Billboard in 2017.

How wealthy is the young star now? How far has she come since winning America’s Got Talent two years ago? According to various online sites, Grace VanderWaal has an estimated net worth of $2 million as of 2018. Where did the young teen’s fortune come from? What is she up to now? We’ll be looking at these questions below.

How did Grace VanderWaal’s Make Her Money & Wealth?

Born on January 15, 2004, in Lenexa, Kansas, Grace VanderWaal has been composing her own songs since the age of three. By the time she was eleven, she had learned how to play the ukulele and had begun to record both cover and original songs, which she posted to her Youtube channel. Some of her biggest musical influences include Katy Perry, Twenty One Pilots, and Jason Mraz.

In 2016, the aspiring musician decided to try her luck in the eleventh season of NBC’s popular talent competition, America’s Got Talent. Auditioning with her original song, I Don’t Know My Name, her performance ultimately led Judge Howie Mandel to press the golden buzzer, which brought her straight into the live quarterfinal round.

Carried by her natural talents, she eventually won the competition with one final performance of I Don’t Know My Name during the finale, making her the second female winner in the show’s history. As the winner of the competition, VanderWaal was given a cash prize of $1 million, which she later used to buy two tree houses for herself and her sister.

Eventually signing with Columbia Records in 2016, she released her debut EP, Perfectly Imperfect, later that year on December 2, 2016. Consisting of five tracks, it debuted on the Billboard Top 200 at number nine, with rave reviews from fans and critics.

Since then, the young singer has also released her debut studio album, Just the Beginning. Her first full-length project, it gave rise to twelve new songs including Darkness Keeps Chasing Me, Insane Sometimes, Escape My Mind, So Much More Than This, and Just a Crush, to name a few. An overall success, it went on to peak at number 22 on the Billboard Top 200.

In addition to record sales, the teen has also embarked on a few concert tours, all of which would have presumably yielded her a significant amount of earnings.

No, she is too young to be married.

Does Grace VanderWaal Have Any Children?

No, she is too young to have children.

Did Grace VanderWaal Go to College?

What is Grace VanderWaal Famous For?

Grace VanderWaal rose to fame in the U.S. after winning the NBC competition series, America’s Got Talent in 2016, at the age of twelve. Since then, she has released several albums, including Just the Beginning, which peaked at number 22 on the Billboard Top 200.

The young sister currently resides in New York with her parents.

What Kind of Car Does Grace VanderWaal Drive?

Gace VanderWaal is not yet old enough to drive.

How Much Money Did Grace VanderWaal Earn Last Year?

At this time, we do not have any information on Grace VanderWaal’s 2017 earnings.

For her contributions to music, she won a Teen Choice Award for Choice Next Big Thing last year.

If you’d like to follow the young star on social media, you’ll be happy to know that you can find her on Twitter at @gracevanderwaal, and Instagram at @GraceVanderwaal. On Facebook, you can also visit her official page at @GraceVanderWaalMusic, where she’s got nearly one million fans.